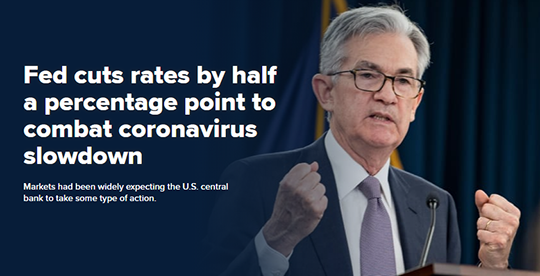 Yep, that’s the headline at CNBC with Fed Chairman Jay Powell looking decidedly haggard… and what’s with the double fists?

Anyhoo… the Fed’s decision this morning for a half-percent interest rate cut is not only headline-making but history-making — the first rate cut outside a regularly scheduled Fed meeting since October 2008.

CNBC further notes: “The move comes the same morning the G-7 announced that it would commit unspecified tools to help the global economy deal with the [coronavirus] threat, and as Wall Street was in the midst of another market sell-off.”

As to that “market sell-off,” the Dow was down 200 points at the opening bell; certainly not earth-shattering. What? A 1,200-point rally yesterday wasn’t good enough?

After the Fed’s announcement, the Dow erased its early-morning losses and spiraled up over 100 points… but that was so three hours ago. (A more current take on the market follows.) Trump, meanwhile, continues to pester for more “easing and cutting.” Oy.

For some much-needed perspective, we turn to our trade veteran with almost 30 years experience…

“Perspective is the name of the game right now,” says Alan Knuckman, who has a bird’s-eye view from the CBOE.

Even so, Alan understands “if you’re feeling uncertain about what’s to come” this week. To get a grip on investor uncertainty, he takes a glance at the CBOE’s Volatility Index that measures investor sentiment… 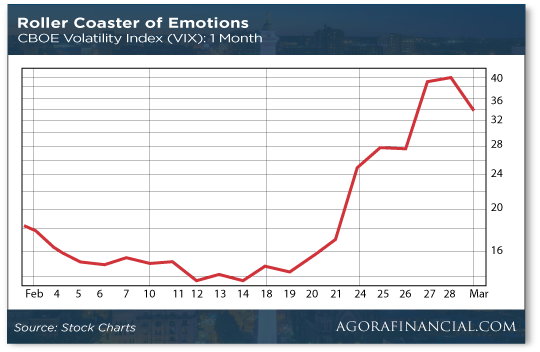 By Friday last week, “The VIX eclipsed highs of December of 2018, when stocks slumped on trade war worries,” says Alan. “During that time the S&P 500 slipped nearly 20% from its recent highs just a few months earlier.”

So investors were understandably apprehensive as they rang in the new year 2019. “But… stocks recovered these losses — and then some — a few short months after bottoming out.

Aha, you might say, that doesn’t jibe with current coronavirus jitters! For that, Alan takes us back to mid-November 2002 through March 2003, when SARS was monopolizing headlines.

“While investors were panicking about the SARS outbreak, the S&P 500 fell 12%,” he says. “But by the end of the year, the S&P closed 19% higher than where it started!

“And there are no signs that this time will be any different,” he says. “The market is simply paying back some of the profits from the recent rally… And more importantly providing us with more room to run once stocks finally stabilize.”

Even more important than relying on history to shine a light on stock market ups and downs is understanding what drives the market.

“It’s all about supply and demand,” Alan says. “Stock prices move up and down solely because of [it].

“No matter what a company’s sales or earnings look like… what its cash balance looks like… or what kind of assets it has on the books,” he says, “a stock is worth what someone is willing to pay for it.”

More people want to buy a stock than sell it? “Sellers… can raise [the stock’s] price as high as they want, so long as a buyer is willing to purchase it.

“If the opposite situation occurs — when there are more sellers than buyers in the market — a stock’s price will fall.”

Alan says the perfect way to picture these two competing forces — supply and demand — is to imagine a scale with 100 investors standing on it. The left side of the scale represents buyers while the right side represents sellers.

Of course, at any given moment, investors can shift to the buy side or the sell side. “If one day there are 75 buyers and 25 sellers,” Alan says, “there will be more weight on the left-hand side.” Share prices will be in the sellers’ favor.

“If there are 25 buyers against 75 sellers, the scale tips to the right.” And in the world of stocks, this would cause the price of shares to drop.

“Since the stock price moves up and down every second during a trading day, the scale is always imbalanced,” Alan says.

But that’s not a bad thing…

“I say volatility equals opportunity, because often the scale tips too far in one direction too quickly,” says Alan. “When this happens, we can exploit the imbalances.

“Specifically, when a… quality stock sells off on a rash geopolitical headline (like coronavirus)… we can grab options plays on a good company at a significant discount.”

This very idea is the core concept of most of the trades Alan makes. In fact, Alan doesn’t bother trading single stocks anymore; these days, he only trades options.

“Sure… it’s always better to put luck on your side by picking solid stocks,” he says. But considering last week’s stock slide lightened millions of investors’ pockets, for Alan’s readers, he says, “Our options expiring in March and April still have time value.”

Alan concludes: “Once the market ‘rebalances,’ we can sell those options for a healthy profit!”

[Ed. note: Every trading day, Alan sets his alarm for 9:29 a.m. He knows this 60-second window right before trading begins separates successful traders from those who fight for the leftovers.

Alan used this strategy during his days on the CBOE’s trading floor… and still uses it to this day.

And if done right, you might DOUBLE your money — or more — within a month, no matter if you’re a veteran trader like Alan or a complete beginner.

As long as you know what to do during this 60-second window, you’ll have a shot to profit just like the top traders on Wall Street.

“When you step back and look at the big picture,” says our income specialist Zach Scheidt, the cratered market last week “may not have caused as much damage as you would think.”

Echoing what Alan said earlier about perspective, Zach says: “Take a look at the overall chart of the S&P 500 below, which covers the time period from the beginning of our current bull market until now… 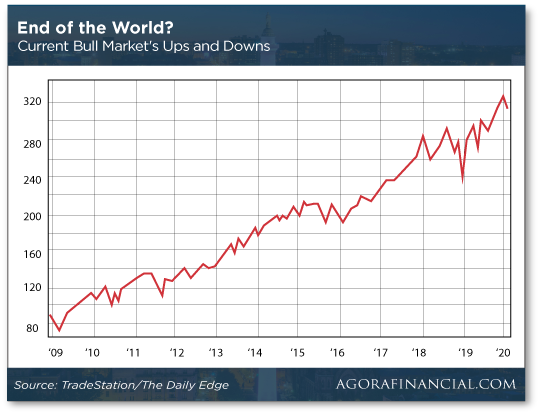 “As you can see, the February pullback is meaningful,” he says. “But it’s not all that abnormal compared with other pullbacks we have had along the way.

Zach says: “Each time, the market found its footing and patient investors were rewarded for sticking with their positions.”

Of course, while he doesn’t have a crystal ball, Zach believes there’s reason to be optimistic… not least of which, we’ve headed into a potential pandemic on relatively firm economic footing to begin with. “The U.S. economy has been growing steadily,” he says, “and the European economy has been showing encouraging signs of recovery.”

While Zach thinks the coronavirus has become a more “concentrated” obstacle for the market than originally anticipated, he’s hopeful things will shake out in a couple months when — speaking from common sense — warmer weather seems to curtail the cold and virus season.

If only Fed chair Powell were as measured as Alan and Zach; he’s handily put the market in a tizzy with comments he made at a presser this morning…

Stocks tanked immediately after Powell’s address when he said the coronavirus will be a drag on the economy “for some time.” Why his opinion is so authoritative — compared with anyone else’s — who knows? (Heh… for more on impersonating medical doctors, keep reading.)

Speaking of our favorite safe haven…

Workers renovating the grounds of an 1,800-year-old Indian temple happened upon a fortuitous find last week: 505 gold coins sealed in a brass urn and buried at a depth of seven feet. 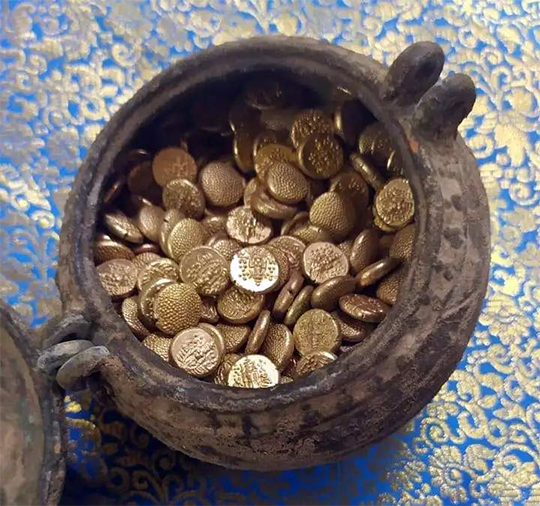 Hitting the motherlode in India

The coins — called “pagodas” — were minted by the East India Company in the 1600s and came in two versions, the Oru Swamy Pagoda (“One-God Coin”) and the Moonu Swamy Pagoda (“Three-God Coin”), referring to whether the Hindu god Vishnu was depicted alone or with two of his consorts.

A local numismatist says the coins are so rare that their value is five times greater than the current price of gold. He went on to ask that the coins be preserved for posterity in a museum. For now, the coins are being held at the district treasury.

Kudos to the exceedingly honest workers!

“Well, very unfortunately, my virus suspicions mentioned in the Feb. 12 episode of The 5 seem to be coming true,” writes a longtime reader.

“Said another way, the facts are starting to line up more and more with the actions — that this is far worse than was initially, and still, being let on.

“I’ve now seen reports that China was pumping out papers on how to handle infectious viruses made in their military labs in Wuhan — concurrent with the early days of the outbreak. Exactly what I would expect, an attempt at after-the-fact butt-covering.

“I’ll just leave this little video from Johns Hopkins (October 2019), which speaks for itself. ‘Event 201, hosted by the Johns Hopkins Center for Health Security, envisions a fast-spreading coronavirus with a devastating impact’

“Skip to the 10:05 mark for just the chilling highlights, which match with amazing accuracy what is currently happening at this stage, including comments about needing a ‘Marshall Plan’ and scrubbing social media of what they determine is fake news, or even shutting down the internet.

“Or if you need some levity after watching the end, start from 1:07 and see the doctor that looks like Mark Zuckerberg. (I’m channeling Pete Buttigieg, I mean Alfred E. Neuman. What? Me worry?)

“Big Tech has already kowtowed to censorship pressure in the past (and has shaped its software to fit its own internal biases), and there’s little indication, in the midst of the chaos, these companies won’t do it on a massive scale.”

Hmm. So was that Hopkins “doctor” a Zuckerberg look-alike… or was Zuck just playing one on TV?

P.S. I just checked up on Alan’s progress since the launch of his Daily Double Club at the first of the year. Check this out…

Alan’s exclusive group has been privy to 29 out of 33 winning trade recommendations during that time — including one just yesterday with 50% upside!