Behold, in yellow highlight, the Establishment media’s faith in the superpowers of central bankers… 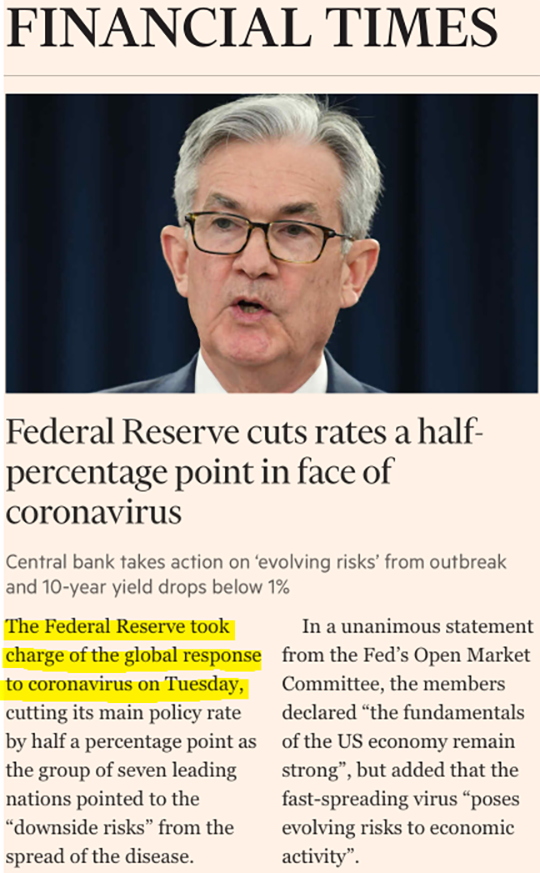 Yes, the Fed will save us from the plague!

If the World Health Organization is ineffectual… if the CDC looks helpless… if there’s no chance of aliens descending from the skies with a miracle cure… then the Fed must “take charge.” Can it be any other way?

As Emily noted in yesterday’s 5, the “emergency” rate cut is the first outside a regularly scheduled Fed meeting since the Panic of 2008.

But what does it accomplish, really?

“Remember, if you start to cough, don't bother contacting your regional central banker. He has no antibodies that work against a virus,” quips Agora founder Bill Bonner.

“As far as we know, no blind person has ever been made to see… nor has any lame person been made to walk… after visiting the Federal Reserve headquarters in the Eccles Building in Washington, D.C.

“Nor can central banks replace lost sales, wages or profits. All they have is fake money. And all they can do is add it to the financial system, in one way or another.”

Fed chairman Jerome Powell kinda sorta acknowledged his lack of superpowers during his news conference yesterday: “A rate cut will not reduce the rate of infection. It won’t fix a broken supply chain. We get that. But we do believe that our action will provide a meaningful boost for the economy.”

Wall Street bought the first half of that statement, but not the second; the Dow coughed up nearly 800 points by the close yesterday, offsetting the bulk of Monday’s 1,200-point rally.

Really, how is a rate cut supposed to provide a “meaningful boost for the economy” of metro Seattle — ground zero so far for the U.S. outbreak? “It’s like a ghost town,” a jewelry store owner in the Pike Place Market complex tells NBC News.

Also giving Wall Street the jitters: The Fed is giving itself precious little room to maneuver in the event of a garden-variety recession.

Back when the Fed was raising interest rates steadily during 2017–18, Jim Rickards was telling us the aim was to bring the fed funds rate up to maybe 3.75% — high enough that whenever the next recession rolled around, lowering the rate again would give the economy a meaningful boost.

As it happens, the Fed got to only 2.5% before Wall Street threw a hissy fit at the end of 2018 and a bear market loomed.

Now with yesterday’s cut, the Fed is already halfway back to the “zero-bound” rates of 2008–15. 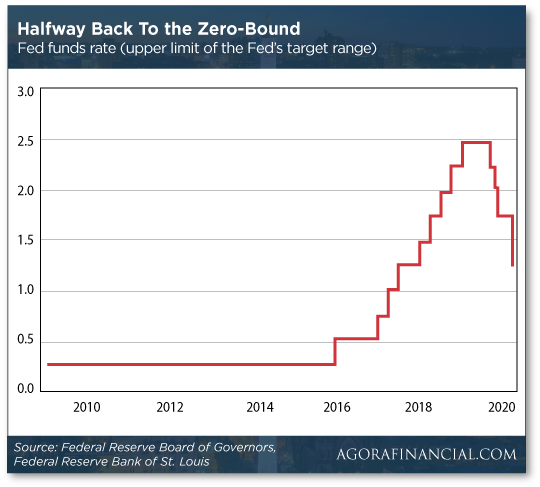 “We’re going to have a lot of risk-aversion on the part of economic actors,” the celebrity economist Mohamed El-Erian told CNBC last week. “It’s going to take time. Economic sudden stops are hard to restart.”

Thus, “I would continue to resist, as hard as it is, to simply buy the dip.”

Jim Rickards elaborates: “El-Erian says that buying the dip is too risky because the course of coronavirus is impossible to predict.

“It is possible that coronavirus will be contained through stringent quarantines and travel restrictions. It’s also possible that warmer weather will cause the virus to fade and infections to drop.

“But neither of those outcomes can be assured. For now, the virus continues to spread out of control and more developed economies are being affected including Italy, South Korea and Japan.”

Jim’s guidance for the risk averse: “Cash, gold and Treasury notes are all safe havens until the coronavirus pandemic dies down (if it does).

“‘Buy the dips’ may be serviceable market wisdom. But there’s another market saying: ‘Don’t catch a falling knife.’”

That said… if you don’t mind stepping out on the risk curve a bit, we remind you the Chinese word for “crisis” entails the concept of both “danger”… and “opportunity.”

And Jim says what’s happening right now amid the coronavirus scare could present the biggest opportunity of your lifetime.

He’s recorded a short video to tell you all about it. Watch it right here. Please note that he’s asking you to not share it with anyone. His publishers fear if it goes viral (in a manner of speaking), there could be consequences.

Meanwhile, Wall Street is in rally mode today… and even before the open we noticed a shift in the mainstream narrative...

Note the clever use of “as.” This is a favorite tool of financial headline writers. They think you crave an explanation for every blip in the markets (an insult to your intelligence), but they know in reality markets often do crazy things for any reason, or no reason at all.

So they resort to “as” (or “after”). Then you the reader unconsciously substitute “because.” Neat trick, huh?

Still, we won’t rule out cause and effect in this instance. The aforementioned Jim Rickards was part of a vocal minority who said the market meltdown last week was fueled by the rise of Bernie Sanders as much as by the spread of coronavirus.

The Dow is up more than 500 points as we write. Among the 30 Dow stocks, UnitedHealthcare (UNH) is leading the way, up 10%. Biden’s victories appear convincing enough that “Medicare for All” is looking like less of a threat.

Quite the reversal of fortune we’ve seen since the South Carolina primary on Saturday, observes our favorite political reporter…. 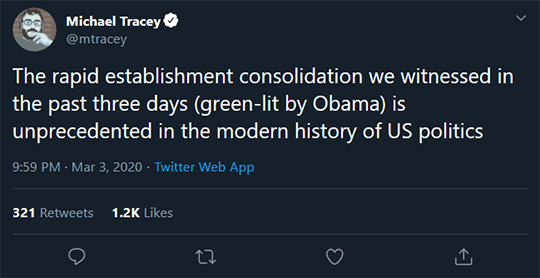 And that was before Michael Bloomberg dropped out of the race this morning and endorsed Biden.

Biden’s resurgence is indeed breathtaking — if not especially surprising: For all the leading Democrats’ caterwauling these last three years about the grave threat Donald Trump poses to our hallowed democracy… they’d rather lose with Biden than win with Sanders.

Gold is holding on to most of its gains after yesterday’s monster rebound, the bid $1,641 at last check.

Interestingly, Treasuries continue to rally even as stocks are rallying too. With prices still rising, yields are falling to more record lows — the 10-year note now 0.97%.

For perspective on the uncharted territory where we are now, the 10-year yield has smashed through the lows of both 2012 and 2016… 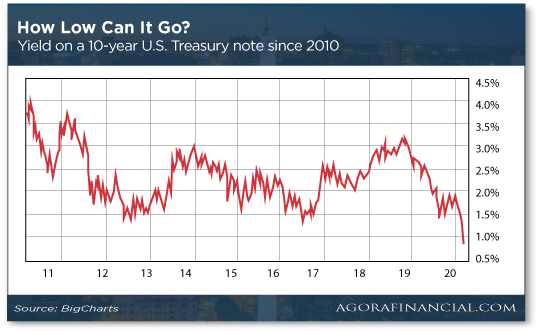 Elsewhere, crude is staging an impressive rebound — from below $44 on Monday to $47.22 now.

What if China weathers the coronavirus outbreak better than anyone expects?

That’s the thesis of a recent article by New York University economist Michael Spence. “The outbreak’s economic consequences will probably be substantial but transitory,” he writes at Project Syndicate.

Makes sense to our Nomi Prins, who turned us on to the article: “A major reason why is the strength of China’s digital economy,” she tells us. “As much as 35% of retail sales in China are done online. And their mobile-payments systems are the most advanced in the world. This will prove to be invaluable to China’s economy when facing a crisis that limits physical mobility.

“With this advanced digital infrastructure in place, many workers can work from home without affecting production. Also, online education can offset any closures of schools.

“Of course, travel and entertainment will suffer in the short term, not only in China but around the world. But they will probably recover in the Chinese economy along with the global economy as a whole over the long term.”

Back to the election and something we figured would happen sooner or later.

Eleven months ago, Twitter posted its “election integrity policy.” Among the provisions: “You may not use Twitter’s services for the purpose of manipulating or interfering in elections. This includes posting or sharing content that may suppress voter turnout or mislead people about when, where or how to vote.”

At the time we (half-) jokingly said if we had a Twitter account, we’d be banned in short order if we posted an image of the cover of P.J. O’Rourke’s book Don’t Vote: It Just Encourages the Bastards. (As we’re wont to do here in The 5 now and then.)

Fast-forward to yesterday… and look what happens to a leftist journalist (and, we’re guessing, Bernie supporter) named Jordan Chariton… 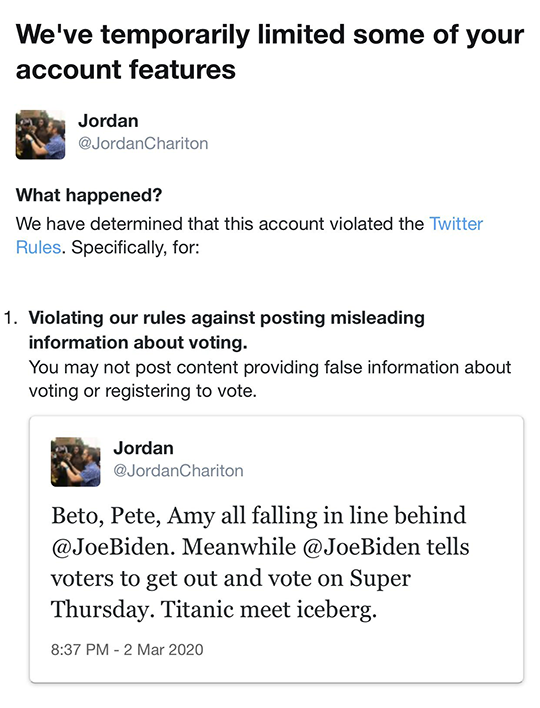 In case you hadn’t heard, during one of Joe Biden’s many “senior moments” in recent days, he urged voters to turn out for “Super Thursday.” 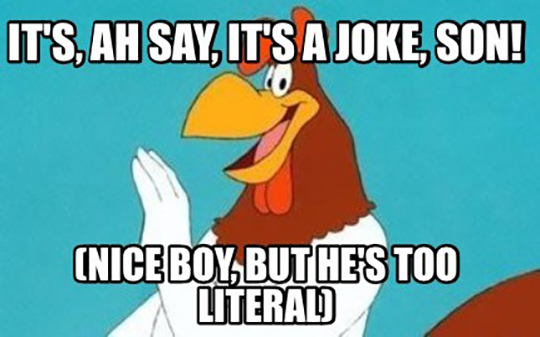 Maybe if Chariton had put “Super Thursday” in quotation marks?

Ugh… Anyway, it appears his account is fully up and running again.

“There are no coincidences. Jamie Dimon is just living a charmed life!” writes one of our regulars, after we noted last week how JPMorgan Chase wants to break the “stigma” of borrowing from the Fed’s discount window.

“Dimon is the last Wall Street CEO standing from the Great Recession. He is tough and admired, although he’s also a notorious interrupter and bad listener. But evidently he has impeccable timing.

“Virus-geddon was the perfect cover for Dimon and co. to start their liquidity lifeline with the Fed. Not that JPM’s balance sheet is anything less than fortress-like — but this detail gets lost in the current MSM narrative.

“It must be awesome to be so good or so lucky, or whatever Dimon is. I wonder if he knows something we don’t.”

“How do I access past issues of The 5 Min. Forecast?” a reader inquires.

The 5: Here’s the link to our voluminous archives, going all the way back to — well, not quite the beginning in 2007. The first four months or so never got posted.

As a reminder, each day’s issue is posted at the site within minutes of going out via email… so if your email account happens to get caught up in the unfortunate filtering issues we’ve suffered in recent weeks, you can always go there. Bookmark it now, we’d suggest.

P.S. As we go to virtual press, the coronavirus headlines are coming thick and fast…

With every new headline, the markets gyrate.

While many run scared, it’s at this moment Jim Rickards believes you could see the biggest opportunity of your lifetime.

How big? Jim tells you as soon as you click here. Watch this video now, because events are moving so quickly it could be out of date only hours or minutes from now.