It’s as if Matt Drudge is suggesting that tumbling interest rates might damage the “fortress balance sheet” that JPMorgan Chase’s CEO brags about — enough to put him in the hospital!

We kid — but not totally, in light of some other developments taking place beneath the surface this week.

We’ll get to that in a moment… but first, to more immediate and pressing matters… 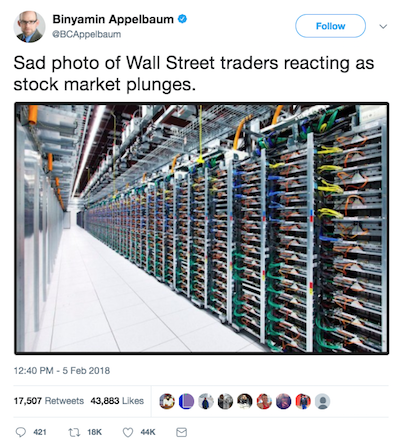 There’s more truth to that than perhaps he realized.

“In reality, 90% of stock trading today is done by robots and algorithms,” says our Jim Rickards.

“This has created efficiencies, lowering costs and enabling faster execution of trades… However, it has come at a high cost.”

Those costs usually stay hidden… until the market falls out of bed.

That’s when robo-selling begets more robo-selling. It’s no coincidence the stock market’s 10% descent into “correction” territory last week was the swiftest on record.

For perspective, Jim explains how things used to work: “When human buyers and human sellers enter orders on certain stocks in specified quantities, a computer system will match buy/sell orders to the extent possible. It’ll then execute those that match and send confirmations to the buyers and sellers or their brokers.”

You might not think there’s any real difference. After all, pilots do relatively little to fly jumbo jets these days — computers do most of the work.

“Whether to fly higher or lower to escape it is a task that computers can handle just fine,” Jim explains. “But stocks are different. There’s nothing objective or automatic about a stock price. There’s no stock ‘autopilot’ that makes good decisions in all cases.

“On the contrary, once you recognize a fundamental limitation of stock trading robots, it’s not hard to see why it’s possible for them to make very bad decisions.”

It comes back to the old computer saw about “garbage in, garbage out.” The algorithms are only as sophisticated as the prone-to-error humans programming them.

“On an uneventful trading day, when liquidity is plentiful, complacency is high, news is predictable and trading is range-bound, this isn’t necessarily a problem. In fact, because they are ‘dumb,’ these robots can actually reinforce such conditions through feedback loops.

“Unfortunately, these conditions are not a good description of reality. In the real world, liquidity disappears, complacency can turn to panic, black swans arrive and trading leads to spikes and crashes. In these circumstances, robots will reinforce the dysfunction and cause results humans would otherwise prevent.

“This is because humans have seen these things before. Humans (or at least some of them) can temper euphoria or overcome fear. This means selling when others are buying or stepping up to buy when everyone is selling. These human reactions are not irrational; in fact, they help signal that rationality is still around.

“Yes, humans are subject to a host of cognitive biases. The herd dynamic, for instance, can be dangerous when the herd is running for the exits. But it can be highly constructive when the herd decides to settle down. By bucking the trend, a human can set an example, gather adherents and turn the tide.”

At least right now, robots are terrible at bucking the trend.

Key point: “We can profit from robot stupidity by using accurate predictive analytics and front-running the algos.”

That’s the idea behind a short video message Jim recorded this week to address the market fright over the coronavirus outbreak.

While the robots are running scared, you can pounce on what might be the opportunity of a lifetime.

Check out Jim’s time-sensitive message right here. And we do mean time-sensitive: Events are moving so quickly this message could become out of date literally any time the markets are open.

So yes, the robots have made this yet another “risk-off” day.

Thus the S&P has broken back below the “psychologically significant” round number of 3,000. But it’s still better off than it was a week ago at this time. As we reminded you then, the next “line in the sand” is 2,800 — based on the market’s long-term trend going back for a decade now.

Wall Street is taking no cheer from the February job numbers — writing them off as “B.C.,” or before coronavirus.

The wonks at the Bureau of Labor Statistics conjured 273,000 new jobs for the month — way more than expected. Better yet, they revised January’s already-strong figure even higher. If the job market’s going to take a spill this spring, it will do so from a (more or less) resilient position.

The official unemployment rate ticked down to 3.5% — equaling the low for the current economic expansion. More importantly, the move down buys this expansion at least a little more time. As a reminder, in data going back 70 years, a recession typically sets in four months after the jobless rate hits bottom.

The real-world unemployment rate from Shadow Government Statistics ticked up a bit to 21.1%.

What we anticipated here yesterday came to pass today — the Russians decided not to join OPEC in a round of production cuts.

If the current level holds by the close, that’s another weekly close marking a seven-year high. We had one of those two weeks ago, which we said at the time boded well for the long term. Ditto today. Hold on tight to your bullion…

Treasuries have been likewise volatile this morning… but like gold, they’re serving their safe-haven role.

The yield on a 10-year note dipped below 0.7% for a brief time… but at last check is back to 0.73%. Lower yields translate to higher prices.

The crisis in the repo market appears to be in full swing again.

“Repo” is short for repurchase agreement — a type of overnight loan the big Wall Street firms take out with each other to fund their daily trades. The repo market seized up in mid-September; the Fed stepped in to provide these loans for the first time since the Panic of 2008.

This week the Fed’s lending reached unprecedented levels. Never before had the Fed pumped $100 billion of these loans into Wall Street in a single day. But that’s exactly what happened both Tuesday and Wednesday.

The effect on the Fed’s balance sheet is palpable. Many times since September we’ve shown a chart featuring a big spike. Then the balance sheet leveled off as the calendar flipped to 2020. Now, in the last week, it’s off to the races again — a huge bump up, past $4.2 trillion for the first time in 18 months. 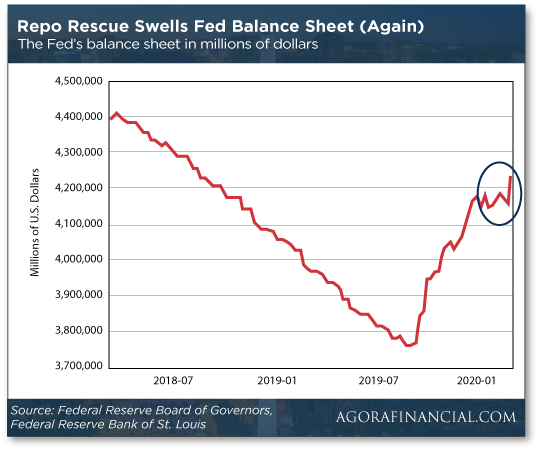 Nearly six months into this mess, we still don’t know which firms need the money or why. Last November, we joined in some informed speculation that JPMorgan Chase, the biggest bank of them all, triggered the crisis: Its relentless stock buybacks since 2013 — nearly $84 billion in total — is money it can’t use to lend into the repo market. But we concede it’s just that, informed speculation.

So wait, the coronavirus isn’t hurting sales of Corona beer after all?

Back in late January, Google Trends noted a spike in searches for the terms “corona beer virus,” “beer virus” and “beer coronavirus.” Thus has “beer virus” become a thing in the weekly missives to our Platinum Reserve members, penned by our founder Addison Wiggin.

Then last week, a public-relations firm issued a survey about the coronavirus’ impact on sales of Corona beer. 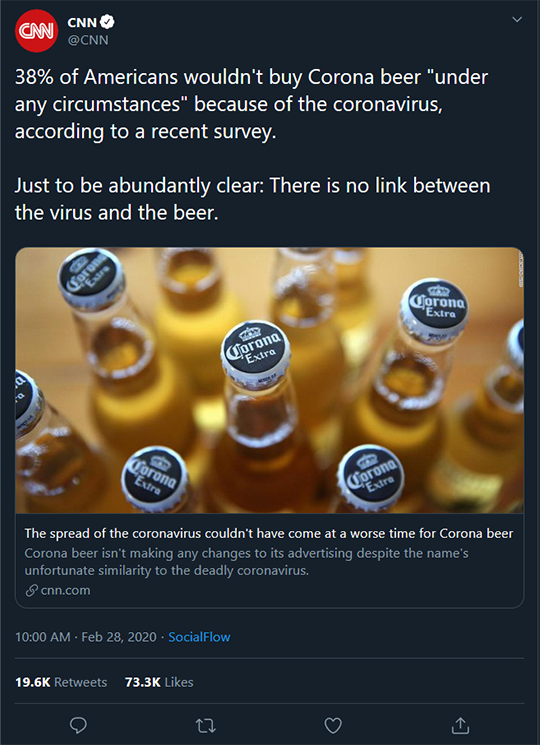 Of course, the research begs the question of how many Americans refused to drink Corona “under any circumstances” before the virus broke out. Probably substantial, no?

Anyway, Corona owner Constellation Brands put out its own statement: “Based on recent IRI retail trends, sales of Corona Extra remain strong, with dollar sales up 5% in the U.S. per the latest four-week period ended Feb. 16, nearly doubling the 52-week trend for the brand.”

Good on them, we suppose. But the statement had to acknowledge the awkwardness of it all. The first thing the press release attributes to Constellation CEO Bill Newlands is this: “Our thoughts and prayers go out to those affected by this terrible virus and we hope efforts to more fully contain it gain traction soon.”

Indeed. But you just know the ad agency handling the Corona account is wringing their hands over what happens to the Tony Romo commercials this fall…

P.S. We mentioned yesterday how one of our newest research services is delivering reliable gains since launching on the first of the year.

It’s even squeezing out gains amid the current volatility — 100% in three trading days just this week, in fact. That’s 29 winners out of 33 closed trades.

The publisher of this service has a strict membership cap to keep these trades to a limited circle — no more than 200 new members each day.

And now comes the word that no one will be accepted after midnight tonight.

No time to waste — here’s the link.