Well, this is a heck of a day to welcome aboard tens of thousands of new readers. (If you’re among them, we’re delighted to have you with us.)

As irony would have it, today is Panic Day. It’s one of 80 tongue-in-cheek “holidays” created and copyrighted by the actor Thomas Roy — who Wikipedia informs us is best known as the street preacher in the 1995 film 12 Monkeys. (Obscure, no?)

According to the “Special Days of the Month” website, today is “a day to recognize how stressful life has become and see what can be done to minimize the effects.”

[There we go. We’ve already scared off half the new people with our irreverent approach to the markets, the economy and life’s rich pageant. By the time our 5 Mins. are done today, we’ll have chased them all away for good. Heh…]

So yes, the markets are in something of panic mode today — perhaps even more than any other day the previous two weeks.

On Friday, we mentioned how OPEC and Russia couldn’t come to terms on cutting oil production. Oil ministers from the OPEC nations figured a production cut was a reasonable response to the likelihood that the coronavirus outbreak will slow the world economy and dampen demand for energy. Cutting production would put a floor under the oil price.

But the Russians figured they can ride out a stretch of low oil prices. So they didn’t play along. It’s the first time in three or four years that OPEC and Russia weren’t singing from the same choir book. So oil prices tumbled 10% in a day.

That wasn’t the end of it, though. Over the weekend, leaders of OPEC’s big dog — Saudi Arabia — decided to open the spigots wide and launch a price war against the Russkies.

As we write this morning, a barrel of West Texas Intermediate crude is down another 22% at $32.20. That’s the lowest in four years… 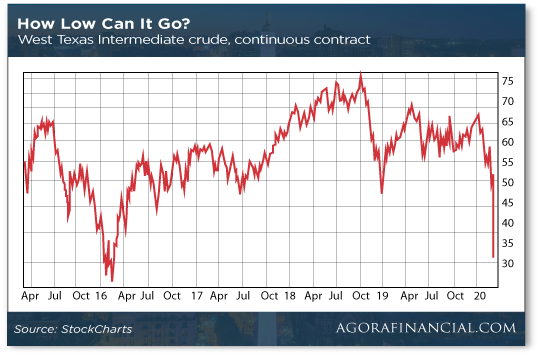 Sure enough, the panic selling spilled over into the stock market — triggering “circuit breakers” for the first time in nearly a decade.

The Dow industrials opened down 1,800 points. And the S&P 500 tumbled 7% — triggering a 15-minute shutdown of trading. The last time that happened was on May 20, 2010, amid a crisis in European government debt.

Once the market reopened, trading stabilized — kinda sorta. As we write, the Dow’s 1,800-point drop has been pared to 1,600.

Besides, the Dow isn’t the greatest benchmark to begin with. It’s the oldest of the major stock market indexes and the one the media spotlight the most, but it comprises only 30 stocks. That’s why the S&P 500 is a more reliable benchmark.

And at the moment, the S&P 500 is holding the line on a crucial level.

We revisit a chart we first shared a week ago Friday — as drawn by our Greg Guenthner, a specialist in chart analysis. This is a “raw” chart from StockCharts where Greg drew a blue line under each of the market bottoms going back to the lows of the “global financial crisis” in early 2009.

If the S&P 500 can hold the line a little below 2,800, then the bull market going back 11 years this month will remain intact. We’re right on the edge as we write.

A 20% drop is the conventional definition of a “bear market.” The S&P 500 came *this* close to bear-market territory in the late summer of 2011 and again at the end of 2018. The Federal Reserve rode in both times with a rescue package of one sort or another. We’ll be watching…

Reminder: Wall Street’s narcissism might be a contributing factor to this sell-off.

When we left you on Friday, the number of coronavirus cases in New York state numbered 22. By Sunday, it had quadrupled to over 100. Wall Street types being rather self-centered, the outbreak is now hitting too close to home.

Ditto for the other locus of power and wealth — in Washington, D.C. Two members of Congress who attended the conservative CPAC conference last week are “self-quarantining.” And because the rector at an Episcopal church in Georgetown has been diagnosed, the 500 or so worshipers who took communion there in recent days are being asked to do likewise.

Little wonder the media panic — most of the media are concentrated in New York and D.C — is quickly being cranked up to 11…

Gold is holding its own amid the turmoil — but with much volatility.

If you’re a gold bug, we can’t say it enough: When other asset markets are selling off hard and traders need to raise cash to meet their margin calls… gold is easy to unload.

But that’s a temporary condition. Count yourself lucky there hasn’t been another sell-off like the one at the end of February and keep the faith…

The only surefire safe haven right now is U.S. Treasuries.

In the bond market, rising prices translate to falling yields… and the yield on a 10-year Treasury note is careening toward 0.5%. It was less than two weeks ago that the 10-year broke below its record low of 1.34% set in 2016.

It is a breathtaking rally.

The near-panic right now is “complexity theory” in action — a specialty of our macroeconomic maven Jim Rickards, author of six books including last year’s Aftermath.

Complexity theory is familiar to physicists. But Jim is one of only a dozen or so people in the world who’ve applied it to financial markets.

“Complicated means it has a lot of moving parts,” he explained during one of our earliest conversations five years ago. “Complex means it has feedback loops, so the moving parts can decide to be something else. It’s called adaptive behavior.”

Complexity goes on steroids when different complex systems collide. The classic instance Jim likes to cite is the Fukushima disaster in Japan — which unfolded nine years ago this Wednesday.

“You could do a complexity study on earthquakes, tidal waves, nuclear reactors and stock markets. But what we have with Fukushima are four complex systems, each with an individual cascade, cascading into each other.”

And so it goes today.

Jim discussed complexity theory in the context of current events — and how it’s a much better route to successful investing than traditional models — a few days ago on the Financial Sense Insider podcast.

Usually, Financial Sense keeps these interviews behind a paywall, but this one’s available to everybody. Only about 20 minutes and worth a listen to familiarize yourself with Jim’s thinking.

Hand sanitizer? Toilet paper? Those aren’t the only consumer goods experiencing panic buying driven by the coronavirus, it seems.

This is the part of The 5 where we try to unearth something quirky from the financial world most days. Which brings us to a press release that crossed our awareness this morning: “Recent analysis shows that online ammunition retailer Ammo.com has seen a significant increase in conversions and sales since Feb. 23, 2020.”

The website’s transaction volume has grown 68% in that time — coinciding with a quadrupling of interest in the search term “coronavirus” on Google.

“This is our first experience with a virus leading to such a boost in sales,” says marketing manager Alex Horsman. “A lot of our customers like to be prepared. And for many of them, it’s not just face masks and Theraflu. It’s knowing that no matter what happens, they can keep themselves and their families safe.”

The biggest sales spike has been in .40 S&W — up an eye-watering 410%. The states generating the most sales growth are North Carolina, Georgia, Pennsylvania and Texas.

[Apropos of nothing: We really like the “Resistance Library” articles at Ammo.com. Brian Miller and Sam Jacobs are thorough researchers, especially when it comes to the origins of the Second Amendment; you won’t see any bogus Founders’ quotes of the sort that litter many websites. They ought to publish the articles in book form, they’re that good.]

“Panicdemic,” reads the subject line of a reader’s email.

“The Wuflu has now become a ‘panicdemic,’ from a false-flag bioweapons attack (China, Iran and North Korea worst hit) by a specially modified virus that only a few labs can do (UNC Charlotte?) to a virus released near China’s bioweapons lab to Japanese creating plague ships (break rules of quarantine to cause spread) and the U.S. HHS/CDC actively spreading the illness (creating contact with untrained/unequipped/unprotected staff then sent out into the public to spread it).

“It is totally overblown as a fifth local case was diagnosed with symptoms of a runny nose and a slight cough and sent home to self-isolate. It is not as dangerous as mild flu but the panic is; the disruptions will be bad, as the media can’t help but spread panic for ratings and bureaucrats suck up anything for more power (I can lock people in houses? Shut down businesses? Control more armed thugs? They are in LOVE with this!)

“It isn’t the illness so much as it is the overreaction.”

The 5: Amen on your last point. We’re not so sure about anything else you say — as an acquaintance of ours quipped this morning, coronavirus has turned half the people on the internet into Paul Joseph Watson — but in the infamous words of Obama’s first chief of staff Rahm Emanuel, governments never let a crisis go to waste.

On the subject we raised Friday about sales of Corona beer amid the coronavirus, a reader writes…

“I’d say Constellation Brands should put out a press release encouraging everyone to drink Corona Extra as it is the best inoculation available at this time against the coronavirus.”

The 5: What, not Everclear?

Congratulations to Breakthrough Technology Alert readers. This morning, Ray Blanco urged them to sell a portion of their stake in a tiny biotech developing a revolutionary treatment for ALS or Lou Gehrig’s disease. They’ve doubled their money on this position in barely two months.

This particular play is not suitable for new readers, but Ray has his eye on yet another opportunity that can also weather the market storms. Details here.