After a pause of only four years and three months… the United States has returned to a monetary state of emergency.

Shortly before Asian markets opened for the week last night, the Federal Reserve announced it was slashing its benchmark fed funds rate to near-zero levels.

Global stock markets could have reacted one of two ways. The reaction could have been, “OK, the Fed is doing everything it can, as swiftly as it can, to stay on top of this coronavirus thing. Buy.” The other could have been, “ZOMG, they couldn’t even wait till their regularly scheduled meeting on Wednesday?! SELL!!!”

Guess which way it went? (More about that shortly…)

Near-zero rates came into effect during the Panic of 2008. The monetary state of emergency lasted seven years, until December 2015. Now, in March 2020, the brief, halting attempt to “normalize” rates is aborted… 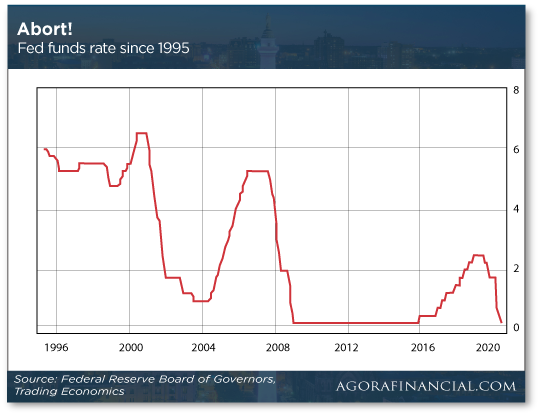 Nor is that the only emergency measure. The Fed is now being upfront about a return to “quantitative easing.”

To shore up the too-big-to-fail banks, the Fed embarked on three rounds of “QE” during and after the Panic of 2008 — printing money to buy Treasuries and mortgage-backed securities from those firms. The effect was to quadruple the size of the Fed’s balance sheet to $4.5 trillion.

If you’ve been with us any time in the last six months, you know the Fed recently resumed Treasury purchases to paper over the crisis in the “repo” market. The Fed went out of its way to say it was not QE, even though it clearly was. The effect on the balance sheet was palpable… 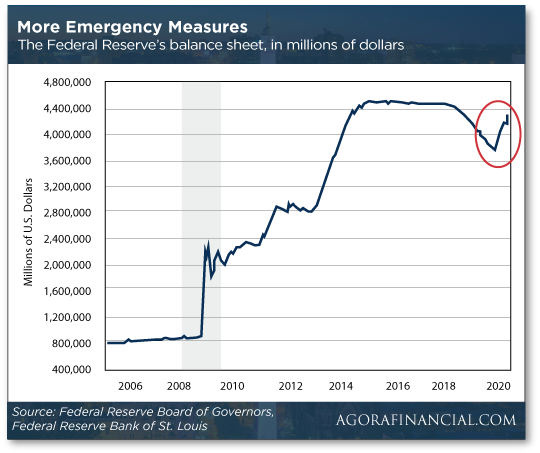 Now the Fed is dispensing with all pretense. QE is formally resuming, to the tune of $700 billion “over coming months.”

That would bring the balance sheet to nearly $5 trillion. And would that be the end of it?

For years, our Jim Rickards has been saying the Fed would take an enormous risk whenever it returned to blowing up its balance sheet. Domestically, the appearance of another bank bailout might bring out the torches and pitchforks. Globally, the willy-nilly money-printing might trigger panic dumping of the U.S. dollar. How high could the balance sheet go before triggering either reaction?

Right now, it’s still an academic question. Neither reaction is a concern. Domestically, people are more scared about their health and/or their livelihood.

And overseas, the bigger problem is a dollar shortage — which the Fed is also addressing.

From The Wall Street Journal: “The Fed said it was activating with five other central banks, including the European Central Bank and the Bank of England, swap lines to smooth out disruptions in overseas dollar-funding markets, effectively encouraging foreign central banks to use existing facilities to supply dollars to their own financial systems.”

This too is something Jim’s warned us about. In early 2016 he told us for every dollar printed by the Fed since 2008, about $20 of new debt was created. Huge amounts of that debt are denominated in dollars and issued by companies in emerging-market countries.

Result? “There are not enough dollars to go around,” Jim said. It was a slow-burning crisis that’s now coming to the fore. Anything you see in the financial media about “swap lines”? That’s what it’s all about. And there’s surely more to come.

For the third time in six trading days, the U.S. stock market opened “limit down.”

That is, the S&P 500 registered an immediate drop of 7%, triggering a 15-minute shutdown of trading. As with the last two times, it’s had the desired effect of stopping the bleeding. At last check, the S&P 500 is down just about 7% at 2,520. Most of Friday’s late-day monster rally? Wiped out.

Crude is tumbling hard, a barrel of West Texas Intermediate now below $30.

The rush for liquidity has put the hurt on gold again today. At one point this morning, the bid was all the way down to $1,450 but at last check it’s only three bucks away from $1,500. Buy the dip.

We’re getting our first glimpse into the economy’s performance so far in March — and it’s grim.

The February number came in at a respectable 12.9. The March number? Minus 21.5.

Not only is that figure far, far below the lowest guess among dozens of economists surveyed by Econoday… it’s the lowest since the waning days of the “Great Recession” 11 years ago.

As commerce and everyday life shut down across the country, New York Mayor Bill de Blasio is among government leaders saying it’s time to adopt a “wartime mentality.”

War on Coronavirus. We’re sure it’ll work out as swimmingly as the War on Terror, the War on Drugs and the War on Poverty.

“It’s a universal truth that governmental power always expands during periods of perceived crisis,” writes Cato Institute scholar Ted Galen Carpenter at The National Interest. “It also is a universal truth that politicians and bureaucrats seize opportunities to expand their missions and power. We must keep those dynamics in mind when evaluating government actions with respect to the coronavirus threat…

“It’s not too soon for sober reflection and debate about such matters. Unfortunately, the current atmosphere increasingly exhibits the characteristics of a collective panic — and that is always a poor basis for intelligent policy decisions. Americans must not passively accept government edicts and restrictions without raising pertinent questions, and, when necessary, voicing objections.”

This. Especially when restaurants, bars, theaters and gyms throughout the “tri-state area” are under orders to shut down at 8:00 p.m. EDT tonight… and it appears Mayor de Blasio was breathing hard and excreting bodily fluids in public as he had to squeeze in one last gym workout this morning. 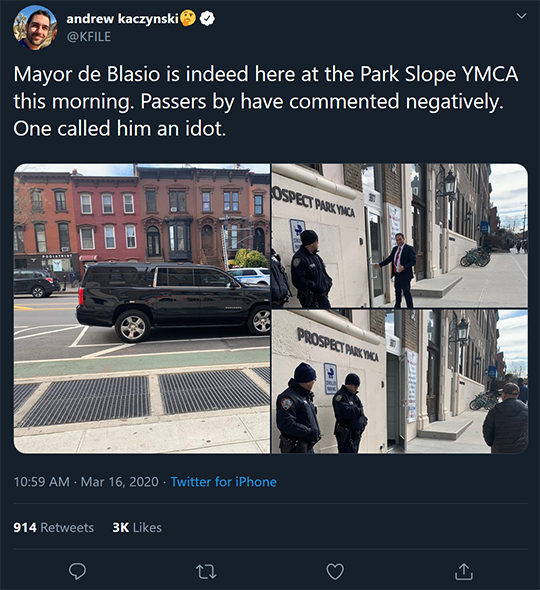 Ironically, the War on Coronavirus has prompted the suspension of an especially stupid rule that came in during the War on Terror — which brings us to one of our periodic business-travel updates.

“The Transportation Security Administration announced Friday that due to the coronavirus outbreak, it’s waiving the familiar 3.4-ounce limit for liquids and gels — for hand sanitizer only,” writes Dan Kois at Slate.

Now you can bring aboard a 12-ounce bottle of Purell or whatever.

“The TSA can declare this rule change,” Kois goes on, “because the limit was always arbitrary, just one of the countless rituals of security theater to which air passengers are subjected every day. Flights are no more dangerous today, with the hand sanitizer, than yesterday, and if the TSA allowed you to bring 12 ounces of shampoo on a flight tomorrow, flights would be no more dangerous then.”

Exactly. Your editor takes the liquid-gel ban especially badly. My wife and I seldom travel by air, but we happened to fly the very first morning in 2006 when the ban came into effect with no warning. Tens of thousands showed up at the airport, unaware they’d be forced to pitch their larger bottles of liquids-gels from their carry-ons if they wanted to board a plane.

It was galling enough that my wife had to toss two or three full-size bottles of shampoo, body lotion and so on. But we were even more outraged on behalf of the three Mary Kay saleswomen in front of us… who had to trash the entire contents of their sample cases.

To the mailbag, and a lot of pushback after Graham Summers labeled coronavirus a “manufactured crisis.”

“My normal enjoyment of The 5 was shattered by Friday’s edition,” writes a reader from Ireland.

“Your belittling of the COVID-19 virus's likely effects in the USA are reminiscent of your ever-lying president’s ridiculous downplaying of the possible outcomes. It's one thing for him to try to cover his inefficient team’s efforts, but at least we all know by now that anything he says is guaranteed to be lies. You, on the other hand, have your followers' portfolios and even lives to think about. Blatantly ignoring the facts of the outbreak will not serve your readers well.

“Despite reading in American publications that the virus is no more dangerous than the flu, it should be noted that COVID-19 transmits more easily than the 'flu. Whilst the flu is about 0.05% fatal, to date COVID-19 is about 3.4% fatal, that is times 70. In Italy it is 4% fatal. When you consider that most countries are expecting at least a 60% infection rate, I leave you to do the maths regarding the population of the USA, and the ability of your health system to cope.

“Correct information is vital to people's survival. You have a duty to not downplay the risks your readers are facing. I am not scaremongering, just asking for the truth to be disseminated so that everyone can protect themselves by taking the correct precautions.”

“How did you graduate from high school without some basic math knowledge?” adds another reader.

“It means that without drastic measures, millions will become infected (as they did with H1N1). Let's say 59 million. Two percent of 59 million (let me help with the sums, since you obviously struggle) is 1.18 million.

The 5: For starters — and we might need to emphasize this point more if you’re a newer reader — our editors do not all sing from the same hymnal. We encourage our editors to speak their minds as freely as possible, so we don’t enforce a “company line” around here… and not everyone on our team agrees with Graham’s assessment.

And yes, we understand exponential functions very well… which brings us to the U.S. health care system.

For nearly a decade we’ve fretted over the “doubling time” of federal health care spending. In 1970, it took up 6.2% of the federal budget.

On its trajectory since then, it will consume half the federal budget by 2030 or thereabouts. Except it won’t, because something in the system will break, and catastrophically so, before then. (We explored the numbers in depth most recently two years ago.)

And now the world’s most costly and wasteful health care system is confronted by a pandemic.

The biggest problem posed by coronavirus appears to be not the death rate — bad as it might be — but the complication rate. By some estimates, as many as 15–20% of victims require hospitalization.

In South Korea, this has been manageable; according to the Organization for Economic Cooperation and Development, there are 12.3 hospital beds per 1,000 people.

In Italy, it’s been nearly disastrous with only 3.2 beds per 1,000; overworked emergency doctors and nurses have to practice triage.

In the United States, the figure is even lower — 2.8. (That’s thanks in part to the horrendous “CON” laws in most states. More about that another day.)

Pity expecting mothers whose pregnancies are coming to term soon. Pity anyone unlucky enough to be in a car crash.

Most of our team has transitioned to working from home beginning this week. So rest assured we’re taking it as seriously as anyone else…