This has been one heckuva week… but even in these alarming times, The 5 tries to get you ready for the weekend with something a little offbeat… 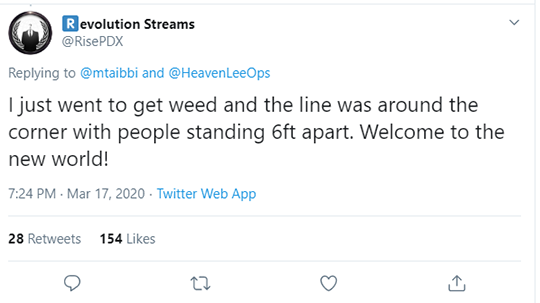 And lots of people have the same idea right about now — taking the edge off while social distancing.

Although we learn this morning that Gov. Gavin Newsom has ordered “shelter in place” for the entire state of California. That means the fifth-largest economy in the world — and a fully legal weed state — is on virtual lockdown.

That doesn’t mean Californians won’t have access to cannabis, particularly if San Francisco is any indication…

“San Francisco, the first major U.S. city to go on a full-blown lockdown… assured residents that their access to cannabis isn’t at risk,” says our pot stock authority Ray Blanco.

The city’s Department of Public Health said in a statement: “Cannabis is an essential medicine for many San Francisco residents. Dispensaries can continue to operate as essential businesses during this time, while practicing social distancing and other public health recommendations.”

Ray notes too: “One big benefit the industry already enjoys is an existing infrastructure for cannabis delivery in many states. As other similar businesses — like liquor stores — scramble to find ways to adapt to the current environment, dispensaries are a step ahead.”

Another advantage cannabusiness has over the alcohol industry?

“In a research note released this week, MKM Partners cited a study of U.S. and Canadian consumers that showed cannabis is the ‘vice of choice when alone,’” Ray reports.

"We believe any increased stay-at-home activity related to COVID-19 will accelerate the vice share shift away from alcohol toward cannabis,” MKM Partners says.

Ray continues: “The prevalence of cannabis delivery services coupled with the advent of Cannabis 2.0 in Canada increasing alternatives to smoking… paints an interesting picture for pot.”

Truth is: “Cannabis stocks have a lot more in common with companies in recession-resistant industries like health care, tobacco and alcoholic beverages than most investors realize,” Ray says.

Time and again, “research… shows that even in times of hardship, people spend money on vices.

“No, that doesn’t mean that cannabis companies will get a massive revenue boost from the current environment,” he says. “But it does mean that the fear in the market right now could be very overblown.”

Not to mention, “the whole industry could be in store for a lifeline if the Trump administration goes forward with aggressive stimulus plans for small and medium-sized businesses.”

A possible payroll tax holiday would be significant for cannabis companies that, in general, have massive costs related to operating a licensed establishment.

Nevertheless, Ray says, “the best course of action in this incredibly volatile period is still to wait it out.

“Meanwhile, our yardstick for weeding out the best pot stocks in this tough environment remains the same… “

Ray says: “Hold onto the names that are consistently outperforming the rest of the cannabis industry in this sell-off.

“Virtually everything — both in the pot world and in the broader market — is lower this week,” he concludes. But “the stocks that are ‘less worse’ now are likely to also be the ones that lead the sector out of the bear market.”

The buying spree continues: On top of the $625 billion the Fed had committed to spending on U.S. Treasuries as of this week, the Fed announced Thursday it will purchase an additional $150 billion.

According to an article at The Wall Street Journal: “The recent, rapid pace of bond buying suggests Fed officials will need to consider in the coming days how to communicate their intentions about even-larger quantities of purchases amid a full-throated effort to prevent strains in financial markets from undermining national efforts to fight the coronavirus pandemic.”

“To get a sense of the scale of recent purchases,” the article continues, “the current round is on pace to exceed in just weeks the $600 billion in the second round of bond buying, called QE2, that the Fed conducted between November 2010 and June 2011.” 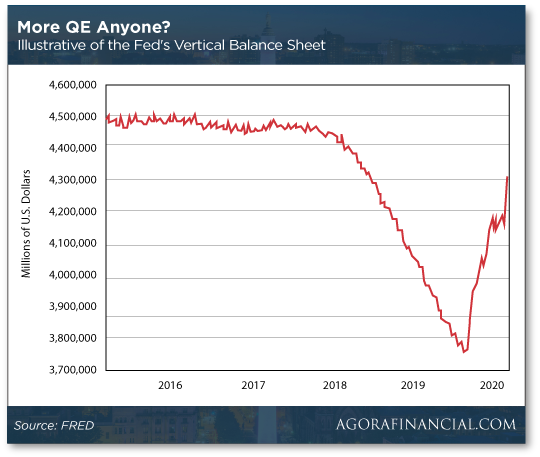 Heh… not so much today. “Thus far, the purchases have met with few, if any, objections from lawmakers on Capitol Hill,” WSJ concludes.

“While measures to contain the COVID-19 pandemic continue to escalate, the big question that investors should be asking is how much crazier things could get for your portfolio before they stabilize.” So says our quant and market historian Jonas Elmerraji.

[Speaking of containment efforts escalating, this just in from New York… 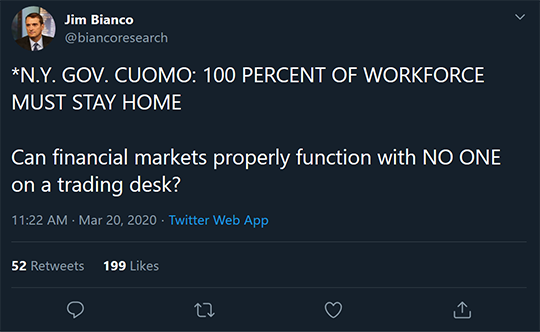 Yeah… good question, and one that’ll have to be resolved in short order.]

“Today, we’ll turn to the data” because “context matters for markets.” First, Jonas posits: Were the good old days really that good?

“But that number totally misses the fact that the S&P spent the fourth quarter of 2018 in free fall, selling off more than 19.6% between Oct. 1 and Christmas Eve.

“With that context in mind, 2019’s banner year wasn’t quite as ebullient as it seemed.

“Likewise,” Jonas continues, “the context of this market crash says a lot about what could be coming next…”

Notwithstanding, this 2020 market sell-off has been epic; just “have a look at how it compares with every other 24.6%-plus drawdown in the S&P 500 (and its predecessors) since 1928: 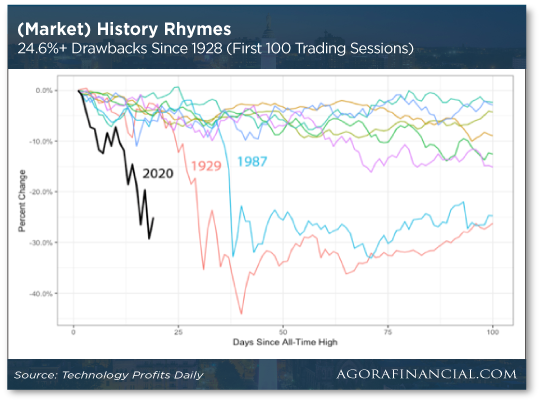 The bad news? “2020 stands out alongside 1929 and 1987 as a crash from record highs,” says Jonas. “All three years had similar price behavior, even if 2020’s drop has been the fastest market crash in history.

“The good news is that we’re closing in on the range where those other, similar sell-offs found stability, leading to several months of sideways price action,” Jonas says.

Yep, that passes for good news these days…

“Looking at the S&P 500 over the last 10 years, it’s clear that we officially went beyond ‘correction territory’ at the start of this week:

“The long-term price trend that’s been in play since the wake of the 2008 financial crisis got materially violated with Monday’s sell-off,” says Jonas, meaning “more pressure on stocks in the immediate term.

Here’s a sliver of silver lining: “Once things start tracking sideways, some of the worst-hit stocks could finally present buying opportunities after seeing their valuations pulverized in recent weeks.”

Jonas’ takeaway? “Wait for buyers to step in again and begin trending prices higher before jumping into beaten-down names,” he says. “A late entry is better than a false start in this market.”

Europeans might be 25% more bored as they self-quarantine. Well, if boredom can be measured by Netflix picture quality…

According to the BBC, for the next 30 days, the streaming giant will reduce picture resolution throughout Europe and the U.K. to relieve the strain on internet service providers.

“Lowering the picture quality would reduce Netflix data consumption by 25%,” the BBC says. “But movies will still be high-definition or ultra-high-definition 4K.”

Hang in there, European couch potatoes! (Hey… no judgment.)

“For small breweries, the shutdown of local bars is hitting especially hard,” reports Denver NBC affiliate. They have “a whole lot of beer, but no way to get it to customers.”

Luke Smith, owner and founder of Coda Brewing in Golden, for example, says: “We’ve got 40 kegs in the cooler. What’re you going to do with all that? A restaurant can’t buy it, we can’t drink it all, although we’d try."

“When Golden-based Codi Manufacturing heard about the need, they brought over one of their mobile canning systems. They’re taking it to dozens of breweries around the front range, all for free.” The breweries will simply have to pay for the cans, and Codi is even trying to offer those at a discount.

Mr. Smith says: "Codi is going to save small mom and pop breweries that receive the majority of their sales over their bar by putting their beer in cans.

"I’m going to do what I have to do to survive,” Smith says, “to put food on the table for my kids."

And beer on our tables…

In response to the situation in Brazil that Dave mentioned Thursday, a reader says: “The Brazilian approach (like the Mexican approach) to COVID-19 is to let it roll across the nation, just like a seasonal flu, while business continues unabated.

“There are a lot of models and theories about COVID-19, but the Brazilian and Mexican strategies will provide actual empirical data about the infection rate, mortality rate, etc. It should be over for them in just a few months, after which their populations will have acquired herd immunity against reinfection.

“Meanwhile, the European and U.S. strategy is to contain the spread and prevent people from ever getting infected in the first place. Even if we succeed in doing this over the next few weeks, we will have to worry about reinfection down the road.

“Some are saying that we will have to put our economy into a coma for as long as 18 months to achieve success with our strategy that will likely plunge us into a massive debt hole and/or depression.

“My goal here is not to advocate one strategy over the other — just to point out that there are two different public health strategies being adopted around the world, but it feels like the climate in the U.S. is to censor and curtail any debate on public health policy.”

The 5: No fear in offering dissenting opinions here at The 5…

P.S. The tax deadline has been extended to July 15… The more time that gives you to take advantage of Robert Kiyosaki’s Rich Dad’s 2020 Tax Guide!

But if you want your copy, you’ll have to act now. This could be your final chance to claim it.