“Coronavirus Reveals Financial Irresponsibility of Americans,” reads the headline of a tone-deaf screed at The Hill.

The author is one Kristin Tate, described as an “analyst” at Young Americans for Liberty.

She begins by reciting some of the dreary personal-finance statistics we mention here from time to time: “Only 40% of Americans can afford an unexpected $1,000 expense with their savings. In fact, nearly 80% of workers are living paycheck to paycheck.”

But, says Tate, that’s because everyday Americans are profligate. “The need for all Americans to be able to sustain themselves for at least a few months on savings is accentuated during a time of crisis. This means planning ahead when times are good. Financial planners suggest saving at least 20% of take-home income, while spending at most 30% on discretionary items. Yet too many workers still fail to think twice about spending entire paychecks for things they want but do not need.”

The following tweet was not intended as a riposte to Ms. Tate, but it serves as an excellent one nonetheless. Take it away, Cornell organic chemistry professor David Collum… 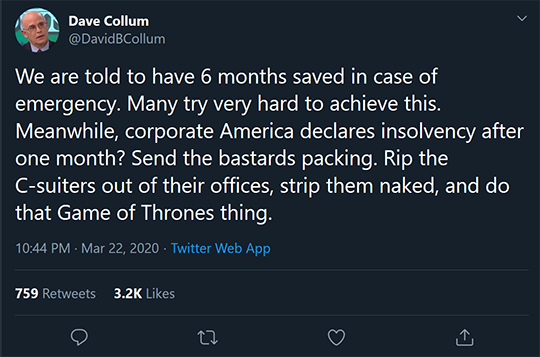 It’s staggering that Tate had nothing to say about the impending corporate bailouts — nor about why so many Americans are living hand to mouth despite a surface appearance of prosperity.

The answer comes back to a chart we first shared in late 2013, along with commentary from the inimitable Marc Faber of the Gloom Boom & Doom Report.

“If I were to look at the average family income, excluding capital gains, adjusted for inflation between 2002–2012, it is clear that 90% of these families experienced a decline in real income and another 5% experienced hardly any gains.” 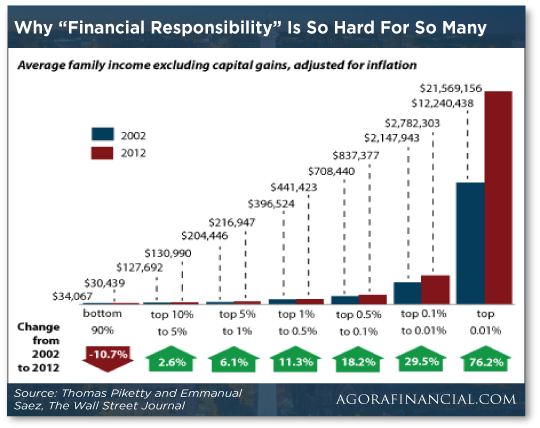 Faber laid blame where it belongs — at the feet of the Federal Reserve. “The Fed's monetary policies have failed to boost the real incomes of most people but have had an enormously favorable impact on just 0.1%, or the '1%,' as they are commonly referred to.

"In fact, I would argue that the Fed is fully responsible for the fact that 90% of U.S. families have had declining real incomes (inflation adjusted) over the last 10 years or so (as money printing raised the prices of energy, food, education, transportation, health care, insurance, etc.) and have experienced a decline in their net worth. After all, it was the Fed that repeatedly and deliberately created and continues to create bubbles, which benefit only a minority, while hurting the majority."

We’re hard-pressed to find an updated version of this chart while crashing deadline today… but we daresay none of the conditions Faber described seven-plus years ago has changed for the better. Median home prices are still well beyond the two or three times household income that personal-finance experts say is prudent. Health care and higher education are even more ruinously expensive.

Meanwhile, it’s more of the same from the Fed, even this morning — the 2008 playbook, on a cocktail of steroids, Adderall and meth.

Once again the Fed has amped up its efforts to shore up financial markets. A summary of this morning’s “emergency measures”…

Perhaps sensing these efforts have a bad look because they benefit primarily “the 1%,” the Fed threw in a sop for everyone else in the form of a “Main Street Business Lending Program.” Yeah, that’ll be interesting.

After we went to virtual press on Friday, the Fed finally got around to updating its weekly chart of the Fed balance sheet. In the two weeks ending last Wednesday the Fed has bought $426 billion in “assets”… 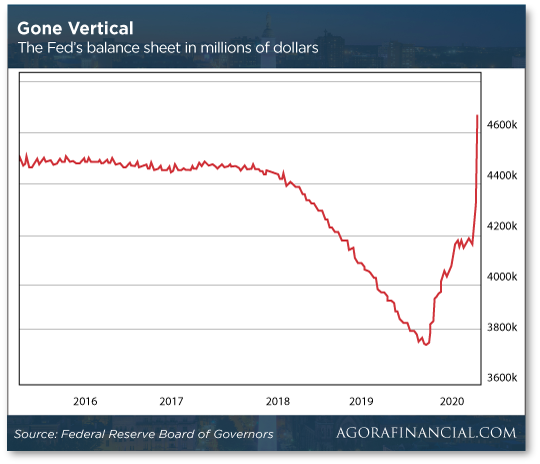 And it’s still not enough to prevent another snit on Wall Street today.

Perhaps that’s because the anticipated bailout of corporate America still hasn’t materialized. After the failure of talks among congressional leadership on Friday, Senate Majority Leader Mitch McConnell promised a vote today “15 minutes after the markets open to see if there’s a change of heart.”

Yeah, didn’t happen. They’re still haggling over Treasury Secretary Steve Mnuchin’s extensive wish list. Perhaps they’re also haggling over whether the government should take a stake in these flailing behemoths — a la the automakers in 2008–09. Asked last week whether he supports that concept, the president said, “I do, I really do.”

Anyway, at last check, the Dow has shed 900 more points, resting at 18,270. With that, the Big Board has surrendered all its gains since Election Day 2016.

Fortunately, if you’re properly diversified, the safety trade is doing its thing today — pushing Treasury prices up and yields down. The 10-year yield is down huge to 0.74%.

And gold is doing what it should be doing when the Fed announces all-out money printing efforts; the bid is up $40 to $1,539.

➢ There is only one economic number of note today — the Chicago Fed National Activity Index. The index crunches 85 indicators for a composite reading that has a sterling history of anticipating recessions whenever its three-month moving average falls below minus 0.7. The reading today is minus 0.21.

Yeah, don’t be fooled. There is one instance in 50 years when the index was caught flat-footed — because no amount of number crunching could have anticipated the 1973 “oil shock.”

And no amount of number crunching could anticipate the present corona shock.

Well, unless you’re a member of Congress. Which brings us to some unfinished business from Friday…

In case you missed it amid the blizzard of headlines… the chair of the Senate Intelligence Committee, Richard Burr (R-North Carolina), dumped a boatload of stocks worth at least $628,000 on Feb. 13 — at a time his committee was getting daily coronavirus briefings.

Also dumping stocks during the same time frame — freshman Sen. Kelly Loeffler (R-Georgia). The first sale came on Jan. 24, the day the Senate Health Committee on which she serves got a private briefing from top White House health officials.

Georgia’s governor appointed Loeffler to fill a vacant seat last year — basically as a reward for all the money she’s given to the GOP; her husband is Jeffrey Sprecher, chair of the New York Stock Exchange.

But as soon as a Democrat was implicated for similar sketchy sales hours later, it all got swept under the rug. And not just any Democrat — Burr’s predecessor as chair of the Senate Intelligence Committee, Dianne Feinstein (D-California).

But that’s how Washington works, even amid a crisis. Each party holds the other’s scandals over their heads as leverage, and everything gets covered up.

In his book The Best Democracy Money Can Buy, the investigative reporter Greg Palast describes how dueling campaign-finance scandals got squelched during the late 1990s.

The Republicans ended up impeaching Bill Clinton only for the sex stuff — and not for the money illegally funneled to the Clintons by Indonesia’s wealthy Riady family. (Remember that?) In exchange, the Democrats dropped any attempt to look into the Koch brothers, who laundered contributions to GOP candidates in key congressional districts during 1996.

The fact our “leaders” were dumping stocks last month makes the conduct of the CDC and the FDA at that same moment all the more egregious. Bureaucracy at its finest.

The Wall Street Journal had a lengthy piece last Thursday describing the CDC’s failures: “At one critical juncture, just before the CDC opened up testing to more state laboratories in February, its officials clashed with state epidemiologists on the front lines of the response to the epidemic over the scale of testing.

“Despite news and official reports heralding the rapid spread of the virus in Japan and Hong Kong, on Feb. 22 CDC officials told state officials to refer for testing only patients showing symptoms who had travel histories in mainland China.

“When a top Minnesota epidemiologist pointed out in an email to CDC officials that agency director Robert Redfield had recently tweeted that doctors treating patients who had visited Hong Kong and Japan should consider ‘#COVID19,’ the CDC’s deputy incident commander responded: ‘This tweet is being taken down.’ And, in fact, it was.”

Meanwhile, for weeks, the FDA put preposterous limits on the use of inexpensive testing designed by a company in Utah.

Writes Robby Soave at Reason: “Co-Diagnostics' COVID-19 test, which costs just $10 per patient and produces results in only 90 minutes, is already in use in Italy, Germany, the United Kingdom, Turkey, Greece, the Philippines, Thailand, Australia, Paraguay, Ecuador, Israel, South Africa and Canada. But in the U.S. it had only been available for certain entities and research institutions, per guidance from the Food and Drug Administration (FDA).

“It was not until Tuesday night that the FDA gave Co-Diagnostics emergency approval to distribute the test more generally to U.S. hospitals.”

Don’t expect any accountability — among the bureaucrats, Congress, the Republicans in the White House or the leadership of the Democratic National Committee. (Can the DNC be sued for criminal negligence by insisting the primaries go ahead last week in Florida, Illinois and Arizona?)

Wait a minute — the hoarders are now trying to disgorge their stash? 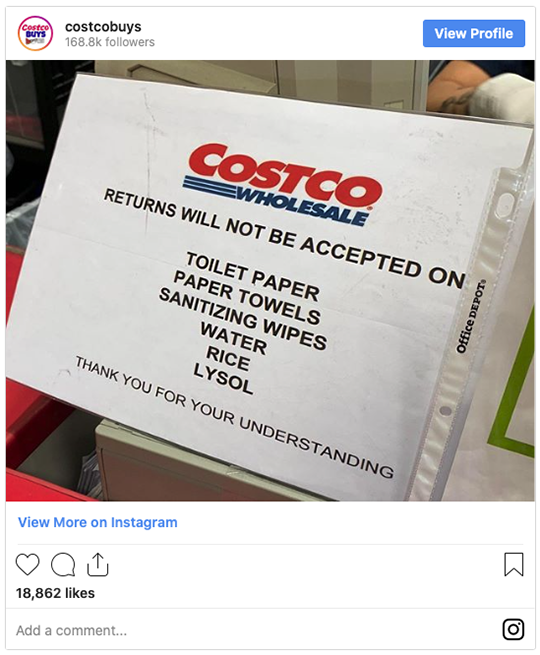 So this meme apparently is already out of date? 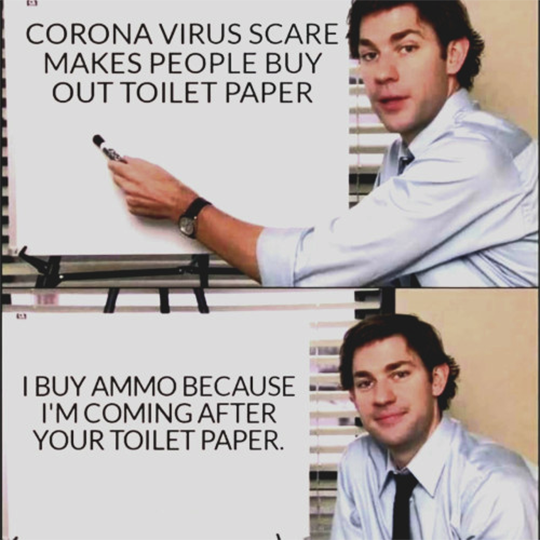 So is the run on ammo still on? Of course, either way, that’s not something people are likely to return…

P.S. The “shelter in place” orders come into effect at midnight tonight in your editor’s home base of Michigan.

Going into the new week, one in five Americans were under such orders. At the rate things are going, it won’t be long before that’s one in four.

Are you a small-business owner? Or do you otherwise have valuable “intel” about how the real-world economy is performing (or not) where you are?

The 5 has the most informed, engaged and self-reliant readership of any financial e-letter out there. Tell us what’s going on in your neck of the woods and we’ll share the most intriguing/outrageous tales in The 5. As always, we’ll never share your name — so speak up.