The naivety is touching. Yesterday, after Senate Majority Leader Mitch McConnell and Minority Leader Chuck Schumer announced an agreement on a “stimulus” bill, they got responses like these on Twitter…

Then, shortly before midnight, the Senate passed the $2 trillion “Coronavirus Aid, Relief and Economic Security Act.”

Passage came “just a few hours after the full text was released to media and not posted publicly,” says the Just the News website. The bill “was not available for review ahead of the vote on any official U.S. Senate websites — including the Senate majority leader’s site or committee webpages.”

Did the lawmakers themselves have a chance to give it a good look?

“The final 883-page bill was reportedly sent to senators’ offices at about 10 p.m. Less than two hours later, the Senate approved the legislation.”

But this is how it always goes during a crisis — no time for deliberation, consideration, a deep breath. It’s act, act, ACT! NOW!!

That’s how it went with the PATRIOT Act in 2001 and the TARP bailouts in 2008. In every case, portions of the legislation are drawn up years earlier by elements within the deep state and put on a shelf, awaiting the right moment to be sprung on us. Other elements are made up on the fly, depending on the particulars of the crisis.

Only the congressional leaders and the chairs of the relevant committees get any say on the broad strokes. Meanwhile, the devilish details are drawn up by aides to those top lawmakers; these aides are either lifers or they’ve mastered the art of Washington’s revolving door, transitioning seamlessly between Capitol Hill and K Street every few years.

Given that the present moment feels like a sick mashup of 9/11 and 2008… how could it be any different with this bill?

The TrumpBux will not be delivered via “digital dollars” — as mooted in earlier versions of the bill.

One version proposed “a digital wallet or account, maintained by a Federal Reserve Bank on behalf of any person, that represents holdings in an electronic device or service that is used to store digital dollars that may be tied to a digital or physical identity.”

The crypto community stood up and took notice… but no, nothing doing. The “rebates” will be delivered via direct deposit if you already have that set up with the IRS; otherwise, the Treasury will get around to sending a check, eventually.

Yes, there are income limits and phaseouts on who can collect their $1,200. The good folks at The Tax Foundation worked through the night to put together this nifty chart… 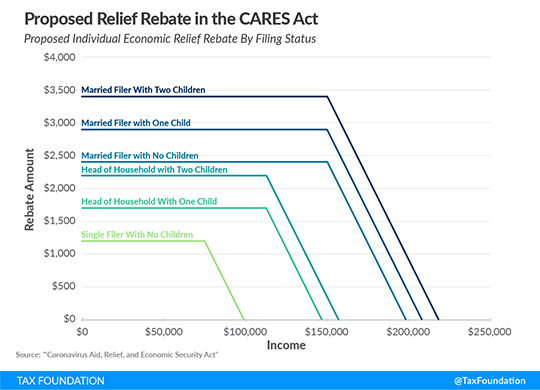 In terms of who gets the corporate bailout money, the Senate basically punted and told Treasury Secretary Steve Mnuchin, “Here, you decide what to do with this $500 billion.”

We’re sure he’ll be a wise steward of these funds.

Supposedly there will be an “inspector general” and “oversight board” to keep an eye on things. There was a similar arrangement with the 2008 bank bailouts. Fat lot of good that did.

“This is a robbery in progress,” writes David Dayen at The American Prospect. “And it’s not a bailout for the coronavirus. It’s a bailout for 12 years of corporate irresponsibility that made these companies so fragile that a few weeks of disruption would destroy them.”

Yep. We had no problem with the corporate tax cuts passed at the end of 2017. But we have a huge problem with the savings from those tax cuts being funneled into share buybacks instead of being set aside for the proverbial rainy day, and now these companies are crying poor.

Lord knows there’s no shortage of people who will gladly accept the bill’s expanded unemployment benefits.

It being Thursday morning, the Labor Department released its weekly totals of first-time unemployment claims. The number for the week ending last Saturday demolished all previous records going back more than 50 years… 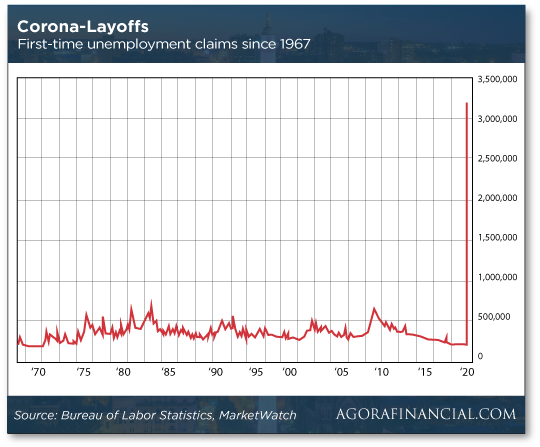 No one among dozens of economists surveyed by Econoday thought it would be this bad. No state was spared. The services sector took it hard, and within that sector hotels and restaurants took it hardest.

And yet in a classic instance of “Buy the rumor, sell the news,” Wall Street is rallying.

But a monster rally this week shouldn’t come as a surprise going by the examples of 1987 and 1929.

As our resident market historian Jonas Elmerraji pointed out last week… 2020 is only the third time the market has crashed 20% or more immediately following record highs. Here’s an updated version of his chart… 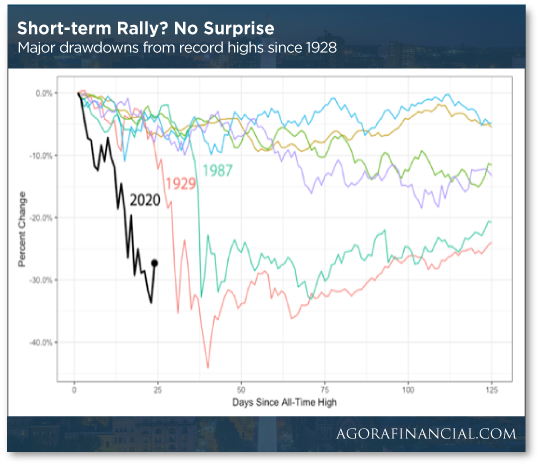 “From here, a retest of the lows put in last week looks likely,” says Jonas. “That’s what happened in each of our prior analogs.

“The good news is that barring any colossal surprises from the news cycle, we should see volatility cool off over the next 100 trading sessions or so as investors snap out of panic mode and weigh the likely outcomes from the pandemic.”

Funny thing is Jonas shared that outlook yesterday in our sister e-letter Technology Profits Confidential. Along the way he mentioned the 1987 public-television documentary Trader, featuring a young Paul Tudor Jones, before he became a hedge fund legend, anticipating the crash of October that year — in part because he was observing parallels to 1929.

Turns out Jones was on CNBC this morning. His outlook tracks exactly with what Jonas was saying yesterday — a retest of the recent lows, then a period of (relative) calm.

“I think [April] could bring us to a retest. It might even bring us to a fractional new low. But I do think the stock market’s going to find a bottom once we get a peak in the epidemic curve… My guess [about the markets] is we’ll be higher three or four months from now, five months from now, than lower than where we are right now.”

If Singapore is sinking into recession, what hope is there for America?

Singapore was one of the first countries outside China to report coronavirus cases… and now it’s the first to report post-pandemic GDP figures.

It’s ugly — 10.6% shrinkage quarter over quarter. “The trade-reliant city state now looks to be heading for its first full-year recession in about two decades,” reports the BBC.

On the New Cold War watch, we see a bipartisan resolution in the House that would condemn China for the pandemic.

From NBC News: “The legislation, spearheaded by Reps. Jim Banks (R-Indiana) and Seth Moulton (D-Massachusetts), accuses the Chinese government of having made multiple ‘serious mistakes,’ including the deliberate perpetuation of misinformation to downplay virus risks and the censorship of doctors and journalists in the nascent stages of the outbreak…

“The measure demands that the Chinese government ‘publicly state that there’s no evidence that COVID–19 originated anywhere else but China.’”

What is the earthly point of this resolution, other than virtue-signaling among the jingo set?

Not that we’re surprised. It lines up perfectly with everything we said a week ago today.

For the record: U.S. Treasury bills are sinking into negative interest rate territory.

Checking our screens this morning, the yield on a 3-month T-bill is now -0.04%. And a 1-month bill is -0.07%. You are paying Uncle Sam for the privilege of parking your cash in a safe haven. Such is the “flight to safety” right now.

It’s not the first time; there was a brief period in the summer of 2016 after the Brexit referendum threw global markets into a tizzy. But we have a feeling this time won’t be quite so brief…

“First World Problem, Resolved: Hilton to Extend 2020 Status Till 2021,” says a headline at the venerable Volokh Conspiracy blog, hosted these days at Reason.

Hilton, at least, has weighed in: 2020 member status is now extended through March 31, 2022. “This means you will continue to enjoy all the Diamond, Gold or Silver benefits you have access to today for the next 24 months,” says a statement from the chain. In addition, expiration is paused on all points scheduled to expire between now and yearend.

Alas, the airlines will never be as generous. Refunds? Uh-uh. “They simply give you credits for future trips,” Blackman writes. “At present, I have given United a ~$5,000 interest-free line of credit. You’re welcome.”

To the mailbag: “I had not really thought this before, but suddenly I realize that we, the American people, have become the subjects of a king.

“And who is the king? The federal government. It runs our lives, and decides who gets and who doesn’t. Its power just increases crisis by crisis.

“I am too poor and old to move, but heck, where would you go? And yep, I subscribe to International Living.”

The 5: It was in the spring of 2017 we took note of a series of memes beginning with “If it pleases the crown…”

It was both amusing and outrageous at the same time. Three years later, with nearly half of the country under stay-home orders, the amusement has worn off and the outrage has amplified. More tomorrow…

Confidential to the ex-Californian who fled to Idaho and wrote in earlier this week: Are you feeling any different now that the Gem State is under lockdown, too? Especially since you mentioned seeing the governor at a restaurant last week? Let us know at the email link below. We’re feelin’ your pain…

P.S. Congratulations to readers of The Profit Wire — the service where I team up with trading whiz Alan Knuckman to get ahead of the financial media in pursuit of big paydays.

Our next recommendation is only days away, using a one-of-a-kind indicator. Click here and I’ll show you how it works.