“It’s an honest-to-God doomsday scenario and the ultimate doomsday-prepper market is a mess,” says a breathless article at the usually staid Wall Street Journal.

“As the coronavirus pandemic takes hold, investors and bankers are encountering severe shortages of gold bars and coins” — that goes for small precious metals dealers all the way up to big banks.

“Credit Suisse Group AG, which has minted its own bars since 1856, told clients this week not to bother asking,” the article says. “In London, bankers are chartering private jets and trying to finagle military cargo planes to get their bullion to New York exchanges.”

The WSJ says: “Only on a handful of occasions since 2000 have gold prices risen more in a single week, including immediately after Lehman Bros. filed for bankruptcy in September 2008.”

Really puts the mind at ease…

The gold shortage story is catching on at the WSJ’s sister outlet MarketWatch — where we read this headline: “‘There Is No Gold.’ Bullion Dealers Sell out in Panic Buying.” 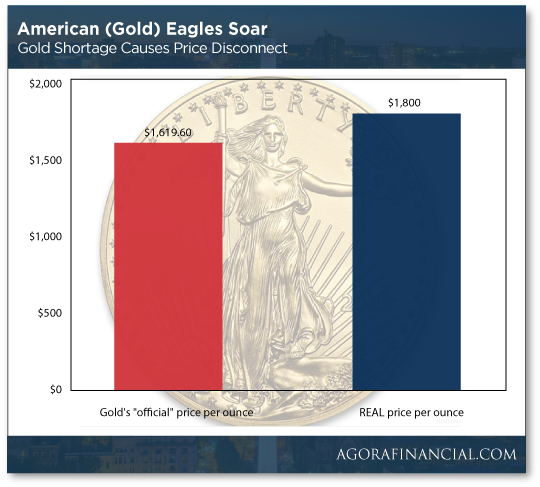 Chicago-based money manager Josh Strauss says: “There’s roughly a 10% premium to purchase physical gold for delivery. Usually it’s like 2%. I can buy a 1-ounce American Eagle for $1,800,” he says. “$1,800!” (More on the price of an American Eagle coin later.)

And here you thought toilet paper was scarce…

“Absent an assured supply of refined metal,” Byron says, “the question is whether there will be enough gold in New York to deliver against futures contracts traded on the Commodities Exchange, better known as the COMEX.

“Futures trading is a complicated business,” he explains. “Technically, traders buy and sell contracts that represent physical commodities. But much of it is just what’s called ‘paper gold.’

“Most gold contracts never really settle,” Byron says, “with [no] real metal changing hands.” It’s a trade in name only.

Byron continues: “Sometimes the contracts do settle, however, and for that you need real gold… [but] only 100-ounce and ‘kilobars’ are deliverable on the COMEX contract, and almost all of those kinds of bars come from the now shut-in Swiss refineries.”

“Street-level coin dealers across the U.S. are charging significant markups on single or small-lot coins, both gold and silver,” Byron says. “At current precious metal prices, I’ve heard of $13 silver U.S. Eagles — which usually would sell for about $14 — going for $10 markups or more [to] $23 or $24.

Byron concludes: “You see the problem, right? It’s a recipe for large upswings in gold prices, and certainly for physical metal.”

[Ed. note: Unlike the rest of the industry, Hard Assets Alliance isn’t scrambling to find precious metals. We reached out to them just yesterday to learn HAA is still delivering and taking storage orders for almost every single precious metals product…

Including gold American Eagles… for much less than the U.S. Mint’s going rate of $2,175 per coin!

And because of competitive rates that most dealers can’t touch, HAA is a model of liquidity, providing guaranteed settlement with all accounts prefunded. Plus, it only takes minutes to set up an account to buy and store gold, silver, platinum and palladium in a secure, private vault.

Take some time today to explore Hard Assets Alliance’s easy-to-navigate website or, if you prefer, you can call their toll-free phone number.

It’s worth mentioning that Agora Financial purchased a stake in Hard Assets Alliance, so we get a cut of the fees. But we wouldn’t have bothered investing if we weren’t convinced HAA serves everyday investors looking for exposure to precious metals. Again, here’s the link.]

No surprise: Consumer confidence dropped sharply in March, according to the Conference Board’s Consumer Confidence Index. The index published this morning came in at 120, down from 132.6 in February and 130.4 in January.

The Conference Board’s Senior Director Lynn Franco says: “March’s decline in confidence is more in line with a severe contraction — rather than a temporary shock — and further declines are sure to follow.”

Which corresponds with something our analyst Greg Guenthner said this morning: “No matter what anyone says, we’re still in a bear market — and we need to act accordingly!

“We’ve enjoyed a strong relief rally,” Greg says, “but there could be much more turbulence ahead.” Word.

We close the month of March remembering the aphorism “In like a lion, out like a lamb” — except in the case of cannabis stocks, the truism worked in reverse.

Our pot stock expert Ray Blanco says the cannabis industry roared back to life last week, surging as much as 32% with even mainstream outlets reporting outsized marijuana sales during the COVID-19 emergency.

CNBC says: “Average store revenue is up 52–130% compared with January at more than 1,300 stores using cannabis e-commerce platform Jane Technologies.” And according to a poll from market research firm YouGov, 53% of Americans believe — despite coronavirus shutdowns — medical marijuana dispensaries should be considered essential businesses.

Ray further notes sales of legal cannabis outstripped alcohol sales in some parts of Canada last week. And one pot company — headquartered in Toronto — has decided to come out swinging….

Shares of penny pot stock company PharmaCielo plummeted as a result of Hindenburg’s bogus research; this type of “short attack” is not uncommon, according to Ray. “It’s easy to throw mud at companies, especially when making claims that involve technical accounting scams that most investors simply don’t understand.

But the company’s pushing back: “PharmaCielo published a response to the misleading short seller report,” Ray says. “Their rebuttal addressed the issues brought up by Hindenburg, point by point.”

PharmaCielo has since retained outside legal representation and hired an independent public accounting firm to audit the company’s books.

Now PharmaCielo is considering legal options. “That’s not a bad idea,” says Ray, “especially if it serves as a warning to other shorts who think that beaten-down cannabis companies are easy pickings.”

An article at The New York Times reports: “The Department of Homeland Security has extended the deadline for Real ID enforcement by 12 months because of the COVID-19 pandemic, postponing an already delayed government requirement for enhanced identification to board domestic flights.”

Three years have passed since The 5 first reported on the Real ID Act of 2005 that requires a compliant ID to board an aircraft… at least, someday.

So we reprise a TSA warning that was posted at airports… 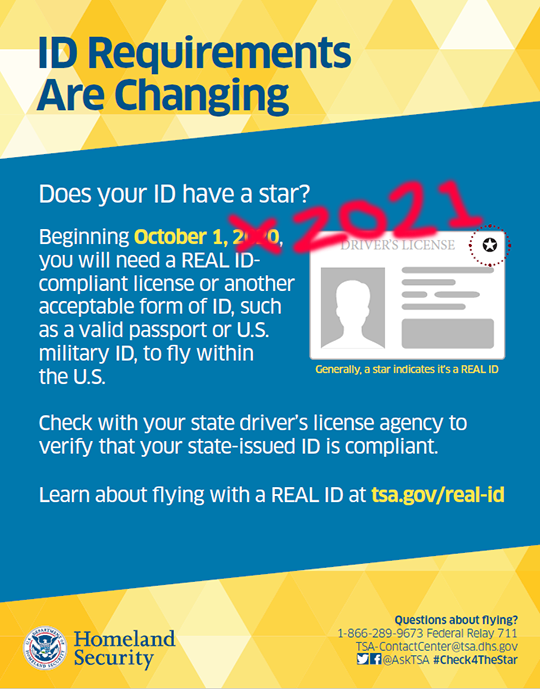 We took the liberty of updating the poster. You’re welcome, Homeland Security.

The department’s acting Secretary Chad Wolf said Thursday: “The federal, state and local response to the spread of the coronavirus here in the United States necessitates a delay in this deadline.”

Mr. Wolf continued: “Our state and local partners are working tirelessly with the administration to flatten the curve and, therefore, we want to remove any impediments to response and recovery efforts.” Gotta love gubment speak…

By “working tirelessly,” we guess he means MVA clerks are entrenched on their sofas and bingeing Netflix like the rest of us. Er, most of us…

According to BroadbandNow’s analysis, “88 out of the top 200 most populous U.S. cities… have now experienced some form of network degradation over the past week,” TechCrunch cites.

This as states sheltering in place or on all-out lockdowns mean “more people are going online to work from home, video chat and stream movies and TV to keep themselves entertained.”

TechCrunch notes: “In a small handful of cities over the past week, there have even been significant degradations with download speeds dropping more than 40% compared with the 10 weeks prior.”

And this is unexpected: With the exception of NYC, metropolitan areas with the most cases of coronavirus aren’t experiencing widespread internet disruptions. “Cities including LA, Chicago, Brooklyn and San Francisco have seen little or no disruption in download speeds.”

(There might be a dire reason for that. We wonder if people suffering the effects of the coronavirus are simply too sick to work from home or cue up their favorite Netflix guilty pleasure. Just a thought.)

TechCrunch concludes: “Internet service providers have been responding to the health crisis by suspending data caps, increasing base-level speeds and extending free access to low-income families during this time. But their ability to keep up with this level of high demand is being tested.”

[Side note: We reported last week that Netflix downgraded streaming quality in Europe by 25%. Now Amazon Prime Video’s doing the same — again, in Europe only. YouTube, however, announced last week it’s defaulting to standard definition (SD) rather than HD to keep up with demand. Aww, nuts… meaning your favorite cat/dog/llama videos will have fewer pixels of cuteness per square inch.]

P.S. Hard Assets Alliance has a vast network of wholesalers, and that’s why costs for account holders are among the lowest in the industry.

Here’s one example: A gold American Eagle coin — available right now for delivery — is sold out nearly everywhere except the U.S. Mint… where it’ll set you back $2,175 per coin!

There’s no easier way to buy and hold real physical metal. With a single click, you can buy and store gold… silver… platinum… and palladium in your choice of six audited vaults worldwide. Follow this link to set up an account.

At the risk of repeating ourselves, Agora Financial purchased a stake in the Hard Assets Alliance, so yes, we’ll get a cut of the fees (again, among the industry’s lowest). But we wouldn’t have made the investment if we weren’t thoroughly impressed by what Hard Assets Alliance does for everyday folks who want exposure to precious metals. One more time, here’s the link.