“Horse, meet water!” says a longtime reader of The 5. “One of my joys in life — and I am completely sincere — is when I find out I am wrong about an idea or belief I hold.

“So it was with interest that I read your contributor’s alternate view yesterday about why precious metals dealers might be holding back on selling their gold. (Thanks, 5, for sharing. Shows a lot of integrity due to your relationship with Hard Assets Alliance!)

“As for ‘any retailer worth his salt’ holding out for higher prices, a few observations: First, dealers are well and truly sold out. And it’s not just gold; it’s silver too, of any kind. And it’s not just one dealer. It’s every single dealer I’ve contacted.

“It’s not just dealers, but government mints in multiple countries. They aren’t saying: ‘I’ve got some, but it will be even higher than my competition’s spread.’ Instead, they’re saying: ‘Nope, nothing, nada for many weeks, but give me your money now and we’ll lock in the price for some future delivery’ (this in itself tells me this isn’t a ploy to get higher prices).

“To the second point that gold’s ‘gains are illusory’ because prices rise along with gold… the gentleman is, of course, correct. But that’s the point. You can maintain your ‘illusory’ gains in gold or suffer the very real loss in purchasing power by holding cash.

“Ask someone in Zimbabwe who needed a trillion-dollar note to buy a book of matches if they would rather have the ‘illusory’ gains of holding gold.

“There are mountains of monumental shifts going on in the world economy, trillions and trillions of them, and many trillions more on the way. The devaluation of the dollar is not illusory. It is already well underway!”

Which reminds us of a GIF that went viral last month. Can’t imagine why, right?

“So after considering your reader’s email, I stand firm in my current belief that we are in the early innings of an epic bull market for real assets — especially gold.

“What’s scary is most portfolios hold less than a few tenths of a percent of gold on average. That’s not the way a top looks!”

“This 35-year-old ‘patient zero’ has precipitated a total collapse of the U.S. economy, including the loss of thousands and thousands in your portfolio… the loss of jobs for people you know… and, God forbid, could be the loss of life for one of your loved ones.

“By now the coronavirus is having a major impact on your daily life… your work… your family… schools… your ability to travel and enjoy life as you have come to know it.

“Since all of this is true,” he says, “I’d like to offer you an opportunity to vaccinate your investment portfolio.

“But first, let me back up and explain how we got here,” says Addison.

“Scientists and doctors who track contagious diseases try to identify ‘patient zero’ of any outbreak. Despite their best efforts to stop him, ‘patient zero’ arrived in Seattle on a plane from China on Jan. 15, 2020, as I mentioned.”

The outcome? “Dr. Brian Monahan, the attending physician of Congress and the Supreme Court, has estimated that unless extreme measures are taken, 70–150 million people in the U.S. could contract the coronavirus,” Addison notes. “The virus death rate is currently 10 times the type A flu strain — and flu kills 12,000–61,000 Americans every year.

“You do the math. Hundreds of thousands could die. The last pandemic of any comparable scope, the Spanish Flu in 1918, killed some 675,000 Americans.

“But there is still time,” Addison says, “still some hope. And there is hope for your money, too…

“We have lived, worked and invested our way through three very serious market downturns: the tech wreck in 2000… the housing/mortgage meltdown in 2008… and the commodities bust in 2012.

“Frankly, we were already due for correction in the markets… even past due. Since reaching historic highs in February, the markets are now in a bear market. The Dow has seen historic down days, losses of 2,100 and 2,900 in two successive weeks. It’s been a bloodbath.

“And… the worst has yet to be calculated. No one knows what tomorrow may bring.

“The financial contagion alone could cost you and many of your compatriots billions in retirement funds.”

That’s why Addison urges: “Now is the time to vaccinate your own portfolio.

“This should be a BIG. RED. WEALTH WARNING. Flashing on your screen,” he says. “That’s why I’m issuing an all-out, urgent action on gold (and silver) today.

“Gold will soon catapult to new all-time highs (my colleague Jim Rickards even thinks gold’s heading to $10,000 an ounce or more).”

But “most methods of investing in gold and silver will cause as much pain as the rest of the markets,” Addison says. So “it must be done properly, in order to protect your wealth and not leave you stuck with no way to liquidate your position. That’s why only the physical metal will do."

Because supplies of real precious metals are running low, Addison says to move on this now… “BEFORE the shelves run bare.”

While most Main Street investors don’t know where to begin, here’s what to do right now… the hands-down BEST way to act on gold today…

Remember, in a time like this, you want physical gold. But you also want reliable storage (or delivery)… and the ability to buy and sell gold easily.

Lots of places charge an arm and a leg for buying/selling and storage. That’s why we’ve introduced you to Hard Assets Alliance over the last few days — where an account is easy to open. It’s easy to use. And the setup is FREE of charge.

After researching the best way to buy, sell and store gold… we found all of that — and more — in the Hard Assets Alliance platform. We liked it so much, in fact, we bought a stake in the company. So while we’re providing you with an easy way to vaccinate your portfolio today, you should assume we’re going to benefit from increased trading activity.

** You should also assume while precious metals dealers across the country are sold out, Hard Assets Alliance has a vast network of wholesalers with quantities of precious metals at the ready for investors like you. At reasonable rates. **

That said, Addison’s final word? “With as much urgency as I can muster: Open an account and put a portion of your assets in gold (and silver) today.”

Here’s a sobering economic reality: “On March 26, weekly initial unemployment benefit claims hit the highest level in U.S. history, with five times as many filed as during the worst week of the Great Recession,” says The Tax Foundation.

And then today, one week later, the number doubled. That means in only two weeks Americans have filed a stunning number of unemployment claims — almost 10 million — representing about 6% of the U.S. workforce.

“Whether this week's massive claims number was the worst of it remains to be seen,” CNN Business says. “Ahead of the coronavirus outbreak, weekly first-time claims had been hovering in the low 200,000s.” 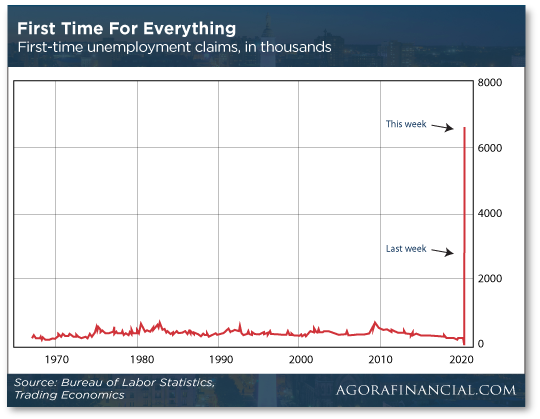 Included in the number above? Independent contractors and the self-employed — who wouldn’t normally qualify for unemployment insurance benefits — but are now eligible because of Congress’ CARES Act.

The Tax Foundation notes: “Many states are woefully unprepared for the magnitude of the challenge ahead.” Here’s how each state stacks up when it comes to ramped-up claims… 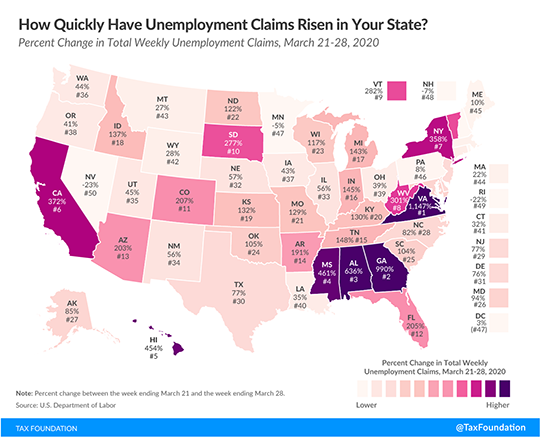 And before COVID-19 — or B.C., as we’ve come to call it — 21 states’ unemployment coffers were well below the minimum for withstanding a recession… much less an epic recession.

“Six states had less than half the minimum recommended amount,” The Tax Foundation says, “representing 37% of the U.S. population” (emphasis ours).

The six worst offenders? Well, it’s a three-way tie between Massachusetts, Ohio and Illinois, followed by neck-and-neck New York and Texas… and — dead last in terms of unemployment preparedness — California.

To the markets, where the Dow’s holding onto gains in the neighborhood of 370 points…

[More on de-dollarization] The first INSTEX transaction is confirmed…

Early last year, The 5 first reported the payment system — INSTEX — that Germany, France and the U.K. were setting up as a way to do business with Iran… while circumventing the SWIFT transaction system as well as U.S. sanctions. 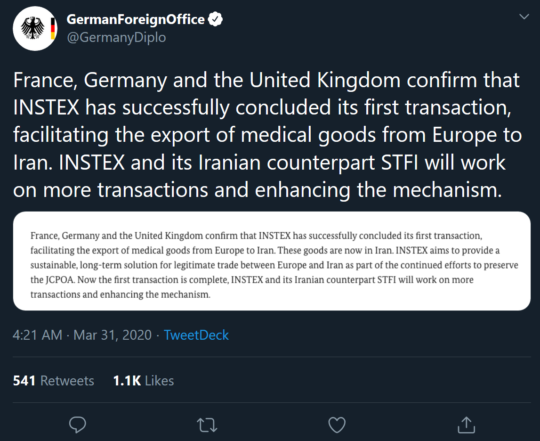 Ostensibly, the European powers claim the system is a way to preserve the 2015 nuclear accord President Trump withdrew from, but — call us cynical — it might have more to do with access to Iran’s oil… while sticking it to the U.S. dollar.

Private equity firms and venture capitalists are clamoring for a slice of the coronavirus bailout (well, at least their lobbyists are).

“Groups representing the firms are urging the Trump administration to let businesses that they own apply for $350 billion in small business loans that Congress unleashed last week,” Politico reports.

And lobbyists are kinda-sorta changing hearts and minds of Congress dwellers, including Nancy Pelosi, who thinks Silicon Valley startups might have a legitimate need for federal cash.

"Private equity has trillions of dollars of money waiting to be spent," says Marcus Stanley of the watchdog group Americans for Financial Reform. "So it takes real chutzpah for these Wall Street titans to now say they need government assistance."

Here’s what’s happening: “The target for Wall Street firms is the ‘Paycheck Protection Program,’ which lawmakers designed to ramp up the volume of government-guaranteed loans that banks can make available to businesses with fewer than 500 employees,” Politico says.

“A key feature of the loans is that they can be forgiven if a business keeps its workers.”

Now private equity firms and venture capitalists are looking for a backdoor play into this sweet, sweet free money. But not so fast?

“Small Business Administration rules calculate the aggregate number of employees for an enterprise seeking aid — meaning not just the individual small business but also other businesses in an investment firm's portfolio. That raises the risk that the smaller companies would breach the 500-employee threshold.”

We close today’s fraught episode of The 5 by saying… Chillax, man!

An article at Vice says: “While many Canadians have been frantically buying toilet paper and beans in preparation for coronavirus-related lockdown, [Matt] Eli stocked up on cannabis.”

And according to cannabis marketing firm AdCann, Mr. Eli’s not alone… 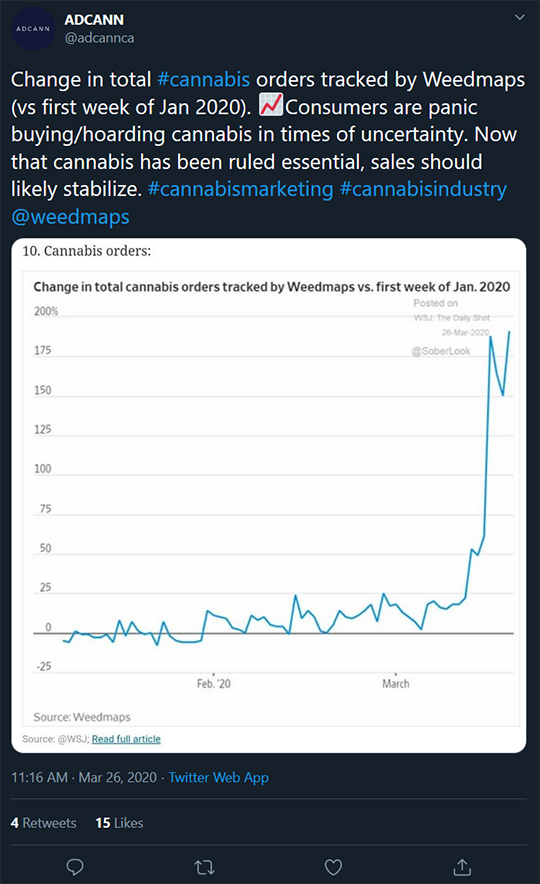 Back to Mr. Eli (we’ve got a hunch his friends call him Matty): “He didn’t just grab a couple of ounces — he purchased two pounds of weed for $2,700 from a grower friend, in addition to the half pound he had lying around the house.

Try to take it easy…

P.S. Don’t wait for the pandemic to spook the markets any longer… Click the button below and vaccinate your financial portfolio today.

Again, a quick disclaimer… We like the service that Hard Assets Alliance provides so much that we’ve purchased a stake in the company itself. So you should assume we will receive some sort of compensation if you choose to do business with them.