Our own Jim Rickards is quoted therein. He seems pleased with the result. 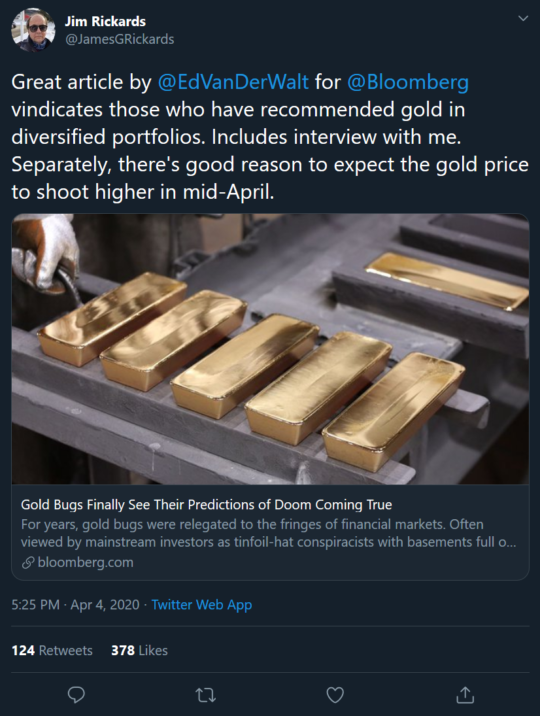 But your managing editor is offended on Jim’s behalf.

The article begins by invoking all the usual stereotypes: “For years, gold bugs were relegated to the fringes of financial markets. Often viewed by mainstream investors as tinfoil-hat conspiracists with basements full of beans and bottled water, their warnings sounded apocalyptic: a coming collapse in financial assets, widespread devaluation of paper money and global disasters that erode civil liberties.”

Of course we’re used to this. In March 2007, Time magazine included our executive publisher and 5 founder Addison Wiggin with a group of writers and thinkers it labeled “the Armageddon Gang.”

A year later, gold priced in Federal Reserve notes had jumped 48%. And six months after that, the markets were in a full-on panic. But Time’s editors were never forthcoming with an apology.

Back to the condescending tone of the Bloomberg piece…

“‘We’ve been trying to warn people that something like this would happen,’ said Jim Rickards, the author of several books that predicted a coming financial reset. Rickards, who spoke from a New England mountain compound, has long recommended holding gold as a precaution for wealth preservation.”

Note the “New England mountain compound.” Because in the lingo of Establishment Media, only kooks like the Branch Davidians live in a “compound.” (Unless their last name is Kennedy. Weird, right?)

But the Bloomberg article does acknowledge the disconnect between the “paper price” of gold and the price of real metal you can hold in your hand.

“Even the so-called paper market for gold is showing cracks and a squeeze last month on New York’s Comex, the largest gold futures exchange, added fuel to another of the prophecies: that when the crisis came, there wouldn’t be enough gold to go around.”

And while there’s “not enough gold to go around” at some dealers, we remind you the legwork done by our friends at Hard Assets Alliance is really paying off at this moment if you’re still looking to add to your precious metals stash. (Jim Rickards recommends a 10% gold allocation in a well-balanced portfolio.)

Hard Assets Alliance built a robust wholesaler network to meet retail demand at times just like this — and at very reasonable premiums compared with the competition (assuming the competition even has metal to sell you right now).

Check it out right here if you haven’t already. As a reminder, our firm bought a piece of Hard Assets Alliance last year, so you should assume we’ll collect a small cut once you fund your account. But we wouldn’t have entered that venture if we didn’t already like the way Hard Assets Alliance does good by its customers.

(Oh, and more about Jim’s outlook for a mid-April price spike later this week…)

Like the Dow, the S&P 500 and the Nasdaq are both up about 4.75%. The mainstream narrative has something to do with “signs that the virus outbreak was peaking in some of the world’s worst-hit places” (New York Times). 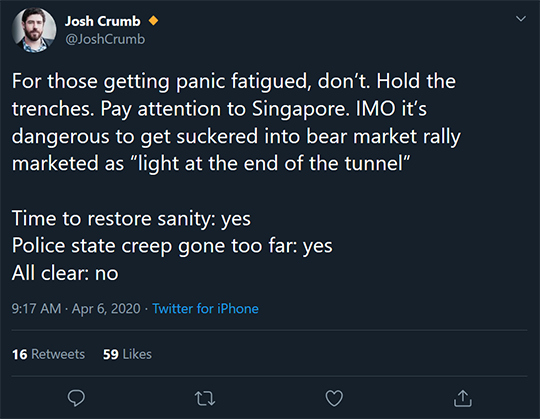 Eek — just when it looked as if Singapore had this thing licked, the city-state recorded its highest daily jump in new cases yet; new lockdown measures take effect tomorrow. Meanwhile, few cases have been reported at all from emerging-market powerhouses that are key to global supply chains — including Mexico. They’re coming.

Elsewhere, crude prices are sliding back down. After a monster run-up in two days last week — basically from $20 to $30 — the price has pulled back nearly 7% to $26.67. Seems Saudi Arabia and Russia aren’t as close to a deal on production cuts as first thought…

Meanwhile the outlook on Main Street is grim.

The U.S. Chamber of Commerce and MetLife are out with a survey of 500 small-business owners. Fully 43% of them say they won’t make it without either government help or a turnaround in economic conditions.

In addition, 46% say the economy will need a good six months to a year to return to “normal.” An interesting contrast to the consensus Wall Street outlook that’s expecting a “V-shaped recovery” once this is all over, no?

It won’t be till next week we see the National Federation of Independent Business’s monthly optimism index. That oughtta be a humdinger…

Another form of post-2008 “financial engineering” is starting to bite hard.

“Supply-chain financing,” it’s called. The Wall Street Journal posted a story about it early Saturday morning when no one would see it; it did make the front page of today’s “B” section, but that still seems like it’s buried — and so we spotlight it here.

This little bit of accounting chicanery has been around for years, but it took off after the Panic of 2008. “Using this financing,” the paper explains, “companies effectively borrow money to pay their bills, extending, say, 60-day payment terms to six months or more. It would be like taking a personal loan to pay a credit card bill…

“The arrangement… can paint a rosy picture of the businesses’ liquidity because the deals effectively boost working capital but typically don’t count as borrowing.”

The big bond-rating agencies are starting to cry foul. S&P calls it a “sleeping risk.” Says a higher-up at Fitch: “If banks stop these facilities, it’s like cutting credit lines and we might see some companies run into heightened liquidity problems as a result.”

Supply-chain financing contributed to the collapse of a big British government contractor called Carillion in 2018. Among the companies using it heavily in this country in the present — Keurig Dr. Pepper.

Mask madness update: The FDA is relenting on one of its most insane policies.

As we noted in an especially outrage-inducing episode of The 5 on Friday, part of the mask shortage in this country has to do with the FDA barring the import of Chinese-made KN95 masks. These masks aren’t as good as the standard-issue N95 masks, but they’re a heck of a lot better than, say, the bandanas many doctors and nurses are resorting to.

Around the time we went to virtual press Friday, the FDA issued new guidance that says the KN95 masks are acceptable for use in light of “continued respirator shortages.”

And yet… without formal FDA certification, there might still be liability issues for health care providers. "Our lawyer warned us we could get in trouble with these KN95s," entrepreneur Shawn Smith tells BuzzFeed. Smith wants to import the masks to sell to hospitals, but he’s gun-shy.

Certification means FDA inspectors visiting the Chinese factories. And the FDA inspectors have suspended most of their foreign visits for the rest of this month.

The virus is bringing out tyrants of the petty variety too: The village of Sleepy Hollow, New York, has banned leaf blowers for the duration of the crisis.

From the News 12 Hudson Valley website: “Village officials say since the virus is a respiratory condition, having things blown into the air could create a hazmat situation.”

A search of Google News turns up no similar edicts elsewhere — which makes us wonder what sort of “science-based” evidence the ban is based on.

Look, we get that Westchester County was sort of ground zero for the outbreak in metro New York. But come on: Don’t lawn mowers “blow things into the air” as well? Love to see the village fathers try to ban that as spring turns to summer. (Yeah, we know, don’t give ‘em any ideas…)

Before we get to the mailbag, a friendly reminder: We have a strict 5 Min. clock to adhere to. You stand a much better chance of seeing your email published if it’s on the shorter side. Otherwise, you run the risk of us truncating it, or using only the section we find most interesting — and it might not be the section you think is most important.

We understand you’re cooped up and you need an outlet. But as Shakespeare said, “Brevity is the soul of wit.” Aim to be witty!

OK, with that preface…

“Both sides are taking advantage of this crisis!

“The two parties that have a stranglehold on our political choices are simply two wings of the same bird. Both keep taking America in the same direction — more deficit spending, more fake money, more unsustainable debt, more taxes, more laws, more disparity in incomes, more divisiveness and hate, more foreign interventions, endless wars, bigger government, more incursions on our civil liberties — all the while ignoring and violating the Idea of America and our Constitution.

“The Republicrats divide their party into two teams, Democrats and Republicans, who pretend to hate one another, to have deeply opposing views. Yes, they approach from different angles, with different game plans, but they both continue the steady march in the same direction, toward authoritarianism.

“Both ‘sides’ have ‘come together’ to take advantage of this pandemic. The rush to shut down the country was unprecedented (while the pandemic is not). And the ludicrous false promise that no American will suffer financially was pretty much unanimous.

“Something very strange and very frightening unfolded in the last couple of months, a quantum shift in ‘the Land of Liberty.’ It was not this latest mutation of a virus — one that has hounded us for decades — but rather the way that we responded this time. For the past hundred years we have been on the path to authoritarian rule, the Laws of Rulers rather than the Rule of Law. It looks like we have arrived: What seems to be unfolding in slow motion in the moment is likely to look like it all happened almost overnight when we look back on it.

“Never let a crisis go to waste? They sure didn’t waste it this time! Nor even spend any time thinking about it. Even though both sides are acting in unison now, they will still squabble and fight in the aftermath, accuse and blame, pick at one another over the bones. Because they want to be the one in charge. But in charge of what?” 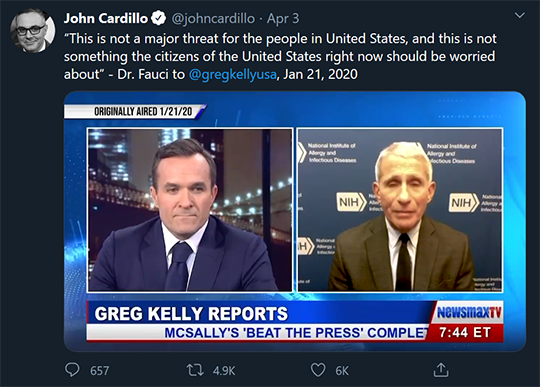 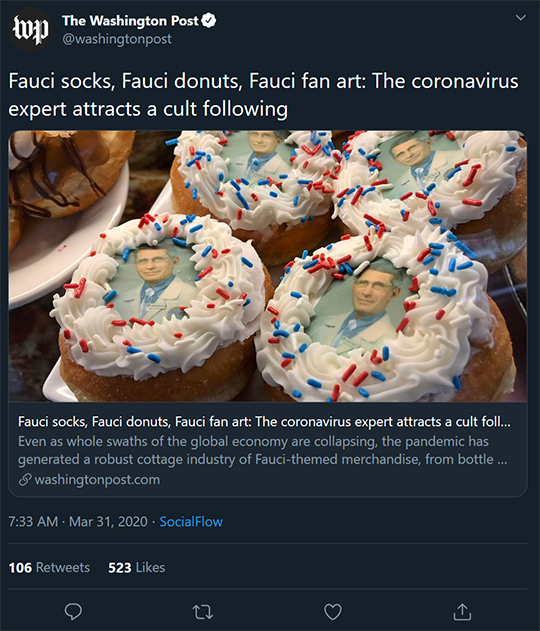 We’re too exhausted to be outraged. Which is probably the idea, no?

P.S. Amid all the market volatility, some things don’t change — like how a positive outcome of a clinical trial can send a biotech stock jumping.

This morning, Ray Blanco urged his FDA Trader readers to take profits on the developer of a cancer drug. And little wonder — shares are up 93% this morning.

Is there more where that came from? You bet. See for yourself right here.