They’re Coming for Your Savings

So The Wall Street Journal is handling PR for negative interest rates now?

If a recent article is to be believed, the media outlet’s campaigning to win over Americans to the upside-down trend that's been a thing in Europe since 2014. And now it’s washed ashore in the U.S. — in March, 3- and 6-month T-bills went negative.

“Rates going below zero mean that bond yields will shrink — and the dividends over the life of the bond plus the proceeds of the principal at maturity may not cover your purchase price.”

We just counted one… two… three strikes against negative interest rates… But is that the spin machine we hear whirring in the background?

“Even if rates go negative, bond funds would still perform their traditional role as a diversifier and stabilizer for an investment portfolio — investors would just receive a lower income stream from them,” the article says. In other words: Shut up about it… you’re going to L-O-V-E negative interest rates!

The thing is negative interest rates aren’t just coming for bonds, they’re coming for your savings too…

Our income specialist Zach Scheidt calls this phenomenon out for what it is: “The silent wealth killer that is threatening so many American savers is negative interest rates.

“Of course, we've had our challenges with low interest rates for years in America,” Zach says. “But… some of the key Treasury bonds that affect how much interest you're paid on your cash balances actually flipped and gave investors a negative yield.”

Zach doesn’t mince words: “It's a frightening sign of what's to come in the years ahead for savers,” he says.

“That's the bad news. And it truly is a crisis for those of us who have carefully set aside our savings… But as with any other crisis, there's also opportunity if you know where to look.”

Zach says: “One of the best ways… to triumph over the threat of negative interest rates is to invest in quality dividend stocks.

“When you buy shares of a dividend stock, you'll actually own a small piece of a profitable company. And as a part owner, you're entitled to your portion of the company's earnings.”

Here’s the part about a reliable income stream…

“Dividend stocks pay out a portion of those earnings to investors, and they typically send the payments out on a quarterly basis. So for every dividend stock that you invest in, you'll usually get four income checks a year.

“And depending on which dividend stocks you invest in,” Zach says, “these payments can dwarf the income you would normally receive from a savings account or money market fund.”

Zach anticipates “a wave of investment cash moving into these reliable dividend stocks,” especially as investors try to navigate through a “flash bear market.”

The massive market sell-off “has knocked stocks of all shapes and sizes lower, including the very best dividend stocks… So today, you can use your hard-earned savings to buy these reliable income-generating stocks at discount prices,” says Zach.

“It's the perfect scenario for savers who want to get away from the negative interest rates and fight this financial evil with reliable income.”

But, Zach warns, not all dividend stocks are equally worthwhile, so you’ll need to choose wisely. As you start investing for income, remember to…

And Zach’s team has landed on a pay-dirt opportunity that fits all three of his criteria… and should profit from the president signing into law the Secure 5G and Beyond Act on March 23.

To sum up, the Trump administration released a six-page document — the “National Strategy to Secure 5G” — that provides a blueprint for the 5G act’s implementation, including…

Did you see that?… 5G infrastructure?

While everyone is trying to get ahead of this tech revolution, some savvy investors are already generating income from 5G… before it blankets America.

And Zach and his team say people taking advantage of certain 5G companies will have the opportunity to dip into a pool worth billions of dollars.

To learn how you can be one of them, learn more right here.

“I think we have a situation where investors became so pessimistic so quickly that even a little bit of perceived good news has unleashed indiscriminate buying in stocks — at least for now,” says Greg. “I don’t expect these ‘good vibes’ are here to stay, but we will do our best to take advantage of them while they’re here.”

[Shhh… we don’t mean to dispel the good juju, but we just read that requests to delay mortgage payments jumped almost 2,000% over the last two weeks. Did someone say everything bubble?]

For the key economic number of the day, we turn our attention to the NFIB Small Business Optimism Index that’s actually making history today (and not for a good reason). The index cratered 8.1 points in March to 96.4… signifying the steepest monthly decline in the survey’s history.

“Small businesses are living through the coronavirus pandemic right now and it’s hard to say what the severity of the disruption will be, but we do know they’re feeling the urgency,” says NFIB Chief Economist William Dunkelberg.

Urgency? Mr. Dunkelberg goes on to say a federal cash injection is the only way Main Street businesses won’t be shuttered after Americans emerge from sheltering in place; about 50% of small-business owners said — under current conditions — they won’t survive another two months.

Perhaps most eye-opening, the NFIB gathered the majority of survey responses in the first half of March, so the sudden spike in unemployment isn’t even fully built into the data.

What a crap storm…

We can expect economic cycles to ebb and flow, which will impact state coffers; in that likelihood, states should be budgeting for rainy days, right? 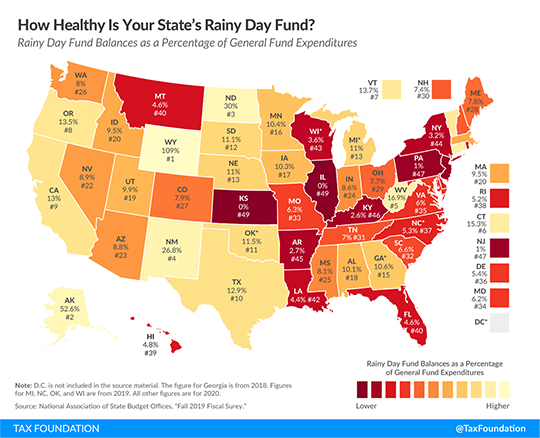 Just eyeballing the map, we’re struck by how a couple of states with the best-funded pension plans for government employees have the worst-funded rainy day account. (We’re lookin’ at you, New York and Wisconsin.)

On the other hand, we’re equally surprised to see California — infamous for its underfunded CalPERS — breaking into the top 10 for rainy day funding.

Aaand… a tip of the cowboy hat to Wyoming for its super-funded WTSHTF account.

While many states consider cannabis dispensaries “essential” during the COVID-19 crisis, one state’s breaking rank…

Our pot stock authority Ray Blanco notes: “Massachusetts’ governor, Charlie Baker, made the call to close the state’s 14 recreational dispensaries out of concern that as one of just three New England states with legal adult-use, the stores could bring in unwanted traffic from neighboring states at a time when public health officials are trying to keep folks isolated.

“That concern is precisely why legal cannabis delivery remains such an important business,” says Ray, “and will likely remain [so] for the rest of 2020.”

Two California delivery services — Eaze and Driven — report an uptick in new customers to their platforms since the start of coronavirus shutdowns.

Elizabeth Ashford of Eaze says: “On March 19, our new signups to the site increased by 122%. Our first-time deliveries were up like 73%. That's [comparing] any other Thursday versus March 19.” Ray says: “Driven is seeing similar growth – it’s also a publicly traded company (OTCBB: DRVD).

“For now,” Ray concludes, “it’s a bit too early to look at a buying opportunity here. I’d like to see coronavirus-fueled volatility in the broad market settle a bit… But [cannabis delivery companies] are on my radar.”

More on essential businesses: “The [U.K.] bicycle industry has seen a surge in business in recent weeks,” reports The Guardian, “particularly for bicycle menders as people get old bikes out of their sheds in a bid to avoid public transport during the coronavirus outbreak.”

Closer to home the rules concerning bike shops vary state by state. According to the TreeHugger blog: “It is a struggle to convince authorities that bikes actually are transportation and not recreation.”

That’s what happened in New York until Council Speaker Corey Johnson and others convinced Gov. Cuomo that “bike shops should be deemed essential services and allowed to stay open,” especially for “delivery workers” and “essential workers who choose to commute by bicycle.”

The same scenario went down in California…

TreeHugger continues: “Right now there are so many people competing for sidewalk space that some cities are converting the almost empty traffic lanes to create more space for bikes, runners and pedestrians.

“It really is time for a reallocation of road space to give more room for people who walk and a safe, separated space for people who ride bikes,” the blog post says. “It's also time to recognize how useful and important bikes can be in a crisis like this.”

Heh, a sign of the times… if there ever were one.

And a shout-out to our bike shop owner in Wisconsin: We hope he’s benefiting from the essential designation… and maybe some increased foot traffic?

Well, you know what we mean…

P.S. The biggest crisis to hit America in recent times has pushed 5G front and center… And remote work has only underscored the need for more robust 5G infrastructure in the U.S.

Now the federal government is trying to accelerate 5G’s deployment… the benefits of which will transfer directly to the people who earn what we’re calling “5G Cash.”

To see how you can collect “5G Cash” of your own click here.