She did absolutely nothing wrong and she promises she’ll never do it again.

That’s the upshot of an indignant Op-Ed in The Wall Street Journal by Sen. Kelly Loeffler (R-Georgia).

Amid the blizzard of corona headlines last month, it emerged Loeffler was one of two Republican senators who dumped stocks in January and February after getting confidential briefings on the virus’s spread.

The media buried the story as soon as the names of more politicos who did the same thing were revealed, and some of them turned out to be Democrats. When scandals become bipartisan, they vanish quickly.

But Loeffler’s case didn’t go away completely, simply because of who she is. Or who her husband is — Jeffrey Sprecher, CEO of Intercontinental Exchange, the parent firm of the New York Stock Exchange. 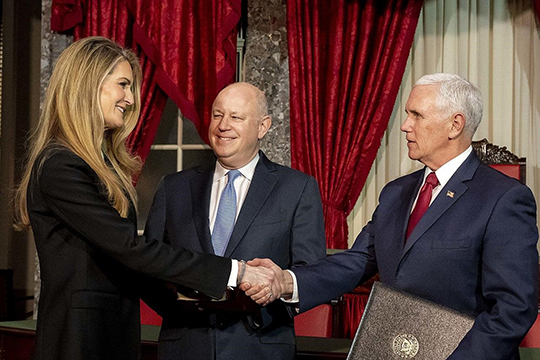 Georgia Gov. Brian Kemp appointed Loeffler to the vacant seat last December, basically as a reward for all the money she’s given to the GOP.

(That’s the same Brian Kemp who said he’d never heard until eight days ago that you can spread the virus without exhibiting any symptoms. Seems like something a governor ought to know, right? But we digress…)

Loeffler’s first stock sale came way back on Jan. 24 — the day the Senate Health Committee on which she serves got a private briefing from top White House health officials.

From that point until mid-February, the couple executed 27 sales of publicly traded stocks. Total value of those shares — at least $1.275 million and maybe as high as $3.1 million. (Congressional disclosure forms come in ranges, not precise figures.)

“I have never used any confidential information I received while performing my Senate duties as a means of making a private profit,” says Loeffler’s article. “Nor has anyone in my family.”

The adjectives “confidential” and “private” sound very definitive to you and me. But it’s likely her well-compensated lawyers know how to stretch those words further than a handful of Silly Putty. Love to have been a fly on the wall as they massaged this piece with her PR pros…

Anyway, to try to make the whole thing go away, Loeffler promises she and her husband will dump all their individual stock positions and related options. From here on, they’ll stick to mutual funds and ETFs.

But the story’s not over. Because it’s one of the couple’s trades following their initial selling frenzy — a buy — that has our attention this morning.

It turns out that that trade may have helped trigger a buy signal in one of our premium trading services. Readers have already pocketed a 50% payout.

These readers subscribe to The Profit Wire — the premium service where floor-trading veteran Alan Knuckman and I team up to get ahead of the financial media in pursuit of big paydays.

According to The Atlanta Journal-Constitution on April 1, Loeffler’s husband “bought $206,774 in chemical giant DuPont de Nemours in four transactions in late February and early March.

“DuPont has performed poorly on Wall Street lately, but the company is a major supplier of desperately needed personal protective gear as the global pandemic strains hospital and first responders.”

As it happens, The Profit Wire relies on a proprietary indicator — we call it QIT-4 — that detects insider buying in the options markets using public resources.

To be clear, this is not the sort of buying that shows up in company disclosures to the Securities and Exchange Commission. Only a powerful data tool can sniff out this kind of unusual market activity — the kind of buying that often foreshadows an imminent jump in the share price.

Late last month, QIT-4 lit up on DuPont. I did a double-take, because I knew DD was trading near nine-year lows — collapsing 72% from their peak in early 2018. Seemed as if there was nowhere to go but further down.

Still, if you dug deep enough, you could find articles in the chemical industry trade press that cited growing demand for one of DuPont’s signature products, Tyvek — the stuff you see wrapped around houses under construction. Sure enough, Tyvek is also used in the protective garments used by health care workers.

So Alan and I issued a buy recommendation on March 24 for DD call options. If readers followed Alan’s trade instructions to the letter, they banked a 50% gain on Tuesday.

Not bad for just two weeks. And because the options don’t expire till June, many readers are holding out for even bigger gains between now and then.

The stock market peaked in late February, but our Profit Wire recommendations since then are still generating gains. We’ve booked two more 50% gainers, plus a clean and quick double — 100% gains in only six days on Slack Technologies Inc.

I could go on all day about how QIT-4 puts you ahead of market-moving news — like the disclosure of this power couple’s well-timed DuPont buy — but our 5 Min. clock is ticking. Follow this link to learn more about how this predictive tool can work for you.

To the markets — which just got another sugar jolt from the Federal Reserve.

At 8:30 a.m. EDT, the Labor Department issued its weekly report on first-time unemployment claims. The good news? The number was down slightly from the week before. The bad news? Well… 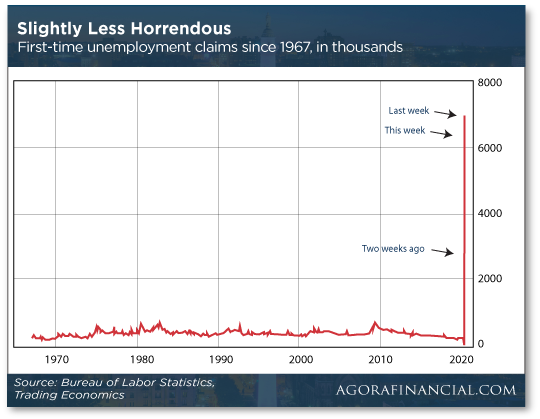 Moments later, the Fed announced $2.3 trillion in additional monetary “stimulus” — loans for small and midsize businesses, along with state and city governments.

In addition, the Fed is wading still deeper into the corporate bond market. For the last few weeks, it would buy only investment-grade bonds. Now it’ll buy junk bonds too — assuming the rating agencies downgraded those bonds to junk status after March 22. (Hello, Delta Air Lines and Ford Motor Co.) Oh, and that generosity extends to junk-bond ETFs as well.

But for the moment anyway, that “trip back” is not a concern.

Gold is reacting the way you’d hope it would as the “money printer go brrr” at an even higher speed than before. The June gold contract is up $51 to $1,735.

As for crude, there’s supposedly a deal between Saudi Arabia and Russia for production cuts. At one point this morning, a barrel of West Texas Intermediate leaped 12% to $28.36. But the devil is in the details, and Satan hasn’t shown his face yet. Thus the price has pulled back to $26.19.

Meanwhile, we have a lingering question about some of the Fed’s previously announced rescues: Namely, can companies still do stock buybacks?

There was much hoopla when Congress passed its $2.2 trillion relief bill last month. “We ensured in the bill that any taxpayer dollars given to industry go first and foremost to worker paychecks and benefits, not CEO bonuses, stock buybacks or dividends,” said House Speaker Nancy Pelosi.

Wondering if there’s a catch? “The rule only speaks to direct loans. There are countless other ways for companies to get money in this rescue,” writes Matt Taibbi — the Rolling Stone veteran now striking out on his own using a platform called Substack.

“It appears a corporation that issued bonds and sold them into the Fed’s giganto-buying programs could take the proceeds of those sales and buy its own stock,” Taibbi goes on.

“Marcus Stanley of Americans for Financial Reform points out that buybacks are actually mentioned in the terms for the Fed’s new Primary Corporate Credit Facility. The Fed program offers an arrangement where certain companies (likely, the ones in serious trouble) can issue bonds without having to pay interest for a year. ‘A borrower that makes this election may not pay dividends or make stock buybacks during the period it is not paying interest,’ the rules state.

“Presumably, that means a company that issues bonds in normal fashion and sells them into the facility may pay dividends and make buybacks. ‘That’s how I read this, that they considered that,’ says Stanley.”

It might not be the most hygienic way to transact — certainly our masters at the World Health Organization would disapprove — but Americans are loading up on bank notes.

“As coronavirus concerns grow,” says an article at Quartz, “the amount of physical cash in circulation has risen, jumping 1.8% during the week that ended March 25, increasing to $1.86 trillion in absolute terms.”

There’s been nothing like it since the Y2K scare at the end of 1999 — when some people thought computers would go haywire as soon as the calendar flipped to 2000. 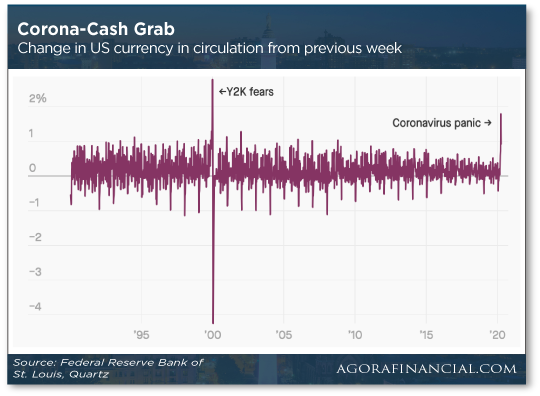 But it’s not as if people mistrust the banks. Demand account balances — that is, things like checking and savings accounts — leaped 16% in the week ended March 23. That was the biggest spike since the summer of 2011, when a “partial government shutdown” loomed for the first time in many years. Safety is in the eye of the beholder.

“You seem to imply that owning ‘physical gold’ is the way to go,” a reader writes.

“Does that also mean that playing gold in the options market is not the best idea?”

The 5: We have no problem with “paper gold” vehicles — as long as you’re using them for short-term trades. As with any short-term trade, use only money you can afford to lose.

“Are gold miner and royalty stocks the same as other gold stocks?” reads another inquiry. “Will they go up again when Zero Hour gets here?”

The 5: Usually the term “gold stocks” refers to the miners — which are a very different animal from ETFs that trade on the stock exchange and have some sort of link to the price of gold.

If you insist on going the ETF route, maybe because you want the convenience of something you can trade in a plain-vanilla brokerage account, do your research. Some of these vehicles have physical gold to back them up. Others — including the most popular — are backed mostly by mystery-meat financial instruments. (If they trade at a discount or premium to “net asset value,” that’s a good sign.)

Within the category of the mining stocks, yes, there are the royalty players. As you might know, they’re attractive because they don’t have costs to worry about — they offload all that risk onto others and collect the checks.

But no matter the business model, mining stocks can be iffy at this time because many mines are shutting down to prevent the spread of the virus. No production, no revenue. Do your research and brace for unexpected developments.

Again, we’re partial to physical — especially now, for all the reasons we’ve been discussing in recent weeks, including yesterday. It removes all doubt.

On the theory that perhaps we’ll be spared a round of eye-popping headlines for a brief spell, The 5 will follow its own tradition and not publish tomorrow. But we’re back on Saturday with our 5 Things You Need to Know weekly wrap-up, and the weekday edition of The 5 returns as usual on Monday.