We pride ourselves here at The 5 on staying ahead of the curve. But in the present crisis, it really sucks.

On Monday, Feb. 24, when the media were still obsessed with Bernie Sanders and the World Health Organization still couldn’t bring itself to call the coronavirus outbreak a “pandemic”… we introduced you to the term “social distancing” and we anticipated measures like “canceling mass events.”

Two and a half weeks later came the “9/11 moment.” On the evening of Wednesday, March 11, the president announced from the Oval Office that incoming flights from Europe would be banned, while the NBA suspended its season and Tom Hanks announced he’d tested positive. From that moment forward, the school shutdowns, and then the business shutdowns, felt inevitable.

Then on Friday, March 27, when the media were obsessed with passage of the spend-a-palooza “CARES Act”… we spotlighted Harvard research that recommended “intermittent distancing” because a single lockdown period wouldn’t work… and an essay by the editor of the MIT Technology Review musing over a timetable of two months lockdown, one month lifted until a vaccine comes to market, perhaps in 18 months.

We feared once again the notion would go mainstream 2 and a half weeks later. Which brings us to a little red headline at the very top of the Drudge Report this morning…

It links to a Bloomberg story that starts thus: “Without an effective therapy or a vaccine for the novel coronavirus, the U.S. economy could face 18 months of rolling shutdowns as the outbreak recedes and flares up again, Federal Reserve Bank of Minneapolis President Neel Kashkari said.”

Your editor came face to face with Mr. Kashkari at a “town hall” he held three years ago and came away impressed only with how glib he is compared with the typical central banker. Even then it was obvious he had ambitions beyond being a regional Fed president. 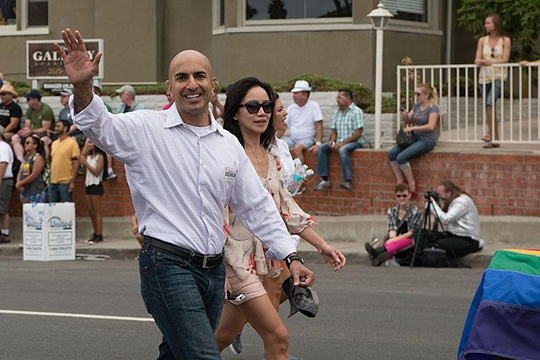 Kashkari campaigning for governor of California in 2014. He had no chance to win, but it was an excellent opportunity to hone his political skills [Wikimedia Commons photo by Tristan Loper].

This year he has a vote on the Fed’s Open Market Committee. He was the subject of a long 60 Minutes segment last month. The guy’s clearly auditioning to be future Fed chairman in the National Emergency Unity Government (“NEU-Government”) under co-executives Ivanka Trump and Chelsea Clinton.

“We’re looking around the world. As they relax the economic controls, the virus flares back up again,” Kashkari said yesterday on the Sunday morning talk-show circuit.

Note how he said “economic controls.” Not “public health measures.” Well, even the most glib public speakers can have a Freudian slip now and then and reveal themselves as control freaks and power trippers.

Anyway, continuing: “We could have these waves of flare-ups, controls, flare-ups and controls until we actually get a therapy or a vaccine. I think we should all be focusing on an 18-month strategy for our health care system and our economy.”

Of course, if you’re the owner of a restaurant or a flower shop or a salon… there’s no way to plan for the future, no possible “18-month strategy” for your business, in the face of unpredictable and unscheduled “flare-ups and controls.” Reading Kashkari’s remarks, it’s understandable if you’re tempted to pack it in right now.

And as we noted last week, people who’ve actually developed vaccines for viruses say an 18-month timeline is pure fantasy; it could be a decade or longer.

But hey, what’s a little economic misery when the stock market’s on a tear? 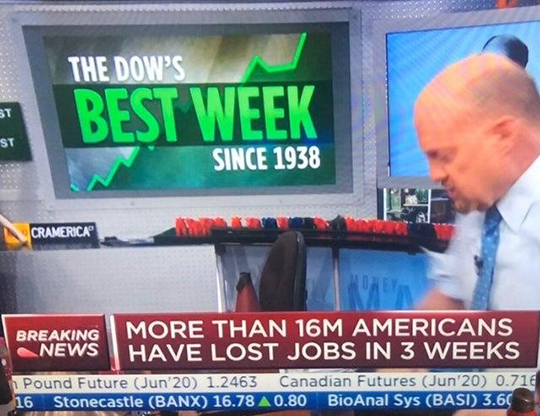 There’s a whiff of good news about the precious-metals supply squeeze.

Passenger jets aren’t flying much these days, and typically gold moves around the world in modest quantities in the cargo holds of passenger jets; bigger quantities on cargo planes would amount to staggering losses if, God forbid, the plane went down over the ocean.

Meanwhile, gold refineries in Canada, Australia and South Africa have been recognized by their governments as essential businesses. So they’ll remain up and running, if not at full capacity. (Uh, what about the U.S. Mint?)

The gold price is up slightly as a new week begins, the June contract at $1,755.

Oil traders can scarcely rouse themselves to react to “the end of the Saudi-Russian price war.”

Over the weekend, leaders of 23 nations supposedly agreed to production cuts. Supposedly, the top three producers — Saudi Arabia, Russia and the United States — are leading the way. The cuts supposedly will amount to 9.7 million barrels a day.

Can you tell we’re a little skeptical?

So are oil traders; a barrel of West Texas Intermediate is up barely 1% as we write, a penny above $23. Heck, just the rumor of production cuts a few days ago drove up the price close to $30.

There was a last-minute hitch to the agreement when Mexican leaders committed to cut only 100,000 barrels a day instead of the 350,000 Saudi Arabia wanted.

Supposedly, U.S. negotiators broke the stalemate by “pledging to compensate for the Mexican amount with 300,000 barrels of reductions of its own,” according to The Wall Street Journal.

“It couldn’t be determined whether that was in addition to other U.S. cuts, or how the U.S. cuts would be implemented.”

In most of the world’s major oil-producing countries, the state calls the shots. Certainly that’s the case in Saudi Arabia and Russia. U.S. production, in contrast, is in private hands; regulators can’t just tell those private hands to open and close the spigots on command to achieve X or Y price target.

Or is that no longer the case in America?

Feels like there’s a name for that sort of thing. It’s on the tip of the tongue. Starts with an “s,” we think…

The White House wants you, dear taxpayer, to pick up the tab for American companies looking to bring their Chinese operations back home.

Write Kenneth Rapoza at Forbes, “To bring the supply chain back to the United States would, in most cases, require hefty capital expenditures — entire new factories or additions to existing ones. It means any profit companies are counting on due to lower costs in China would be erased as they shift gears out, spending millions of dollars more to do so.”

Should this harebrained scheme come to pass, it ought to be a torches-and-pitchforks moment — assuming public protests are allowed again, of course.

It comes back to a rant of ours a little over a year ago in the B.C. — before coronavirus — era. We’d had it with American CEOs complaining about “intellectual property theft” and “forced technology transfers” on the part of the Chinese.

No one held a gun to these CEOs’ heads. They made the conscious decision 15, 20, 25 years ago to do business in a country where there’s no “rule of law” as we Westerners would understand it.

They decided to throw caution to the wind anyway because the growth potential of the Chinese market was so freakin’ huge that they felt they couldn’t pass it up.

Then the great Chinese growth engine started to sputter. Their gravy train was coming to an end. Only then did they start whining to Washington about how the Chinese aren’t “playing fair.” Only then did they abandon their decades-long anti-tariff stance and demand protection from Washington — at the expense of you and me.

So of course, a taxpayer subsidy for “re-shoring” is the next logical step. Why not?

We’re reminded of radio host Charles Goyette’s vivid analogy: “America’s national government has moved way beyond a political spoils system. America has become a piñata: Everybody gets a crack at it. Presidents and other elected officials pass the big stick around as a reward to those who help keep them in charge of the piñata party.”

We’re surely headed back to an era of “new taxes and weird fees” — an ongoing theme of ours coming out of the last crisis.

Revenue is cratering for state and local governments… and unlike Uncle Sam, they can’t print money to cover their costs. They’ll look for novel ways to nick you — like the infamous “flush fee” that folks in western Maryland pay, supposedly to clean up the Chesapeake Bay on the other side of the state.

It occurs to us the Boston suburb of Beverly, Massachusetts, has come up with a twist on the concept for the coronavirus era. 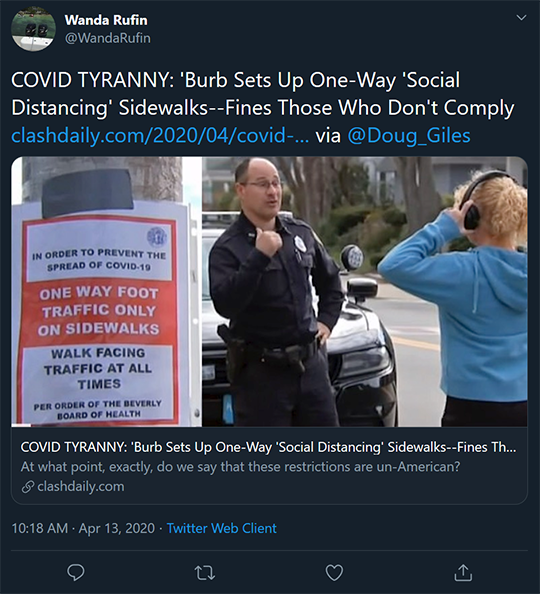 “Locals who are walking in opposite directions along bustling Lothrop Street must now use separate sidewalks so that they are not brushing up against one another,” says the Daily Mail. Violators face a $100 fine.

But that’s not the juicy new revenue source, we suspect. Most people quoted in the Daily Mail article are all for it. (Of course, folks in metro Boston have been well-conditioned to follow orders after the Boston Marathon bombing in 2013, when “shelter in place” first entered popular usage.)

Think about it. What if you reach your destination and you’re on the wrong side of the street?

Yep, the jaywalking fines are gonna be epic.

“ChiMerica,” reads the subject line of an entry in our mailbag.

“So why hasn't anyone pointed out that China, with its hybrid communism/capitalist model contains ‘commune,’ as in communal — where the government OWNS ‘communally' the assets of the state? And capitalism is just an afterthought to OWN MORE STATE.

“Haven't we crossed the line with these rounds of government purchase programs into the realm of THE STATE OWNS COMMUNAL DEBT AND ASSETS??? And now we become a hybrid capitalist/COMMUNAL country where there is NO separation between government assets and private assets… and we are really now becoming ChiMerica. Stocks are next. Private land after that.

“Oh, wait, our leadership would like to control all the assets — private or public. More fun that way.

“We have lost our collective minds.”

P.S. Early this morning, I got an email reminding me it’s Thomas Jefferson’s birthday. So if it seems as if your editor is in an unusually ****-tastic mood today, there’s the proper context in which to contemplate today’s laundry list of failures and outrages.

Later this week we’ll get in-depth about rising food prices. They’re coming. And they probably won’t be a temporary thing.