“Investors know that the Fed can’t buy cruise ship tickets, fill baseball stadiums or go to a restaurant, which is what the economy really needs,” says portfolio manager Joe Foster of the VanEck fund family.

Instead, Mr. Foster outlines the futility of the Fed’s new round of quantitative easing (QE), that kicked off with an emergency interest rate cut on March 3… and another less than two weeks later.

“Much of the Fed’s efforts [have been] aimed at injecting massive amounts of liquidity into credit markets that… seized up,” he notes. This as “the Fed… signaled unlimited purchases of Treasuries and mortgage-backed securities.

“Incredibly,” says Foster, “cracks have even emerged in the market for U.S. Treasuries, as they sold off with the stock market on some days.”

In contrast: “Gold has performed as a hedge against both the turbulence and the inflation that might eventually come from all of this intervention,” Foster says. (Heh… one can imagine the air quotes around the word intervention.)

“Gold has outperformed most asset classes so far in this latest market sell-off,” he says.

It should come as no surprise that Mr. Foster’s a gold ambassador considering he works for VanEck — the company that created the first gold-miner mutual fund in 1968, when it was still illegal for Americans to own bullion.

That being said, there’s really no contest when it comes to gold’s performance… 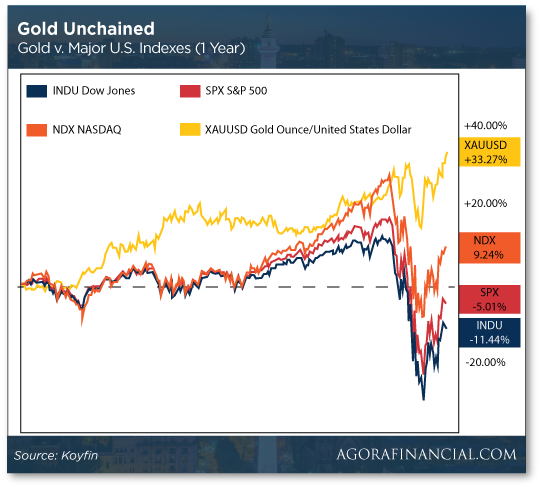 “Gold rose… to a fresh seven-year high of $1,703 on March 9,” Foster says. Then “as the market panic gained momentum, gold was sold as a source of liquidity for margin calls, redemptions and risk-off positioning. The monthly low of $1,451 came on March 16…

Not that gold hasn’t experienced sturm und drang along the way; in particular, “gold stocks have roughly tracked the broader stock market through the crash to date,” Foster says. “This,” he notes, “is normal gold equity performance in a crash and the drawdowns so far are less than that seen in 2008.”

With the Panic of 2008 in mind — and now the Pandemic of 2020 — Mr. Foster invokes the late-boom stage of the boom-bust cycle… something The 5’s been warning readers about for the last 18 months (at least)…

“Now comes the mother of all catalysts,” he says.

“While there is endless speculation on what the future holds for the [U.S.] economy and the markets,” says Foster, “we bracket our outlook between best- and worst-case scenarios…

Not to get all The Road on you…

Foster concludes: “Hoping for the best but preparing for the worst is an appropriate strategy.” Umm… yeah.

“Financially, we believe gold… should be part of that strategy as a hedge against turmoil.”

And we’re especially pleased to be working with HAA at a time like this when precious metals are more important than ever for people who want to preserve their wealth.

So take some time today to explore what Hard Assets Alliance can do for you; jump on their easy-to-navigate website or, if you prefer, you can call their toll-free phone number.

With some of the best premiums around, it only takes minutes to set up an account to buy and store gold… silver… platinum… and palladium in one of six secure vaults.

And — as we’ve mentioned before — Agora Financial purchased a stake in Hard Assets Alliance so we get a cut of the fees. But we wouldn’t have bothered investing if we weren’t convinced HAA serves everyday investors looking for exposure to precious metals. Again, here’s the link.]

Seems appropriate to check on gold first today before we outline the rest of the market’s comings and goings — the yellow metal’s pat at $1,756.90 per ounce.

And riffing on something we mentioned yesterday, our analyst Greg Guenthner says: “Welcome to earnings season!”

[Aircraft giant Boeing must be getting ahead of its own bad press — er, earnings announcement — that’s scheduled later this month; the company reports cancellations of 150 orders for its controversial 737 Max jets in March. Execs signalling Brace for impact?]

We expect deplorable first-quarter earnings reports to ooze out over the next couple weeks… but hey, Greg says: “The market’s not completely spooked yet and futures are holding steadily in the green so far today.”

Which leads to this gem we spotted at CNBC… 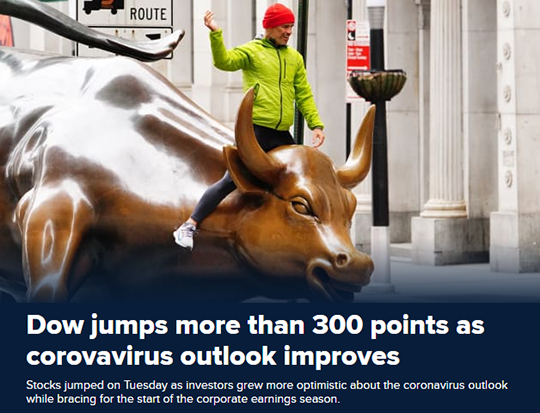 And that didn’t last long: Oil’s marginal gains yesterday have disappeared as the price for a barrel of West Texas crude’s plunged 5% to $21.19.

“At this point,” says Jim Rickards, “it’s fairly clear that the presidential election will feature Donald Trump versus Joe Biden.” (Clear to everyone except Joe Biden? That was low… apologies.)

Jim continues: “Until recently, my models showed Trump as a 70% favorite to win reelection, with a time factor that improved his chances by 2% per month. This means that if nothing changed, Trump would be an 86% favorite to win on Election Day.

“Yet things did change.” And how…

“The principal factor in my election model… was the probability of a recession before Election Day,” says Jim. “No president seeking reelection to a second term has lost in the 20th or 21st centuries unless a recession occurred late in his first term.” Think Jimmy Carter and George Bush the Elder…

To Jim’s way of thinking, the odds of a recession are 100%, meaning now Trump’s — or Biden’s — chance of winning the election is 50/50. “Suddenly, the election has gone from being close to a sure thing for Trump to a coin toss,” Jim says.

A moment of Zen: With fewer drivers on the road because of sheltering-in-place measures, one despised company is seeing a dent in revenue.

According to Business Insider: “Redflex, an Australian company that operates ‘traffic safety programs’ in roughly 100 U.S. and Canadian cities, warned that less traffic and suspended construction amid the pandemic will be a stress on its balance sheet.”

Are you tearing up yet?

The company’s regulatory filing says: "We anticipate our revenue… will be impacted broadly in line with the reduction in traffic volumes as well as the duration of the disruption."

TechDirt — getting snarky here — notes: “There are several competitors in the crowded ‘worst traffic cam ever’ field, but Redflex did everything it could to stay ahead of the pack.”

How did Redflex get to be the worst of the worst?

According to TechDirt: “Redflex is a terrible company with terrible ethics and terrible products…

“If the virus manages to take out Redflex, we'll at least have one thing to thank the pandemic for.”

[Speaking from personal experience, I say good riddance. While it’s unclear whether Redflex operates the camera ticketing program in Baltimore — where Agora is headquartered — we see the company lobbied the city for the opportunity in 2014. And as someone who once had to shell out $430 to Charm City in likely bogus fees… buh-bye!]

A reader responds to yesterday’s episode of The 5: “OK, we know Mr. Kudlow isn't a star thinker and maybe he doesn't know how taxes work, but 100% expensing isn't literally paying the moving expenses of companies.

“If they are profitable, they would essentially get a 22% discount. Write-offs don't do you much good if you aren't profitable.”

The 5: We concur on all points… including Mr. Kudlow isn’t a star thinker.

Our next reader comments on rising food costs: “My household ordered more food this morning, especially the meat variety, when I saw who all had to shut down in the meat-processing industry.

“It is such a Catch-22 supply decrease with retail demand up but no restaurant service. Prices are up for the consumer, but the producer at the agriculture level will eventually lose, as there is no market for his product, just like they are doing now, dumping milk.

“Eventually, producing stock cows and sows will hit the market and reduce herd sizes. So supplies will shrink in the next nine–12 months, about the time that demand may uptick, with a falling dollar to boot.

“Hmm, maybe I need a bigger freezer for more beef, pork and chicken… and I could store my gold there also.

“Oh yeah, we expanded the garden and bought a big All American Pressure Canner last week.”

The 5: We like the return of the “victory garden” — assuming you can get seeds, and Dave might have more about that tomorrow from his post in Michigan — but we can think of better places than a freezer for our reader’s gold. Heh…

P.S. Instead of storing precious metals in your freezer — like our reader today — why not consider Hard Assets Alliance?

At the risk of repeating ourselves, Agora Financial purchased a stake in the Hard Assets Alliance, meaning we’ll get a cut of the fees (among the industry’s lowest). But we wouldn’t have made the investment if we weren’t thoroughly impressed by what Hard Assets Alliance does for everyday folks who want to protect their wealth.

And there’s no easier way to buy and hold real physical metal. With a single click, you can buy and store gold, silver, platinum and palladium in your choice of six audited vaults worldwide. Follow this link to set up an account.