Off With Their Heads

“It is simply no longer possible to believe much of the clinical research that is published, or to rely on the judgment of trusted physicians or authoritative medical guidelines.”

So wrote the editor of the prestigious New England Journal of Medicine. In 2009.

Added the editor of Britain’s equally prestigious The Lancet in 2015: “The case against science is straightforward: Much of the scientific literature, perhaps half, may simply be untrue. Afflicted by studies with small sample sizes, tiny effects, invalid exploratory analyses and flagrant conflicts of interest, together with an obsession for pursuing fashionable trends of dubious importance, science has taken a turn toward darkness.”

We don’t wish to downplay the threat posed by a pandemic. But you see how “science” is a lot more squishy than the scientists care to let on much of the time.

That’s worth keeping in mind whenever the Establishment bows at the feet of Anthony “Dr. McDreamy” Fauci as he pipes up about the need to maintain lockdown until… well, whenever “the science” says it can be lifted. “Listen to the scientists,” right?

➢ Recovered history: On Feb. 17, Fauci described the danger from coronavirus as “just minuscule” in contrast with the “real and present danger” of flu.

And it’s worth keeping in mind as Harvard researchers issued the following proclamation this week: “Under current critical care capacities… the overall duration of the SARS-CoV-2 epidemic could last into 2022, requiring social distancing measures to be in place between 25% and 75% of that time.”

Hey, we warned you last month that on-again, off-again “intermittent distancing” would become a thing.

As we said on Monday, coronavirus has given space to all manner of control freaks and power trippers. Chief among them lately is the governor of the state your managing editor calls home. 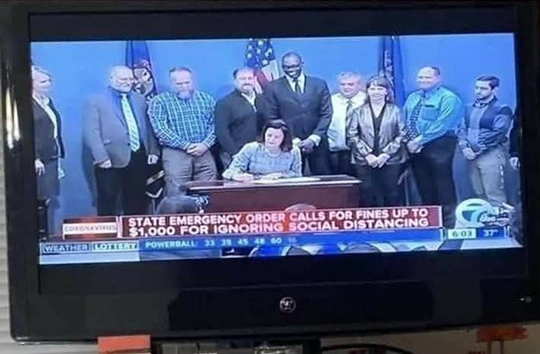 “Social distancing for thee, but not for me…”

As the Michigan-focused nonprofit news site Bridge points out, the order “is more sweeping than those in other states, barring the sale of paint or plants at stores, lawn services, the use of power boats (but not kayaks) and most travel to cottages and second homes.”

Really, the orders bring new meaning to the words “arbitrary” and “capricious.” Whitmer’s approach to governance the last few days reminds us of the Queen of Hearts from Alice’s Adventures in Wonderland and Through the Looking-Glass.

Like the queen, Whitmer seems to believe “as many as six impossible things before breakfast.” F’rinstance…

Doesn’t the purchase of lotto tickets involve a lot of, you know, touching stuff? (Wouldn’t know, never done it myself.) Of course, the lottery is a revenue source. Can’t shut that down, right?

But the most infuriating thing is the bewildering limits on people who merely wish to feed themselves. 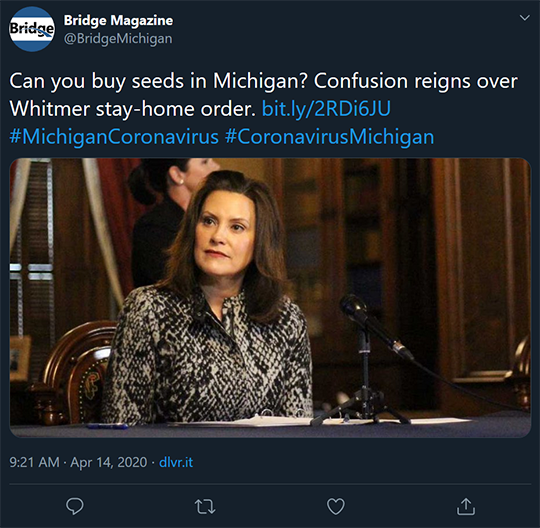 This is a time when food banks are overwhelmed with demand from the newly unemployed. And when the food supply is under threat as the virus sidelines food-industry workers. It’s meatpacking plants now, but the labor-intensive vegetable fields are surely next.

You’d think this is a moment when the powers that be would encourage food production via backyard gardens or community gardens. But no.

Under the order, businesses of more than 50,000 square feet must close off their garden sections.

“But many nurseries and garden centers contacted by Michigan Radio are interpreting the rule as a ban on selling fruit and vegetable plants,” reports the state’s major NPR station. “Workers at greenhouses and nurseries say it's confusing and makes no sense.”

“There’s just confusion all over the place,” Meegan Holland of the Michigan Retailers Association tells Bridge.

Bridge got this response from the governor’s office: “While the order places certain limits on how goods are sold at stores 50,000 square feet or more, it does not ban Michiganders from buying any item.”

Yes, but are smaller stores forbidden from selling these supposedly “nonessential” items? No response. So most smaller stores refuse to take any chances.

“If you’re growing them yourself, you're reducing the contact between people because you're not going anywhere,” Callie Gafner tells Michigan Radio. She works at a small garden center. “You're going out in your own garden and picking them up rather than going into the store and coming into contact with how many people?

Meanwhile, “Even victory gardens had flowers,” my gardening wife tells me. “For Pete's sake, you need marigolds around tomatoes to make them healthy and keep away pests.”

In addition, the governor is taking a page from the president and asserting her authority to bigfoot leaders at lower levels of government.

Case in point: What about old folks who can’t mow their own lawns? Might they not become subject to local fines for failure to keep up their property? “I… view lawn service as an essential service for seniors and those with special needs,” says the mayor of Warren, the state’s third-biggest city.

“Local governments shouldn’t be giving people fines during this time,” sayeth Gov. Queen of Hearts. “We are in a state of emergency. I have issued an executive order. It’s an order. Not a suggestion.”

The part about “Off with their heads!” was merely implied. 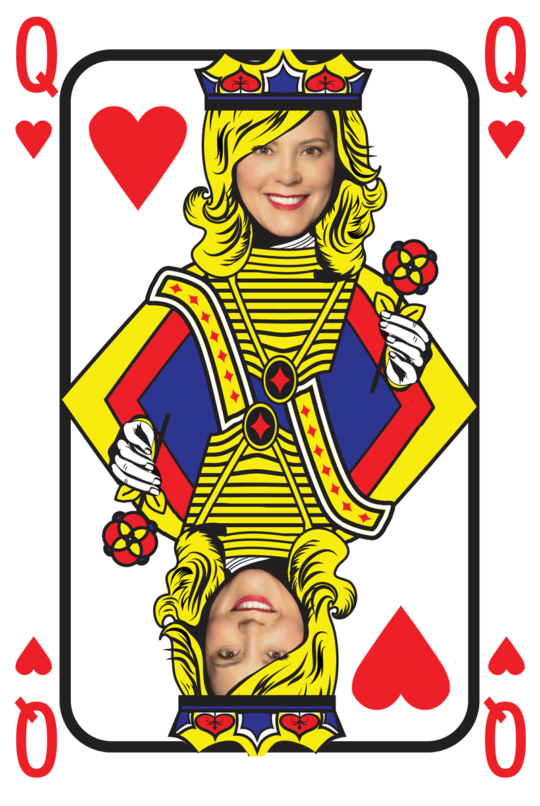 As we write, protesters are converging today on the Capitol building in Lansing — in their cars, to maintain proper social distancing, of course. “Operation Gridlock,” they call it. 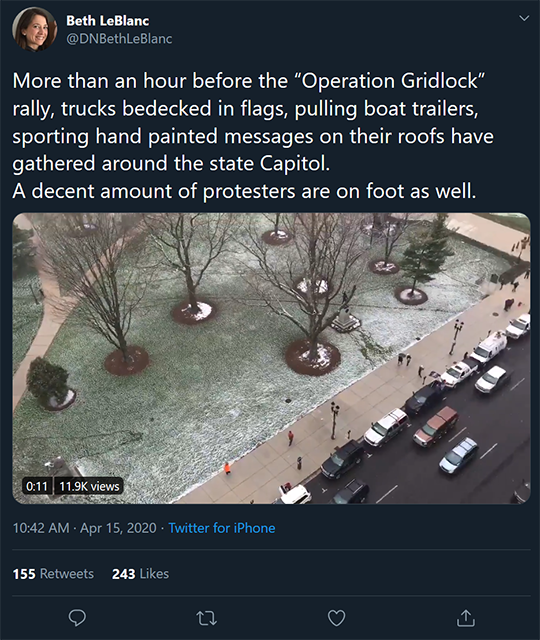 We’ve observed now and then that governments like to push the envelope, to find out just how far they can go and still retain the consent of the governed. We’ll see if the protest generates enough pushback to make any difference…

To the markets, where once again we have some unfinished business from the previous day’s trading. 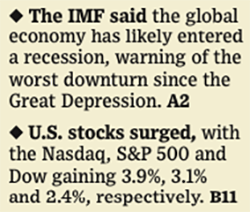 Ah, but that was yesterday. At last check today, the Dow and the S&P are both down about 2.7%. Yet again the Nasdaq is holding up better, down about 1.7%.

For one thing, it’s day two of earnings season and reality is setting in. Three of the five biggest banks reported, uhh, “disappointing” numbers, after the other two did likewise yesterday.

But wait, there’s more! We have our first so-far-in-April data points this morning…

The stock sell-off has spilled over into gold. Still, the June contract on the Midas metal is holding the line on $1,750. Crude has slipped below $20 a barrel after the Energy Department’s weekly inventory report (not surprisingly, stockpiles are up huge again).

The only beneficiary today is the Treasury market, with the yield on a 10-year note at 0.65%.

Bailouts for the airlines, debt collectors for everyday folk: That’s among the noteworthy fallout today from the $2.2 trillion relief bill otherwise known as the CARES Act.

The biggest airlines have reached agreement with the Treasury Department about the terms of their $25 billion bailout. That amount should cover, oh, the last five or so years’ worth of the airlines’ share buybacks — money they didn’t save for the inevitable rainy day. (And the agreement still can’t save the Big Four airline stocks today; they’re all down hard.)

Meanwhile, if you’re expecting direct deposit of your $1,200 payment from Uncle Sugar to cover your bills, beware.

“Congress did not exempt CARES Act payments from private debt collection,” writes David Dayen at The American Prospect, “and the Treasury Department has been reluctant to exempt them through its rule-making authority.

“This means that individuals could see their payments transferred from their hands into the hands of their creditors, potentially leaving them with nothing.”

Does that mean at least the debt collectors won’t be harassing people on the phone?

Another question: Will Steph Curry collect a windfall as a result of the CARES Act?

Congress’ nonpartisan Joint Committee on Taxation is out with an analysis of how the new law treats “pass-through” income. It concludes that more than 80% of the benefits will accrue to about 43,000 taxpayers whose annual income tops $1 million.

From The Washington Post: “The provision, inserted into the legislation by Senate Republicans, temporarily suspends a limitation on how much owners of businesses formed as ‘pass-through’ entities can deduct against their nonbusiness income, such as capital gains, to reduce their tax liability. The limitation was created as part of the 2017 Republican tax law to offset other tax cuts to firms in that legislation.”

No one other than us remembers now, but the original treatment of pass-through income in the 2017 tax law was crafted specifically so the GOP could put out a press release dunking on Curry — the NBA phenom who’s no fan of Donald Trump.

“Our legislation,” said the statement, “will ensure this much-needed tax relief goes to the local job creators it’s designed to help by distinguishing between the individual wage income of NBA All-Star Stephen Curry and the pass-through business income of Steve’s Bike Shop.”

In the final bill, the pass-through rules were as convoluted as, well, the rules of Michigan’s stay-home order. (We’re bipartisan haters around here.) As of last summer, the Treasury Department still hadn’t fully spelled out who qualified for lower pass-through tax rates and who didn’t.

Anyway, it’s a moot point now. Near as we can tell, Curry probably won’t benefit from the change unless he lost a bunch of money on real estate investments.

Finally, in this new work-at-home era, it seems some people still haven’t figured out how to keep it at least semiprofessional when hopping on a video conference. 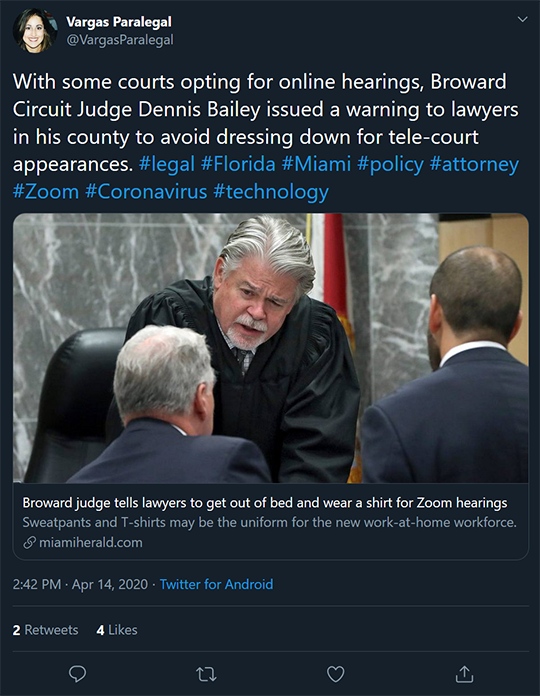 In Broward County, Florida, Judge Dennis Bailey just saw fit to issue a warning to the lawyers “appearing” in his “courtroom.”

“We've seen many lawyers in casual shirts and blouses, with no concern for ill-grooming, in bedrooms with the master bed in the background, etc. One male lawyer appeared shirtless and one female attorney appeared still in bed, still under the covers.

“And putting on a beach cover-up won't cover up you're poolside in a bathing suit. So, please, if you don't mind, let's treat court hearings as court hearings, whether Zooming or not.”

Perhaps Bailey is envious. After all, he’s obligated to wear his robes (as opposed to his robe) while court is in session…

P.S. I recently recorded a brief video from my own (highly presentable) home office.

It’s about “fake news” — but not the political kind. 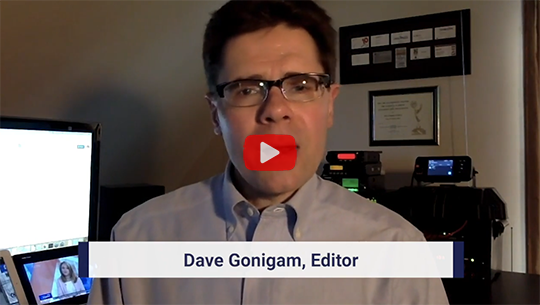 Instead it’s about fake financial news… how a powerful data tool can detect bogus media narratives… and how you can put that tool to work for hefty gains. (Only yesterday, some of our readers booked a 50% gain in the space of a week.)

Check it out for yourself at this link.