“These are dark times for the bullion banks,” says precious metals expert Craig Hemke at Sprott Money. “Will these banks be able to scrounge up enough physical metal to keep their scheme afloat?” he asks. “That remains an open question.”

The 5 returns today to the yawning gap between the price of “paper gold” — futures, options, ETFs — and the much higher price of the real thing.

Even DoubleLine Capital’s legendary CEO Jeffrey Gundlach weighed in on the issue, wondering aloud if gold ETFs are little more than “speculative vehicles.”

Now Mr. Hemke’s following the breadcrumbs of yet another speculative gold vehicle…

“We've been warning of the outrageous volume of Comex EFPs (exchanges for futures of physical) for years,” he says.

An EFP is a private agreement between two parties that involves a futures contract — at an agreed-upon price and delivery date — for an underlying physical commodity. Private means a deal made “over the counter” before they’re registered with the appropriate exchange; in the case of gold, that’s Comex.

If that sounds, uhhh, something less than transparent, you’re getting the idea.

Hemke continues: “For the calendar years 2018 and 2019, the Comex swapped out over 14,000 metric tonnes of contracts for alleged ‘physical metal’ in London.

Here’s the pickle: When the Fed announced unlimited quantitative easing on March 23, the price of gold rocketed $100 per ounce. And “a party or parties [wanted] actual… delivery of Comex 100-ounce bars through EFP,” Hemke says. The next day, Tuesday the 24th, Comex was forced to acknowledge it didn’t have 100-ounce bars to deliver. Oopsie…

To the rescue? Comex’s parent company — CME Group— and the London Bullion Market Association (LBMA) issued “a joint announcement on Wednesday, March 25, that a new settlement contract will be set up for April 20 delivery.

“In short,” says Hemke, “with an unexpected global supply squeeze, the Comex was caught without enough deliverable gold.”

To keep up appearances, Comex — with the help of CME and LBMA — “have been able to scrape together enough gold to maintain the illusion of physical delivery thus far through the April 20 delivery period. But it hasn't been easy…

“There have already been nearly 30,000 contracts delivered this month…more than 3X the average volume of Aprils past,” Hemke says. So what’s to come in May? Or June?

Meanwhile, gold “apologists” claim “moves such as fractional ownership of London bars are just simply a nice new service that the banks are providing.

“If that was the case, then why is the CME/LBMA demanding complete secrecy from the Commodity Futures Trading Commission regarding this new arrangement?” 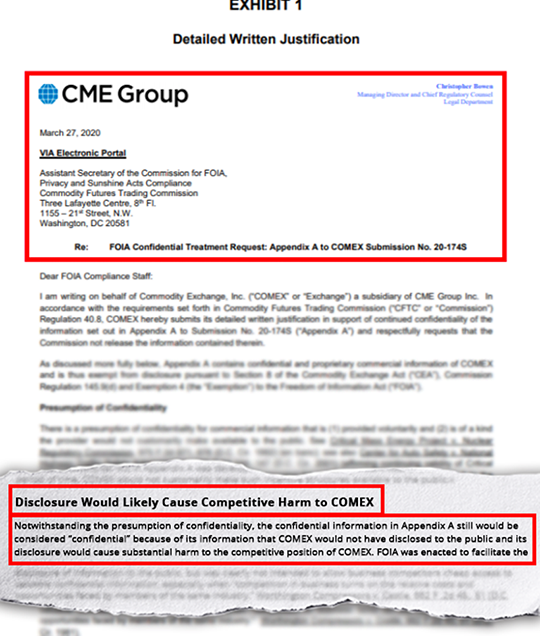 Indeed. CME Group appealed to the CFTC — sorta the SEC of the commodities trading world — to deny a Freedom of Information (FOIA) request that would’ve blown the lid off Comex’s shady “fractional” ownership scheme… or house of cards?

And the FOIA request was rubber stamped: DENIED.

“IT'S ALL ONE BIG MASSIVE SCAM!” Hemke says. “The bullion banks have managed a just-in-time delivery scheme through increasingly mind-blowing amounts of promissory notes, delivery receipts and unallocated accounts,” he says.

The smoking gun? “The LBMA actually admitted to a total trading volume of 32,255 METRIC TONNES of gold IN MARCH ALONE!” Hemke says. “That's an annualized run rate of over 380,000 METRIC TONNES or about 135 years of global annual mine supply! WHAT?!?!”

[Wait… March? Wasn’t that when the pandemic went prime time in the U.S.? When “refineries, miners and mints all shut down in response to the coronavirus pandemic”? Hmm.]

Hemke says: “These banks are finally being called upon to deliver metal against their fraudulent contracts,” including “their fractional reserve scheme,” proving, “once and for all, that there is no transparency, fairness and honest operation within the bullion bank…

“It is abundantly clear that the scramble for physical gold… is on,” he concludes.

[Ed. note: Unlike many retailers, Hard Assets Alliance isn’t scrambling to find precious metals. And alongside competitive rates that most dealers can’t touch, HAA is a model of liquidity.

If you’ve been put off by the complexity of buying precious metals in the past, there’s no easier way to buy and hold real physical metal. Or — if you prefer — with a single click or toll-free phone call, you can buy and store your metal in one of six audited vaults worldwide. You can follow this link to set up an account.

Note that last year, Agora Financial purchased a stake in the Hard Assets Alliance. So yes, we’ll get a cut of the fees (which, again, are among the industry’s lowest). We wouldn’t have made that investment, however, if we weren’t already impressed by what Hard Assets Alliance does for everyday folks who want exposure to precious metals. One more time, here’s the link.]

Another 4,971,823 people filed initial unemployment benefit claims during the week ending April 11, according to the Bureau of Labor Statistics.

“A modest decline from last week’s new claims number but still among the highest levels in U.S. history,” The Tax Foundation notes. 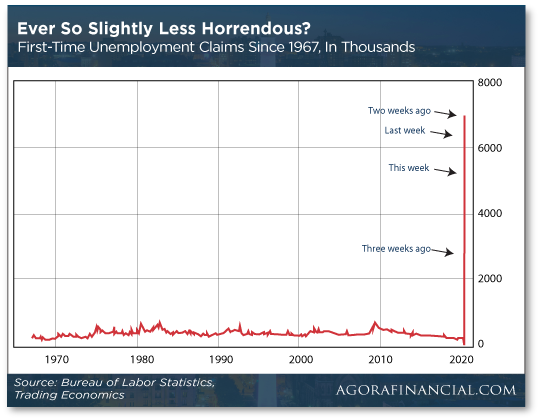 “Mandatory business closures and shelter-in-place orders have radically accelerated job losses compared to the steadier pace of layoffs in prior recessions, meaning these claims likely represent a far greater share of the ultimate total than did any week’s claims during the Great Recession,” the Tax Foundation says.

“But the numbers are still staggering, with every likelihood of sobering numbers in coming weeks as well.”

With that reality weighing on us, we turn to the markets today…

Speaking of Nasdaq stocks, does Netflix co-founder Reed Hastings look like the cat that ate the canary or what? 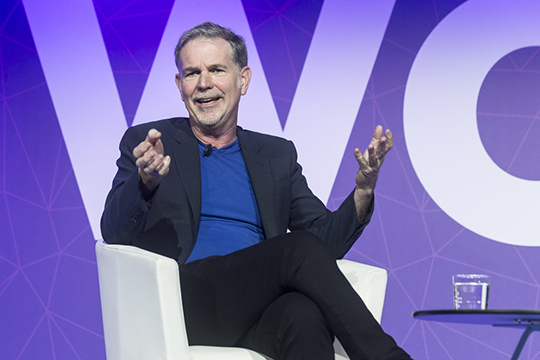 And for good reason…

Shares of the “stay at home” stock hiked almost 5% today — an intraday all-time high of $449.52. This after Goldman Sachs said to expect a stellar earnings report from Netflix next week.

Many people — ages 17–24 — won’t be getting a stimulus check if they’re claimed as dependents on tax filings.

Per the CARES Act (or the coronavirus stimulus bill) most taxpayers can expect a one-time payment from the IRS. If you don’t exceed certain income caps, single filers can expect $1,200. Filing jointly? Boom… $2,400 with an additional $500 bonus per dependent age 16 or under.

According to Vox: “Families who have dependents in the 17–24 age group are entirely excluded from receiving any money for that child, including the $500 bonus granted to their younger kids.”

[Heh… good to know since I myself have a 17-year-old… who is eating me out of house and home, I might add. The cost of groceries… oy!]

This about sums it up… with one slight correction. He’s over 17… 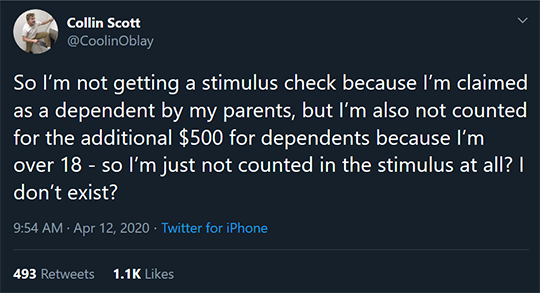 “The IRS defines a dependent as someone who relies on a benefactor for more than 50% of their expenses and earns less than $4,200 a year in taxable income,” Vox says.

And Elaine Maag of the Urban-Brookings Tax Policy Center estimates there are about 13 million Americans who fit into this category — everyone from high schoolers to full-time college students.

“The age cut-off for dependent bonuses in the CARES Act is likely ‘a relic of the tax system’ that has an ‘odd definition as to what a child is,’” Maag says.

“So sorry you were fined $430 for a traffic ticket for the horrific crime of being caught on a traffic cam,” a reader says after we reported on the *fingers crossed* near-demise of Australian company Redflex.

“It has happened to me, twice!” he says. “However, not being one to roll over and pay such an outrageous penalty for a questionable enforcement tactic, I fought the law and I won.

“When you are pulled over by a traffic cop, he asks for your driver’s license and other documents to issue the ticket. At that time, you sign the ticket when it is issued to you, verifying your identity. The officer knows it's you he is issuing the ticket to.

“When a red-light traffic cam issues you a ticket, it takes a photo of you driving your car through the intersection along with your license plate. Through the DMV, they get your address and mail you a ticket and you pay the fine.

“Another option is to fight the ticket in court. Once in court, your case will be called before the judge. You will be asked why you have chosen to plead not guilty when it's obvious that it is you in the picture behind the wheel driving. How do you respond to that?

“It may look like you and it may be your car, but they can't PROVE that it's actually you behind the wheel. It requires some stones to get up in court and deny what everyone knows is true, but if it keeps the money in my wallet, points off of my driving record and a lower insurance premium, then screw it.

“The cop prosecuting your case will not be happy. The city wants the money. But I had one judge roar with laughter at my strategy as he pounded his gavel and spoke the two most beautiful words you can hear in a court of law: CASE DISMISSED!

The 5: Thanks for the advice. Unfortunately — in my case — the words of the Bobby Fuller Four’s 1966 cover proved true: “I fought the law and the law won.”

P.S. Just when you thought the gold-supply squeeze couldn’t get any tighter…

Wednesday, the U.S. Mint announced it’s shutting down gold and silver bullion production at its West Point facility in light of the COVID-19 crisis. Because of which, Kitco says: “The physical gold market has been dealing with significant supply issues…

“And the crunch is going to get bigger.”

But Hard Assets Alliance leverages the power of its wholesaler network to meet demand from everyday retail customers like you right now — and at very reasonable premiums under the circumstances.

You’ll find all the essential details about Hard Assets Alliance at this link. Be advised that our firm bought a piece of the company last year, so we’ll collect a small cut once you fund your account. But we wouldn’t have struck that deal if we weren’t already impressed by how they take care of their customers.