Throw the Bums Out

There are 96 members of the Senate and an overwhelming number of House members who have blatantly violated their oath of office. 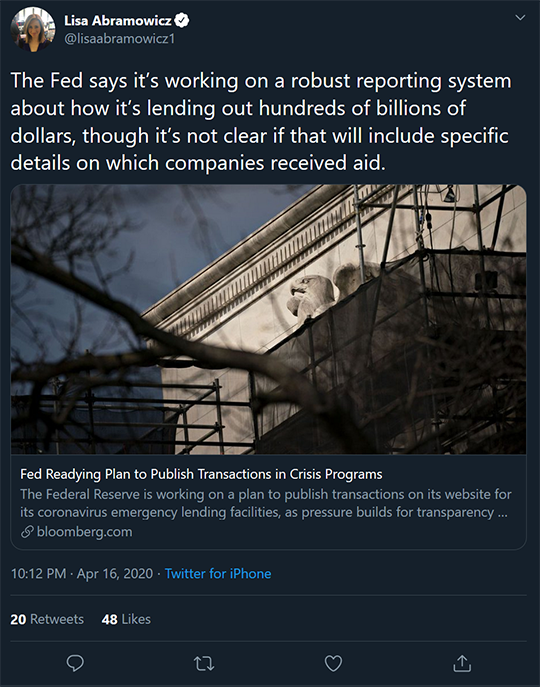 Out of the $2.2 trillion Uncle Sugar will spend under the CARES Act, $454 billion goes to the U.S. Treasury and the Federal Reserve.

Via “special purpose vehicles” and other financial sleight of hand — The New York Times actually calls it “the Fed’s Magic Money Machine” — the Fed will leverage that $454 billion into $4.54 trillion to reinflate all manner of deflated financial assets.

The Fed has spun up nine, count ‘em nine, “emergency” programs to dole out the money. One of them, which is buying up both investment-grade and junk corporate debt, will be in place for the next five years. Which says something about how long the powers that be expect this crisis to last, no?

Exactly who will benefit from this largesse — with a $454 billion taxpayer backstop if it all goes south? Who gets to take a whack at this piñata with a stick furnished by the Treasury and the Fed?

“The Fed says it is working on a system of robust reporting,” according to a Bloomberg dispatch, “though it’s not clear if that will include specific details on which companies received aid.”

So it’s your money at risk… but you’re not entitled to know, apparently.

By outsourcing these spending decisions, Congress punted on its most fundamental obligation to the people, as set out in Article I, Section 8 of the Constitution.

As The Annenberg Guide to the United States Constitution reminds us, “The power to appropriate federal funds is known as the ‘power of the purse.’ It gives Congress great authority over the executive branch, which must appeal to Congress for all of its funding.”

The Founders vested this awesome power — to decide how to spend the people’s money — in the branch of government hypothetically closest to the people, the legislature. Letting the executive branch call those shots reeked of monarchy.

The power belongs with Congress. Not the Treasury, which is an executive branch agency. And certainly not a central bank. (The Treasury and the Fed have effectively merged as a result of the pandemic, but that’s a topic for another day.)

But under the CARES Act, Congress basically said, “This stuff’s too complicated — you figure it out.”

Congress couldn’t even be bothered to set up one of those “bipartisan blue-ribbon panels” to make the decisions. As the Bloomberg article points out, “Congress could have set up its own lending board made up of Fed officials and other technocrats to oversee and dole out money. Instead, they gave the Treasury and Fed wide discretion.”

Well, OK, Congress did give a slight nod to the concept of “oversight” with the appointment of a five-member commission that in theory is supposed to keep tabs on the Treasury and Fed.

Problem is, right now that commission consists of one guy.

In theory there’s supposed to be a five-member commission with support staff. In reality, there’s a fellow named Bharat Ramamurti. His first monthly report to Congress is due on May 8.

He’s doing what he can, and that’s not much. “Money is moving around in the blink of an eye and it’s not at all clear what it all means and who it’s helping,” he tells Bloomberg.

The only saving grace is that he’s not a member of the president’s own party; he’s a former aide to Sen. Elizabeth Warren.

That’s what our system’s got for “checks and balances” in anno Domini 2020.

Only now are congressional leaders realizing what they’ve done. Yesterday, the relevant committee chairs, Sen. Mike Crapo (R-Idaho) and Rep. Maxine Waters (D-California), sent the proverbial strongly worded letters to the Treasury and the Fed, asserting their panels’ “robust” oversight of the programs.

Yeah, too late. The horse has left the barn, the train has left the station and the money is disappearing down a black hole.

We don’t want to move on from this topic without naming names.

The Senate passed the CARES Act 96-0, with four members unable to vote because they were in self-quarantine.

As we noted at the time, the House resorted to a voice vote so no one would have to have his or her name attached to a yea-or-nay vote on the most costly spending bill in U.S. history.

But The Intercept has done yeoman’s work attempting to reconstruct a roll call vote, based on the public and press statements of all 435 House members. 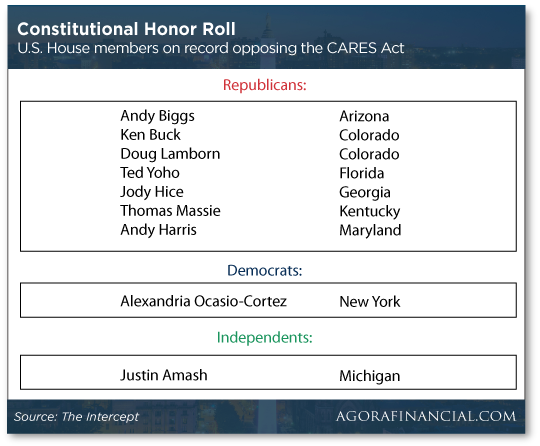 To be fair, about 50 members’ positions remain unaccounted for. You can see where your congresscritter stands — and if that information is still missing, do a little research and add to this crowdsourced project if you like — at this link.

Oh, and let’s not forget it was the sitting president who also violated his oath by signing this unconstitutional legislation into law.

Wall Street has found its way back to the rally tracks as the week winds down.

The media narrative is that hopes are rising for a coronavirus treatment; early tests by Gilead Sciences look promising, we’re told.

➢ Gilead, we’ll remind you, is the company best known for developing a hepatitis C treatment that costs $84,000. Well, that’s the cost in America. In Egypt, it costs only $900. That’s the health care piñata, thanks to Washington, D.C. — in which Americans subsidize research and development costs for the rest of the world.

The lone economic number of note comes from China… where GDP has shrunk for the first time in data going back to 1992.

Granted, we think GDP is a bogus statistical abstraction, and Chinese leaders by their own admission believe their economic figures are “man-made”… but it still makes for some (sour) eye candy today… 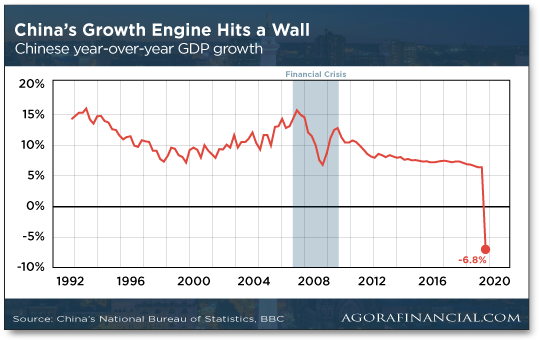 In fact, it’s getting so bad in the U.S. oil patch that the Trump administration might pay oil companies not to drill — much like the FDR administration paid farmers not to grow crops.

“The Energy Department has drafted a plan to compensate companies for sitting on as much as 365 million barrels worth of oil reserves by effectively making that untapped crude part of the U.S. government’s emergency stockpile,” says a Bloomberg story citing the usual anonymous “senior administration officials.”

“Federal law already gives the Energy Department authority to set aside as much as 1 billion barrels of oil for emergencies — without dictating where they should go. That creates a legal opening for storing crude outside the government’s existing reserve and even blocking its extraction in the first place.”

Congress would have to sign off on this arrangement before it could go forward; we imagine it’ll be slipped into the next crisis-must-act-now rescue legislation.

How exactly this is supposed to benefit, say, laid-off roughnecks in the Permian basin, we’re not sure. But it’s great for oil executives who get to take their own whack at the piñata.

Staying on the energy beat… we see U.S. electricity demand has tumbled to a 17-year low, according to a Reuters report citing the Edison Electric Institute.

It’s down 6.1% year over year, to 64,177 gigawatt hours. The last time it was that low, George W. Bush was donning his flight suit to declare “Mission Accomplished.”

We desperately need some Covid-comic relief… and the governor of Kenya’s capital Nairobi is obliging with the food-relief packages for his city. 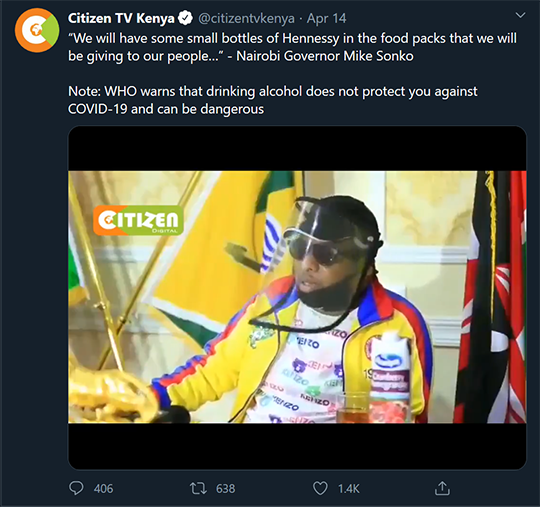 From the Reuters newswire: “Mike Mbuvi Sonko, known for his chunky gold jewelry, impromptu raps and arrest last year, posted images of Hennessy bottles tucked inside food packages with flour and other staples on social media this week.”

Cognac can “kill” coronavirus, in Sonko’s estimation. “We are giving some small bottles of Hennessy in the food packs that we are giving to our people,” Sonko said in a video — after donning a face mask and shield.

Who’d have guessed Africa’s always-colorful politics would serve up a real-life version of Leon Phelps’ “The Ladies Man” on Saturday Night Live? (OK, Phelps was more partial to Courvoisier, but still…)

Anyway, Hennessy maker LVMH is going out of its way to wash its hands — so to speak — of the whole thing: “The consumption of our brand or any other alcoholic beverage does not protect against the virus,” says a statement.

“Hogwash and the Barnum complex,” reads the subject line of a reader’s email.

“Re your Michigan lament — You should take that message in spades to the next level up, i.e., our CinC.”

The 5: We’re not sure what you mean… although you’re giving us an opening to say something that’s been bugging us for a while: Why the hell hasn’t the president fired CDC Director Robert Redfield?

Writes Shikha Dalmia at Reason: “If the United States had done what South Korea, Taiwan and Germany did and allowed private and state labs to get these tests ready for mass production, we would have been able to conduct countrywide screening almost immediately.

“Instead the CDC decided to reinvent the wheel and develop its own test. It ordered private labs to desist and told them to wait for its test — and when the agency finally rolled the test out, it didn't work. By the end of February, only 4,000 tests had been conducted and the country had no idea how fast the virus was spreading.”

Worth keeping in mind when you read the news today about how the scope of testing is still insufficient to justify easing the lockdowns, no?

By the way, the president is not “our CinC.” Or at least not mine, seeing as I’m not in the military.

I’m not being pedantic here. It’s a distinction that’s critical to our understanding of the system the Founders bequeathed us, and the perilous times we live in now.

And yet “the citizenry at large is now thought of as under military discipline,” Wills continued. “In wartime, it is true, people submit to the national leadership more than in peacetime. The executive branch takes actions in secret, unaccountable to the electorate, to hide its moves from the enemy and protect national secrets. Constitutional shortcuts are taken ‘for the duration.’ But those impositions are removed when normal life returns.”

No more, however. “The wartime discipline imposed in 1941 has never been lifted, and ‘the duration’ has become the norm. World War II melded into the cold war, with greater secrecy than ever — more classified information, tougher security clearances. And now the cold war has modulated into the war on terrorism.”

Here in 2020 the current occupant of the office and many others who exercise political power are citing a “wartime”-type emergency to justify their edicts, decrees and executive orders. And the secrecy, too — to wit, our main topic at the top of today’s 5.

We don’t know where it all ends… but wherever it ends, it’s not a good place.

Try to have a good weekend anyway,

P.S. Guess we never got around to rising food prices as promised this week. (And it’s not just about the shutdowns of meatpacking plants.) Whelp, there’s always next week…