Yeeaahhh, gimme some of that Yellow Peril. Just hook it to my veins!

The New York Times is out this morning with an account of text messages and social media rumors that briefly gripped the nation during March, unfounded rumors that the president was to order a nationwide lockdown.

“Since that wave of panic,” says the story, “United States intelligence agencies have assessed that Chinese operatives helped push the messages across platforms, according to six American officials, who spoke on the condition of anonymity to publicly discuss intelligence matters.”

Six officials and not one of them was willing to go on the record with their names. Sounds super-credible to me!

“And the apparent aim of spreading the fake lockdown messages last month is consistent with a type of disinformation favored by Russian actors — namely sowing chaos and undermining confidence among Americans in the U.S. government, the officials said.”

You have to read carefully for the inevitable climb-down: “The origin of the messages remains murky… [I]t has been difficult to trace their true origins or pin down all the ways in which they have been amplified.”

The Times story this morning is in the same league with a blame-China article from Fox News last week.

“EXCLUSIVE: There is increasing confidence that the COVID-19 outbreak likely originated in a Wuhan laboratory, though not as a bioweapon but as part of China's attempt to demonstrate that its efforts to identify and combat viruses are equal to or greater than the capabilities of the United States, multiple sources who have been briefed on the details of early actions by China's government and seen relevant materials tell Fox News.”

Again with the multiple sources, but none of them willing to go on the record or to describe how they know what they claim to know.

Gee, wasn’t there another major story in recent years where this happened over and over? Oh, right… 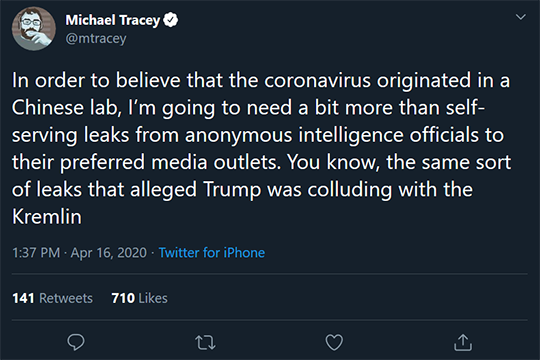 Missouri Attorney General Eric Schmitt has sued the Chinese government in federal court, seeking redress for “trillions of dollars” of economic losses in the Show-Me State.

“An appalling campaign of deceit, concealment, misfeasance and inaction by Chinese authorities unleashed this pandemic,” says the complaint.

The suit almost certainly will get laughed out of court; under the legal doctrine of sovereign immunity, it’s mighty hard to successfully sue a foreign government for negligence.

But Schmitt knows which way the political winds are blowing; there’s an old joke in politics about how “AG” stands for both “attorney general” and “aspiring governor.” Heh…

What’s more, these political winds are part of a storm that began gathering long before anyone ever heard of a coronavirus strain in China’s Hubei province.

Eighteen months ago we said Washington and Beijing were gearing up for a 30-year trade war. Last summer, we took note of how the conflict was morphing into a new Cold War — with the encouragement not only of the Trump White House, but also leading Democrats like Sen. Elizabeth Warren and Dem mouthpieces like The New York Times’ editorial board.

Now it appears the Democrats have decided one of their main campaign tactics this year will be to accuse Donald Trump of being soft on China.

Last week, the Axios political website got its hands on a memo from the Democratic National Committee. Its article begins thus: “In the coming weeks and months, Democrats plan to argue that President Trump ‘rolled over’ for China as the coronavirus crisis worsened because ‘he sought a deal to begin undoing the damage caused by his trade policies’.”

That was last Thursday. The next day, the Dems’ presumed nominee Joe Biden accused Trump of failing to hold China accountable for the outbreak.

“Donald Trump left America exposed and vulnerable to this pandemic. He ignored the warnings of health experts and intelligence agencies and put his trust in China's leaders instead.” 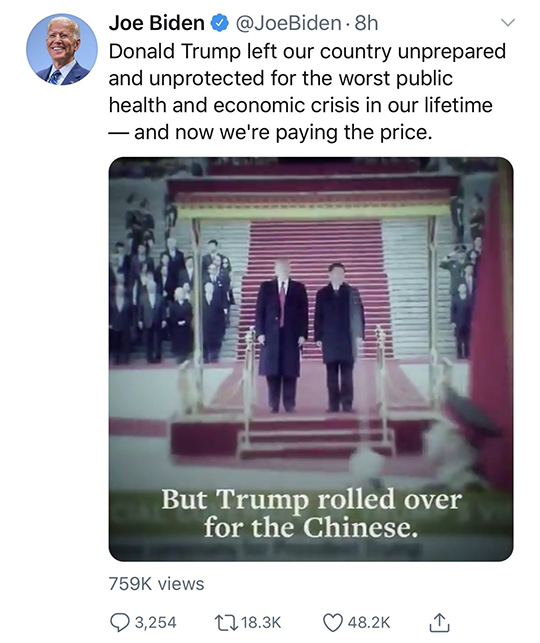 So now both major political parties will try to outdo each other amping up the confrontation with China. Which makes us wonder…

What if the biggest story of 2020 turns out not to be the pandemic but a hot war between Washington and Beijing?

Two days ago, The Wall Street Journal had this breathless story: “In recent weeks, Beijing has conducted operations to gain more of a foothold in the Spratly and Paracel island chains in the South China Sea, emblematic of China’s attempts to assert its influence around the world.”

Of course, China’s been doing this regularly since before the turn of the 21st century. But in the context of the pandemic, it’s now being framed as Beijing “capitalizing on the Trump administration’s diverted attention and the strains on its military.”

Don’t be surprised if the Dems goad Trump into a dangerous escalation and Trump takes the bait.

Of course, the whole situation begs a question the indefatigable Pat Buchanan posed a few years ago: “As we have no claim to rocks or reefs in the South China Sea — Vietnam, Taiwan, Malaysia, Brunei and the Philippines do — why is this our quarrel?”

But there’s another reason the probabilities for a war this year are especially high. We’ll get to that sometime in the next few days. Right now the clock’s ticking and we have other matters to attend to within the confines of our 5 Mins…

The oil market is stabilizing, and that’s helping the stock market do likewise.

With the expiration of May options yesterday, June is now the front-month oil contract; at last check, a barrel of West Texas Intermediate fetches $14.05. That’s still crazy low by 21st-century standards, but at least it’s not negative.

“Anyone who lost money during yesterday’s oil debacle must have worked very hard to get caught in that mess,” observes Alan Knuckman, our 29-year veteran of the Chicago trading pits.

“Why? Because brokerage firms force you out of positions when the contract is coming to an end so you can’t get caught in the nonsense of a physical-delivery futures contract.

“Only a handful of May positions were left that hadn’t been closed out, and a reverse short squeeze got the ‘smart guys’ who were playing with fire. It was strictly a May contract settlement issue, not any systemic issue. Frankly, those who lost money deserved it. I know that sounds harsh — but those are the facts!”

And we’re supposed to fear socialism if the Dems take over the White House? Seems like it’s already here…

Even as tanker ships cruise aimlessly just off U.S. shores as “floating storage” for excess oil, our “friends” in Saudi Arabia are sending more.

News emerged last week that a fleet of 18 Saudi Arabian ships are headed for the U.S. Gulf Coast — about seven times the amount taken in by Gulf Coast terminals during a typical month last year.

“The Saudi treasury requires oil prices to be about $85 per barrel just to balance the country’s annual budget. Anything less and Saudi must dip into national reserves or borrow funds to balance the books. Saudi’s goal is to flood oil markets for now and wreck the economics of U.S. oil production. Kill the competition.

“When most of the North American oil biz has been crushed, you can be sure that Saudi will jack the price of oil back up into that $85 range — if not higher.”

Which makes the following headline even more enraging… 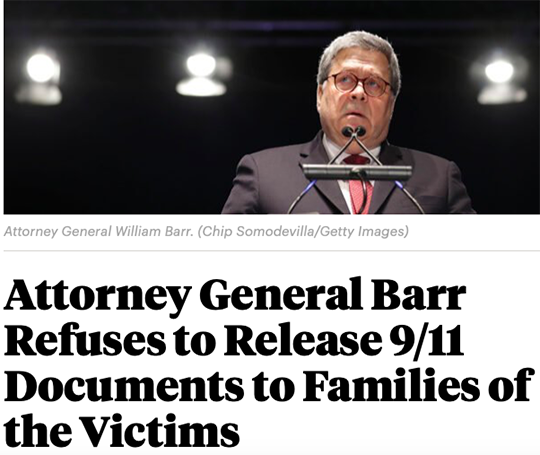 Several families who lost loved ones in the Sept. 11 attacks are suing the Saudi Arabian government for aiding the hijackers. They want to open up FBI files to help their case.

But Attorney General William Barr is doubling down on the Justice Department’s claim that the information is a state secret. The ProPublica site reports that in a series of court filings last week, Barr asserted “that further disclosures about Saudi connections to the 9/11 plot would imperil national security.”

Why? “The administration insisted in court filings that even its justification for that secrecy needed to remain secret.”

“Who are they protecting?” wonders Steven Pounian, a lawyer for the families.

We know from the “28 pages” released 14 years after the original Joint Congressional Inquiry in 2002 that there was a fairly direct money trail from Saudi Arabia’s longtime U.S. ambassador, Prince Bandar, to the San Diego cell of hijackers that crashed into the Pentagon.

A handful of senators have written the Justice Department, pretty-please asking the agency to be more forthcoming. We’re not holding our breath…

The feds are about to take another whack at helping small business, since the first one was such a colossal botch.

Last night the Senate passed a $484 billion spending bill, of which $310 billion is earmarked for small business.

Of course, the $2.2 trillion spend-a-palooza last month included $350 billion for small business. But according to figures from Morgan Stanley, about $250 billion of that total went to publicly traded companies with market caps of at least $100 million.

Early in the Trump administration, we would ask now and then, paraphrasing Sarah Palin, “How’s that swampy-drainy stuff workin’ out fer ya?” We’d have never guessed it would work out this poorly…

We’re not done with the media-bashing today; your editor’s old-school journalism ethos can’t overlook this one, either… 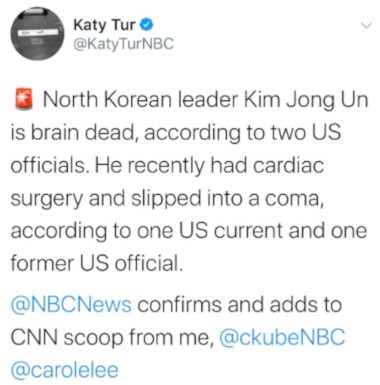 But the only source of that news was a single South Korean media outlet, Daily NK, citing a single source.

And as the often-insightful Moon of Alabama blog points out, Daily NK was founded by North Korean defectors and gets some of its money from a U.S. government-funded nonprofit, the National Endowment for Democracy. There just might be an ax to grind there, no?

We’ll end where we began today, with The New York Times. After the story didn’t pan out, the next news cycle generated this headline from the Gray Lady: “Speculation Over Kim Jong Un’s Health Is Fueled by North Korea’s Own Secrecy.”

Because our own government is so transparent or something, right?

(There we go, “sowing chaos!” We assure you any chaos or discord you read in this e-letter is entirely homegrown.)

P.S. Really, the panic this Kim story inspired was nuts, especially on prepper/patriot message boards — even among some folks in that community who usually know better. Oy…

P.P.S. A quick follow-up from yesterday, via the Miami Herald…

“Miami Democratic Rep. Donna Shalala, the lone House Democrat on the committee set up to oversee $500 billion in taxpayer money being used for coronavirus-related payouts to large businesses, violated federal law when she failed to disclose stock sales while serving in Congress.”

Will it actually be enough to get her kicked off the committee? Or are the swamp waters in D.C. that deep? Stay tuned…