Gold Plays Hard to Get

“Think of the pandemic as the pin that punctured the credit balloon,” says John Hathaway, a senior portfolio manager at precious metals giant Sprott Inc.

“The fiscal and monetary policy damage committed by all governments to save the world has created a debt hangover that will linger for years,” Hathaway says.

So even under the best of circumstances — the coronavirus curve flattens significantly and an effective vaccine is introduced — the economy’s not going to return to business as usual immediately.

“Whether this landscape evolves into a long stretch of deflation or combusts into untamed inflation remains to be seen,” he continues; either way it’s “negative for real returns on fixed income or equities.”

But undeniably positive for gold…

“Despite the solid price gains achieved by gold in the past two years,” says Hathaway, “there is much more upside to come.”

This “as investors gradually give up on repeated equity market bottom fishing and the hope of a return to financial market normalcy” per the wrongheaded advice of financial gurus who’ve widely “suppressed interest in the metal as a risk mitigator and portfolio diversifier,” Hathaway says.

“Despite enthusiastic advocacy and much chatter from investment luminaries, including Ray Dalio, Jeff Gundlach, Seth Klarman and others,” he says, “gold remains severely and inappropriately underrepresented in the portfolios of fiduciaries, endowments and family offices.”

But how long will it take for investors to shake off misconceptions about gold given the precious metal has outperformed stocks, bonds and the U.S. dollar for most of two decades? 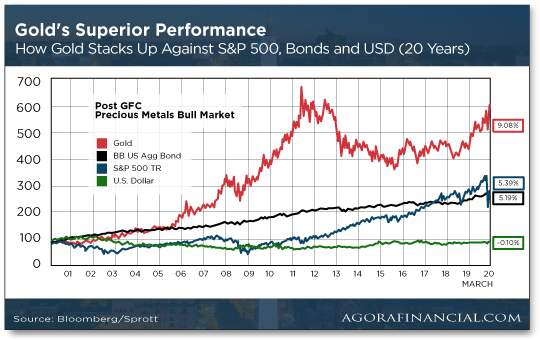 Hathaway continues: “Contrarians and value investors, take note! The secular gold bull that began in 2000 and corrected for a few years has returned to life with renewed vigor.”

And that’s fabulous news for gold bugs: Aside from owning the world’s most sought-after commodity right now, you’re no longer considered “fringe” investors. (But if you’re good with the “fringe” designation… well, you do you.)

That’s according to Sprott Inc. CEO Peter Grosskopf, who tells Bloomberg: “Everybody wants to reexamine gold and it’s not a fringe asset anymore. We’ve been run off our feet,” he says.

More like some serious desk jockeying: “Even though we’re operating virtually, we cannot keep up with the demand to speak with new clients or interested clients. It just keeps climbing.”

So instead of layoffs at Sprott, the asset manager is hiring additional staff to manage the workload in what’s turned out to be the firm’s busiest season ever, even exceeding demand during the Great Recession.

To give you an idea, Sprott’s inflows were four times greater in March than the previous two months of 2020. “In value terms,” Bloomberg says, “they reached almost $500 million in the first quarter, with more than $400 million going to the Sprott Physical Gold Trust, compared with outflows of $178 million a year earlier.”

And what’s not to like about gold right now? 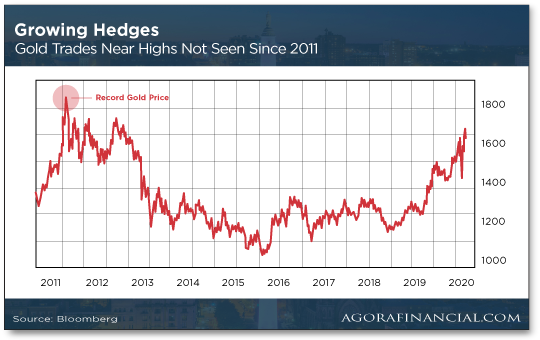 The demand for gold has propelled its price to levels not seen since before the yellow metal peaked in 2011 at $1,921.17; in the last couple weeks, gold’s broken through key resistance of $1,700 per ounce.

This as central banks have employed increasingly desperate measures to prop up beleaguered economies hit by the pandemic. Mr. Grosskopf says: “We’ve entered into an environment of the monetization of debt and the debasement of currency, and all of these governments believe they can control that process; history suggests that they cannot.

“Gold is the way to hide from that,” he says.

That is if investors can get their hands on real, physical gold…

“Spreads between spot prices and futures blew out in March as supply chain disruptions sparked concerns about a gold-bar shortage in New York” — a story The 5 detailed last week.

And the squeeze has revealed the sum of physical gold in circulation equals a tiny percentage of outstanding contracts… to say nothing of the physical gold that should back “paper” gold futures, options and ETFs.

For that reason, Grosskopf says: “We do think it’s going to become a long-term preference for investors to have fully allocated, physically backed storage and that’s a big difference to the way this market has functioned in the last 10–20 years…

“You do not need to be a gold bug to believe that gold is the right move to hedge yourself against the financial system right now,” he concludes.

[Ed. note: The traditional portfolio structure — 60% stocks and 40% bonds — might be a loser going forward as bond yields sink… but bond prices correspond with stocks.

All that to say bonds aren’t the hedge protection they once were — they won’t safeguard your portfolio from market volatility. On the other hand, gold is quickly becoming the hedge of choice.

As we’ve said, physical gold is preferable to the “paper” variety. Trouble is, gold’s hard to come by in this market. Enter Hard Assets Alliance that’s still stocked with physical precious metals to meet investor demand.

If you’re looking to protect your wealth going forward, follow this link to set up an account. There’s no pressure to fund your account immediately if you still want to learn more. To that end, the Hard Assets Alliance website is easy to navigate or — if you prefer — you can call their toll-free number for more information.

Note that Agora Financial purchased a stake in the Hard Assets Alliance, so yes, we’ll get a cut of the fees (which are among the industry’s lowest). We wouldn’t have made that investment if we weren’t impressed by what Hard Assets Alliance can do for everyday investors.]

“Everyone will remember this week because of the complete annihilation of the May crude oil contracts,” says Alan Knuckman, our trade veteran at the CBOE.

“But let’s not forget that the stock market has bounced back,” he says. “We’re back above the halfway point of the drop from the top on the S&P.”

Alan notes: “Even the oil rout couldn’t hold the S&P below [2,800] longer than a single trading day…

As for market winners and losers this week, Alan says tech stocks have propelled the Nasdaq up 22% off March lows, whereas small-cap Russell 2000 stocks lagged behind, up just 6% in the same time.

The one economic number of note has a buncha asterisks attached to it today.

Orders for durable goods — anything designed to last three years or more — collapsed 14.4% in March, more than expected.

First asterisk: The number was skewed by collapsing orders for aircraft. Second asterisk: Most of the shutdowns didn’t kick in till the second half of the month. Next month will tell a more reliable tale…

“Could cannabis help treat COVID-19?” asks our pot stock authority Ray Blanco. “It’s not as crazy as it sounds.”

In fact, it’s something Ray wondered way back in February — before sheltering in place and the massive economic shutdown. “Now a hospital in Israel is trying to find out,” he says.

Ray continues: “Doctors are trying to see whether the antiviral properties of cannabis compounds could be a novel tool against the disease.”

“Meanwhile, here at home, folks are making use of their $1,200 stimulus checks on cannabis,” Ray says.

According to Green Entrepreneur: “Jane Technologies, a popular online cannabis marketplace, found a 48% sales increase on Wednesday, April 15, 2020, compared to an average day.”

Ray notes: “April 15… is the day by which 50–70 million Americans with direct deposit saw the cash hit their accounts.”

Whatever gets you through?

“It’s a good confirmation of our thesis that cannabis sales should be treated like other recession-resistant vices when times get tough,” says Ray.

“Folks may cut back on some expenses amid the COVID-19 crisis, but they’ll double down on inexpensive luxuries and distractions like cannabis.” 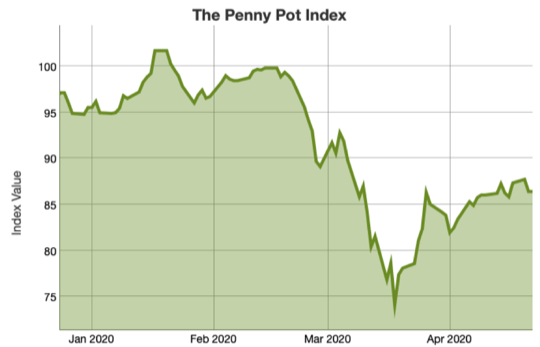 “Our [proprietary] cannabis index has surged about 17% over the course of the last month, as investors have started waking up to the fact that pot companies are much better positioned in this crisis than many realized.

While Ray expects to see the separation of the wheat from the chaff when it comes to solid versus “garbage” cannabis companies, in general he says: “Long term, I’m as positive on legal-pot stocks as ever.

“Huge opportunities abound in the wake of the COVID-19 crash. And cannabis potentially holds the keys to countless new therapies on the horizon.”

[Policing COVID-19] A couple in Victoria, Australia, was fined A$3,304 after posting a picture on Facebook. Jazz Mot told Australia’s 7News: “I posted the photos that we took in Lakes Entrance in June last year.”

Afterward, the police arrived at Mrs. Mot’s home and ticketed her and her husband for “going for a drive to Lakes Entrance (nonessential travel).” 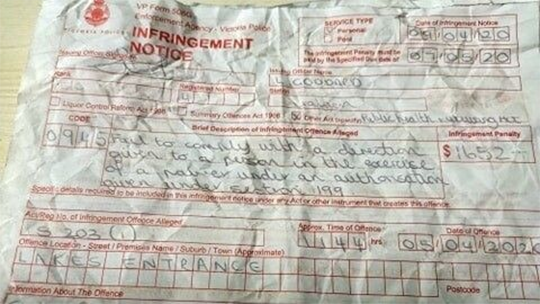 Husband and wife were each fined A$1,652 — or $1,053 USD — but the Victorian police have since rescinded the citations.

A police spokesman said: “On occasion, errors will be made. However, that is why a review process exists to ensure instances such as these are identified and rectified.” This is the same Victoria police force that cited a man for washing his car — a citation that was also reversed.

Oh, we would never infer that!

Instead — and this is chilling — “Victoria Police is encouraging the public to report those who are doing the wrong thing by calling… or going online.”

He continues: “Can't believe how you just shrugged it off. That's the state’s problem!”

The 5: Is everyone spoilin’ for a fight these days? (We’ll chalk it up to cabin fever.)

Since when did we say states should get a federal bailout? All we said is that McConnell is posturing…

P.S. There’s no easier way to buy and hold real physical metals. With a single click, you can buy and store gold… silver… platinum… and palladium in your choice of six audited vaults worldwide. Follow this link to set up an account.

At the risk of repeating ourselves, Agora Financial purchased a stake in the Hard Assets Alliance, so yes, we’ll get a cut of the fees (again, among the industry’s lowest). But we think it’s one of the best alternatives around for everyday investors to get exposure to real precious metals. So one more time, here’s the link.