Retail investors — pinning their hopes on gold — are paying a hefty surcharge to own the safe-haven metal.

Bloomberg reports: In March, “investors [snapped] up coins sold by the U.S. Mint… at the fastest pace in over three years.” Not only that, but they’re willing to pay a steep premium over gold’s spot price — the highest premium in six years. 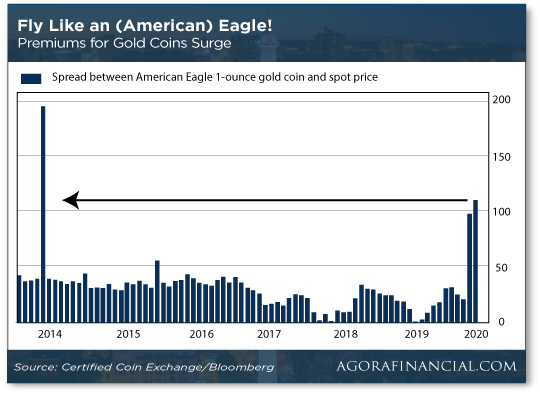 “That premium has jumped to $135,” says Bloomberg, “more than tripling from two months ago.” This as on-edge investors rush into precious metals as the market plays a game of tug of war amid pandemic shutdowns.

All of which has clamped down on “the supply of coins and bars available for shipment around the globe.”

So while retail investors are paying the highest premiums in six years, “in a chaotic couple of days in late March, the premium for New York futures over the London spot price rose above $70 — the highest in four decades” (emphasis ours).

The spread has since come back to Earth — around $21 — but that’s still roughly three times the premium under normal circumstances.

“We’re producing as many kilobars as we can,” says Perth Mint CEO Richard Hayes. “We’re probably churning out 7½ tons of them a week at the moment and we are forward-sold well into May.”

He continues: “This is an unusual situation where you’ve got plenty of physical metal, it’s just in the wrong form and in the wrong place.”

As for gold in the wrong form, over a week ago The 5 discussed the Comex predicament — short on preferred 100-oz. bars and having to settle gold contracts with fractional shares of 400-oz. London bars. “A very large portion of those kilobars are ending up as Comex deliveries,” Mr. Hayes confirms.

All to say, retail investors are getting (pardon the pun) shortchanged: “For every coin we make, be it gold or silver, we could probably sell five or six of them,” says Hayes. “That strong demand will be a little longer-lasting, I expect, as people have been quite badly frightened by this whole COVID-19 disaster.”

[As an aside, it’s been interesting to see gold make headline news of late… not relegated waaay below the fold. And mainstream financial news outlets aren’t the only ones perking up to gold’s possibilities.]

“Bank of America Corp. raised its 18-month gold-price target to $3,000 an ounce — more than 50% above the existing price record,” Bloomberg says.

This according to a rather snarkily titled BOA report: The Fed Can’t Print Gold. (The 5 approves this message… heh.)

“The bank increased its target from $2,000 previously,” Bloomberg says, “as policymakers across the globe unleash vast amounts of fiscal and monetary stimulus to help shore up economies hurt by the coronavirus.”

“Investors will aim for gold.” 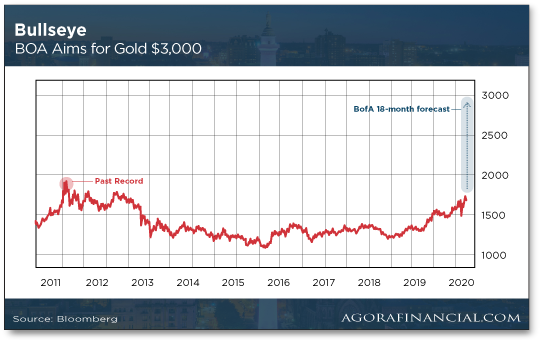 The report concludes: “Beyond traditional gold supply-and-demand fundamentals, financial repression is back on an extraordinary scale.” In other words, gold’s going to shine against the lackluster background of equities, fixed income and the U.S. dollar.

[Editorial note: “Gold is difficult to get now but not impossible,” says Jim Rickards. “If you don’t have yours yet, don’t wait any longer,” he says. “When the next panic hits, there won’t be any available at any price.”

That’s exactly why we’re urging our readers to check out Hard Assets Alliance. With competitive rates that most dealers can’t touch, HAA is a model of liquidity, providing guaranteed settlement for all accounts. And it only takes minutes to set up an account to buy and store gold, silver, platinum and palladium in a secure, private vault.

It bears repeating that Agora Financial purchased a stake in Hard Assets Alliance, so we get a cut of the fees. But we wouldn’t have invested if we weren’t absolutely convinced HAA is one of the best ways we know for investors to get exposure to precious metals. Again, here’s the link.]

The big, ugly economic number today — first-quarter GDP — is a haunting reminder of the Great Recession.

And it’s downright gross — the most extreme contraction, in fact, since the panicky days of 2008. 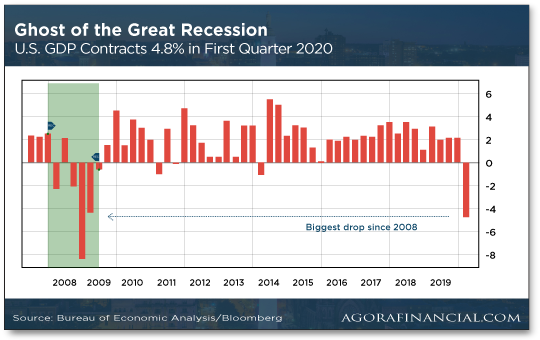 GDP shrank at a 4.8% annualized pace from January through March — far worse than what analysts anticipated at 3.9%

Even more nausea-inducing? We’re just nibbling at the edges of the impact of the coronavirus; those numbers will be baked into second-quarter GDP. Oy.

“While mega-cap tech names have been the glue that held the recovery rally together,” says our analyst Greg Guenthner,“small-cap names were forced to endure one of the worst sell-offs during the March coronavirus panic.”

“Yesterday’s action was telling,” he says. “As the major averages gave up their morning gains, the Russell 2000 small-cap index held firmly in the green. As of Tuesday afternoon, the Russell is now leading the Nasdaq Composite off the March 23 lows.” 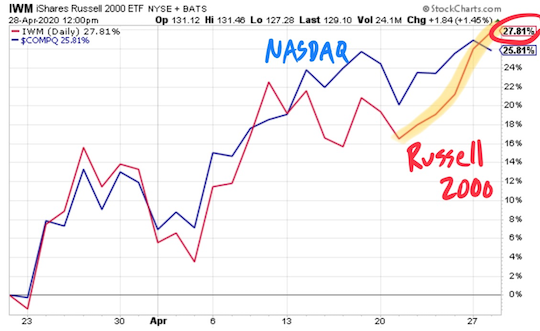 “Even when you factor in yesterday’s morning fade,” says Greg, “the Russell 2000 small-cap index has gained 9% over the past five trading sessions, compared with a gain of just over 4% in the Nasdaq Composite. An impressive move!”

Not that small caps are out of the woods just yet. The iShares Russell 2000 ETF has still shrunk 20% in 2020 compared with the Nasdaq index — down 3% in the same time.

Greg says: “We’ll need to see a sustained recovery before we can sound the ‘all clear’ on a sustainable small-cap rally.”

In fact, equities are flying high, and according to the media, it’s all because American biotech Gilead Sciences (GILD) says its antiviral drug remdesivir shows “encouraging” results for the treatment of severe COVID-19 cases.

[We had to chuckle: Jim Cramer says — with a hyperbolic flourish — that Gilead’s antiviral signals “the beginning of the end of the true nightmare.”

We say slow your roll. But also, from his lips… right?]

And it was in the green (we’ll stop)… 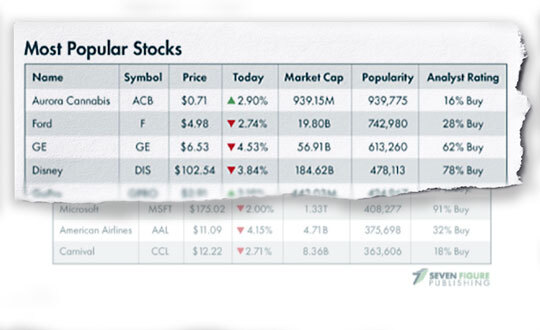 And Ray notes: “As cannabis mainstreams, it ups political pressure at the federal level to act.” No time like the present, right?

“Dealing with the virus has produced disastrous economic effects, and the potential for cannabusiness to help us recover will add urgency to the legalization push.” Simply put, “cannabis means new jobs.

“The U.S. cannabis industry employed almost 250,000 Americans before the crisis hit, almost doubling headcount over the past three years.” Ray says: “Legalized, the cannabis growth industry could help lead the country out of massive unemployment.

“Moreover, with the economy knocked on its back, tax revenues are falling,” Ray says. “You can bet that states will be looking to make up that shortfall somehow.”

Combined, black-market and legal cannabis makes up a $56 billion industry… but only 10% is actually taxed. Irresistible?

There’s a historical precedent for the Feds rolling back vice laws in order to generate tax revenue. “The U.S. ended alcohol prohibition during the Great Depression for similar reasons,” Ray says, “so we might get to witness history repeating itself.”

“So look for cannabis-friendly catalysts in the near future,” Ray says. “We’re living through an extraordinary time — and it’s creating extraordinary opportunities for the U.S. cannabis industry.”

“After reading your piece on the ‘Meat Mystery,’ I can’t help but chime in,” a reader says.

“The reason for the existence of these humongous industrial farming operations and the problems they are having is not a mystery at all; it’s because of greed, plain and simple.

“What needs to be said is this: Once upon a time, there was, say, an egg farmer and he and his egg farmin’ buddies decided to form an association, hire some lobbyists and go to Washington, D.C. After they wined ’n’ dined ’n’ bribed lawmakers, they forced the little-guy egg farmers out of business with stupid and nefarious laws that only Big Business could afford to follow.

“Give it some time… Corporate buyouts, farm foreclosures from the boom-and-bust banking cycles and the conglomerates will grow into bigger and bigger conglomerates. And all we will be left with are these nasty, chemical-laden, unhygienic, low-quality industrial mega-farms run by senseless, thievin’ bean counters. While the rest of the would-be mom and pop farmers are left begging for food stamps and minimum-wage jobs.

“Enjoy The 5 (and no ‘buts’),” writes a longtime reader living in Ecuador. “Thought I might chime in on the food shortage problem.

“We’re in a lockdown, and can only be out from 5 a.m.–2 p.m. I can only drive my car one day per week based on the last digit of my license plate.

“I’ve noticed occasional shortages in my supermarket — maybe one time all of the chickens are sold out. At the beginning [of the pandemic], all of the hand sanitizer was sold out, although now there is plenty of alcohol in giant pallets.

“But just below my apartment there is a small store — a bodega — that has fresh vegetables and some beef, and I see fresh chickens delivered every other morning. So I expect we won’t be short of foodstuffs.

“Oh, I live in a semirural area called La Merced in the southeast corner of Quito.”

The 5: Lockdown, indeed! We can’t help but notice the rather stringent shelter-in-place rules in Ecuador… but it sounds as if food supply chains are holding up.

As for me and my family, we’re taking Dave’s “tend your own garden” words quite literally (well, not super-literally — I’ve got a notorious black thumb). Instead, we’re joining our local community-supported agriculture (CSA) program.

For a weekly fee, we’ll pick up seasonal vegetables and fruit from local farmers who’ll do the growing for us. Meat and dairy are optional, but considering the way things are going in the meatpacking industry, our local farmers might become our local grocers.

Something for our readers to think about…

P.S. “Holy moly, three more winners today!” Dave tells me via instant message — enthusing about The Profit Wire, the trading service he helms along with our floor-trading veteran Alan Knuckman.

Yes, those are all energy names — huge gains despite all the doomy headlines about that sector.

That’s how The Profit Wire works — defying the media’s narratives and riding the coattails of connected market insiders who know the real story.

You can get started booking your own gains like these just days from now — as Dave explains when you click here.