Confession: We didn’t make the most of your 5 Mins. on Friday.

We spent a couple hundred words fumbling through an idea that our colleague Nomi Prins compressed to less than three dozen on Saturday. Note the Washington Post headline at the bottom… 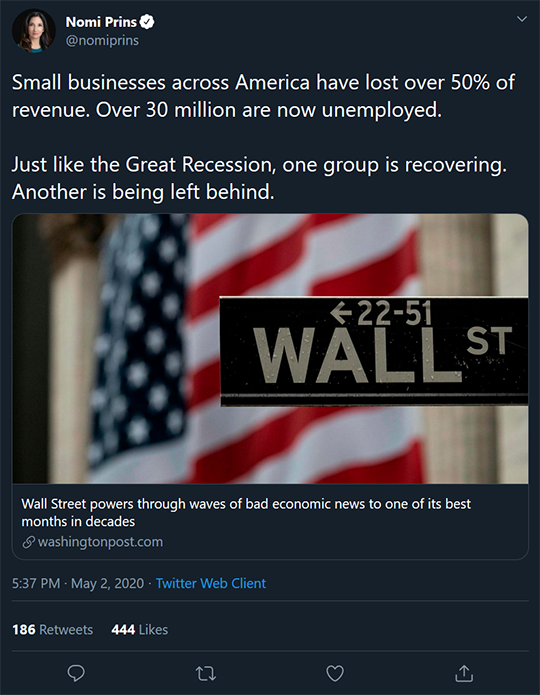 Then again, we recall we did express the same thought in one screengrab from CNBC in mid-April… 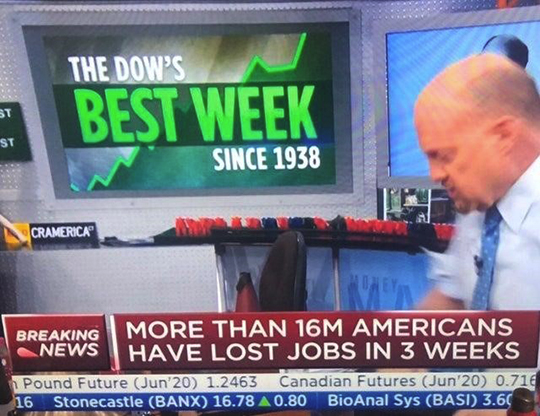 OK, you get the idea. There’s a growing disconnect between Wall Street on the one hand and the real economy on the other — thanks to the Federal Reserve’s massive rescue programs.

“It’s all about what I call ‘dark money,’ or central bank credit created out of thin air that flows into the financial system and props up markets,” Nomi says.

And she knows this phenomenon firsthand, given her extensive background in investment banking.

“It’s the No. 1 factor that drives today’s markets,” she goes on. “It’s basically a form of welfare for Wall Street.

“And the Fed has unleashed a flood of dark money lately, with more to come. At the very least, it’ll hold interest rates near zero for the indefinite future.”

One look at the vertical jump on the right side of the chart and you get the idea. The Fed’s balance sheet zoomed up from $4.31 trillion as of March 11 to $6.66 trillion (hmmm…) at the end of last month. That’s a 55% jump in seven weeks. 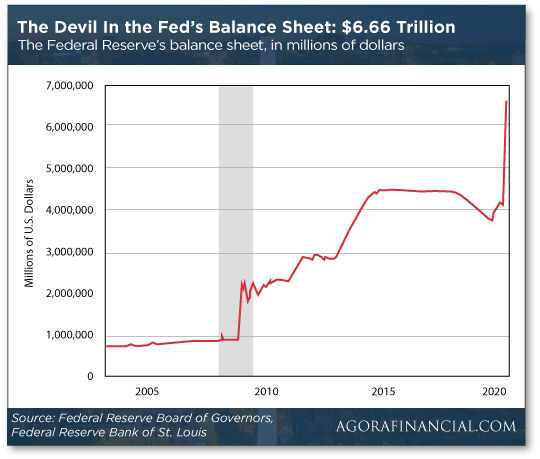 As was the case with the last big jump starting in the Panic of 2008, it’ll be great for Wall Street, not so much for Main Street.

Researchers at Financial Sense Wealth Management recently did some serious number crunching — examining the growth in the Fed’s balance sheet from 2009 onward and how it affected both the stock market and the broader economy.

… but the economy as measured by GDP grew only 46 cents.

Is there any reason to think this time will be any different?

“As usual, savers lose out,” Nomi reminds us. “And this could go on for years.

“After the Fed lowered rates to zero during the last financial crisis in 2008, they didn’t touch them again until December 2015.

“So the Fed has made the decision to placate Wall Street instead of average savers. What a shock.

“If rates stay at zero for the foreseeable future, Americans may have no choice but to venture back into riskier assets for bigger returns. That’s exactly what the Fed wants. That was the rationale behind QE.

“But none of it does anything for the real economy. So the Fed is basically all but guaranteeing that the trends of the past decade will continue, enriching the wealthiest Americans while doing nothing for everyone else.”

It’s maddening, to be sure. But drawing on her vast trading experience, Nomi has developed a way for you to skim some of those Wall Street gains for yourself. And fast. We’re talking about a chance to double your money or better in a single day.

Sound impossible? Judge for yourself. Nomi walks you through how it works when you click here.

All of the foregoing is critical context when Warren Buffett spews his usual pabulum about “Nothing can basically stop America.”

Those were his exact words over the weekend at Berkshire Hathaway’s annual shareholder conference — like everything else these days, a virtual affair.

He even cited the Panic of 2008 as evidence to support his point. But as we’ve just shown, and as you might well know from personal experience, the real economy and financial assets have been two completely different things since then.

Ol’ Warren, of course, made out like a bandit — as we’ve noted on many occasions, including three years ago in our 10th-anniversary episode of The 5.

More telling is the fact that Buffett is surveying the landscape and doesn’t see any companies to buy at a bargain price. And so he’s content to sit on BRK’s huge cash pile.

“We have not done anything, because we don’t see anything that attractive to do. Now that could change very quickly or it may not change.”

Heck, Buffett hasn’t made any good-size acquisitions we can remember since his purchase of Precision Castparts… and that’s nearly five years ago now.

Buffett amassed his fortune in part by acquiring quality, easy-to-understand companies in their early stages of development. Fast-growing, job-creating companies. But how many companies are there like that now?

Stocks are a mixed bag as the new week begins. The Dow is in the red by about three-quarters of a percent… the S&P 500 down about a quarter percent… and the Nasdaq up half a percent.

The airline stocks are taking a big hit after Buffett disclosed over the weekend that Berkshire has dumped all its airline holdings. American, Delta and United are all down 8–9% as we write; Southwest is holding up a little better.

“It looks like cannabis could help cure another major symptom of the COVID-19 pandemic,” says our penny pot stock authority Ray Blanco.

But in this case he’s not talking about cannabis compounds combating the virus itself. “I’m talking about state revenue shortfalls.

“With the economy on ‘pause,’ state and municipal revenue sources are at a standstill. At the same time, states are shelling out substantial resources for everything from coronavirus testing to unemployment benefits. State budgets are experiencing unprecedented stress in many cases.

“Suddenly, in states where cannabis legalization was the furthest thing from the legislative agenda, it’s beginning to look important.

“The evidence is all around: In the first five years since legalization, Colorado made more than $1 billion in taxes, licenses and fees related to marijuana. California hit its first billion dollars in pot tax revenue in less than half that time.

“In large states like New York, analysts estimate that cannabis revenues would clock in at more than $1.3 billion a year,” Ray goes on.

“That number could fill as much as a quarter of the revenue gap New York’s state comptroller is projecting for COVID-19.”

Three short years ago, Gov. Andrew Cuomo was still denouncing marijuana as a “gateway drug.” But by last year, he was jealously eyeing the revenue generated by other states.

Surely as he uses the pandemic to consolidate power — as political consultant Monica Klein says, “He’s high on his new popularity and using it to become even more authoritarian” — he’ll have an easier time pushing legalization through the legislature.

Ray’s bottom line: “Cannabis provides one of the few levers that state governments can pull to open an instant flow of revenue and new jobs at a time when they’re needed most.” Invest accordingly.

Our daily quest for something quirky from the business world at this point of our 5 Mins. is coming up a little short today, except….

We see someone on the business page at Fark.com has captured a slice of life in very few words while linking to a CNBC story: “Kellogg’s Eggo waffle sales soar 45% as consumers eat breakfast at home but don’t know how to actually cook.”

To the mailbag, and more input about the shift in the Drudge Report’s editorial stance — along with some insight into what looks like a new Drudge “partner” website, DNYUZ…

“The ‘About’ link at the bottom of the page is effectively blank,” says a reader who actually managed to click on it. “You can look at the page source and find out that its link’s effect is nothing more than to scroll you to the top of the page.

“And is DNYUZ just ‘De News’ in disguise?

“It’s possible that Drudge is merely trying to get hits, for some unknown reason. The furor that he has raised will attract attention now, sure, but its longer-term effect is undoubtedly downward. Nobody trusts a traitor, certainly not the MSM, nor the conservatives. He will end up relegated to the backwaters of the web, inhabited by the likes of the National Enquirer, except with less credibility.”

“I never paid much attention to Drudge,” writes another, “in part I suppose because you and your Agora colleagues did such a great job of sifting through various sources to come up with always informed and critical takes on the news.

“I’m not sure that I can provide a solution for your dilemma (where can one find reasonably accurate news reporting today), but here is what I do:

“I get a daily news feed in my email from Ozy. This tells me what MSM types think is the important news, with relatively little snarkiness. When Ozy started, they often were quite snarky about Trump, but they seem to have made a decision to try to be more neutral.

“Then I go to tweets of people like Taibbi and Aaron Maté or to blogs like that of Paul Craig Roberts. I love his passion, his extreme emotionalism, which of course does prejudice some of his writings.

“I’m not helping you at all, am I? You already know these people, and their strengths and weaknesses. Ah, well, the point is that I hear you and that I wish I could help.”

The 5: Well, to be clear, the object of our original query was not to find a new source of “reasonably accurate news reporting” — we read wide and far and with a skeptical eye — but rather to get inside our readers’ heads and learn what they’re seeking out these days if they’ve turned away from Drudge.

The beauty of Drudge up until recently was that 1) it was an excellent window into what might be on the minds of our readers, while 2) it was also a pretty good window into the Establishment media’s priorities. One-stop shopping, as it were.

We’re still checking out our readers’ recommendations for a “new Drudge,” but sadly we’re not seeing anything yet that checks both boxes. Folks instead are retreating into their own conservative-populist echo chambers, it seems.

Oh, well. As someone once said, the only constant in life is change, right?

P.S. If the Federal Reserve is determined to prop up Wall Street while letting Main Street go to pot, you have to “follow the money” if you want big and fast gains.

That’s why our ex-Wall Streeter Nomi Prins is helping readers seize on a market anomaly to help them make a ton of cash.

And they’re doing it by exploiting one simple market secret — which Nomi reveals at this link.