It’s probably the least surprising news story of the day… but it commands our attention regardless. 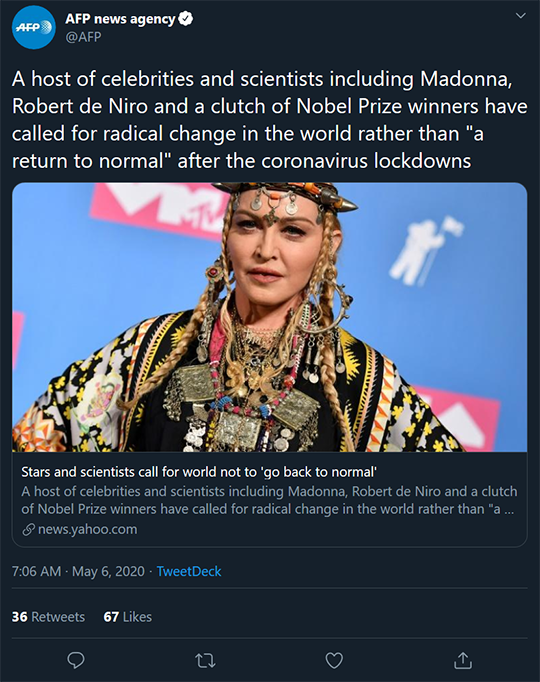 "We believe it is unthinkable to 'go back to normal,'" says a letter in the French daily Le Monde — signed by Madonna and Robert De Niro, among roughly 200 others.

In a post-pandemic world, “Adjustments are not enough,” they declare. “The problem is systemic."

If you detect a climate change agenda at work, you’re right.

"Pollution, climate change and the destruction of our remaining natural zones has brought the world to a breaking point… The pursuit of consumerism and an obsession with productivity have led us to deny the value of life itself: that of plants, that of animals and that of a great number of human beings.”

➢ As it happens: With a large portion of the planet under lockdown, global carbon emissions have already reverted to levels of 10 years ago, according to the International Energy Agency.

Hmmm… We’ll leave it to others to beat the dead horse about the celebs’ own staggering fossil fuel consumption aboard private jets. (Although we’ll return to the theme of elite hypocrisy later in our 5 Mins.)

Rather, we’ll note today that with airlines now offering upcharges for the privilege of having no one next to you in a middle seat, the better for social distancing, it’s not hard to imagine air travel once again becoming a luxury good — as it was before Jimmy Carter began deregulating U.S. airlines 40-odd years ago. We’re sure that’s just how the celebs would like it.

We can also well imagine they’re pleased with the meat shortages we last took up in this space a week and a half ago.

Today we tackle the meat shortage from a different angle. Because it wasn’t inevitable that a pandemic would shut down 40% of U.S. beef and pork processing capacity.

The meat industry itself is to blame — pushing Washington to enact regulations that made the industry far less resilient than it once was.

“The Wholesome Meat Act of 1967 mandates meat must be slaughtered and processed at a federally inspected slaughterhouse, or in a facility inspected in a state with meat inspection laws at least as strict as federal requirements,” writes Michael Maharrey of the Tenth Amendment Center.

“Small slaughterhouses cannot meet the requirements,” Maharrey goes on. “As a result, the meat processing industry went through massive consolidation. Since the passage of the act, the number of slaughterhouses dropped from more than 10,000 to 2,766 in 2019. Today, instead of hundreds of companies processing meat, three corporations control virtually the entire industry.”

And so here we are, 53 years after passage of the law, with a highly concentrated factory-farming industry laid low by… a germ. And no executive order from the White House, like the one issued last week, can overcome that reality.

At least the overcomplex system of meat production and distribution still works, kinda-sorta, as long as there’s refrigeration and a reliable power grid to support it. Oh, wait…

In another recent executive order, the White House cited the “extraordinary threat to national security” posed by foreign-supplied components in the U.S. power grid. The order “asserts federal oversight over private utility purchases of gear from suppliers deemed controlled or influenced by foreign adversaries,” says The Wall Street Journal.

The word “China” appears nowhere in the order, but that’s obviously what it has in mind.

Like the meat order, this one begs the question of how the industry became so concentrated. High concentration means low resilience.

As we noted six years ago, the U.S. power grid is far more interconnected than most of us appreciate. Only three major grids span the country — the Eastern, the Western and the “ERCOT,” or Texas grid. 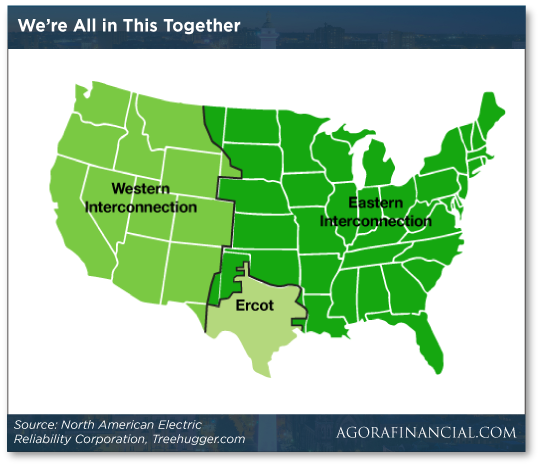 So intertwined is the system that a software bug at an Ohio power plant knocked out electricity to 55 million Americans and Canadians during the Northeast blackout of August 2003.

It didn’t have to be this way. This not-very-resilient system came about during the New Deal.

Throughout the 1920s and early 1930s, “windchargers” dotted the rural American landscape — windmills with battery backup. They supplied electricity to some 800,000 rural homes. You could buy ’em through the Sears, Roebuck catalog. One of the most popular versions, the Jacobs Model 45, cost $830 — complete with battery and 50-foot tower. That’s $15,300 in today’s dollars.

As a 1983 Mother Earth News article recalled, the stiff breezes “helped connect far-flung farmers and ranchers with the outside world as they and their families huddled around crackly-sounding Philco radios, to find reassurance in the ‘fireside chats’ of Franklin Roosevelt and entertainment in the verbal antics of Fred Allen and Jack Benny.” 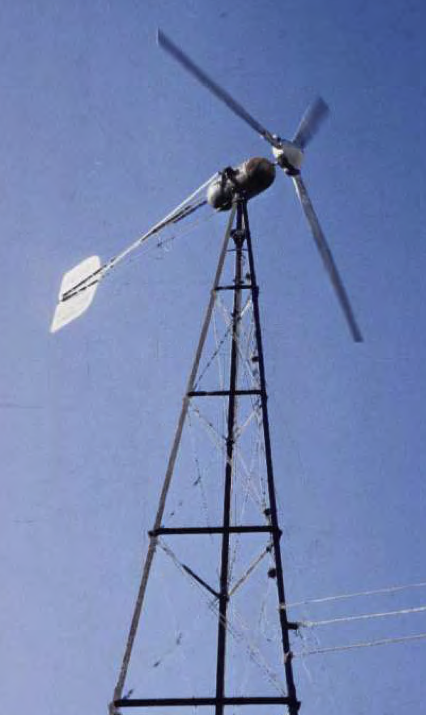 A Jacobs windcharger still in operation in the Texas panhandle in the 1980s
[Photo from smallwindconference.com]

But it was FDR who killed off the windcharger industry — with formation of the Rural Electrification Administration. At staggering cost — up to $2,400 per mile in some areas — lines were built and everyone got connected with everyone else.

Who knows how the grid might look absent that intervention? As Richard Maybury, one of the graybeards of the newsletter biz, mused recently, “Today solar and wind power, and batteries, would be advanced enough for everyone to have electrically self-sufficient homes with solar roof shingles and solar siding.”

Instead, we’ve got what we’ve got. And no executive order can fix that, either…

To the markets, and a familiar story — the Dow and the S&P 500 treading water while the Nasdaq sprints higher.

At last check the Big Board and the S&P are flat… but the Nasdaq is up a solid 1%.

“The big tech stocks are once again in the driver’s seat,” affirms Greg Guenthner of our trading desk. “Facebook, Google and Apple had already posted gains approaching 4% on the week by midday yesterday.

“Meanwhile, investors are also recovering from Amazon’s lackluster Q1 earnings as the stock surged to start the week, consolidating back into its late-April range just below all-time highs.” [Toldja the sell-off Friday was a knee-jerk reaction.] 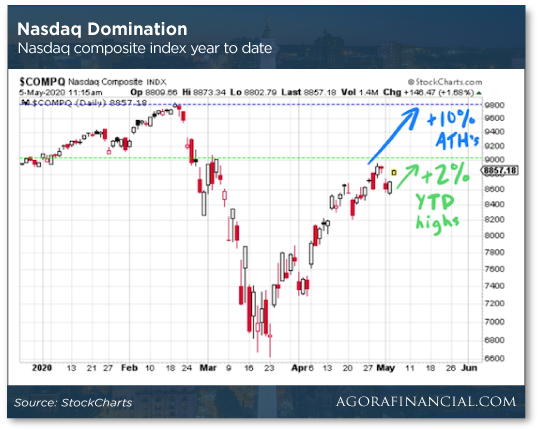 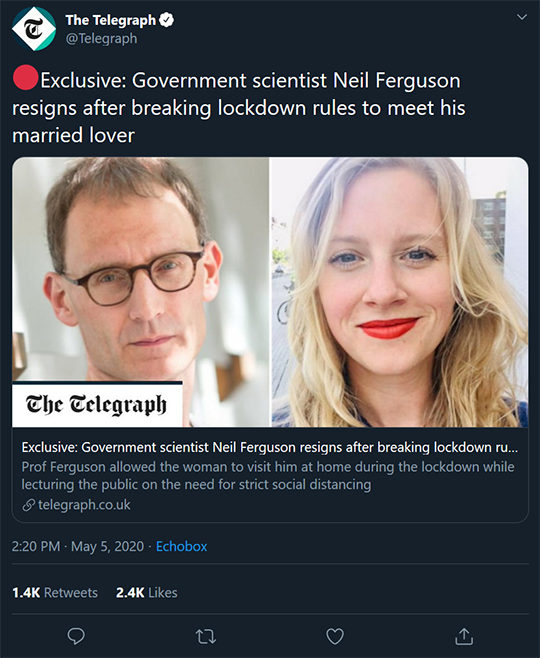 It was the dire predictions of epidemiologist Neil Ferguson from the Imperial College of London that prompted lockdown measures in both the United Kingdom and the United States — dire predictions that haven’t panned out, by the way. Turns out Ferguson once projected up to 200 million deaths worldwide from a 2005 bird flu outbreak, and the actual total was 440.

But yeah… He violated lockdown measures for a booty call.

Bonus points: It turns out his lover, Antonia Staats, works for a U.S.-based nonprofit called Avaaz. “The organization promotes global activism on issues such as climate change,” reports The Sun. Because of course it does.

Ferguson has had to resign his government-advisory position, but Scotland Yard says it will not issue him a fine. Because of course it won’t…

“Americans are the most generous people on Earth, measured by how much time and treasure they devote to charitable causes,” says our resident futurist George Gilder.

Among the many trends Mr. Gilder is tracking — how global lockdowns are changing the nature of charity, and for the better.

Specifically he wonders “whether the virus’s impact on low-wage workers from the neighborhood restaurants, retail outlets, gyms and beauty salons in our own neighborhoods will shift our focus from national, cause-based giving to local community-based helping.

“Suddenly we all know the poor by name,” he goes on: “They have been taking care of us for years. The latest fashions in giving include buying gift cards from local restaurants to help them survive and then donating the cards to local food shelfs. Ordering take-out has become a mark of good citizenship.

“Scholar Arthur Brooks has pointed out that the more deeply people are involved with church-based and other local charities, the more likely they are to be skeptical of the welfare state.

“Wouldn’t it be a wonderful surprise if the lesson Americans took from the pandemic was not ‘We need the government to protect us’ but ‘We can darn well look out for each other’?”

For sure. Which brings us to an effort we’d like to bring to your attention.

Our executive publisher Addison Wiggin — the founder of this e-letter 13 years ago, if you’re a newer reader — figures you’re probably a like-minded soul, “likely to believe voluntary community action is preferable to government decree.”

Which made him extra-impressed when his son, a high-school junior in Baltimore, put together a fundraising effort with a classmate. It was already up and running before Addison knew a thing about it. Initiative.

As son Augie explains, “During this downtime, we are striving to do something positive and make a difference, however small. Teaming up with Teespring and GEDCO’s Cares, a local food bank serving those in dire need, we created this line of ’Rona Relief T-shirts.” 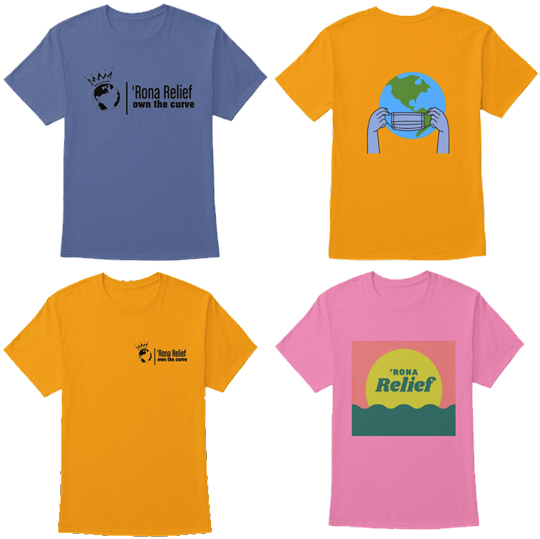 Obviously, there’s a nice selection of sizes and colors. “You can find T-shirts, sweatshirts, tote bags, coffee mugs and more at our ‘Rona Relief store,” Augie tells us. “Help those most in need during the quarantine, here — 100% of proceeds go to feed the hungry in the Baltimore community.”

God knows there’s a lot of them. Baltimore might exist on the fringes of “the DMV” — the wealthy enclaves of the District of Columbia, Maryland and Virginia, fattened by the relentless growth of the federal government — but during this crisis a lot of people there don’t have the luxury of working from home and ordering endless delivery like the scads of federal employees and contractors…

P.S. Meanwhile, your editor sometimes keeps a police scanner on during the workday, alert to the happenings in my small-town Midwestern surroundings.

A couple of weeks ago, in an instance of the growing snitch culture surrounding the pandemic, someone called the authorities to report a large number of cars congregating near a local ice rink.

Replied the officer, already hip to what was going on, “They’re picking up food.”

That was surely the kick-start my wife and I needed to give to a local food bank.

If you’re in a position to do likewise — and if you’re reading this, we’re guessing that’s the case — there’s no time like the present. Or if you want a cool T-shirt and help some needy folks in Baltimore, check out the ‘Rona Relief store — where 100% of the proceeds will help feed the hungry.