“The U.S. labor market is in the worst position since the Great Depression and is unlikely to improve sustainably anytime soon,” says Ronald Temple of Lazard Asset Management.

To wit, we take a look at the most recent (awful, no-good) data from the Department of Labor that show 3 million Americans filed for first-time unemployment benefits last week… 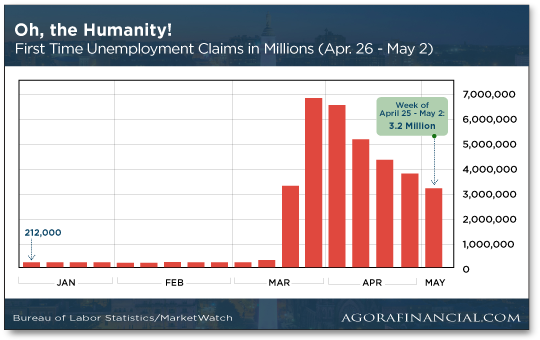 All told, the number of unemployment applicants since U.S. shutdowns started seven weeks ago has topped 33.5 million.

Is there a silver lining here? “New claims, while still multiples of historic averages, dipped for the fifth consecutive week, showing some stabilization from shocking peaks in early April,” reports the Financial Times.

According to Jim Rickards: “The best evidence indicates that the economy will not recover quickly, and an age of low output, high unemployment and deflation is upon us.

“The first reason the economic downturn will persist is the lost income for individuals,” he says.

“Unemployment compensation and PPP loans will only scratch the surface of total lost income from layoffs, pay cuts, reduced hours, business failures and individuals who are not only unemployed but drop out of the workforce entirely.” To say nothing of lost tips, bonuses and commissions…

“Once the government aid is distributed, many recipients will not spend it (as hoped) but will save it,” he says. “Even if you are not laid off, you may worry that your job is still in jeopardy. Any income you receive will either go to pay bills or into savings ‘just in case.’

“At a time when the economy needs consumption,” Jim says, “we will not get it.”

And what’s there to spend money on anyway? More toilet paper?

“Even if individuals were inclined to spend,” he continues, “there are fewer things to spend money on. Shows and sporting events are called off. Restaurants and movie theaters are closed.

“Travel is almost nonexistent, and no one wants to hop on a cruise ship or visit a resort until they can be assured that the risk of COVID-19 is greatly reduced.

“Global supply chains have been seriously disrupted due to shutdowns and transportation bottlenecks… Social distancing will slow production even at those facilities that are open and can get needed inputs.”

And Jim reminds: “One case of COVID-19 in a factory can cause the entire factory to be shut down for a two-week quarantine period. Companies that depend on the output of that factory to manufacture their own products will also be shut down.”

All to say: “We are in a doom loop where individuals don’t want to spend and even if they did, there’s little to spend money on,” Jim says.

“The economy will fall into a ‘liquidity trap’ where saving leads to deflation, which increases the value of cash, which leads to more saving,” he says. “This pattern was last seen in the Great Depression… and will soon be prevalent again.

[Ed. note: A real silver lining? Jim explains five actionable steps you can take to protect your family against the Great Depression of 2020. “If you follow these steps,” he says, “I’m confident you’ll have the best chance at escaping unscathed from this unprecedented crisis.”

And Jim should know; he’s predicted financial meltdowns before — including the Panic of 2008.

Bonus: “I’ll even tell where I already invested $1 million of my own money,” Jim says.

So to secure your financial future — and a comfortable retirement — you owe it to yourself to check out Jim’s video today.]

“Strong earnings from some high-profile growth names like Peloton also can’t hurt,” he says. (We guess we know how some people have been spending their time under quarantine… stationary-biking away. We see you, Type A’s.)

And the market’s apparently shrugging off the ugly unemployment numbers we shared at the top of today’s episode. And the Nasdaq’s leading the way; the tech-heavy index is up 1% — above 9,000 now — actually in positive territory for the year.

We hate to be a buzzkill, but…

Ready for your outrage of the day? A federal bailout of the airline industry has already backfired.

According to Reason: “The CARES Act overall included $50 billion in support, split evenly between loans and grants, for passenger airlines.

“A condition of accepting this federal support — and indeed the stated purpose of this support — was that the airlines retain staff at the same pay rates.”

The loophole? “The quickly passed law… does not specify anything about minimum hours or income,” Reason says, “allowing airlines to cut hours while still ostensibly complying with the letter of the law…

“On Friday, news broke that United Airlines would be cutting 15,000 airport staff and baggage handlers' hours from 40 to 30 a week, converting them from full- to part-time status.” This despite United receiving $5 billion from the federal government… and, in fact, appealing for more.

United isn’t the only one breaking bad; Delta and JetBlue — also recipients of CARES cash — cut employee hours too.

In the meantime, union reps and members of Congress are aghast that C-suite execs would use bailout money to protect the company and not employees.

Michael Klemm and David Supplee, representing the International Association of Machinists and Aerospace Workers, said in a letter to Delta and JetBlue: “Opportunist corporate actors… are using that good faith support of airline workers around the country… to screw your own workforces and greedily undermine the intent of the federal stimulus funds that you demanded."

Sen. Josh Hawley (Missouri) has even called on United to refund Uncle Sam… but perhaps he and every member of Congress who voted for the stimulus package should have taken a deep breath and crafted a more thoughtful package?

“They didn't,” Reason says, “and airlines are now taking advantage of a loophole in the law. Both lawmakers and airline companies are culpable.”

[This just in: We learn United Airlines is slowly… backing… away from its decision to cut the hours of 15,000 employees. Well, kinda…

After the union filed a lawsuit Tuesday, United is now asking for volunteers to work 30 rather 40 hours per week. According to the Chicago Tribune: “Full-time employees who volunteer would retain their status as full-time, allowing them to continue accruing benefits as if they were still working 40 hours per week.”

But in a memo to United employees, COO Greg Hart did a little arm-twisting: “Without a high level of participation, we will have no choice but to reconsider a mandatory reduction to 30 hours for our full-time employees.”

Question: Is Mr. Hart volunteering for a pay cut?]

Ready for your second outrage of the day? The TSA continues to hoard 1.3 million N95 masks.

This despite coming and going at airports has trickled to just 5% of typical traffic and many TSA agents have been ordered to stay home.

“Meanwhile, other federal agencies, including the Department of Veterans Affairs’ vast network of hospitals, scrounged for the personal protective equipment that doctors and nurses are dying without,” ProPublica reports.

And TSA lawyer Charles Kielkopf blew the whistle on the agency after he suggested in early April the TSA share its mask stockpile with hospitals desperate for equipment.

“We need to reserve medical masks for health care workers,” Kielkopf said, “not TSA workers who are behind an X-ray machine.”

The TSA dissembled… even as the few TSA agents still working in airports prefer to wear regular surgical masks over the hospital-grade masks that were left over from the last pandemic. (Remember the swine flu of 2009? Neither do we.)

As of May 1, the agency has continued to ignore Mr. Kielkopf’s recommendations. “Most of our people aren’t even working,” he says. “That doesn’t make any sense.”

“Just a few closures of meatpacking plants are putting the entire meat industry on the brink of collapse,” says an article at Townhall.

Of course, if you’ve been following Dave’s treatment of the pandemic-stressed meat industry — including Wednesday’s episode — this comes as no surprise.

While The 5’s thrown light on an industry that’s dominated by three mega corporations, today we outline a remedy for the current stranglehold on the meat supply.

One piece of legislation called the PRIME Act (get this: Processing Revival and Intrastate Meat Exemption Act) was sponsored by U.S. Rep. Thomas Massie (Kentucky) and has languished for almost a year in the House and Senate.

According to Townhall: “It could be fast-tracked to President Donald Trump if the political will is there.”

Here’s the proposal: “The legislation lifts restrictions on over 1,000 mom and pop meat processing plants that aren’t allowed to supply restaurants, schools, hotels and the like.”

Rep. Massie — who raises cattle himself — has been clamoring to undo regulations that give an unfair advantage to companies with deep pockets while stamping out competition from smaller outfits. But it wasn’t until Tyson Foods warned the president that the supply chain was “breaking” that anyone took serious notice.

As for food safety, “the small meat processing businesses that the PRIME Act would free up to work for the American people are already subjected to unannounced USDA inspections, so there’s no need to lower standards.”

And the intrastate in the PRIME Act? A measure of autonomy would be returned to states, allowing the sale and distribution of small-farm-raised meat across state lines.

Rep. Massie says: “Let those small meat processors fill in the gaps so that we don’t have the dangerous situation where we’re euthanizing animals instead of providing them as food.”

Would that common sense prevail… but we are talking about D.C. here.

Something 10 times worse than what happened in 2008.

Here’s how to prepare: Take these five steps to protect your family and your wealth from this looming catastrophe.