Two-thirds of New Yorkers hospitalized for coronavirus were… admitted from their homes.

“The curious conclusion,” the Post reports, “was reached in a three-day survey of patients hospitalized with the bug conducted this week…

“Despite the twist, Cuomo doubled down on his calls for social distancing.”

When you’ve dug yourself into a hole, keep digging, right?

And no hole is deeper right now than the U.S. job market.

Here’s what it looks like on the chart from Calculated Risk, depicting the job losses from every recession since World War II. You thought 2007 and beyond was bad? 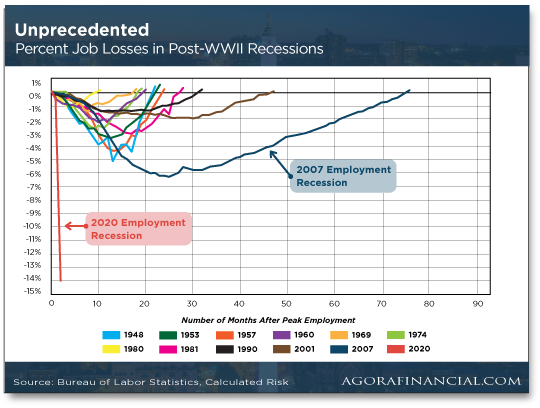 Wanna bet the scale on that chart will have to be adjusted downward when the May numbers come out? The April survey was taken midmonth. It doesn’t account for the millions who’ve filed unemployment claims during the last two weeks.

Don’t expect a “V-shaped” recovery in that red line, either. “It’s going to take years or longer to get back to where we are, or where we were,” JPMorgan Chase chief investment officer Bob Michele tells Bloomberg TV.

The recovery from 2007 took 6 and a half years — which at the time felt like forever.

Meanwhile, the official “U-3” unemployment rate is now 14.7%, a post-World War II high. And that doesn’t tell the whole story by a long shot.

There’s also the U-6 unemployment rate. It accounts for part-timers who’d like full-time work and folks who’ve given up looking for work within the past year. That number is 22.8%.

And then there’s the real-world unemployment rate from Shadow Government Statistics — where economist John Williams uses the same raw data as the feds, but he runs the numbers the same way the feds did 40 years ago before they started fiddling with the figures to make them look better.

At the risk of oversimplifying, he takes that U-6 number and adds all the people who gave up looking for work, no matter how long ago. And there were a ton of such folks who departed the labor force after the last recession, never to return.

By his reckoning, the unemployment rate is 35.7%.

Nor does it end there, per economists at the Federal Reserve Bank of Chicago. As Reuters sums up their research, even a measure like U-6 “may miss those who are on unpaid leave and expect to return to their jobs once the crisis has passed, or people who are not searching for jobs because of stay-at-home orders.”

Meanwhile, we have statistical reinforcement this morning of the “doom loop” Jim Rickards described here yesterday.

A quick refresher: “Even if you are not laid off,” he said, “you may worry that your job is still in jeopardy. Any income you receive will either go to pay bills or into savings ‘just in case’… The economy will fall into a ‘liquidity trap’ where saving leads to deflation, which increases the value of cash, which leads to more saving” — a pattern last seen in the Great Depression.

After we went to virtual press yesterday, the Federal Reserve issued its monthly report on consumer credit. The “expert consensus” among dozens of economists polled by Econoday was for growth of $15 billion. Instead, the number fell $12.1 billion.

That’s because Americans were paying down their credit cards en masse — to the tune of $28.2 billion, a one-month record.

The numbers line up with surveys we cited last week about how well over 20% of Americans are using their $1,200 relief checks to pay down debt… and even more are using them to bolster savings.

Little wonder, Jim says, “We are in a doom loop where individuals don’t want to spend and even if they did, there’s little to spend money on.” Travel? Concerts? Sports events?

“We’re in a depression. The depression is here,” Jim says in an interview with our executive publisher Addison Wiggin, released this morning to our Platinum Reserve members.

“Maybe individual lifestyles haven't changed that much other than the fact that people are at home or sheltering in place. But call your friends, call your family, call your neighbors, you won't make very many calls before you find someone who's been fired, someone who'd been laid off, a restaurant that's closed, dry cleaners, bars, nail salons, hair stylists, painters, plumbers, etc. They're all closed. Maybe if you have a busted pipe, the plumber can come and fix it at your house, but his store is closed, etc.

“So it's not a question of ‘Is the depression coming?’ We're in it… The only question is how long?”

And what you can do about it now that all hell’s broken loose. Jim furnishes answers when you click here.

In the wake of staggering job losses however you measure them, the stock market is rallying today. Because of course it is.

At last check the major U.S. indexes are all up at least 1%. The Dow has vaulted back above 24,000. The Nasdaq, dominated by the tech names, is now in the green for the year.

“Investors bet the worst has passed,” is CNBC’s take. Our take is more like, “Fed rescue programs have disconnected the stock market from the real economy, possibly forever.”

Gold is holding onto its gains from yesterday at $1,718.

For the record: Nine states have now been approved for federal loans so they can keep paying unemployment claims.

They include five of the biggest states — California, New York, Texas, Illinois, Ohio — along with Connecticut, Hawaii, Massachusetts and West Virginia. 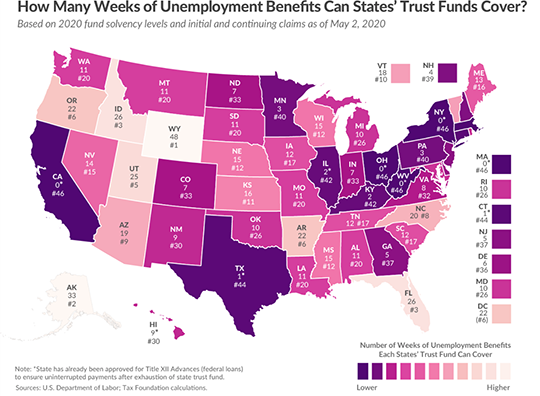 And the number beneath each state abbreviation represents the number of weeks remaining before its unemployment-insurance trust fund is exhausted.

Looks as if Kentucky’s next on the rescue list — unless its senior senator, Majority Leader Mitch McConnell, recommends a bankruptcy filing instead.

With oil languishing at $24 a barrel this morning, the White House has decided — for the moment — that bolstering the oil industry is more important than antagonizing Iran.

From The Associated Press: “The U.S. is pulling two Patriot missile batteries and some fighter aircraft out of Saudi Arabia, an American official said Thursday, amid tensions between the kingdom and the Trump administration over oil production.”

It appears the Trump administration has decided the House of Saud isn’t doing enough to cut oil production, the better to prop up prices and (maybe) keep U.S. shale producers afloat.

The buildup of forces in Saudi Arabia began barely three months ago “to counter threats from Iran,” the AP reminds us.

Scaling it back will give Saudi Arabia and Iran an incentive to work out their differences throughout the Middle East — as they were doing before the buildup began.

So this latest move is a win-win all around — well, except for the Iran-obsessed Republican donors Donald Trump needs to retain GOP control of the Senate this fall.

So Shelley Luther is free again, the state of Texas realizing it came *this* close to losing the consent of the governed. 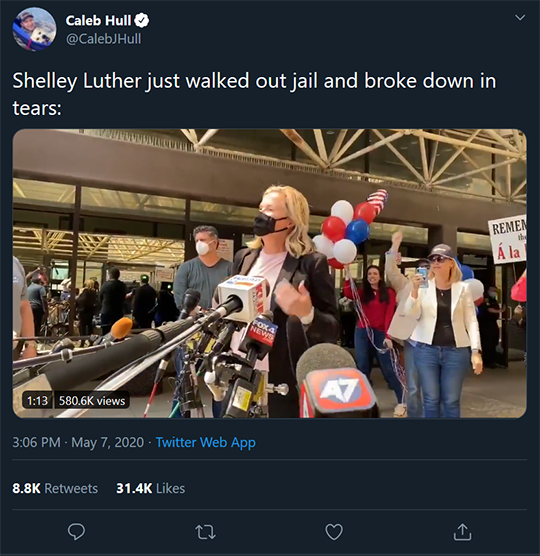 As perhaps you’re aware, Ms. Luther is the owner of a salon in Dallas that remained open in defiance of the state’s stay-home order and a cease-and-desist letter from the county. She remained defiant during a court date on Tuesday: “Feeding my kids is not selfish,” she said. “I am not going to shut down the salon.”

The judge gave her seven days in jail. Again, that was Tuesday. Yesterday, Gov. Greg Abbott amended his executive order, specifying that violators should not be punished with jail.

"Throwing Texans in jail who have had their businesses shut down through no fault of their own is nonsensical,” he said, “and I will not allow it to happen."

OK, fine. But the case still sets an alarming precedent: The judge told Luther she could avoid jail time if she admitted she was “wrong” and “selfish” for doing what she did.

You don’t even have to think Ms. Luther is in the right to be struck by the judge’s demand that she perform an act of self-criticism akin to Stalinist Russia or Maoist China. (Look up “struggle session” sometime on Wikipedia.)

Gloom notwithstanding, we still try to leave you today with something on the offbeat side — to wit, properly priced airplane snacks. 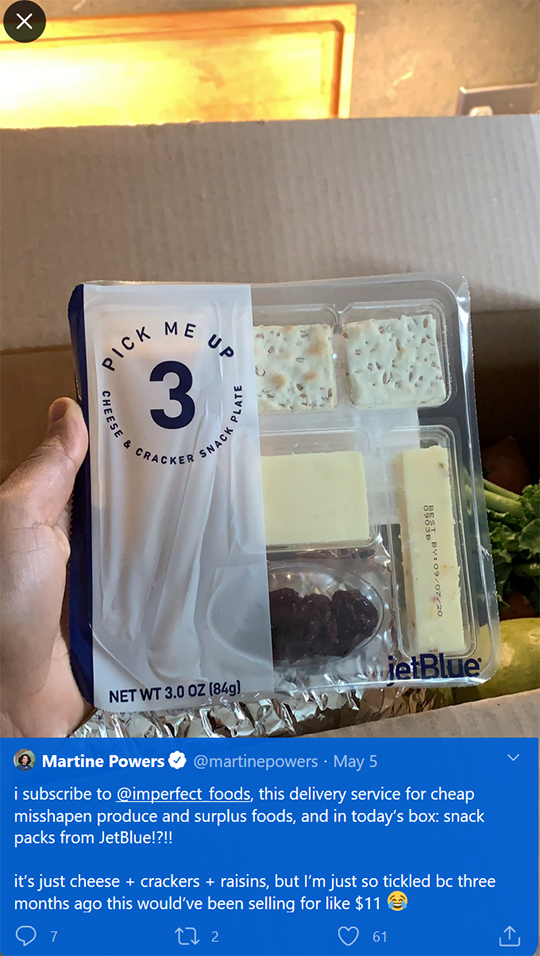 Imperfect Foods is, per The Washington Post, “an online surplus-stock grocery delivery company operating in the West Coast, the Midwest and the Northeast aimed at eliminating food waste.”

For the low, low price of $2.99 you get three ounces of mixed cheeses, dried cherries and crackers that JetBlue had no use for. “This was one of our first COVID-19 food waste recovery opportunities,” says Imperfect Foods CEO Philip Behn. “We could only take a fraction of what they had.”

As the Post elaborates, “He says there are hundreds of clients eager to find buyers for millions of pounds of food originally slated for restaurant, hotel or travel and leisure businesses. But frequently these foods are not desirable or packaged for retail consumers.”

No lie. Last month, for the first time, a supplier called Restaurant Depot opened its doors to the general public. If you ever need a whole goat carcass, that’s where to go.

Seriously. But maybe we’ll leave that angle of the story till next week…

The Society for Human Resource Management says more than half of the 375 firms it surveyed expect they’ll be gone in another six months.

Can anyone deny it’s a depression now?

You owe it to yourself to watch this comprehensive briefing from Jim Rickards, right now.