“They’re Not Coming Back”

Wait, wait — we were told manufacturing was coming home in a post-pandemic world.

You know, we’re supposed to be less reliant on fragile global supply chains and all that?

Well, not for Lenox Corp., maker of fine china. The firm is closing its last U.S. factory in North Carolina and cashiering 159 employees. With retail stores closed, demand has dried up.

Once demand returns, Lenox will rely on contract manufacturers overseas.

Lenox is among a handful of companies mentioned in a front-page Wall Street Journal story today about how many of the “temporary” layoffs in manufacturing are quickly becoming permanent — as factories close for good.

That story lines up with the results of recent Federal Reserve surveys suggesting 24.9% of all job losses amid the corona-crash will be permanent.

Translation: A lot of people who’ve been booted out of the labor force these last two months won’t ever return.

And they won’t show up in the official unemployment figures.

“But if you drop out of the labor force, you say, well, good time to retire. I'm now retired. Or I'm going to sit on the couch and eat Doritos and watch, I don't even know, Japanese baseball, maybe. You're not counted as unemployed because you're not looking for a job.”

Bottom line: “A lot of people are dropping out of the labor force. They're not coming back.”

Sounds like a depression? Jim says that’s exactly what it is.

You can watch the full interview with Jim right now. We released it on Friday for our elite Platinum Reserve members; now it’s available to all of our readers. Watch and you’ll learn… 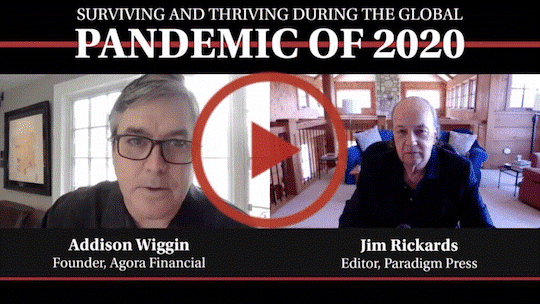 It’s free to watch — no obligation. Once more, here’s the link.

To the markets, where once again the Nasdaq is leading the way — up three-quarters of a percent as we write to 9,188. It’s only 6.4% below the all-time highs notched on Feb. 19.

The S&P 500 is ever-so-slightly in the green, while the Dow has slipped nearly a quarter-percent.

Biotech is outperforming the broad market — just as our Ray Blanco said it would.

“While the overall market is still down from all-time highs, the Nasdaq Biotech Index (NBI) is trading at levels we haven’t seen for five years,” Ray says. “Not only has it recovered from where it was pre-COVID-19, it’s knocking at the door to setting all-time highs. 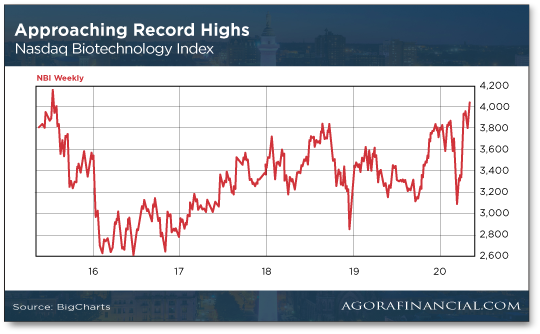 “Some of this outperformance is driven because health care is a defensive sector,” he explains. “We might be willing to give up many things in the middle of an economic crisis, but lifesaving care isn’t one of them. That includes lifesaving new drugs.

“Another piece of the puzzle is that this crisis is, at its root, a health care crisis. It’s caused by a virus. The one industry with the tools to fight is in the biopharma and medical device space. Owning this group right now amounts to owning steel and defense stocks in the middle of WWII.” Even better, Ray says, if you pay heed to a major announcement due tomorrow.

Last Thursday, the trade in futures tied to the fed funds rate began pointing to negative rates before year-end.

Clearly the Fed is keen to squelch the notion, based on this article. “Fed leaders see negative rates as a very last resort — and a remote one, still — worrying they would have harmful effects on financial markets and the banking industry.”

The experience of negative rates in Japan and Europe is that they don’t work. But if central bankers don’t know what else to do, they’ll resort to negative rates anyway.

That’s what the aforementioned Jim Rickards learned last summer during a confab of central bankers and other global elites at Bretton Woods, New Hampshire. We’ve mentioned it a couple of times since. Both a current and a former Fed official said as much.

“It was not regarded as controversial by the panelists,” Jim said, “even though it was completely unprecedented in the history of U.S. monetary policy.”

By the way, Jim addresses the prospect of negative rates in detail, and what you can do about them, during his discussion with Addison Wiggin. Again, you can watch the whole thing here.

Whatever the shape of the next “stimulus” bill in Washington, it’s likely to include a bailout for… lobbying firms.

To look at most media reports, Republicans and Democrats are at loggerheads over what the next multitrillion-dollar bill should look like. Republicans want to make sure businesses are shielded from pandemic-related lawsuits. Democrats want to bail out state budgets. We shall see.

Meanwhile, get this, courtesy of reporter Lee Fang at The Intercept: “Many of the largest lobbying forces are organized under the 501(c)(6) section of the tax code as trade groups. Corporations with similar concerns pool their money together to fund trade groups, which in turn employ thousands of lobbyists to shape elections and legislation on a daily basis.”

At this time, those trade groups are not eligible for support from the Paycheck Protection Program, intended to support companies with fewer than 500 employees. The lobbyists hope to change that, according to a letter from the American Society of Association Executives — which, as you might divine from the name, is the trade group for trade groups.

According to David Dayen at The American Prospect, House Speaker Nancy Pelosi is all on board with this notion. And she’ll almost surely get her way: “Pelosi has run the House of Representatives by fiat for close to two months, and there hasn’t been a single word of protest as she locks every other member of the Democratic caucus out of policymaking and hands them take-it-or-leave-it legislation to rubber stamp.”

On the World War III watch, we see that Indian and Chinese soldiers are not observing social distancing during a border skirmish.

At an elevation of 16,400 feet, soldiers got into a fistfight over the weekend. “Local commanders spoke and resolved the dispute,” the BBC reports with its usual reserve.

We joke… but only in a whistling-past-the-graveyard way. India and China fought a border war in 1962; China was defeated soundly and hasn’t forgotten. Both have acquired nukes in the decades since.

In his book War at the Top of the World, the veteran foreign correspondent Eric Margolis wrote of a 1983 meeting with Chinese military brass in Beijing: "The Chinese security officials told me that they anticipated a military clash with India in the Himalayas or Karakorams early in the 21st century.”

Straw in the wind, Part 1: Germany’s equivalent of the dollar store is jacking up its prices… 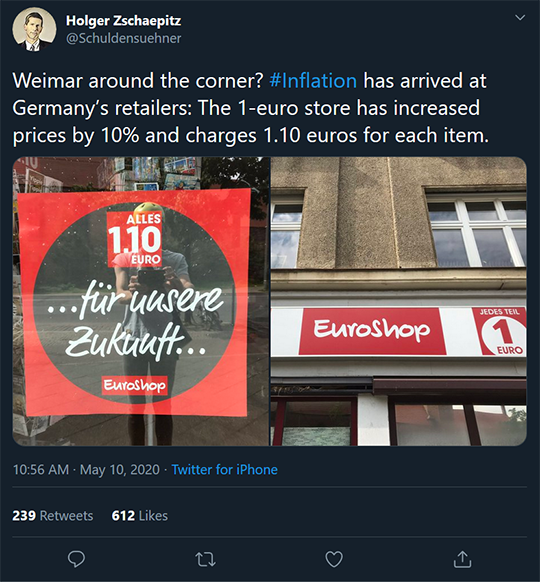 Yup, the 1-euro store is now the 1.10-euro store. (A euro, by the way, is worth $1.08 at today’s exchange rates.) We assume critical staples, especially foodstuffs, are in short supply there as they are here. Evidently shrinking package sizes won’t cut it anymore.

Makes you wonder how long Dollar Tree — the dollar store whose merchandise actually is all $1 or less — can hold out.

Straw in the wind, Part 2: “Saudi Arabia is tripling its value added tax (VAT) as part of austerity measures to support its coronavirus-hit economy,” reports the BBC.

It was only two years ago the kingdom introduced a VAT — part of a plan to wean the government off its dependence on oil revenue. The tax will rise from 5% to 15% as of July 1.

Reminder: The United States is the only developed country that doesn’t have a VAT — a type of sales tax that’s applied at various steps along the production and distribution chain.

And the national debt now tops $25 trillion, on the way to perhaps $26.6 trillion by the end of the fiscal year in September. Just sayin’…

It took 19 years… but one of the 21st century’s monuments to consumerist excess is no more.

Back in 2001 the comedian Lewis Black was in Houston… and noticed a few steps away from the club where he was performing, there was a Starbucks nearby. Not unusual, except for the presence of another Starbucks across the street.

“And that, my friends,” he declared in a famous routine, “is the end of the universe.” 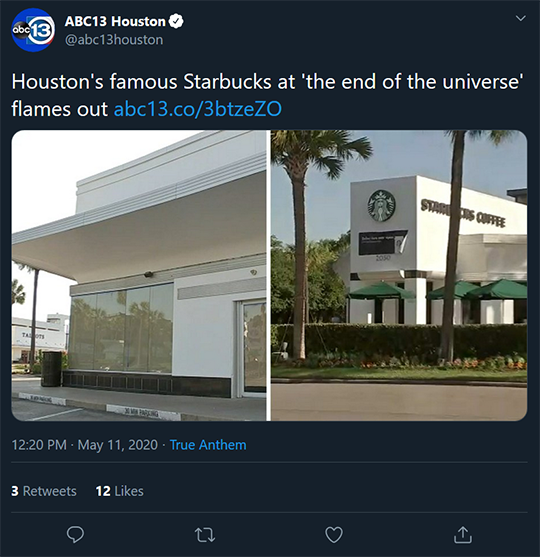 The closing came on March 20; turns out the decision from corporate came pre-pandemic.

But because of the pandemic, no one really noticed until now that the Starbucks at 2029 W. Gray was gone. “Workers at nearby retail stores, who initially thought the shop was closed because of government orders disallowing anyone from entering the coffee shop, were caught by surprise,” says the Houston Chronicle. “There were no signs of the shops closing before [last] week.”

Fear not, however: The other location at 2050 W. Gray remains open for drive-thru service.

And… and… there’s still another Starbucks inside a Barnes & Noble at 2030 W. Gray.

“People are afraid!” reads the subject line of an email from a reader in Idaho.

“Our local TV station aired a survey showing that about two-thirds of the people who responded were either ‘very’ or ‘somewhat’ uncomfortable with opening up. Given the incessant one-sided media hype and their wild-guess models, that is not a surprise. But notice that they did not ask, ‘Are you afraid to go out?’ ‘Will you go out?’ Instead they asked if people are ‘comfortable.’

“God forbid that anyone is ever uncomfortable! And we should lock everyone in and shut down the economy because they are? Violate our inalienable constitutional rights in the process? Are they uncomfortable driving in traffic? Or going to the dentist?

“It’s high time to be skeptical about the motives of the media and the politicians who continue to move the goalposts, who not only present just one side of an argument but also ridicule and censor any perspectives or opinion that challenges their narrative.”

The 5: Moving the goalposts, indeed. When precisely did we shift from “must prevent the hospitals from being overwhelmed” to “must wait out development of a vaccine”?

P.S. Another snapshot of the New Depression: “I'm on the board of a commercial real estate lending company,” says our Jim Rickards, “so I see a lot of statistics on who's paying the rent, and the answer is not many.”

J. Crew is in bankruptcy. So is Neiman Marcus. JCPenney won’t be far behind. “So no one's paying the rent. Commercial's down 90%, retail's down 50%. A lot of individual apartment owners are just… renters are just not paying the rent, and owners can't evict them because the courts are closed. The whole system is falling apart.”

What can you do now that the New Depression is already underway? You might be surprised to learn how much is still within your power. Watch Jim’s interview with our executive publisher Addison Wiggin right here. It’s an eye-opener.