For the moment, jackbooted government thugs have not descended upon Tesla Inc.’s car factory in Fremont, California.

As perhaps you’re aware, Tesla founder Elon Musk is standing up against the lockdown. He made it clear late yesterday… 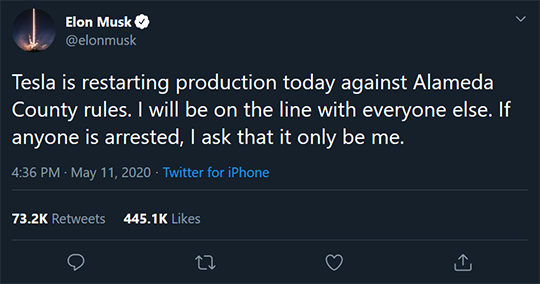 It’s a ballsy stance, for sure — one that requires tenacity, vigilance, a steady hand. 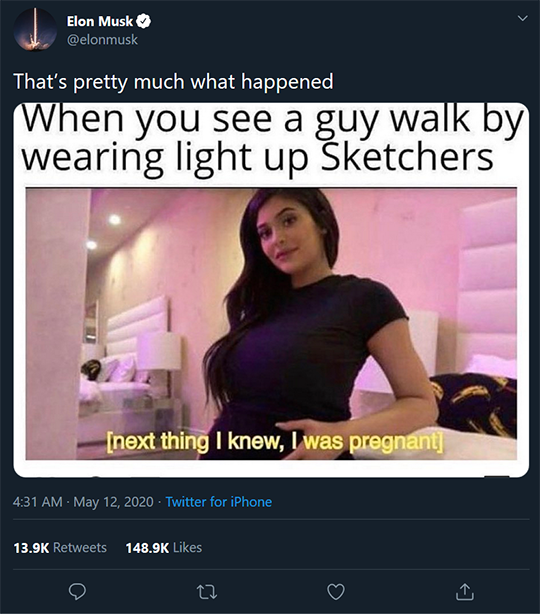 Not that it’s business as usual, we hasten to add. A Bay Area TV station heard from one employee who said her temperature got checked before she boarded the company shuttle bus, and again before entering the factory.

On the other side of the country, commissioners in six Pennsylvania counties are defying Gov. Tom Wolf’s complicated criteria for reopening.

One of those counties happens to be where the state capital Harrisburg is located.

In contrast with the governor, “I have more faith in the citizens of Pennsylvania and the residents of Dauphin County in doing the right thing,” says commissioner Jeff Haste. “I truly believe, if given the opportunity, businesses and citizens and residents will do the right thing, will follow the CDC (Centers for Disease Control) guidelines and will let the rest of the business go.”

The governor lashed out in response, threatening to cut off federal relief money. “Noncompliant counties won’t be eligible for federal stimulus discretionary funds,” he declared.

Will his threat bring the counties to heel? Or will it only embolden the opposition? To be continued…

Data analyzed by FiveThirtyEight demonstrates Americans were largely staying at home before their governors began issuing lockdown orders. Anecdotally, your editor can verify this; traffic on the main drag in my small Michigan town was a fraction of normal several days before Gov. Gretchen Whitmer’s stay-home order took effect.

“That compliance is now fraying in many places,” Boehm continues. “And that’s why governments cannot fully control the economic reopening. It’s not a few dozen protesters who will end the quarantines; it’s the millions of other people who have simply started going about their lives again.”

Perhaps — and admittedly, we’re conjecturing here — that’s the reason small-business America isn’t nearly as despondent as you might expect.

The National Federation of Independent Business is out this morning with its monthly Optimism Index. On the one hand, the index is in collapse. On the other hand, its present level is no worse than it was in 2013… 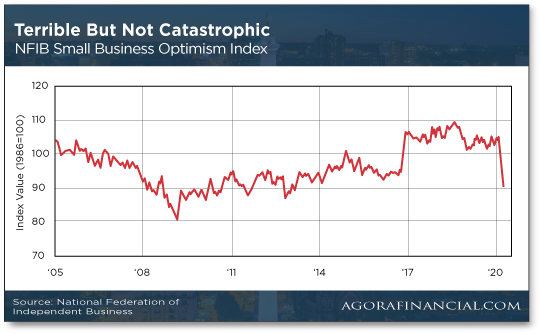 Nine of the index’s 10 components fell in April — including expectations for sales over the next six months, which are the lowest in the survey’s 46-year history.

But the one component that rose is expectations the economy will improve; indeed, those expectations sharply rebounded from March. Gone is the gloom from the March survey in which half of small-business owners fretted they wouldn’t survive another two months.

Still, the damage is unmistakable. The number of survey respondents thinking it’s a good time to expand? Lowest since March 2010. The single-most important problem identified by survey respondents? Poor sales, cited by 19%. Up until now, the biggest problem was finding qualified help.

The major U.S. stock indexes are treading water today. They’re all in the red, but not by much.

At 2,922, the S&P 500 remains comfortably above the 2,800 level. That’s a key level our floor-trading veteran Alan Knuckman is eyeing, because it’s the midpoint between February’s record highs and March’s extreme lows. Looked at that way, some sideways churn isn’t a bad thing at all.

The main economic number of the day is the consumer price index — down 0.8% in April. The year-over-year change works out to plus 0.3%. The sound you hear in the distance is your 2021 cost-of-living adjustment for Social Security getting flushed down the toilet.

Even the real-world inflation rate from Shadow Government Statistics has collapsed; at 7.9% it’s the lowest since late 2015.

Has the Mouse become the canary in the coal mine?

Last week, Disney (DIS) cut its dividend. Our income specialist Zach Scheidt is hearing from readers who worry whether more companies will do likewise.

For Disney, Zach says the move makes sense. “The company is being hit on many different sides of its business. Theme parks have been shut down, sports broadcasts have been cancelled and few people are shopping at retail stores selling Disney-licensed products.”

Elsewhere, “Ford and GM both suspended their dividends as demand for new vehicles dropped and production dropped off so employees could social distance. We’re seeing dividend cuts at energy companies, hotel chains and manufacturing firms. These companies are focusing on conserving their cash so they can stay in business.”

But there’s good news, too, Zach says. “Companies that continue to pay dividends — and even grow their dividends — will become even more popular with investors who need that income.”

Zach has a three-part litmus test for every recommendation in his Lifetime Income Report — safety, growth and income. Companies that meet the test “will be all the more attractive to investors, helping to drive the price of these stocks (and your overall wealth) higher.

For the record: Effective today, the Federal Reserve has begun buying ETFs made up of corporate bonds.

You thought that already happened? Nope, the Fed announced its intention to do so weeks ago… but it never pulled the trigger. The mere act of jawboning was enough to help prop up the stock market.

Anyway, now it’s underway. Nor will it end here. With the Fed breaking the taboo of buying corporate-bond ETFs, corporate bonds themselves are next.

Really, the only thing the Fed has explicitly left off the table is purchases of stocks. For now, anyway…

Here comes the “scarlet A” for anyone who deigns to “spread misinformation” on social media.

“Twitter announced Monday it will start alerting users when a tweet makes disputed or misleading claims about the coronavirus,” reports The Associated Press.

The move comes on the heels of YouTube threatening to take down any videos with information that runs counter to the guidance of the World Health Organization. The pandemic has put the social media giants’ propensity to act as “hall monitors for adults” on steroids.

So here’s something we’d like to see — a Twitter account that does nothing but remind users of past failures by the “experts” who presume to dictate to us.

Like when the WHO said on Jan. 14 there’s “no clear evidence of human-to-human transmission.” Or when Anthony Fauci said on Feb. 17 that the risk posed by the virus is “just minuscule.” Or when the surgeon general tweeted on Feb. 29, “Seriously people- STOP BUYING MASKS!”

It’s all factual, in the sense that these people and institutions are on the record saying these things, right? We’d love to see someone mess with Twitter’s algorithms in this way, just to watch the hilarity ensue.

Anyone out there who’s got extra spare time these days up for it? (Not us, that’s for sure…)

Back to Disney, and a bizarro knock-on effect of the pandemic for one of its most high-profile brands.

Because it has no live U.S. sports to run at the moment, ESPN is resorting to games held by the Korea Baseball Organization. To keep the telecast a bit more lively for U.S. audiences, ESPN2 is interviewing benched American players between innings. Two days ago, the network interviewed Cincinnati Reds pitcher Trevor Bauer via FaceTime. 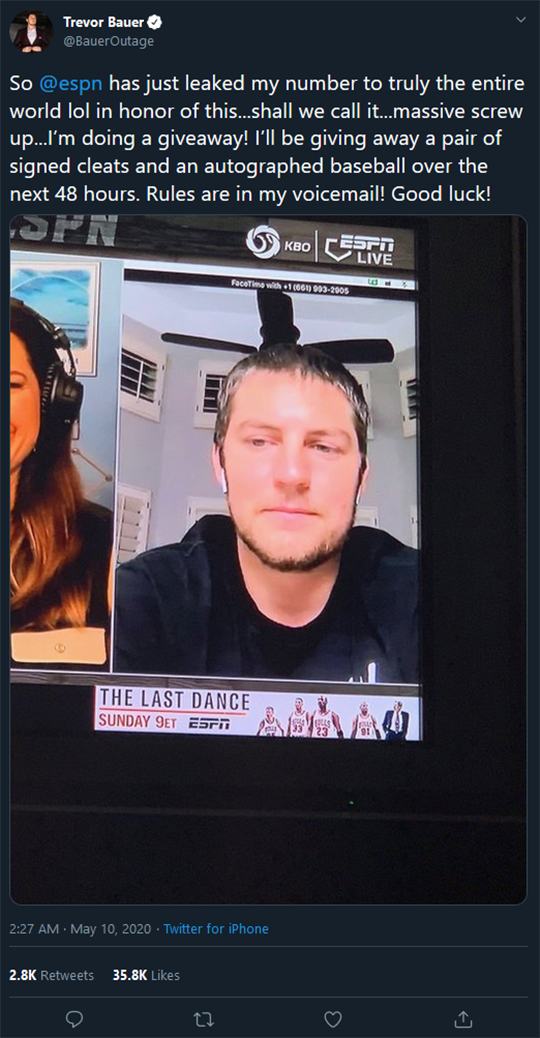 Wonder how long it took him to reach a live person for help at whoever provides his wireless service. Heh…

“Promoting products made in the USA is the patriotic thing to do,” a reader writes after yesterday’s 5, “and the jobs lost in closing Lenox Corp’s last U.S. factory are an unfortunate hardship for those 159 employees and their families.

“I strongly refute the claim that demand for fine china has dried up due to retail stores closing. More likely, Lenox Corp.’s management has failed to understand the current generation’s purchasing habits and/or has been late in adopting an online sales approach. Historically, all products have a life cycle — could this possibly be the last days for fine china?

“Outsourcing manufacturing to China or Mexico does not guarantee new life for a dying product. Certainly, we all have to eat, but must we eat off Lenox fine china? Convince me!”

The 5: Dunno, we’re not privy to the decisions management made. All we know is that the lockdowns are having all manner of second-order effects the pundits didn’t see coming… and Lenox’s decision calls into question the narrative about the pandemic accelerating the “reshoring” phenomenon that was already underway thanks to the trade war.

One other wrinkle: Lenox’s customers over the years have included the White House. Going forward? Hmmm…

“Dave Gonigam should continue denying the danger of COVID-19,” writes a reader who we can best describe as, um, inattentive.

“He should go out and party with his friends. Take a replacement job at a meatpacking plant. Practice with church choirs in airless basements. Take commercial jets, without a mask. Hug his elderly relatives in nursing homes. And, by all means, help the front-line hospital ICUs regularly during the next few months. For, after all, he is invulnerable to this plague. And, if he should survive, he can donate his blood to the thousands of patients who are on ventilators.”

The 5: Really? We were wondering back on Feb. 24 what the hell was taking the WHO so long to label the outbreak a pandemic. (It didn’t happen till March 11.)

On a personal level, I was among the legions who voluntarily shut in days before the orders came down from their respective state capitals — see above.

Near as we can tell, what set the reader off was a simple query yesterday: “When precisely did we shift from ‘must prevent the hospitals from being overwhelmed’ to ‘must wait out development of a vaccine’?”

This simple questioning of the authorities and their priorities was too much for the reader. Hope he had someone with some smelling salts nearby…

P.S. Really, you don’t have to believe the two doctors in California who got booted from YouTube, or the “Plandemic” lady, or whoever the “alt” star of the day might be… to justify a modicum of skepticism about the “experts” to whom we’re supposed to defer.

Again, see above. As the cool kids say, we’ve got receipts. Dates and everything. Look ‘em up. Start here.

But simply having the temerity to question the authorities’ wisdom in light of their documented track record apparently puts us in the camp of “deniers.”

Fine, whatever. Ain’t gonna be no convincing the guy otherwise, so no point trying…