It’s happening: The 5 reported yesterday the Federal Reserve’s decision to do something never done in the central bank’s 106-year history — buy corporate bonds.

In April, the Fed intimated spending on corporate debt-loaded ETFs was on the table, but it didn’t mash the buy button until Tuesday.

And bond yields responded to the Fed’s unprecedented intervention… 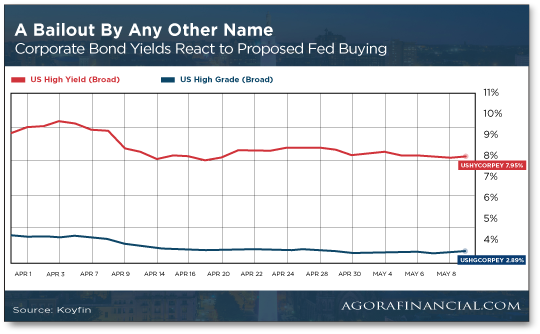 Wait, there’s more: The Fed will be buying bonds directly from companies in the very near future — all in an effort to bolster corporate balance sheets seriously dinged by pandemic shutdowns.

And who knows? The Fed might even be wheeling and dealing with one tech juggernaut soon enough…

According to our investment specialist Zach Scheidt: “On Monday [May 4] Apple Inc. (AAPL) borrowed $8.5 billion by issuing a series of new bonds.” (Interesting timing, huh?)

“This kind of financial move might make sense for a lot of companies,” he says. “After all, the coronavirus crisis has made it difficult for some companies to manage cash flow and cover their day-to-day expenses.”

Except that doesn’t describe Apple. Not even remotely…

“At the end of last quarter,” Zach says, “the company reported a whopping $190 billion in cash. That's plenty big enough to allow AAPL to cover its expenses for years — even if sales slow because of coronavirus.

“And for the last few years, Apple has been generating anywhere from $9 billion to $28 billion in extra cash every quarter.

“So why would Apple add $8.5 billion of debt to its balance sheet?” Zach says.

“Apple's capital raise doesn't make a lot of sense if you think about the company's current business,” he says.

But Zach, for one, isn’t buying it…

“I've got my hunches,” he says, “this is part of a larger plan. A plan that… will ultimately leverage Apple’s strong financial position in a season when many other companies are struggling to stay competitive.

“My educated guess is that Apple is building a cash hoard to finance a major buyout transaction,” Zach says.

“Frankly, with nearly $200 billion in total cash,” he continues, “Apple could be planning for a series of buyouts, helping the company expand its business into new areas.”

And as a result of the coronavirus, “Many of these buyout targets are now trading at a discount to where they were just a couple of months ago.”

According to Zach, likely buyout targets include…

If Apple’s chasing down a buyout(s), how can everyday investors profit from the situation? The most straightforward answer? Buy AAPL shares, of course.

Zach says: “I’m a fan of Apple. I’ve recommended the stock for years and my readers have grown their wealth and generated income from AAPL’s dividend.”

The more complicated answer: If you own shares of a buyout target before the announcement hits the newswire, “you’ll wake up to a giant profit,” says Zach.

“In order for a company to agree to be bought out,” he continues, “Apple [would need] to offer much more than what the stock is currently trading for.” We’re talking premiums of 20%, 40% or more; that said, as soon as the deal goes mainstream, shares spike.

The catch? “If you wait until after a buyout deal is announced,” Zach says, “you’ll miss out on the gains because the stock will shoot higher before you get a chance to act on the buyout news.”

So while Zach and his team are researching Apple’s buyout targets, Zach notes two bills — signed into law on March 23 — will pave the way for Americans to get in on the ground floor of companies that will be the very lifeblood of companies like Apple moving forward.

Regardless of which type of company Apple buys — manufacturing plant, software company, media firm or even a carmaker — they’ll all rely on the latest technology revolution… that might kick into high gear as early as May 28.

“The bulls looked a bit tired Tuesday afternoon as the market cascaded lower into the close,” says analyst Greg Guenthner.

“As we’ve discussed, the averages are sitting near key levels,” he says. “I suspect we’ll see some false moves in both directions before the market makes up its mind.”

Greg concludes: “We might chop along the rest of the week depending on how stocks react during today’s session.”

To wit, we turn our attention to the market, where the Big Board’s pitched 300 points to 23,450 and the S&P 500 Index has dropped 38 points to 2,840… still above that key level our trading vet Alan Knuckman mentioned Tuesday.

[Well, that was quick.] All’s well that ends well for Tesla?

According to the AP: “It appears the dispute between Tesla and San Francisco Bay Area authorities over the reopening of a factory in the face of shutdown orders is coming to an end.”

The Alameda County Public Health Department announced via Twitter (how else?) that the electric carmaker’s Fremont plant would be completely up and running this coming Monday, provided Tesla makes good on its promise to make workers’ health a priority. 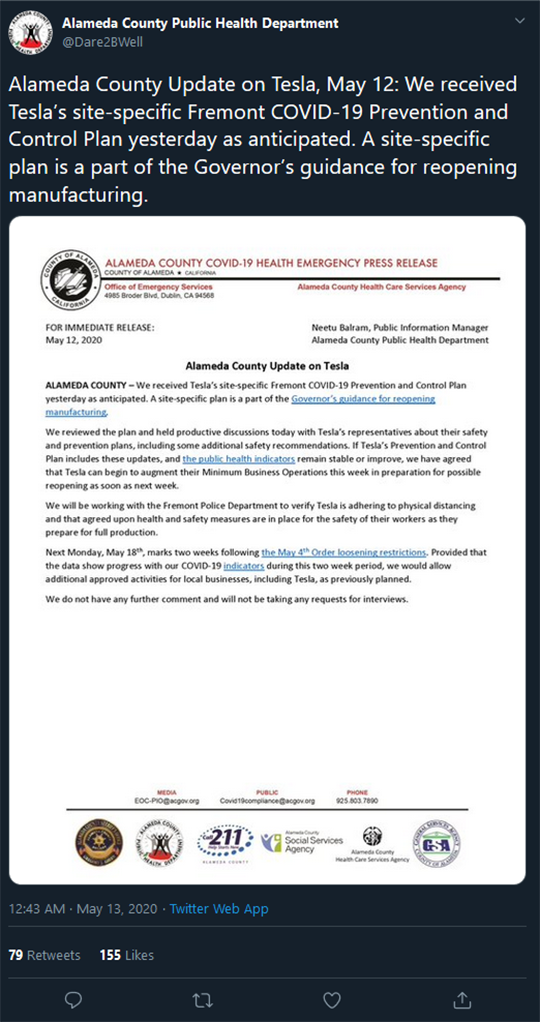 The AP says: “It wasn’t clear from a press release whether Tesla would face any punishment for reopening Monday in defiance of county orders.”

Probably not. No lunatic tweets are forthcoming from our favorite billionaire eccentric…

Are you sitting down? There’s some stomach-dropping data to report on public pension funds. On average, public pension plans lost 13.2% in the first quarter of 2020… that’s “slightly more than in the fourth quarter of 2008,” says The Wall Street Journal. 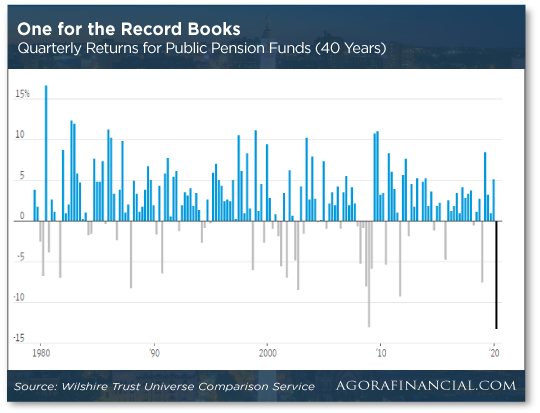 “As bad as the first-quarter returns were, they likely don’t show the full extent of the pension losses because reports on the value of private equity, real estate, infrastructure and other private assets often arrive one quarter late,” the WSJ notes.

We’ll break the bad news then…

“Many companies have had to postpone, slow down or even temporarily suspend clinical development for promising new therapies,” says our breakthrough technology expert Ray Blanco.

“With COVID-19-related therapeutics and vaccines being rushed through trials and pushed through the FDA decision-making process,” he notes, “non-COVID-19 therapies have had an opposite situation.”

Ray continues: “The situation hasn’t hurt biotech stocks in general, even in the current market environment. Far from it.

“Last week, the Nasdaq Biotechnology Index (NBI) was pushing to levels we haven’t seen in five years,” he says. “And yesterday, the NBI set all-time highs!

“Part of the rise has to do with health care itself being something of a defensive sector,” Ray says.

Think about it. Folks might cut their budgets to the bone, excising things like entertainment, eating out or travel (not that there’s much of that going on at present), “but we aren’t likely to cut back on prescriptions that we need,” Ray says. “Medicine is… right up there with food, water and shelter,” he says.

“The other [piece] of the puzzle is that biotechnology is absolutely essential to helping us pull out of the current COVID-19 mess.”

“We aren’t going to return to normalcy without attacking the viral source of our situation,” says Ray, “and that means breakthrough biotech gets to ride in and, hopefully, come to the rescue.

“There’s hope things can get back on track and biotech companies can get back to doing what they do best.” And for investors: “With biotech stocks starting to break out of a long-term trend,” Ray says, “there’s a real shot at big gains just up ahead.”

A three-star Michelin-rated restaurant is taking a fanciful approach to reopening after coronavirus restrictions.

Chef Patrick O’Connell of the Inn at Little Washington — about 70 miles west of D.C. in Virginia — is obeying Gov. Ralph Northam’s “Phase One” orders for his restaurant, meaning al fresco dining only at 50% max capacity. 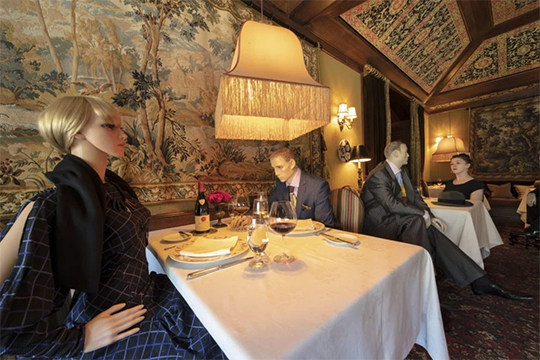 Courtesy: The Inn at Little Washington

“Instead of letting tables sit vacant, the whimsical chef plans to outfit his dining rooms with mannequins,” says the Washingtonian.

“The chef (who majored in drama in college) has been working with Shirlington’s Signature Theatre to get the faux humans costumed in 1940s-era garb.”

O’Connell’s even encouraging the restaurant’s wait staff to interact with the life-size dolls, pouring them glasses of wine and water. Drama major, indeed…

“I think it would do people a world of good to reduce their anxiety level,” says Chef O’Connell.

Or, ya know, not. Automatonophobia — the fear of humanoid figures — has gotta be among the top-10 worst fears. Top 20 max…

P.S. With a stroke of his pen, President Trump recently endorsed the biggest income opportunity of the decade. If you missed it… here is what you need to know.

Trump signed two bills into law that can help income-seeking Americans like you and me to become cash-rich.

No, this isn't the stimulus package. This is something completely different.

P.P.S. The 5’s taking the wraps off something we’ve been working on for months — something we think will be a value-add for readers like you. Keep checking back for more information in the days to come.