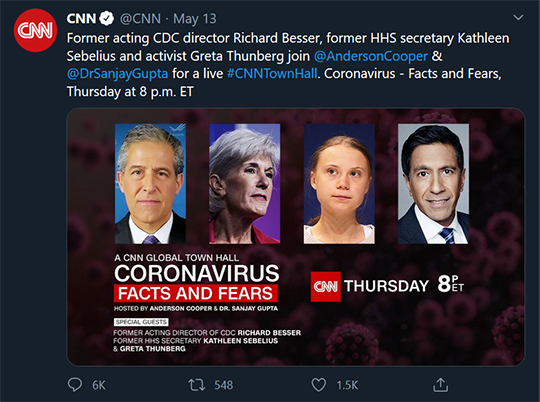 Up until today we thought it was passing strange — the people screaming loudest about “Donald Trump is not a scientist!” nonetheless ascribing scientific expertise to… Bill Gates.

But Greta Thunberg? Really? They’re just trolling us all now.

Not that we’re surprised. From the beginning we sensed the climate-change crowd seizing on the pandemic as an opportunity.

Our suspicions were confirmed last week when 200-some celebrities signed an open letter declaring “it is unthinkable to ‘go back to normal’” — coincidentally, at the very moment we were learning that thanks to the lockdowns worldwide, global carbon emissions had reverted to levels of a decade ago.

But leave aside the climate-change angle of the pandemic. Let’s take up the more basic question of “saving lives” versus “opening up the economy.”

In the first place, we don’t like that framing. “Saving lives” sounds concrete and personal. “Opening up the economy” sounds abstract and cold — which is probably why many people recoil when Donald Trump says it over and over.

And then there’s this statistical model. Perhaps you’ve run across it elsewhere. It was bugging us for days, and at first, we couldn’t put a finger on the reason… 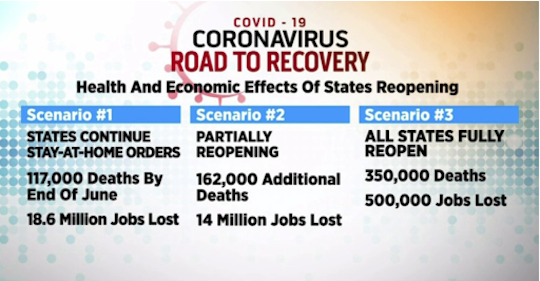 These estimates came from the “Coronavirus Policy Response Simulator” developed by the Wharton business school at the University of Pennsylvania.

The Penn researchers are adamant they’re not taking sides in the debate. “We are not going to take a position on how you think about that trade-off, but they’re very stark choices,” says Kent Smetters, director of the Penn Wharton Budget Model.

After a few days’ reflection, it finally hit us. It’s as if they’re saying, “Take a test-drive of our super-cool Coronavirus Policy Response Simulator! It’s your turn to PLAY GOD! Open up the economy and sentence people to death? Or keep things locked down and create untold hardship in the here and now? THE CHOICE IS YOURS!!”

At this moment, we wish to introduce an impertinent question…

What if it’s a false choice? What if the whole “saving lives versus opening up the economy” thing is bogus?

On a worldwide scale, that appears to be the case already. It’s right there in the Los Angeles Times: “The economic devastation the pandemic wreaks on the ultra-poor could ultimately kill more people than the virus itself…

“The United Nations predicts that a global recession will reverse a three-decade trend in rising living standards and plunge as many as 420 million people into extreme poverty, defined as earning less than $2 a day. As for the 734 million people already there, the economic tsunami will make it harder for them to ever climb out…

“Hunger is already rising in the poorest parts of the world, where lockdowns and social distancing measures have erased incomes and put even basic food items out of reach.”

So maybe there’s no Grand Moral Dilemma at all? Or if there is, it’s confined only to developed countries? It’s literally a first-world problem?

Don’t know. Unlike the professors and the pundits and the politicians, we don’t presume to play God around here. But we’re pretty sure the world and America would be a better place the sooner they stopped.

Meanwhile, another 3 million Americans have joined the ranks of the unemployed.

It being Thursday, the Labor Department is regaling us with the number of first-time unemployment claims.

From its peak seven weeks ago, the weekly figure is sloooowly climbing back down. But as you can see from a 10-year chart, it’s still horrific — a hair under 3 million. 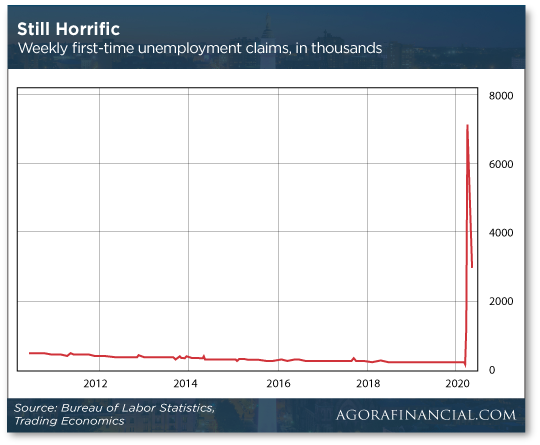 The total over the last eight weeks is now 36.5 million. That’s out of a workforce of 162.9 million. That translates loosely to an unemployment rate of 22.4%.

As the AFP newswire explains, “Elective procedures have all been put on hold since March, people with chronic illnesses or even emergencies are avoiding coming to hospitals out of fear they may become infected with the virus and lockdowns have reduced the numbers of accidents.”

Yes, a lot of the job losses have been among paper pushers, but nearly 10% of them have been hospital workers. “The hospital can't afford all of the staff to be on duty and just sit around," says Dayna James, an ER nurse in south Florida.