We have seen the future of the American restaurant. And it is sterile.

“Sterile” not just in the sense of stepped-up hygiene… but also in the sense of predictable, charmless, cookie-cutter. Also, owned by professional investors far from where you live.

Last night around dinnertime on the East Coast, the CDC issued new guidelines for workplaces, restaurants and bars.

“Bars and restaurants,” summarizes Bloomberg News, “shouldn’t reopen until they can follow applicable state and local orders, and until they’re ready to protect people who are at higher risk for severe illness, the guidelines say.

“Then they should encourage social distancing — add spacing of tables and stools; encourage drive-thru, delivery and curbside pickup; limit party sizes and occupancy; avoid self-serve stations; and restrict employee shared spaces. Employers should check staff for signs and symptoms of illness as they arrive, ‘as feasible.’”

Perhaps none of that is particularly surprising. But what does it mean for the future of your favorite restaurant if it happens to be locally owned?

Already the “temporary” closings have proven terminal for countless eateries. A search on Google News and Twitter for “permanent restaurant closures” is profoundly depressing. Here’s a random example we plucked from Albuquerque, New Mexico… 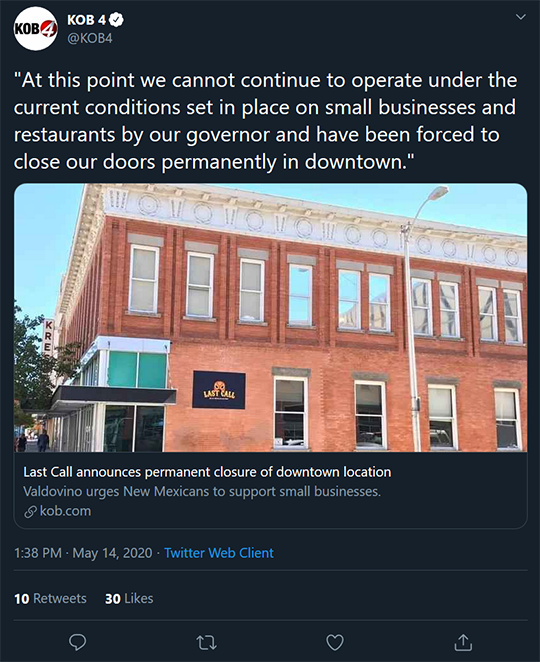 Reading the trade press, the outlook for the survivors is just as grim. From Restaurant Business magazine: “Four out of five independent restaurants said they were unsure whether they’d be able to stay in business until post-pandemic operations return to normal, according to a recent James Beard Foundation study.”

But what’s “normal,” anyway? To scrape out a profit, a typical restaurant requires full occupancy that turns over at least two or three times a weekend. How are profits possible with social-distancing rules that will remain in place perhaps indefinitely?

And then what? Even in a depression, even at higher prices, people will still want to eat out now and then. Demand will be there. But who would step in to meet the supply?

In the same way that hedge funds and private equity players bought foreclosed houses after the 2008 bust and turned them into rentals… we can easily imagine well-heeled investors taking advantage of the Federal Reserve’s low, low interest rates to buy shuttered independent restaurants at bargain prices, remodel them to easily meet social distancing and other requirements and reopen them.

Of course, it won’t be the same restaurant that was there before, just with more elbow room. It will be a soulless, uninspired, focus-grouped affair. What else would you expect from out-of-town ownership that has no connection to the people?

And did it really have to be this way?

Did it really require the heavy hand of government to keep people from congregating in restaurants and “stop the spread”? Are restaurants incapable of responding to customer demand for more social distancing?

“My family and I own four small businesses in the restaurant and automotive industries, employing hundreds of Idahoans,” writes the Gem State’s lieutenant governor, Janice McGeachin.

Under Idaho’s lockdown rules, dine-in restaurant service resumes tomorrow — after 7 and a half weeks.

“While most Idahoans supported the public safety aspect of the governor’s stay-at-home order,” McGeachin continues, “the one thing that is missing in all of this is the confidence that Idahoans are smart enough to put in place public health protocols so they can reopen their business, welcome customers and take care of their employees.”

At this point, McGeachin speaks for a lot of people in a lot of other states…

Another day, another raft of miserable economic numbers.

Begin with retail sales, which collapsed a record 16.4% in April. That’s on top of a revised 8.3% drop in March.

Even if you back out auto sales (notoriously volatile from month to month) and gasoline sales (rising or falling prices can skew the number)… it makes no difference: The drop is still 16.2%.

Then there’s industrial production — down 11.2% in April, another record. All three components of the number registered huge drops, with manufacturing tumbling 13.7%. The capacity utilization number is also a record low; only 64.9% of the nation’s industrial capacity was in use last month. 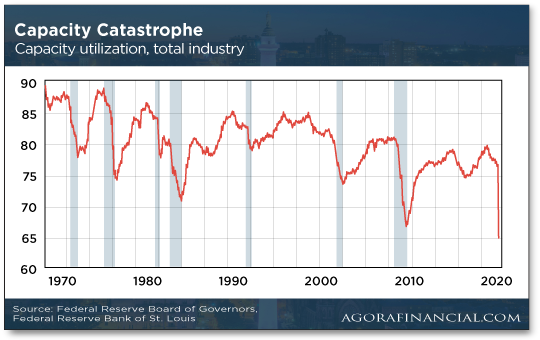 If you want something that kinda-sorta represents hope, it comes from the first so-far-in-May indicator, the Empire State survey of manufacturing in New York state. Any number below zero indicates contraction, and the May number is minus 48.5… staggering, but better than April’s minus 78.2.

Gold is reacting to these numbers with the expectation of more EZ money from the Federal Reserve… and rallying.

At last check the bid is $1,745. If that holds by day’s end, we’re looking at the highest weekly close in seven years — a very good sign for the weeks and months ahead.

The stock market’s action today has been choppy. At last check the major indexes are all down about two-thirds of a percent, with the S&P 500 still holding the line on 2,800.

We’ve mentioned 2,800 as a key level to watch for more than a week now… and others are starting to catch on. “There are more than a few eyeballs on this so-called line in the sand,” says our chart hound Greg Guenthner… 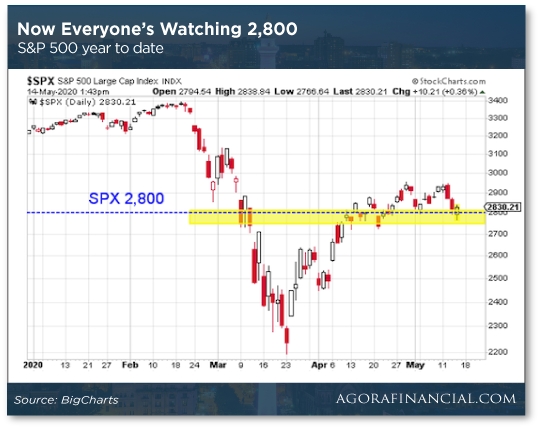 “… which means a strong possibility for fake-out moves in both directions before the market finds its way.”

The Federal Reserve’s balance sheet is on the move again, now that the Fed’s buying corporate bond ETFs.

We noted the start of those purchases in real time on Tuesday. The Fed wound up buying $305 million worth of bond ETFs in only two days.

With that, a two-week slowdown in the growth of the Fed’s balance sheet is over. 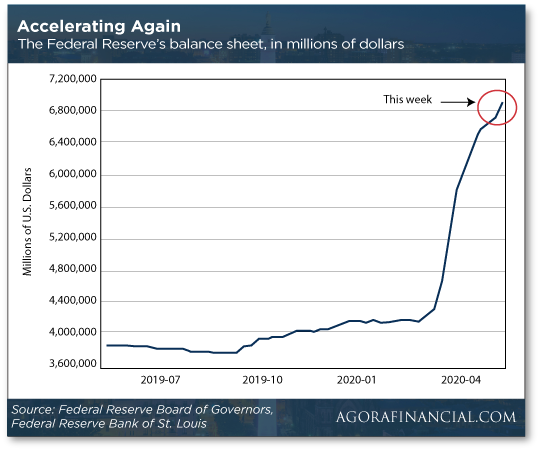 Of course, the Fed propping up the corporate bond market will have unintended consequences.

“According to Barron’s, $14 billion worth of debt had already been repaid in this manner. This practice of swapping new debt for old, which usually is a step toward taking on more debt in total, could be a slippery slope. Especially for companies already stretched thin financially.”

We’re sure it’ll turn out just swell. We’ll be watching…

That was quick: The French pharmaceutical giant Sanofi has backed away from a promise to supply a potential coronavirus vaccine to the U.S. market first.

CEO Paul Hudson aroused French nationalist ire when he told Bloomberg News that the U.S. government had “the right to the largest pre-order because it’s invested in taking the risk.”

Not so fast, said French Prime Minister Édouard Philippe; access for all is “nonnegotiable.”

Hmmm… According to the BBC, “Sanofi's COVID-19 vaccine research is partly funded by the U.S. Biomedical Advanced Research and Development Authority (BARDA) but in recent years Sanofi received tens of millions of euros in tax credits from the French government to help its research.”

Two takeaways from where we sit: 1) There’s an awful lot of government money pouring into the pharma giants. 2) The money isn’t very well spent (are you surprised?) given how little innovation comes out of the pharma giants. Mostly they keep their pipeline of new drugs full by buying smaller companies that do the heavy lifting of research.

Yes, that last fact is investable. Especially with the race for a COVID treatment. Watch this space in the weeks to come…

It’s not one of the more popular economic indicators, but it does point to the start of a “recovery.”

Our resident futurist George Gilder spotted an intriguing chart on the blog of economist Scott Grannis. It falls under the category of “high-frequency data” — which Wikipedia defines as “time-series data collected at an extremely fine scale… intraday observations that can be used to understand market behaviors, dynamics and microstructures.”

So here’s a chart of high-frequency data Apple compiles from millions of iPhone users. “The data in the chart,” Mr. Gilder writes, “shows that the low point in driving activity was Easter Sunday (April 12). Since then, there has been a steady and continuing rebound of over 50% in the number of requests for driving directions.” 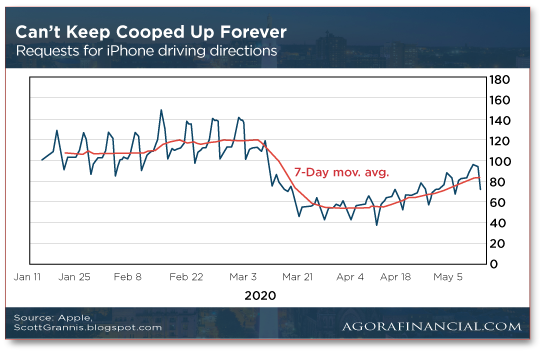 Meanwhile, “data from the TSA shows that the number of passengers processed at U.S. airport security checkpoints has almost doubled (based on a seven-day moving average) since mid-April.

“As more states around the country open back up in coming weeks, this trend is likely to continue.”

Delta plans to retire all 18 of the long-haul wide-body jets currently in service; the model has been part of the airline’s fleet since 1999. Delta’s got plenty of Airbus models of similar size that can do the same job.

The company will take a $1.7 billion accounting charge… but on the other hand, mothballing the jets will reduce Delta’s daily cash burn to zero by year-end, down from the current $50 million.

Ventures Byron King, editor of our sister e-letter Whiskey & Gunpowder and a longtime Boeing watcher: “Indirectly, it’s a forecast — self-fulfilling at that! — that large numbers of long-range travelers will not be crisscrossing the sky anytime soon.”

Now for a blast from the Prohibition past, and a burning question about the future…

According to the New York Post’s Page Six gossip site, “A famous Upper East Side bar and lounge as well as a trendy downtown hotel have been opening up in spite of the coronavirus lockdown — but strictly for discreet friends of the owners and managers.”

The Post also reports a small invite-only party at Omar’s La Boîte on the Lower East Side. “I know at least five people who were at [the hotel bar] on Monday night,” an anonymous source told the paper. “I called one of them and said, ‘I heard you were at [said hotel bar] last night, and she sounded shocked. She said, ‘How did you know!’”

The owner issued a statement: “We are looking into this distressing report. I’m sheltering outside the city, certainly wasn’t there, and I had no knowledge of any social gathering on-site.”

Sounds like he’s shocked — shocked! — to find that there’s social drinking going on in there. Heh…

P.S. It’s one of the most “tiny”… and yet most powerful… financial instruments out there.

Tiny because it trades for about… 25 cents.

And yet a small group of beta-testers was able to leverage this instrument for massive gains — “$17,750 in 72 minutes!” recalls one of them.

Imagine if you could make just one-fifth of that total.