Theater of the Absurd

Financial media folks scratched their heads last week, wondering aloud about the rumor that Amazon was interested in buying AMC… What?

Last weekend, the U.K.’s Daily Mail was first to relay the rumor about Amazon’s potential buyout of movie theater chain AMC Entertainment (ticker: AMC). By Monday, Bloomberg’s Tara Lachapelle said: “What in the world is Bezos going to do with 11,000 exhibition screens?”

What indeed… It’s tough to come up with an industry more hard-hit by the coronavirus pandemic than theaters. I mean — masks or no — who’s going to pay to sit elbow to elbow with a bunch of germy strangers who’re eating, whispering, laughing and/or generally vaporizing the surroundings with droplets? Ew.

Lachapelle continued: “If the future of entertainment is streaming content, then a company like AMC Networks — the channel known for Breaking Bad and The Walking Dead — is a much more fitting candidate than AMC theaters.”

She left off a personal favorite, Mad Men, but we’ll give her some latitude. At least Ms. Lachapelle had the candlepower to dispel the Daily Mail’s rumor.

“While AMC Networks [ticker: AMCX] makes more sense than AMC Entertainment as an Amazon acquisition target,” says Bloomberg columnist Matt Levine, “AMC Entertainment has one crucial advantage, which is that its ticker is AMC.”

Hmm… You see where he’s going with this. 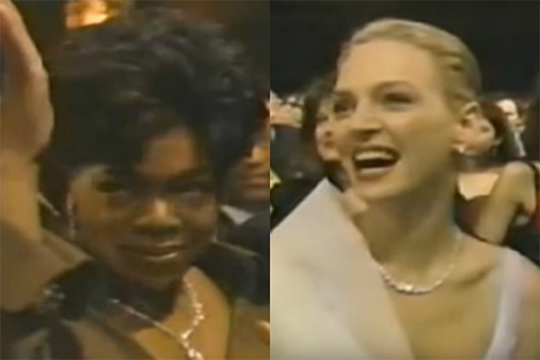 Levine continues: “If the rumor you hear is ‘Amazon is buying AMC,’ your first reaction might be ‘I need to buy some AMC stock,’ and so you go buy the stock of a company whose name and ticker are AMC. And then AMC Entertainment stock goes up.

So much momentum, in fact, that AMC shares rocketed last Monday… and gave financial pundits something to talk about for 24 hours or so.

Our buyout expert Zach Scheidt alerted his readers last week: “Amazon triggered a 56% surge for AMC Entertainment (AMC) — all thanks to a news report that the two companies were negotiating a buyout.

“The news was enough to hand investors a tremendous overnight gain,” he says. “And some investors who bought more aggressive option contracts for shares of AMC walked away with much bigger triple-digit percentage gains.

“And while the ink was still drying on my alert to you,” Zach continues, “shares of Grubhub (GRUB) vaulted 29% higher after news came out that Uber Inc. (UBER) is in talks to take over the food delivery business.

“Thanks to low interest rates and government stimulus programs, big companies can easily get their hands on billions in cash,” says Zach. “And that cash can then be used to buy out entire companies at discount prices.”

Zach concludes: “These… buyout transactions are going to be happening much more frequently in our post-coronavirus-crisis world.”

[Ed. note: But how do you know which companies to buy? For that, watch your email inbox tomorrow morning for an invitation to an exclusive event.

Again, be on the lookout for an email with the subject line: We’re live on Zoom! Here is your link.]

“The strength in the precious metals market is finally bringing some momentum to the gold miner trade,” says our analyst Greg Guenthner.

“The miners suffered alongside the broad market when stocks broke down in March,” he says. “Yet after bottoming out on March 16, the VanEck Vectors Gold Miners ETF (NYSE: GDX) exploded higher, breaking out to multiyear highs earlier this week after posting a clean double off its lows.”

Gains of about 4% last week are teeing GDX up for another sweet upswing. “GDX now appears ready to extend its gains after breaking above $35… 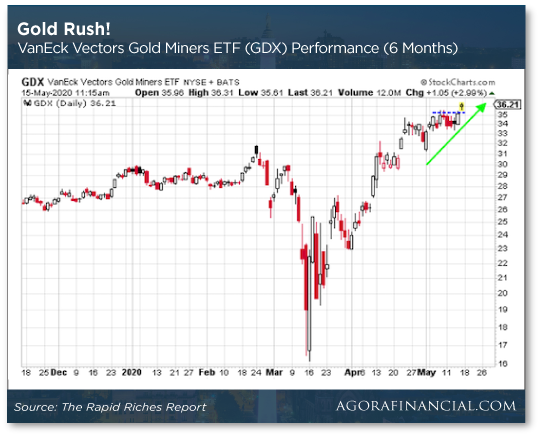 “Once again,” says Greg, “I don’t think the gold trade is going away. Trading opportunities in the bigger players and even the speculative miners will give you plenty of chances to book serious gains in the weeks and months ahead.”

Meanwhile, the price for West Texas Intermediate has spiked 11% today to $32.79 per barrel — a two-month high. This a day ahead of the June futures contract expiration…

CNBC says: “Monday’s jump is in sharp contrast to just one month ago when, on the day before the contract for May delivery expired, prices plunged below zero and into negative territory for the first time in history.”

Not to mention demand for oil might never be what it once was in life before coronavirus… particularly as the jet set stays on terra firma.

So it’s possible there will be another huge dislocation as happened last month… but not likely.

“Despite its popularity, the official unemployment rate does not capture all workers facing adverse employment conditions,” admits the Federal Reserve Bank of Chicago. We provide a brief update on the Chicago Fed’s survey we mentioned a few days ago…

“To count as unemployed, one must be out of work and either on temporary layoff or actively looking and available for new work,” the FRBC says. “This leaves out many people who want to work but did not look for work in the period covered by the data, as well as people who may remain employed but at substantially reduced hours.

“We also tabulate other detailed categories… such as those who are working part time for economic reasons, those who are on temporary layoff and those who are ‘marginally attached,’” says the FRBC. Furloughs, anyone? (More on that below.)

In order to account for these individuals — who’ve been especially disenfranchised by the pandemic — the FRBC has come up with a new measure for “labor market underutilization that is tailored to the COVID-19 crisis.”

And they’ve given it a catchy name: the U-Cov underutilization rate.

Accordingly, the FRBC says: “We are able to calculate the actual value of our U-Cov rate for April, which was 30.7% (not seasonally adjusted).”

To wit, a reader writes: “So the interesting thing that is happening is that large corporations are filing unemployment on behalf of furloughed workers.

“When I protested against my company filing ‘on my behalf,’ HR informed me that it was required by the state (GA).

“My guess is that my furlough helps the bottom line and the company gets ‘assistance’ from some federal handout… Ultimately, I lose money both ways as this legal fraud bumps the unemployment statistics into a serious doodoo bomb!”

The 5: As far as we can tell, Georgia’s the only state that requires companies to file on behalf of furloughed workers. And the best intentions of bureaucrats often backfire…

“The rule change was intended to streamline the process and ease the burden on unemployed people,” Vox reports. “In practice, some Georgians say it’s left them in limbo if their employer doesn’t file on their behalf every week.”

We’ve found nothing indicating companies get any fed freebies as a result… we’ll keep you posted.

(For what it’s worth, perhaps the unemployment-filing debacle has something to do with Georgia being the first state to reopen for business?)

Per Dave’s issue Friday, a reader writes: “For over 20 years, before we retired, we owned and operated Dairy Queen stores in Idaho.

“Ten locations at one point, with over 300 employees in the summer. We also had a burger menu, but our ice cream treats were our main business. Great in the summer. But we always lost money in the winter; our franchise agreements, though, required us to remain open. So we did our best to make enough in one summer to get us through to the next.

“It was a rare employee who understood what it meant to be in business. They would say, ‘We made $2,000 today!’ And I’d try to explain that we were lucky if we actually ‘made’ $100 in profits. Five percent of sales at the end of the year, after all expenses, was a good year. And all years were not good.

“Efficient restaurants attempt to keep the total of food costs and labor down to 50 or 55 cents out of every dollar. So that puts 45 or 50 cents in our pocket? No…

“Eight cents of every dollar went to franchise fees and marketing, required in our contracts. We had building leases that required another 8 cents, on average. And then we had to pay the utilities and insurance and maintenance — lots of maintenance. New equipment. Supplies. Uniforms. Accountants. Donations to the community.

“And taxes. FICA and unemployment taxes on the payroll. Property taxes on the buildings ($16,000 a year at one 2,500-square-foot location). And then we paid another ‘personal property tax’ annually based on the value of the equipment, furniture and fixtures in the store. And if we managed a profit after all that, there were income taxes to pay.

“I’m not complaining. It was good to us. Of course, we risked everything we had and we worked our butts off; 17-hour days and 80-hour weeks were common, for over 20 years.

“Restaurants and bars run on thin margins and rely on cash flows. The lockdowns have to be killing them. And now with these ‘phased’ reopenings, when health departments have free rein to dictate limited seating, they are promoting the illusion that they are allowing them to reopen — but only at a loss! Many will still do so; they are desperate to salvage their businesses. But how long can they survive?”

The 5: Thanks for the in-the-trenches perspective on the restaurant biz… more food for thought. (No pun intended.)

P.S. Keep an eye on your email inbox tomorrow — subject line We’re live on Zoom! Here is your link — for access to an online event that might hold the key to red-hot buyout deals.