Before we start the clock: As you can see, we’ve overhauled the look of The 5 effective today. After five years, we were due to shake things up — if only a little bit.

Along with the facelift come some other changes. Here’s the most important one: The daily issues will be coming from the following email address — info@email.5minforecast.com. You’ll want to “whitelist” it so you won’t miss anything. (We’ve furnished simple instructions on how to whitelist an email address right here.)

The address where you can send reader feedback has changed, too — feedback@5minforecast.com. For convenience, you’ll find that address repeated at the bottom of every issue, as always.

Finally, our 13-year archive is now hosted at its own website, 5minforecast.com.

The full-time rumor mill that surrounds every new release of an Apple iPhone cranked up to warp speed yesterday.

According to Gordon Kelly at Forbes, Apple will release the iPhone 12 in October. That’s a big deal because as Kelly points out, “With the exception of the iPhone X (November), every iPhone since the iPhone 5S has gone on sale in October.”

Per Kelly’s sources, perhaps not every model will be available the same day in October. “That said, what is clear is Apple's pulling out all the stops to get its global supply chain network running to deliver these smartphones to retailers on time. So, if Apple does miss, it won't be by much. That, in itself, is a huge achievement.”

Interesting news, for sure. Actionable news? Not much. AAPL shares were down a bit yesterday; they’re up a bit today. The corona-crash barely registers in Apple’s scheme of things; the share price now is only a few bucks off its record high notched on Feb. 10… 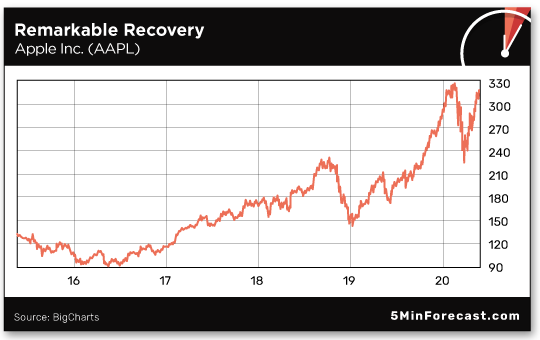 Apple’s been a favorite of our Zach Scheidt for years; we included it in a rare “three free stock picks” episode of The 5 at year-end 2015. The dividend is a modest 1.05%, but with such steady capital gains, who cares? Zach says AAPL has executed perfectly on its transition from a go-go growth company to a mature stalwart.

Apple’s execution is about to move into a new phase — one Zach says could be very lucrative if you position yourself right.

Why would AAPL do that when it’s already sitting on a cash pile of $190 billion?

“My educated guess is that Apple is building a cash hoard to finance a major buyout transaction,” he suggests. “Frankly, with nearly $200 billion in total cash, Apple could be planning for a series of buyouts, helping the company expand its business into new areas.”

Unlike Apple, the share prices of many potential takeover targets are still beaten down from the corona-crash. Nothing like buying at a discount, right?

Of course, as soon as the news hits about a deal — or even a potential deal — the share price of the buyout bait leaps higher. No longer actionable news.

Wouldn’t it be nice if you knew in advance which companies Apple is most likely to snap up?

Yesterday morning, we sent you a link to a confidential Zoom call in which Zach addressed that very question, with the help of a proprietary indicator that’s proven uncannily accurate in the past.

A replay of that briefing is still available to watch right now… but because Apple could make a move at any time, we’re shutting off access at midnight tomorrow. We suggest you give it a look right now while you still have the chance.

“The free market is dead,” observes Alan Knuckman — usually our eyes and ears in the Chicago options pits, but they’re still closed till June 1, so he’s holed up in his Upper Midwest lakehouse.

Picking up on the disconnect we highlighted yesterday, he points out “the stock market’s not the economy.” While the economy is terrible, “the Federal Reserve is going to do anything and everything to keep this market afloat. They even talk about buying stocks. The Fed said that it's not likely, but they didn't rule out! This money flow is unprecedented — and it’s going to continue.” 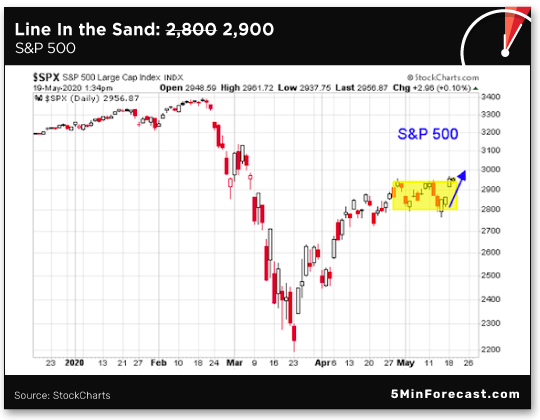 The standout economic number of the day is one we don’t mention often. Mortgage applications have been staging a whale of a recovery in recent weeks. Applications for new purchases last week were down only 1.5% from a year earlier. Refinances, meanwhile, are up 160% year over year thanks to lower rates — 3.41% on a 30-year fixed.

For the record (and speaking of no free markets anymore): The United Kingdom has just sold government bonds with a negative interest rate for the first time.

For the privilege of lending money to the Crown over the next three years, you’ll end up paying the Crown a yield of minus 0.003%. And yes, there was demand — about $4.6 billion worth of these bonds exited the doors.

It was only a week ago the head of the Bank of England ruled out negative rates: “It is not something that we are currently planning for or contemplating.”

How about these United States, you wonder? Our old friend Chuck Butler at the Daily Pfennig e-letter has long observed that when British policymakers break one or another taboo, it takes about six months for the phenomenon to cross the pond.

New developments on the cannabis-legalization front: Our penny pot stock authority Ray Blanco is seeing an accelerated push in one state after another, thanks to the corona-crash.

Little wonder: Tax revenue is way down, while spending on unemployment benefits and Medicaid is way up.

“Governors are starting to wish they had legal, taxable cannabis businesses to help mitigate the economic impact of COVID-19,” Ray tells us. “For example, there’s New Mexico’s Gov. Michelle Lujan Grisham who said: ‘I wish we had passed medical cannabis because that was $100 million. Those are pre-COVID-19 estimates, but $100 million in the budget. And I am very sad about that.’”

Elsewhere, “The Louisiana House recently voted overwhelmingly in favor of approving medical marijuana for any debilitating condition, as well as approving delivery services. In New York state, legislators are calling for a push to legalize the plant, and in Minnesota, the state House voted to allow marijuana flower sales.

“I expect more state action as we move through the summer, with states like New Jersey set to put the matter to vote on Election Day.” Just when many pundits thought cannabis stocks were down and out, here comes the second wave.

Mark Zuckerberg as the savior of small business? Really?

That’s our reaction to Facebook’s announcement of Facebook Shops — “enlisting small businesses to sell their wares through its platform and giving them access to its technology,” per The Wall Street Journal.

We pray any business owner who avails themselves of Facebook Shops diversifies their online presence to other platforms like Amazon, eBay or Etsy. Because you sure won’t have any negotiating power with Zuck.

Two years ago, Facebook changed its algorithm so users would see more posts from friends and less content from publishers. The move instantly cratered traffic to an outfit called LittleThings that published feel-good stories targeting women. Traffic collapsed 75% and within weeks Little Things was no more.

And you think corona-restrictions on businesses are tough where you are? Be grateful you’re not in South Africa.

From Bloomberg: “South African stores can only sell shoes if they are ‘closed toe,’ and short-sleeved shirts if they are promoted or displayed to be worn under jackets or jerseys, according to the latest list of government rules that spell out what’s allowed during a nationwide lockdown.”

Arbitrary? “We are in the place of folly that becomes tragedy,” says Adrian Saville of Cannon Asset Managers in Johannesburg.

The rules “seem more at place during the 1980s under the Soviet Union than they do in a democracy like South Africa,” says Dean Macpherson of the country’s main opposition party.

“Great piece yesterday!” a reader enthuses after our full-issue lament over, among other things, the stifling of innovation outside the tech sector.

“Basically a very concise essay that pretty much covered all the bases… no buts about it. I would have been very happy if your clock had messed up and this issue had become The 15 or The 30. You very succinctly expressed many of the things that have convinced me this country (and maybe this world) is irrevocably on the downslope.

“Fortunately for me, I’m a retired boomer in your 9.99% category. I’m at a stage of life where I figure I won’t be around when the can runs out of road, and I started pivoting my portfolio to silver and gold early enough that hopefully our modest needs will be supported regardless of the fallout from the elites’ (boy, I hate that term!) greed and stupidity. Making an effort to pay off all our debt years ago sure didn’t hurt, either.

“But I truly fear for our kids, and especially for our grandkids. To varying degrees they seem to understand the dangers coming down the pike, but as our freedoms wither away, that probably won’t be enough.

“I got myself dual citizenship as a backup plan for myself, but I’m not sure they see things as quite that threatening. But things that ‘could never happen here’ when I was younger now are routine. What country truly sees the US of A as the good guys anymore? What a mess!”

“Perhaps all innovation has moved into the digital realm at the expense of the old or perhaps ‘analog’ world,” muses another reader.

“Or maybe the old world of physical machines has nearly reached its potential apex, and little remains for future innovation in that old world, thus the natural transition to digital. Will we have digital car engines, aircraft or robots that break through the seemingly insurmountable physical barriers to innovation? It seems unlikely to me. We shall see.

The 5: Maybe… but then where’s our damn flying car?

Aside from that, a couple of times in recent years we’ve expressed a variation on your theme.

The longer version is here, but the shorter version goes like this: Free markets have more or less met humans’ basic physiological and safety needs — the two lower levels on Maslow’s hierarchy of needs. But we humans remain hideously stunted trying to move up the other three levels because we’re too busy feeding the insatiable demands of government.

Or in other words, where’s our damn four-hour workday that Ben Franklin promised us way back when?

P.S. It might be the biggest market opportunity of 2020.

And coronavirus has nothing to do with it — except to make this opportunity even more lucrative than it was before the outbreak.

And we do mean time-sensitive: For reasons you’ll see when you watch, this link goes dead tomorrow night at midnight.