From our lips to the mainstream’s ears: “After pushing the pause button during the coronavirus pandemic, big enterprise-technology companies later this year are expected to go on a shopping spree for smaller tech firms, industry analysts say.”

In fact, the rush is already underway: Microsoft announced on Tuesday it’s acquiring an outfit called Softomotive. Softomotive’s specialty is workplace automation — of which there will surely be more in an era of social distancing.

Says J. Neely, merger-and-acquisition specialist for the consulting firm Accenture: “For the largest players, we certainly see this immediate period as a potential opportunity to make plays to aggregate capabilities by acquiring smaller businesses that may need liquidity.”

[Ugh, too many business-school buzzwords. But you get the point.]

Other consultants see the same trend taking shape. “Gartner in April put out a guide on how tech startups can best prepare for being acquired by a larger company,” says the Journal piece.

In this new era of hunter and quarry, no hunter is bigger than Apple Inc.

As we’ve said several times in recent days, Apple had to have a very good reason to raise $8.5 billion in the corporate bond market this month… seeing as it’s already sitting on a $190 billion piggybank. “General corporate purposes” — the company’s official explanation — is meaningless.

The real explanation? The most logical one is the one our Zach Scheidt has been pounding the table about: Apple is about to launch a takeover spree.

And as you can see, the mainstream is starting to catch on… which means the window for potential profit opportunities is closing fast.

Simply put, you want to be positioned in the right takeover targets before Apple makes any announcements. And while we can’t make any guarantees about who the right targets are… Zach has identified the most likely candidates using a proprietary indicator with a sterling track record.

Zach put it all together on Tuesday during a confidential Zoom call. We made a replay link available right away. We told you yesterday that we’d pull the replay offline tonight at midnight because there was no telling when Apple might make a big move. Now that major financial media outlets are latching onto the theme, there’s no time to waste.

There’s a running theme through the day’s economic numbers — horrendous but improving. 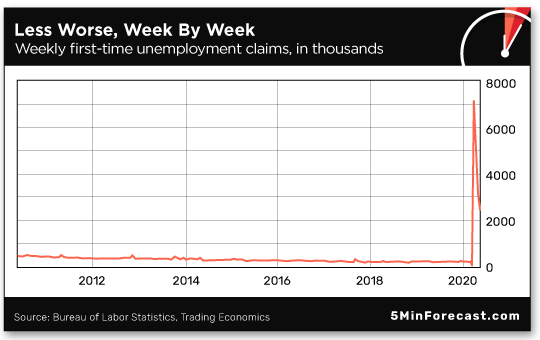 On the one hand, this week’s figure of 2.44 million is still staggering by historical proportions. On the other hand, the number’s been steadily climbing down the last seven weeks.

Then there are existing home sales — down 18% from March to April, to the lowest levels since 2011. But it’s still a seller’s market; with inventory down nearly 20% amid the pandemic, the median price of an existing home is now a record-high $286,800.

Last is the Philly Fed survey of mid-Atlantic manufacturing. Numbers below zero indicate contraction and the May number comes in at minus 43.1. But at least that’s better than April’s minus 56.6.

To the markets, where gold is getting slammed. After flirting with $1,750 only yesterday, the bid has tumbled at last check to $1,718.

That’s still higher than it was three months ago, when we were enthusing about seven-year highs. Perspective.

Meanwhile, the major U.S. stock indexes are catching their breath after a huge run-up this week. The S&P 500 is down less than half a percent as we write, to 2,958.

Crude keeps catching a bid; a barrel of West Texas Intermediate is now over $34.

Not that it was planned this way, but the pandemic is new ammunition for the people waging the war on cash.

We saw it coming in mid-March, a few days before the lockdowns began. The World Health Organization said banknotes might help spread the virus — better to use contactless payments.

Ironically, “the science” surrounding the virus’s ability to live on surfaces is changing: “Public officials and health experts have said that the risk of transferring the virus from person to person through the use of money is minimal,” reports the Associated Press.

“That hasn’t stopped businesses from refusing to accept currency, and some countries from urging citizens to stop using banknotes altogether.”

The AP assigned seven reporters on four continents to assess how the virus is changing people’s willingness to handle cash.

Of particular interest to us are Germany and Japan — where home safes were flying off the shelves a few years back so people could stash physical cash as a defense against negative interest rates at the bank.

Germans have a longstanding affinity for physical cash. As recently as four years ago, 79% of transactions were still conducted in cash.

But that might be changing, per the AP article: “According to Germany’s central bank, the Bundesbank, 43% of people have changed their payment behavior in the past few weeks; now, a large percentage are likely to make contactless payments with a card.

“Japan, for its sophisticated reputation, is also a solid believer in cash, which makes up 53% of a household’s assets, according to the Bank of Japan… But the threat of the coronavirus could be the impetus the nation needed to move toward going cashless, said Hiroki Maruyama, who heads the Fintech Association of Japan, a nonprofit that supports innovation in financial services. ‘The culture,' he says, ‘is slowly changing.’”

We’ll raise the same uncomfortable question we did when the WHO was issuing its “Ooh, icky cash!” warning in mid-March: How is a cashless society supposed to work when the authorities decide to shut down the internet and cellphone networks? We still don’t have any answers, but we assure you it’s not a hypothetical question.

“COVID-19: You may experience very long hold times if you call — we appreciate your patience,” says the homepage of Citibank.

Fair enough, we suppose. But what gives with this?

No, that’s literally what happened for about an hour Tuesday night. Callers got the following automated prompt: “Hello, world. Weasels have eaten our phone system.” And Citi’s system had not been hacked.

“Citibank is one of many companies whose customer support numbers and automated voice-activated phone systems run on an open source tool kit called Asterisk,” according to Business Insider.

Computer engineer Jared Smith is vice president at Sangoma, a software firm that keeps Asterisk up and running. He says the weasel thing is a humorous, purposely designed error message dating back to the early 2000s: “It's used as a way of telling the caller, ‘Hey, something went wrong. Our system doesn't know how to handle it.’”

There are others: "The office has been overrun with iguanas." Also: "Try to spend your time on hold not thinking about a blue-eyed polar bear."

Just in case you ever encounter them while you’re on hold, y’know.

“I don't have a degree in economics and probably have no business pondering such complex issues,” a reader writes humbly…

“But I keep reading about the massive printing of stimulus money by the Fed that will be ‘paid for by the taxpayers’ and it just doesn't compute. Then I had an epiphany.

“So if I borrow $1 million every day for the next six months, my inability to pay that back is no more ‘impossible’ than it was after the first day. That is the situation the U.S. government is now in.

“I haven't done any math on this, but I suspect that they didn't really have the ability to pay back the debt after the first couple of trillion, so what really is the difference between a $2 trillion debt and a $102 trillion debt?

“Been reading The 5 since the early days and still look forward to it every day!”

The 5: Don’t sell yourself short. The people with the advanced degrees making all the big decisions? They were clueless in their response to the 2008 crisis, and they’re even more clueless now.

It comes back to one of the first conversations your editor had with our Jim Rickards, on a spring day in 2014.

"Don't ever think for a minute that the central bankers know what they're doing," he said. "They don't.

"And they said the same thing: 'We don't know what we're doing. This is a massive experiment. We've never done this before. We try something. If it works, maybe we do a little more; if it doesn't work, we pull it away and we'll try something else.'"

Again, that was the response to 2008. And because that’s all they know, their response to 2020 is the same — just more, bigger, faster.

So don’t think the “policymakers” are graced with a wisdom you somehow lack. Besides, the decisions they make affect you in a profoundly personal way. Don’t you deserve a say?

P.S. We’ve mentioned it for several days, and now it’s almost over — your access to what might be the biggest market opportunity of 2020.

As we mentioned above, mainstream financial media are onto the story today… which means if you don’t move soon, the opportunity might pass you by forever.

Because it’s a time-sensitive situation, our exclusive briefing will be available to watch for only a few more hours.

The link comes down tonight at midnight. Click and watch while you still can.