The gold manipulation story has more intrigue than a Tom Clancy novel (no relation, in case you’re wondering)…

Although it’s the same old story when it comes to investors piling into gold as the economic crap hits the fan, right? As a direct result: When risky stocks plummet, gold floats.

Take for example the most dispiriting month of the Panic of 2008: “The correlation between daily returns on the S&P 500 and gold was minus 41%,” says an article at Medium. 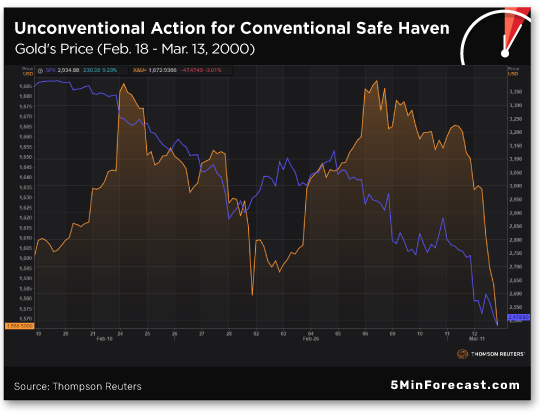 The chart above depicts the S&P 500 (blue) along with its market capitalization on the right, and the spot price of gold (outlined in yellow) is on the left side of the chart.

Medium explains: “The only periods when the S&P 500 stopped falling coincided with sharp falls in… gold which were, typically, timed just a few hours before markets closed for the weekend…

“What can explain this bizarre and a-typical behaviour of the gold price?” Medium asks. The answer? “Excessively large single trades.”

Zooming in on one date from the chart above, here’s what happened at the CME’s Comex…

In fact, a white paper — published by Paul Craig Roberts and Dave Kranzler — details this phenomenon.

Medium continues: “Normal conduct is for any large order to be broken into smaller parts, in order to minimize its impact on the market price. But these very large orders are deliberately aiming at quite the opposite effect.

“[This] type of painting the tape on Comex futures… is a manipulative act, but nevertheless it is common behavior.”

[Ed. Note: With the gold manipulation story getting even more profoundly messed up, there’s no better time to take a look at Hard Assets Alliance.

HAA leverages the power of its wholesaler network to meet demand from everyday retail customers like you right now — and at very reasonable premiums.

You’ll find all the essential details about Hard Assets Alliance at this link. Be advised that our firm bought a piece of the company last year, so we’ll collect a small cut once you fund your account. But we wouldn’t have struck that deal if we weren’t already impressed by how they take care of their customers.]

And from the front lines of the war on savers…

“Once upon a time, putting money aside for a rainy day — or even to use in the future — was considered a good thing,” says our income specialist Zach Scheidt.

“But over the past few decades, the government has moved to make saving as painful as possible,” he says.

“It started with bank interest rates — making the returns on checking and savings accounts so low that people had no choice but to put their money into riskier instruments.”

That is, if they had a prayer of keeping up with inflation, right?

“So people turned to bonds for safety,” Zach says, “until interest rates for those got too low, too.

“Some government bond rates even turned negative for a while, and President Trump is still calling for the Federal Reserve to make that official.

“If that happens, government bond investors will receive less than what they pay for them!

“That’s left dividend-paying stocks as one of the last refuges for income investors. But the war is coming for them, too.

“The list of companies that have reduced or eliminated their payouts gets longer by the day….

(To name a few… along with scads of oil companies.)

“There will be plenty of exceptions, though,” says Zach, “companies with strong businesses and steady cash flows.

“These businesses won’t have any problems sharing the success with their investors.

“The company has seen brisk business as folks figure they may as well fix stuff around the house while they’re quarantined.”

(Indeed… my husband has painted pretty much everything that’s not nailed down. And he’s sprucing up our patch of land as I write.)

“I not only expect HD’s dividends to grow,” Zach concludes, “but I expect refugees from the war on savers to notice, too. And as they buy in, the stock’s price could easily double from its current level.”

“Hotels slammed by the coronavirus pandemic are turning to a different kind of guest,” says the New York Post, “the cooped-up parent down the street.”

Household names in the hotel space — including Hilton, Sheraton and Marriott — are drumming up business any way they can after the corona-crash. Now hotel chains are cleverly enticing overworked parents looking for a private place to work (and show up for those ubiquitous Zoom calls sans distraction).

An ad for Hilton’s Cincinnati Netherland Plaza hotel, for example, says: “Need a productive office day?” The accompanying picture “features a mother rubbing her temple as her two children run amok, including one who is pounding at the mom’s open laptop.”

The hotel throws in “complimentary Wi-Fi and coffee, along with a desk in quiet comfort.” A 12-hour workday — check in at 8 a.m. and out at 8 p.m. — will set work-from-home warriors back $69.

A small price to pay for some peace and quiet? And perhaps keeping hard-hit hotels afloat…

“They are helping us to pay our bills,” says Andrew Labetti of Sheraton College Park North hotel in Maryland.

“Instead of conference-goers and tourists, the hotel… now rents rooms to about 15 area residents in need of a quiet place to do their jobs.”

The New York Post continues: “The new revenue stream is expected to continue to trickle in through the summer — even as businesses and co-working spaces… reopen.”

Jess Solomon, displaced from her Kansas City, Missouri, office, has taken advantage of a local hotel work package, saying: “I needed to focus and when you have a 1-year-old in quarantine, you can’t do that.…

“Our office is technically open now,” she says, “but I’ll probably go to the hotel again.”

And why not? An undisturbed hour at the gym… or a fully stocked minibar? Hmm… are hotels the new WeWork?

For more on the office-space exodus…

“I was talking to my boss the other day,” a reader says, “and he brought up a topic that has been stuck in my head ever since.

“With so many people currently working from home during the pandemic, surveys are showing most of them don’t want to return to the office.

“This sounds fine, but nobody seems to take the corporate bean counter’s side of this dilemma. With more people working from home, corporations will no longer need large, expensive lease spaces in city high-rises anymore.

“I don’t believe it will take very long before (if they haven’t already) bean counters see the huge cost savings in not needing real estate for workers who want to work from home anyway. I see a move away from large offices to smaller ones where people only come together occasionally.

“What is this move to smaller commercial leases going to do to the commercial market as employees mostly work from home? How long is it going to take before they start figuring out that they can cut their rents/mortgages by 50–75% by moving out of big cities?

“Once people start moving out, what about city shops and restaurants? I can see a snowball effect.

The 5: Well, if you call BlackRock’s billionaire CEO Larry Fink a “bean counter” — and we suppose most every CEO wears that no-frills more or less — then you’re onto something.

Fink said: “I don’t think any company’s going to go back to 100% of the workforce in the office. That means less congestion in cities. It means, more importantly, less need for commercial real estate. So to me that’s one of the great outcomes of this.”

Umm… not sure how to take great. As in big? Most certainly. But if your bread and butter is commercial real estate, then not great. Of course, less city congestion also means less commerce for shops, restaurants, parking garages… you name it.

The impact from the work-at-home revolution won’t just hit commercial real estate either. It’s not a stretch to think young millennial families who live in the city — chasing that elusive work-life balance — will hightail it to the ‘burbs and beyond.

According to realtor Tina Richlin, who serves rural Sullivan County in Pennsylvania, her phone’s been ringing off the hook as Philadelphians want to escape the city. One client who purchased a property sight unseen told her: “I just need to get away from all the people.”

High on the list of amenities these homebuyers are looking for? Home offices, backyards, a decent internet connection and space to grow their own food.

A new homebuyer catty-corner to me just installed a chicken coop with a brood of hens. Heh… mercifully, no rooster. Yet.

P.S. For your money, we believe the best way to invest in gold is to buy physical metal; we fully understand that can be cumbersome. Here’s the solution…

There’s no easier way to buy and hold real physical metal than Hard Assets Alliance. With a single click or toll-free phone call, you can set up an account to buy and store your precious metal — including gold, silver, platinum and palladium — in one of six audited vaults worldwide. Simply follow this link to set up an account.

To be completely transparent, Agora Financial purchased a stake in Hard Assets Alliance last year. Yes, we’ll get a cut of the fees (which are among the industry’s lowest), but we wouldn’t have made the investment if we weren’t impressed by what Hard Assets Alliance does for everyday investors who want exposure to precious metals. One more time, here’s that link.