For the second Cape Canaveral launch in a handful of days, SpaceX sent a Falcon 9 rocket into space late Wednesday night.

This time, instead of astronauts, the rocket carried 60 Starlink satellites to fill out a constellation of 482 broadband-network low-Earth-orbiting satellites. 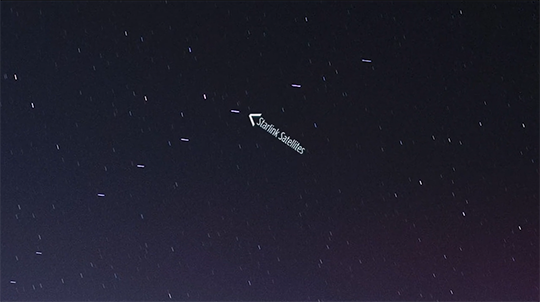 It’s still early days for Starlink… SpaceX projects a constellation of 12,000 satellites to deliver high-speed internet service around the world, especially to the most remote areas of the globe.

[Sidebar: For all you space junkies out there, the Falcon 9 used for the Starlink mission wasn’t the same one used for Saturday’s manned mission. No, this rocket’s a grizzled veteran, having gone to space four times before with other payloads. As a result, its exterior is far from pristine — scorched and weathered as it is. Something akin to these guys from the 2000 movie Space Cowboys… 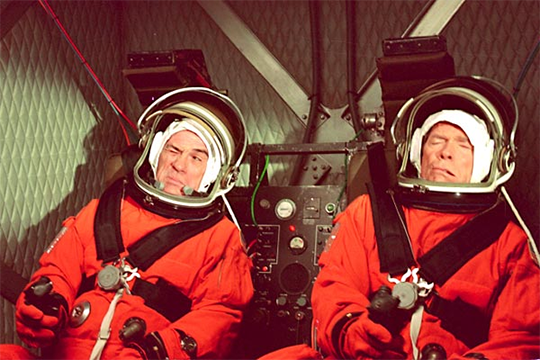 But the trusty Falcon 9 did its job and stuck the landing on the SpaceX drone ship, “Just Read the Instructions.” We suspect the primary drone ship — “Of Course I Still Love You” — was getting a little R&R after Saturday’s mission.

Personally, I hope the next drone ship is named after Elon Musk’s newborn son X Æ A-Xii… or Little X for short.]

Tesla enthusiasts even speculate Musk will build his battery-powered vehicles with Starlink connectivity.

But Musk himself curbed Tesla fanboys’ (and -girls’) enthusiasm earlier this year when he said: “It’s something that could happen in coming years, but there’s no plans to do it this year.

“The antenna… is about the size of a medium pizza,” said Musk. “You could put it on a car, but I think it’s more bandwidth than you really need.”

(While a chorus of tech-heads say, “Is there such a thing as too much bandwidth?”)

“I think in most parts of the world,” Musk continued, “we’ll just use [5G cellular connectivity], but if you’re out in the countryside and there’s not good cell connectivity, then you could connect with a Starlink antenna.”

In terms of 5G connectivity, two of our editors don’t exactly see eye to eye on the best way to capitalize on next-generation internet…

“At this point, major telecom carriers have deployed 5G connections in a few select cities. Based on the lessons they’ve learned from this process, the networks are making adjustments, buying the proper equipment and starting to set up nationwide networks in earnest.

“Just think of all the equipment that will need to be installed on cell towers around the country,” he says. (And think of the rent our 5G Cash Towers will be able to charge!)

Once 5G is widely available, consumers will want devices with 5G connectivity built in. “On that note,” says Zach, “did you realize that Apple hasn’t even launched a 5G phone yet?

“When it does, you can bet the iconic newest iPhone will sell out in moments, helping to drive Apple’s stock higher — along with the many companies that supply Apple with components.”

“As inspiring as the [SpaceX] launch was,” Ray says, “it pales in comparison to the secret space program that Apple is working on.

The patent’s essential for what Ray calls “a radical new internet — powered directly by Apple Inc.” A new internet that will be beamed down from the sky, giving customers powerful connectivity from anywhere in the world.

[If “Apple-Fi” sounds a lot like SpaceX’s Starlink program, you’re not wrong… It’s certainly a variation on a very hot theme. But here’s the catch for investors: SpaceX is a privately held company… and if Elon Musk has anything to say about it, SpaceX will stay that way. Apple (NASDAQ: AAPL), on the other hand, is now a veteran technology stock stalwart. You get the idea.]

Ray can tell you all the details about this new technology and the many investment opportunities that will skyrocket once Apple’s plans are announced later this month.

So you’ll need to act quickly, because Ray suspects Apple will unveil its new project on June 22 when the company hosts its Worldwide Developers Conference.

If you wait until after the announcement, the Apple-Fi opportunities will already be on the move and you’ll miss out on the biggest early profits…

That’s why we’re recommending you access Ray’s presentation TODAY so you have time to act before his groundbreaking research is made public to everyone else.

As for Zach’s and Ray’s difference of opinions, there’s no reason you can’t profit from a couple 5G angles. In fact, that’s what being a smart investor is all about.

According to the U.S. Department of Labor, another 1.9 million Americans filed for unemployment last week.

If you’re keeping score, that brings total jobless claims since mid-March quarantining to a wretched 42.6 million… 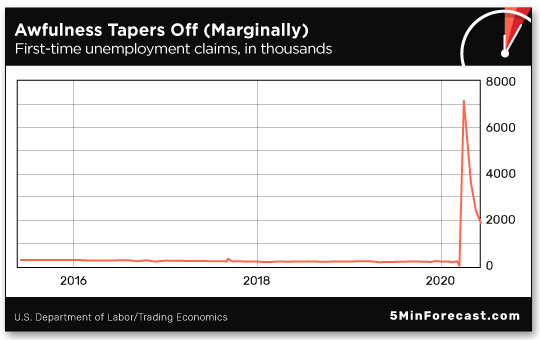 If there is a silver lining, last week’s number is down from the week before when first-time unemployment claims clocked in at 2.1 million. Yay?

“Another day, another strong rally in the markets,” says Greg.

“Some of the forgotten names that have been left behind by the recovery rally took charge, and the Dow led the way higher with a 2% gain (thanks to beaten-down stocks like Boeing that rallied double digits).

“The rally in the stock market since mid-March has surprised many,” says former Wall Street banker Nomi Prins, “and small-cap stocks have been the biggest winners thus far.

“But that could be changing as we move into the summer months,” she says, while drawing our attention to an article at MarketWatch today.

According to the article: “The Russell 2000 index, which tracks the performance of small-cap stocks, rose 20.9% during April and May, its largest two-month percentage gain since 2009 and its best two-month relative performance to the S&P 500 index since February of last year.”

“The relative performance of small-cap stocks has also coincided with a general rotation into cyclical sectors, including financials and consumer-discretionary stocks… which compose a larger share of the Russell 2000 than the S&P 500,” MarketWatch says.

But small caps are in peril, Nomi says. “Here’s what analysts are worried about,” she says. “The program that is providing unemployed Americans with an extra $600 per week along with their regular benefits is ending next month.

“Many of these small-cap stocks are directly affected by spending by Americans,” she says. “If this spending dries up,” Nomi concludes, “it could be the start of a retreat for small caps.”

If you have an extra $15 million lolling about, why not make an offer on the Brasher Doubloon (aka the first gold coin struck in the U.S.)?

“The doubloon is dated 1787,” says Bloomberg, “the same year the Constitution was written and five years before the federal mint opened in Philadelphia.

“Metalsmith Ephraim Brasher, George Washington’s next-door neighbor on New York’s Cherry Street, privately minted a small batch of the coins and punched this unique version with his hallmark ‘EB’ on the eagle’s breast.” 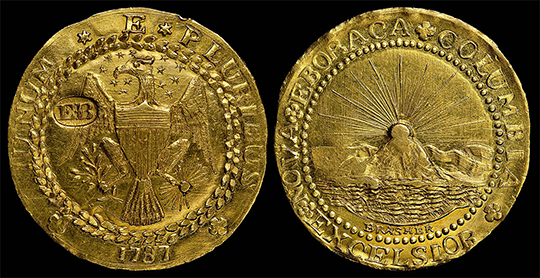 And according to numismatist John Albanese, GW himself almost certainly handled the coin. “If you talk to coin nerds and old-time experts, I’m guessing they’d all say the Brasher Doubloon is the greatest coin ever because of the history.”

Bloomberg says: “Los Angeles-based PCAG Inc. is marketing the coin on behalf of a collector… [identified] as a former Wall Street executive.”

A reader writes: “The main perpetrators of our out-of-control government are the Fortune 500 lobbyists, who tell our congresspeople: ‘If you don't vote the way we tell you, we'll pay to get your opponent elected to take your job.’

“One example: That's how lobbyists — paid by enormous construction outfits who wanted to build federal prisons — convinced those in Congress to vote for ‘mandatory minimum sentencing’ for possession of miniscule amounts of marijuana. Otherwise, during the election cycle, candidates would be tarred as being ‘soft on crime.’

“The result was judges who couldn't use their own discretion when sentencing those arrested, charged and convicted… also resulting in Congress voting for building dozens more federal prisons.

“This is why the 28th Amendment effort — designed to limit congressional terms and remove lifetime benefits that only members of Congress enjoy (not to mention their not having to obey the laws they pass for the rest of Americans) — is gaining traction.

“What most Americans don’t know is amendments to the Constitution can be enacted by a popular vote in an emergency constitutional convention; Congress doesn't have the only power to pass amendments.

“All that needs to happen is for at least 35 states to ratify a call for a constitutional convention to pass a 28th Amendment restricting congresspersons from getting more than one term in office, no retirement benefits they currently enjoy and no exemptions from any laws that pertain to all Americans.”

The 5: We’re all for term limits; we think they’d go a long way toward tamping down that gem of an oxymoron: crony capitalism.

It doesn’t matter if you're a veteran trader like Alan or a beginner… as long as you know what to do during the 60-second window. If done right? You might even DOUBLE your money — or more — within a month.

To get your shot to profit just like top Wall Street traders click here… Alan shows how it’s done.