Champagne Finance on a Beer Budget

The U.S. ceded seven spots in a ranking of the world’s most competitive economies in 2020.

According to an annual ranking from Swiss business school Institute for Management Development, the U.S. dropped from third to 10th place… 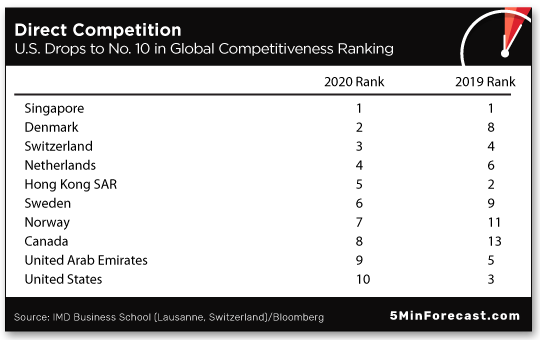 The IMD’s annual ranking that kicked off in 1989 evaluates 63 economies in line with multiple data points including cost of living, unemployment and government spending. “Soft data” is also gathered from business execs concerning issues such as intellectual property protection and political instability.

Per the downfall of American economic competitiveness — from numero uno in 2018 to 10th place in just two years — the IMD says: “Trade wars have damaged both China and the USA’s economies, reversing their positive growth trajectories.”

Of course the U.S.-China trade war is the bogeyman that’s spooked the stock market, if not the actual economy, since Trump took office. So we’d say take your pick: unemployment, government (over)spending, political instability? Like shooting fish in a barrel… Did we mention a freaking pandemic?

And all these variables are playing out in Silicon Valley too…

“In early 2020, even before the coronavirus pandemic, venture capital was having a rough go,” says former hedge fund manager and venture capitalist James Altucher.

“A series of disappointing IPOs in 2019 set the stage for the reckoning early this year,” he says. Yeah, we’re looking at you Uber, Lyft, SmileDirectClub, not to mention the much-hyped IPO that never was — WeWork, once valued at a stupefying $47 billion. Today? WeWork’s valued at — we think — a generous $3 billion.

By February, startup layoffs were endemic, and that was pre-pandemic.

“Since the start of the pandemic,” James says, “VC firms have been focusing more on their existing portfolio companies than ever before.

“Based on my conversations with several fund managers, top VCs have been busy helping portfolio companies restructure to survive the changing business landscape,” he says. “These VCs are now more concerned with saving their existing investments than writing checks for new companies.”

According to data firm PitchBook, venture capital investment dropped off 43% in April compared with April 2019. And The Boston Globe says: “Venture capital funding has all but seized up completely. Almost no one is taking even virtual meetings with startups, except for the VC firms that have already invested with them.”

“However,” James says, “venture capital’s loss could be Main Street’s gain.” He notes how Silicon Valley’s mostly swatted away crowdfunding — small amounts of capital from a large number of investors.

That’s because for over a decade, bull-market easy money flowed into Silicon Valley, “meaning VC firms had more money than ever to chase the most promising startups with the best possible terms,” James says. Er… those days are in the rearview mirror.

“Name-brand companies are now being forced to consider crowdfunding,” James says. Helped along by an unlikely source…

James says: “As the economic shutdown has left businesses in desperate need of investment, regulators have been quick to respond.”

Indeed, the SEC has temporarily cut some red tape concerning crowdfunding. According to legal firm Morgan Lewis: “On May 4 [the SEC] announced temporary relief for companies affected by the coronavirus (COVID-19) pandemic seeking to raise capital in the public market pursuant to Regulation Crowdfunding (Regulation CF).

“In general, Regulation CF allows an issuer to raise up to $1.07 million in a 12-month period by selling securities to the public through an SEC-registered intermediary, such as an online funding portal.”

(A tad dense… but lawyers, right?)

To James’ way of thinking, the SEC’s relaxed rules mean: “It essentially eliminates the process of hiring expensive accountants prior to fundraising” — business expenses that would "ultimately come out of their investors’ pockets.”

Plus, the money startups save can be put to better use — think marketing, hiring new employees, R&D and more.

“Right now,” James says, “there are more startups looking for investment than there are VC or angel investment dollars in the world.”

And competition is stiff when it comes to the venture-capital dollars that are available. For cash-strapped startups, it’s akin to making a deal with the devil. James says: “Faced with the option of either selling stock to VCs at a 40% discount or on crowdfunding websites at a 20% discount, many startup founders would choose the latter.

“For crowdfunding investors,” says James, “this represents perhaps the best possible scenario in the current climate. [And] the lasting impact of the coronavirus will likely leave a [positive] impression on crowdfunding and venture capital for years to come.”

One caveat: “Like stocks, the best crowdfunding deals require careful consideration and research.” But James’ team is on it… not to mention James brings years of VC insight and experience to the table.

So “with businesses… starved for capital in the wake of economic shutdown,” James concludes, “crowdfunding seems to finally be coming of age.”

[Ed. note: James and his team will keep an eye on crowdfunding opportunities in the weeks and months to come, but right now he’s keen to clue you in on something he’s discovered…

Something that will transform the way you invest in this extremely volatile market.

It’s crucial you catch his latest update about life and making money in a post-coronavirus world.

James reveals exactly what readers should be doing to help protect their money and how they can even profit from his latest discovery.

Take a look while you can… this offer goes away WEDNESDAY morning at 9:30 EST.]

Early this morning, we caught sight of this goofball… 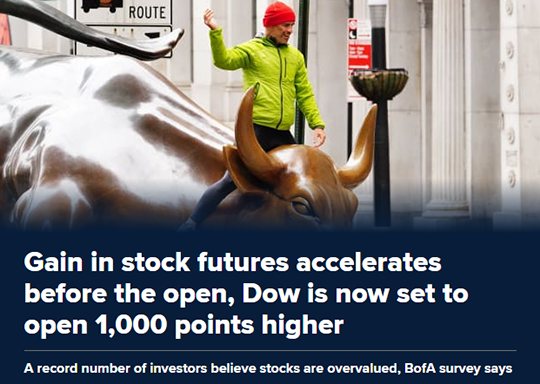 Notice the cognitive dissonance between the headline and the fine print beneath… heh.

Hmm… Might the Fed’s corporate bond buying be the catalyst for the market recovery today?

Well, yeah. That’s according to a harried-looking Fed Chair Jerome Powell who said this during his twice-yearly congressional sitdown: “[Corporate bond buying] is out of an excess of caution to preserve these gains for market function by following through.”

And this gem: “I don’t see us wanting to run through the bond market like an elephant snuffing out price signals, things like that.”

We bring you a flotilla of economic numbers today… and it’s a mixed bag.

Overall, seems as if gummint checks have done a lot to juice consumption… but gummint/Fed bailouts have done little to stimulate production. ’Murica?

“In the middle of a severe recession, the California state government is doing what it does best: raising taxes,” says an article at Reason.

(If we seem to be picking on Cali — Dave reported on plagued CalPERS yesterday — we apologize, but…)

We wonder where the gas taxes are going, considering the Golden State’s legendarily bad state highway system. No matter. “On July 1, the state's motor fuel excise tax will rise by 3.2 cents to 50.5 cents a gallon. That heavily regressive levy secures the Golden State's status as the nation's top taxer of gasoline.”

According to The Los Angeles Times this is the third tax hike in four years, and the first resulting from an inflation-adjustment tool implemented in 2017. “That law requires that every July, beginning this year, the state's gas tax rate be adjusted to match any change in overall consumer prices, as measured by the California Consumer Price Index (CPI).”

Even though California CPI “shows an overall decline in prices between February and April 2020,” Reason reports, “the data the state relies on to calculate its gas taxes are coming from rosier times.” More specifically, data was drawn from the pre-pandemic, bull market days of November 2017 to November 2019.

Sucks to be a Californian… But is relief in sight?

California State Assemblymember Marie Waldron says: "Unemployment continues to rise and all the ways California was unaffordable prior to the pandemic still exist — suspending the gas tax increase is the least that could be done.”

Yep, the Fight Club-loving financial news site that Twitter “de-platformed” in late January — a move Dave challenged at The 5 — has been relisted on the social media site.

And did we say “little fanfare” before? Well, not for Zero Hedge’s 700,000-plus zealous fans who were all too happy to fill in the months since ZH was absent from Twitter… 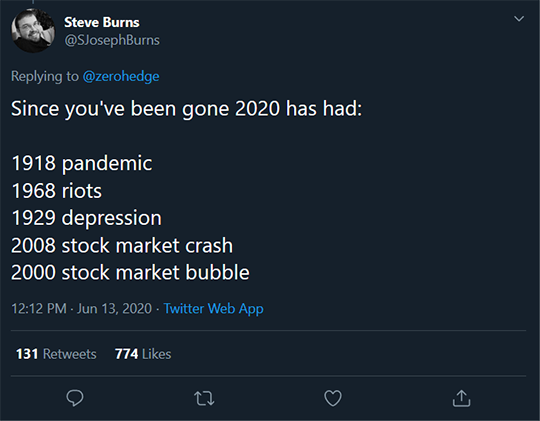