The president must be flattered that Bloomberg News has a dedicated page on its website, constantly updated, where…

But it’s his tweets about specific companies that have our attention this morning.

“Imagine being in the crosshairs of a Trump tweet,” says our chart hound and market-sentiment tracker Greg Guenthner.

“The fallout from the president’s public criticism could be immeasurable, with his horde of nearly 60 million followers piling on.

“On the flip side, Trump’s praise might make you famous or save your business from destruction, bringing you riches you never dreamed possible.”

Or so you’d think. Reality is much more interesting.

Greg reminds us that a while back, money manager and Bloomberg columnist Barry Ritholtz sought to track the long-term impact of Trump tweets on a company’s share price.

“We created a pair of indexes and tracked them for a year,” Ritholtz wrote.

“The Oligarch (companies he favored) and the Drain the Swamp (companies he denigrated) indexes were filled with companies straight from the feed of the tweeter in chief. This allowed us to track how well or poorly they did relative to their relationship with the president. What impact would he have on the companies’ market performance?”

Go figure: In 2017, the companies trashed by the president stomped the ones he praised. Ditto for 2018. 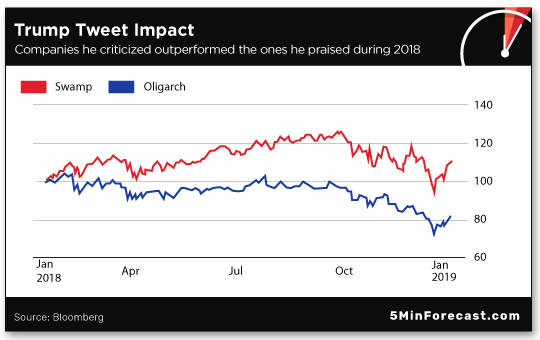 Near as we can tell, Mr. Ritholtz did not repeat the exercise for 2019.

But a casual web search turns up no fewer than three academic papers exploring the same question. Without getting too deep in the weeds, the findings are either inconclusive or they line up with the Ritholtz-Bloomberg research.

“These results go to show that social media can have a huge impact on the market. But not always in the way you’d expect,” Greg goes on.

“Every second, around 6,000 tweets are posted to Twitter. Obviously, a tiny fraction of those are about stocks. And an even smaller fraction are useful.”

In an all-out effort to separate signal from noise, Greg and colleagues developed a tool called SERINA — short for “Sentiment Recognition and Interpretation Algorithm.”

“The system we’ve built is a direct feed from social media companies’ servers,” he explains — “but it’s designed to only capture meaningful posts. The other 99.9% of the noise is ignored.

“And while SERINA began waving the caution flag back in January, she’s been much more opportunistic in recent weeks,” Greg continues, “pointing to an increasing number of buy signals.

“As long as sentiment continues to be lopsided in favor of bulls, it makes sense to stay active in this market. Tech stocks in particular continue to show the strongest bullish bias right now – they’re likely to keep on leading things higher.”

Greg’s publisher explains how the system works when you click here. Please note this service is open to new members only through midnight tomorrow night.

At last check, the Dow is barely in the green. The S&P 500 is doing slightly better, inching above the 3,100 level; our Alan Knuckman says a brisk “test-and-reject” of the 3,000 level last week was a good sign.

But it’s the tech-heavy Nasdaq up strongest today — about four-tenths of a percent at 9,988. The biggest of the bigs, Apple and Microsoft, are both up more than 1%.

Gold zoomed higher as soon as trading opened on the Comex this morning. As we write, the bid is up to $1,760 — testing a seven-year high. Crude is within a few cents of $40 a barrel.

As you might have heard, the president fired U.S. Attorney Geoffrey Berman over the weekend. It was a bit messier than that, actually; Berman first learned of his “resignation” Friday night from a Justice Department press release and he refused to go quietly.

The petty partisan howling came right on cue. USA Today: “Lawmakers on Sunday continued to raise questions about the sudden removal of the prosecutor who oversaw the prosecution of Trump's former personal lawyer, Michael Cohen, and who also is managing investigations of the president's current lawyer, Rudy Giuliani, along with two of Giuliani's former business associates.”

Named as Berman’s replacement was Jay Clayton — currently the chairman of the Securities and Exchange Commission, or, as newsletter legend Doug Casey has long called it, the “Swindlers Encouragement Commission.”

Clayton notably lacks any experience as a prosecutor.

“What Clayton does have is a lot of experience representing Wall Street’s largest banks, like Goldman Sachs and JPMorgan Chase, both of whom are currently under intense criminal investigations by the Justice Department,” write Pam Martens and Russ Martens at Wall Street on Parade.

“Clayton was a former partner at Wall Street’s go-to law firm, Sullivan & Cromwell, which is currently representing Goldman in the criminal case and representing JPMorgan in various matters…

“JPMorgan Chase had multiple traders from its precious metals desk indicted by the Justice Department on RICO charges last year for allegedly running a racketeering enterprise out of the precious metals desk at JPMorgan. The firm itself is now under criminal investigation according to a February report at Bloomberg News.”

Clayton’s appointment needs Senate confirmation, which is not a sure thing given the circumstances of Berman’s departure. Then again, Democrats had no problem with Obama’s attorney general Eric Holder carrying Wall Street’s water for years, so Clayton’s past should prove no obstacle at all.

We have a weather warning for D.C. —– swamp water rising fast.

The great Chinese growth engine is slowing down — not because of coronavirus but because of the leadership in Beijing.

So says our resident futurist George Gilder, who’s long been a China bull. Still is, but now there are some caveats. “We see the revanchist tendencies in the Chinese government as a negative for Chinese GDP growth.

“From the early 1990s through 2008, a major factor in China’s growth was the reform of state-owned enterprises, which increasingly behaved like competitive private firms. They shed waste, cut payrolls, become more responsive to customers and responded to competition from millions of new private competitors. The government was less and less inclined to subsidize failure.

“In the wake of the 2008 crash, these reforms began to be reversed. Government poured massive amounts of capital into the state-owned firms to keep them solvent and their workers employed.

“Unfortunately, the new subsidies became permanent policy. Capital allocation in China today is much less efficient than 10 years ago; state companies control vastly more assets and their return on assets has plunged to pitiful levels.”

Mr. Gilder and his team are working on a white paper exploring the political risk of investing in China for readers of his entry-level newsletter, The George Gilder Report.

A matter we described nearly four years ago as “regulators gone wild” is now a case of “litigation gone wild.”

Under the law, actors can ask IMDb and other movie websites to delete birth dates and ages — on the theory that some people who consult those sites might be potential employers in Hollywood, who then might perform acts of age discrimination.

IMDb fought back in court. On Friday, a three-judge panel of the federal Ninth Circuit Court of Appeals unanimously struck down the law — citing First Amendment grounds. “An unconstitutional statute that could achieve positive societal results is nonetheless unconstitutional,” said the opinion.

The story’s still not over: The Screen Actors Guild, which pursued the case along with the state of California, is deciding whether to appeal to the full Ninth Circuit.

Don’t be surprised if the union keeps pressing: Its current president is Gabrielle Carteris — who at age 29 was cast as a teenager on Beverly Hills 90210. 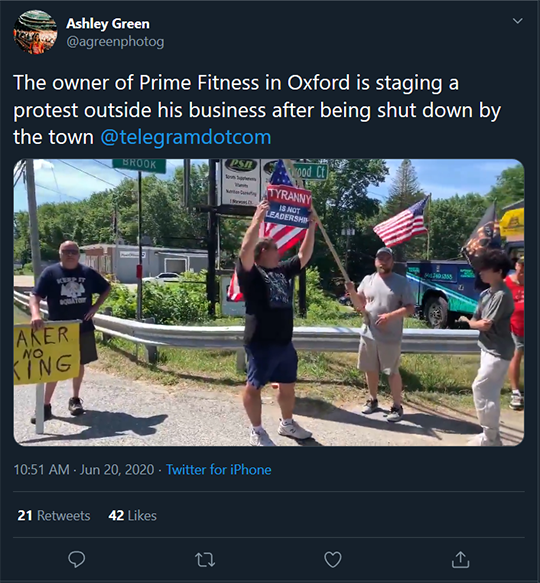 On Friday we told you how a gym in Oxford, Massachusetts, called Prime Fitness reopened last month in defiance of the Republican governor’s stay-home orders. Last week, town fathers convinced a judge to shut off the gym’s power and water.

On Saturday, owner Dave Blondin convinced some of his clients and friends to come out in protest. “The town of Oxford is frustrated,” he told the Boston Herald, decked out in a T-shirt declaring, “My governor is an idiot.”

As one supporter told Boston’s CBS station, “I believe that businesses, if they can handle separation and keeping the space safe for people, that there’s no reason to hold off.”

It turns out Blondin only rents the building. It was the building’s owner who cooperated with the utility shutoffs, according to an attorney for the town. To be continued…

Well, it was probably inevitable… 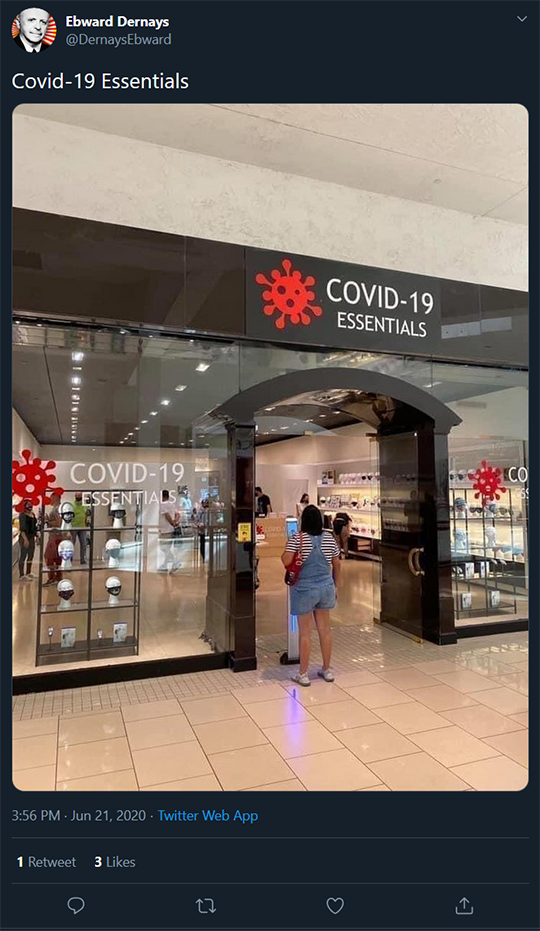 “Anything that’s COVID-19 related, we have it,” says Nadav Benimetzky of the “COVID-19 Essentials” store, located on the second floor of the Aventura Mall in Aventura, Florida.

“The demand was there,” he tells Miami’s WSVN-TV. “Everybody was kind of looking for masks and sanitizers and anything to do with COVID.”

You name it, they’ve got it — infrared thermometers, noncontact door openers, phone sterilizers, hand sanitizers. And plenty of masks you can customize. “Everyone wants to express their own fashion, and we’re here to really customize the mask, A to Z.”

The TV station found a customer who was way too enthusiastic. “I’ve never seen something like it. I was excited when I saw it. Then I start to see myself, and I say, ‘Wow! Oh my God, oh my God!’ I was excited about it.”

The Twitter reactions are far more amusing than the TV piece…

What if you could harness social media’s market-moving potential — zeroing in on the handful of relevant posts with the potential to deliver you a windfall?

There’s a system to help you do just that. See how it works at this link. Check it out now, because the link goes dead tomorrow night at midnight.