That’s it. We just reached peak insanity, even by 2020 levels.

And we’re not even talking about Tesla now having the biggest market cap of any automaker in the world. (As of yesterday, it topped Toyota.)

No, we’re talking about this… 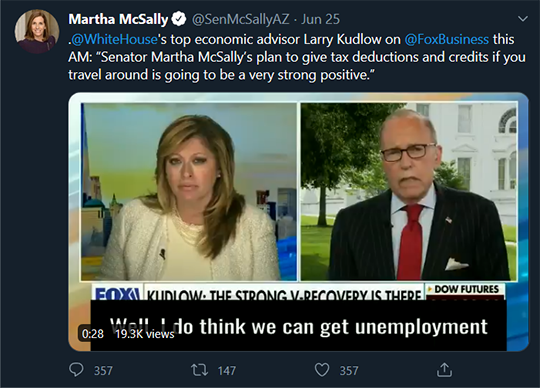 Somehow it escaped our attention last week… but the White House has given its blessing to a proposal called the American TRIP Act. (TRIP stands for “Tax Rebate and Incentive Program” because of course.)

Should it become law, you can claim a tax credit for taking a vacation — this year, next year and the year after that — supposedly to give the ailing tourist trade a lift.

Individual filers could claim up to $4,000. Couples could claim $8,000. Plus another $500 for each dependent child. Any trip more than 50 miles from home would qualify.

Look, we have no problem with anything to reduce Americans’ tax burden. But c’mon!

For weeks, Republicans have accurately pointed out how millions of people are collecting more money on unemployment than they did with the dead-end jobs they had before the corona-crud began stalking the land.

Now these same Republicans want to… well, they want to reward you for sloth, right?

(Sheesh, and people thought it was tacky when Bush 43 urged us all to fight terrorism by going to Disney World….)

Then again, when they’ve blown a hole in the federal budget as big as it is now, a vacation tax credit is chump change.

Behold: For the first eight months of fiscal 2020, the federal government is $1.88 trillion in the red.

The previous record for a full-year budget deficit is $1.4 trillion in 2009.

When Uncle Sam goes on a spending binge, and the value of a dollar looks ever more shaky, gold is a sensible refuge.

Of course, historical analogues are never a good investing thesis. So Jim Rickards joins us today with four reasons gold is set to soar.

“Here are the Fab Four signs that gold will break out to the upside:

“That higher commission is not the result of dealer greed. It’s the result of scarcity and the dealer’s efforts to balance supply and demand.

“What it really means is that the real price of gold is closer to $1,850 per ounce once the excess commission is added to the spot price. When it comes to gold prices, forget New York and London. Real prices are already higher than you know.”

At least supplies aren’t as tight as they were three months ago, when financial websites like MarketWatch were chock-a-block with headlines like “‘There Is No Gold.’ Bullion Dealers Sell out in Panic Buying.”

If you don’t have your full gold allocation by now — Jim recommends 10% of your investable assets — now’s the time to act.

You know our favorite method for putting real metal into your portfolio — Hard Assets Alliance. And you know the disclaimer by now — we’ll collect a small cut once you fund your account. And you also know why we bought a piece of the company — because of how well they’ve treated retail metals customers, including our own readers.

To the June job numbers — which are terrific if you use the extremely low bar set by previous months.

The wonks at the Bureau of Labor Statistics conjured 4.8 million new (or revived) jobs for June. On the big chart of all the job losses from all the recessions since World War II, the proverbial “V-shaped recovery” remains intact — but with a hellacious amount of ground still to make up. 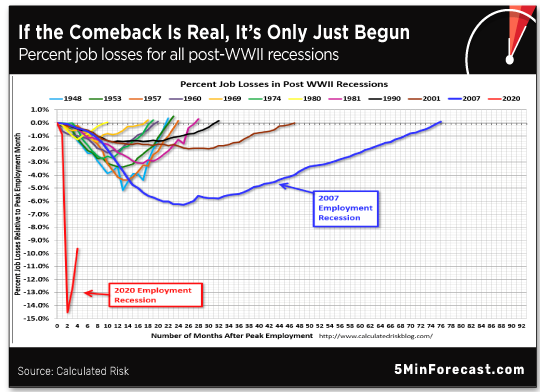 More telling, perhaps, are the two numbers that are harder for the government statisticians to game. 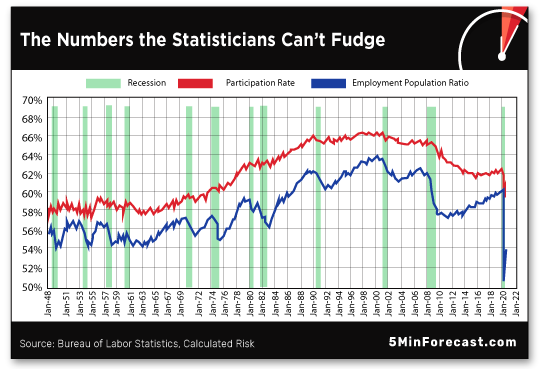 The red line is the labor force participation rate — the percentage of the working-age population that’s either working or looking for work. The number is recovering, but remains at early-1970s levels when women were first entering the workforce en masse.

And the employment-population ratio — literally the percentage of the total population that’s working — is also recovering, but it remains appallingly low by post-WWII standards.

The major stock indexes ripped higher upon the release of the job numbers… and then pulled back.

Yes, the numbers were better than expected. But with the “resurgence” of the virus, Apple is once again closing stores and McDonald’s is pausing its reopening of dine-in service.

Going into the holiday weekend, it seems a lot of American expats would like to declare their independence — from the IRS.

An outfit called Greenback Expat Tax Services conducted a survey of more than 4,000 Americans abroad from March through June. Seven out of 10 believe it’s unfair that they must file U.S. taxes.

We’re not surprised. As we’ve chronicled for nearly a decade now, the United States is the only developed nation that expects its citizens overseas to pony up taxes on income earned overseas. Compliance costs run about $2,000 a year, even on a modest salary.

The survey reveals one in five “seriously considering giving up their citizenship in the near term,” writes financial planner Darla Mercado at CNBC’s website.

The system “continues to be a thorn in the side for these individuals,” says Greenback’s Miranda Pruitt. “It remains something they struggle with, the extra reporting requirements and forms they have to fill out at tax time.”

In the first quarter of 2020, a total of 2,909 Americans surrendered their citizenship to get out from under the IRS’ thumb.

That’s a record for a single quarter… although it looks to us as though a lot of those renunciations were first processed in late 2018. The overall pace is still slower than it was a few years ago. The second-quarter figures are due sometime in August. We’ll be keeping an eye out.

“Taxes are the single most expensive ingredient in beer,” according to the Beer Institute — “costing more than the labor and raw materials combined.”

If you plan to crack open a brew or three this weekend, you might be interested to know that on average, 40% of the retail price covers one tax or another.

Again, that’s an average. State by state, beer taxes vary widely. Going into the holiday weekend, the good folks at the Tax Foundation graced us with another one of their most excellent maps… 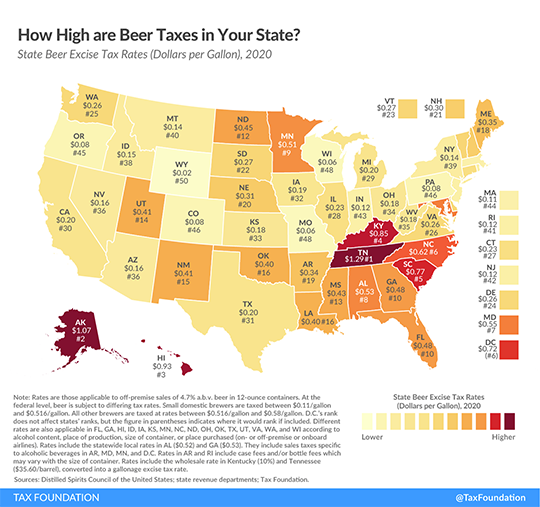 Your lowest beer taxes are to be had in Wyoming, followed by Missouri and Wisconsin in a second-place tie. (Drink Wisconsinably!)

Highest in these United States is Tennessee, followed by Alaska — where for most folks, cheaper suds across the state line can’t be had. Sneaky, huh?

“I have been reading The 5 Min. Forecast for a while now and must admit I am a newbie to investing,” writes a reader who we suspect is not alone.

“I have never had a brokerage account or done any investing outside my employer-provided retirement account, over which I had no say.

“Is there an account without major fees? If so, how do I go about setting one up? What are the requirements and what questions should I be asking?

“I will have to start small and hope to reinvest earnings.”

The 5: In a way, there’s no better time to get started — because within the last nine months or so, all the major brokerages have done away with commissions on regular stock and ETF trades.

What’s the catch, you wonder? Well, as we’ve documented before, if you keep uninvested cash in your account, the brokerage will plow that money into some sort of short-term fixed-income instrument… and keep nearly all the accrued interest for itself. (There’s a workaround, though.)

In any event, nearly all of our entry-level newsletters include a special report for new subscribers about how to choose a brokerage firm. If that report is hopelessly lost in a cluttered inbox, call or email our friendly U.S.-based customer care folks and they’ll be happy to resend. Here’s an email link or you can call 1-800-708-1020.

P.S. Although Saturday is Independence Day, U.S. markets are closed tomorrow to create a three-day weekend.

With markets closed, we won’t publish tomorrow… but we’re back Saturday with our usual wrap-up, 5 Things You Need to Know. The weekday edition of The 5 returns Monday.