The Haves and Have-Nots

After a prolonged dry spell, Uncle Warren’s landed on a way to spend Berkshire Hathaway’s billions.

On Sunday, Duke Energy and Dominion Energy scrapped plans for the $8 billion Atlantic Coast Pipeline, a project to move natural gas 600 miles through West Virginia, Virginia and North Carolina… that would also undercut the Appalachian Trail.

Dominion further announced it was selling out. At least partially. In a $9.7 billion deal, Berkshire Hathaway will purchase a portion of Dominion’s natural gas conveyance and storage grid. Also included in the buyout? Almost $6 billion of Dominion’s debt. 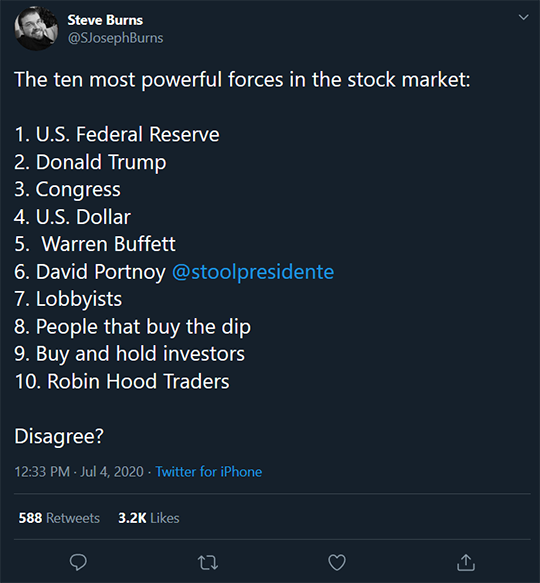 Umm… Barstool Sports' Dave Portnoy (and Johnny-come-lately day trader) must be peeved Buffett’s name is listed above his.

As for market movers, our buyout authority Zach Scheidt shares his thoughts on the market as we warily embark on the second half of 2020.

“One of the questions I’m getting,” says Zach, “is how can the market be so strong when the economy is so weak?’” Also a theme at The 5 since the corona-crash…

Zach notes: “Low interest rates… the Fed's policy of buying corporate bonds… the $1,200 stimulus checks many Americans received… and a generous $600 per week in extra unemployment benefits all helped put cash back into the market.” (Nos. 1–4 on the tweet above, in other words.)

And with social distancing still in place to one degree or another, Zach says Americans have fewer outlets for that cash. Nightlife? Gone. Travel? Obliterated. What are bored Americans to do? (Correction: bored and generally employed Americans.)

Zach argues some Americans are channeling stimulus cash into the stock market: “It certainly helps that new apps like Robinhood are making it easier for new investors to get involved in the market and start buying shares of stock for the first time.”

A trend Zach expects will continue when D.C. agrees on a second round of stimulus — an inevitability when you take into account 2020 elections. “You can bet that keeping the stimulus payments flowing will be a popular decision on both sides of the aisle.

“It’s clear that this extra cash… to both corporations and individuals is propping up the market and, in some cases sending stocks to new highs.”

Zach continues: “Thanks to lower interest rates and the Fed that’s actively buying corporate bonds, many U.S. companies have access to billions of dollars of cheap capital.

“Take Apple Inc. (AAPL), for instance,” he says. “The company recently sold $8.5 billion worth of bonds, essentially borrowing billions of dollars on top of more than $180 billion in cash that the company already holds.”

Another FAANG company — Amazon — followed Apple’s lead, further amassing an enviable war chest. Zach says: “There are plenty of other big blue chip companies that are currently sitting on tens — if not hundreds — of billions in cash.”

So what are companies to do with literal trillions of “dry powder”?

“But this opens up an opportunity for companies with plenty of cash to come in and buy out the companies under pressure,” says Zach. “These buyout deals can be extremely lucrative for investors. Once a buyout deal is announced, shares of stock for the company being bought typically skyrocket overnight.

“If you're invested in this stock before the announcement is made,” Zach says, “you can walk away with a huge overnight profit.”

And another way to hedge your retirement savings from inflation…

“It's natural to be concerned about the dangers of inflation,” Zach says. “Inflation can cause your nest egg to lose value just because it takes more dollars to buy the goods and services you need for retirement.

“That's the bad side of inflation,” says Zach. “And if you're unprepared for it, inflation can seriously hurt your plans.”

But if you’re proactive rather than passive, Zach says: “In today's market, inflation is helping to push stock prices higher. And that will continue to happen as the government pumps more money into our financial system.

Once the indicator spikes for a particular stock, Zach and his team dive in to see what kind of buyout deal’s in the works… and how to set up a trade to profit from a buyout announcement.

And with some of Wall Street’s strongest companies holding massive cash reserves, Zach expects a multitude of lucrative buyout deals in the second half of 2020.

So if you do anything today, make sure you watch this video where you can access details about market-moving opportunities. But this message is scheduled to come offline at MIDNIGHT.]

According to CBOE trading veteran Alan Knuckman: “Wall Street just wrapped up its best quarter in decades, with the Dow, S&P 500 and Nasdaq all sprinting to the finish line last month.”

Alan continues: “The good news is now starting to pile up as stocks push higher.

“Pfizer announced positive results from a COVID-19 vaccine trial. Then we were treated to a record jobs gain, with 4.8 million workers added to payrolls in June. That dropped the unemployment number close to 11%.

“Is the world perfect?” Alan asks. “Absolutely not. But the market is taking its cues from the positive headlines right now.” Refreshing, no?

And gold’s catching some of that optimistic momentum too…

“A key breakout has put gold on track to make a run toward its all-time highs,” says chart-loving analyst Greg Guenthner.

“When we last wrote about bullish moves in the precious metals space back in May, gold was beginning to emerge from its orderly consolidation, retaking $1,750 and setting up for further upside. 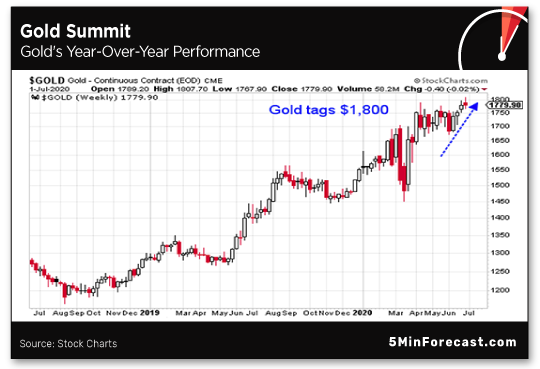 “As I’ve said many times this year,” says Greg, “I don’t think the gold trade is going away. Trading opportunities in the bigger players and even the speculative miners will give you plenty of chances to book serious gains in the weeks and months ahead.

“Don’t be surprised if gold makes a move toward $2,000 before the end of summer.”

For the key economic number of the day, the Institute for Supply Management manufacturing survey shows 52.6% of companies report their businesses are growing. An upside surprise, to be sure — that beat analysts’ expectation of 49.5% — and up from May’s 43.1%.

“Demand, consumption and inputs are reaching parity and are positioned for a demand-driven expansion cycle as we enter the second half of the year.”

Americans aren’t the only one stashing cash: “Households across the world have been saving up since the coronavirus pandemic hit the global economy,” the Financial Times reports.

“It is not clear whether the money represents pent-up consumer demand that is itching to be spent as lockdowns are lifted, known as involuntary saving,” the article continues, “or a safety net put aside by households to insure against uncertain times ahead, referred to as precautionary saving.”

Jim Rickards, for one, believes most savers fall into the too-scared-to-spend — or precautionary — category as household savings rates in the eurozone and the U.K. saw upticks for the first three months of 2020, to 16.9% and 8.6%, respectively, over the same period last year.

The FT says: “In the U.S., the personal savings rate surged from 7.9% at the start of the year to more than 32% in April, before dropping back somewhat to 23.2% in May, according to the Bureau of Economic Analysis.”

And poor central banks *world’s tiniest violin*: The widespread “cash stash poses a dilemma for policymakers as they try to gauge the amount of stimulus needed to fuel a return to growth.”

“Fido could be the next member of your household to benefit from the increasing adoption of cannabis,” says our pot stock authority Ray Blanco.

“Just like the human therapeutics being developed with cannabinoids, veterinary medicine is seeing a surge in the adoption of cannabis-based therapies for animals.”

[Indeed, Dave reports he regularly doses two of his anxiety-prone cats with CBD, and my sister-in-law has a CBD prescription from her vet for a jittery pup. That script was put to good use over the Independence Day weekend when homeowners in our suburb tried their hand at pyrotechnics. We said tried not lost their hand… heh. But who’s to say?]

Ray continues: “Sales of cannabis-based pet products surged more than 3,200% between 2017 and 2019, making it one of the fastest-growing segments in the space.”

But hold the THC-laced products: “The compound in cannabis that has psychoactive properties is actually toxic to dogs, cats and horses.

“That’s why current research is focusing on cannabidiol, or CBD. And that focus is actually a very good thing,” says Ray.

“Because the 2018 Farm Bill made low-THC variants of cannabis — better known as hemp — completely federally legal, products derived from hemp can now be shipped to any state in the country.”

And research into hemp-derived CBD’s effectiveness for the treatment of several ailments is currently underway at Colorado State, Auburn and Baylor universities.

“But the biggest driver for the adoption of pet CBD may not be the research at all,” Ray says. “Rather, it might be Martha Stewart.”

In fact, The 5 first reported Ms. Stewart’s enthusiasm for all things cannabis in March 2019… 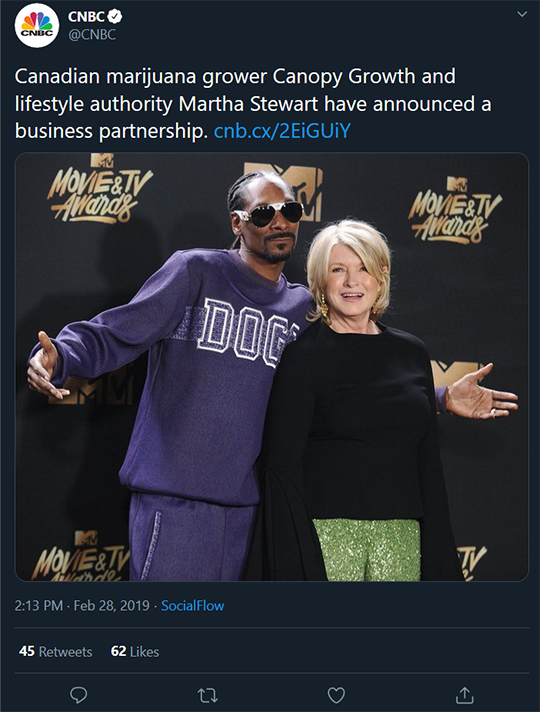 From Snoop Dogg to actual dogs…

“Her new cannabis partnership has the potential to open up pot products to a whole new category of consumers” and “will likely to resonate with pet owners looking for alternative therapies for pets with hard-to-treat chronic ailments.

“It’s an exciting time for pet CBD products — and it’s only just getting started!” Ray says. “I’ll keep you posted as new developments in this space arise.”

From the annals of graphic design gone awry, a logo meant to mark products as made in Australia got a most unfortunate reboot… 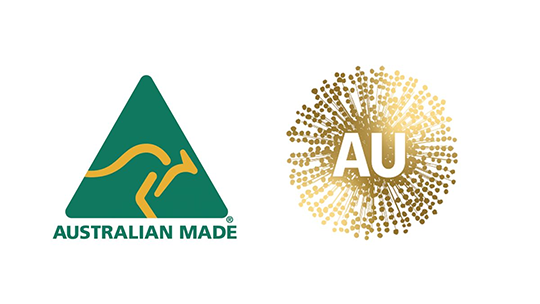 That’s right, from a jaunty kangaroo named Skippy to what most of the world now recognizes as a coronavirus under a microscope.

Bad optics, as the cool kids say. (Though, truth be told, I associated the symbol with gold… Make of that what you will.)

Hmm… It’s not a Rorschach test, is it?

P.S. Don’t miss out on this retirement-changing opportunity…

Available only through MIDNIGHT.

Take a few moments to watch this quick video…

To insulate your retirement savings from the threat of inflation and more.