Fear and Loathing (Coast to Coast)

That’s when Dave posed the question about small businesses resisting or complying with back-and-forth shutdown orders: Are business owners too afraid? Or just too exhausted?

We got so much feedback, in fact, we’re devoting today’s episode of The 5 to your fellow readers’ perspectives from across the country…

“Thanks for The 5!” our first contributor says. “I am a small-business owner (veterinarian).

“I am appalled at the lack of pushback against this asinine foolishness of government overreach! Apparently, very few people have a functioning BS meter… Mine hit the red line the first week of March.

“Just this afternoon our Ohio dictator — uh, governor — rolled out the four-color map of the pandemic by county in Ohio. I am in a ‘red’ county so I have to wear a mask inside anywhere that’s not my home.” 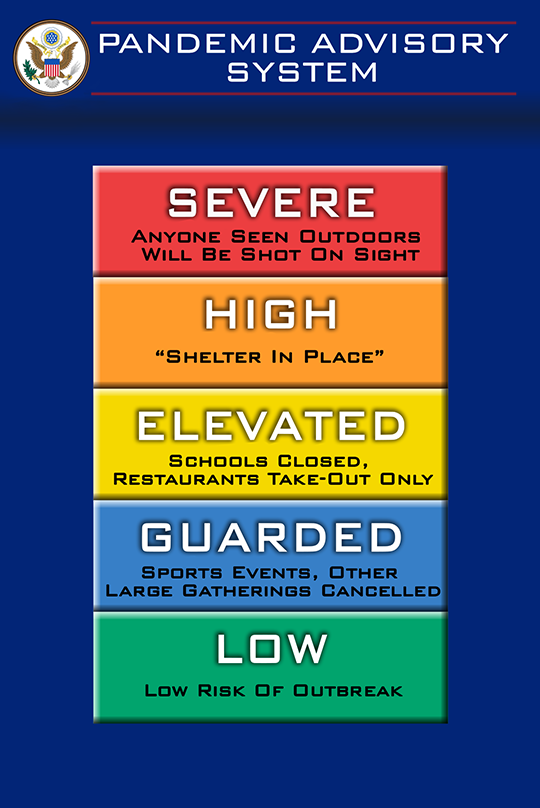 Our reader continues: “I am supposed to wear a mask in my office or face a misdemeanor offense. But wait, doesn’t a misdemeanor require a law on the books?! The legislature has not authorized that…but Gov. DeWine has spoken!

“I have not buckled to the mandates and pseudoscience and have remained open and unmasked.

“Insanity! When will people wake up?”

On the other hand, a reader says: “From what I’m seeing, business owners are too afraid of losing their businesses to stand up against the government.

“They are bending over backward to comply with ever-changing regulations. Some are very concerned about their workers, so that’s why they comply.

“Many seem to understand that they are being lied to, at least to some extent. I don’t think they know how to combat what’s happening.

“Neither do I, except to try to uncover and speak the truth.”

“Are business owners too afraid?” echoes a reader in the Lone Star State. “Or just too exhausted?

“My feeling from the business owners I’ve talked to is that they are just too tired to oppose the renewed lockdown. A few are even giving up and throwing in the towel altogether.

“I feel this whole fear-based pandemic has irreparably changed the small to medium-size business culture and attitude.

“I hope I’m wrong on that score, but that’s the feeling I get in Dallas, Texas.”

A featured contributor from Wisconsin says: “I am the bike shop owner who wrote in April that we were deemed essential and that business has been over-the-top.

“We have been open every day, serving our customers. It is widely reported that bikes are the new ‘it’ thing with schools, bars, gyms and restaurants closed.

“Most of us bike shop owners have done more than a half year’s business in these three months. New records every day.

“Sometimes even a blind squirrel finds a nut — money can be made during a pandemic.”

“My business partner and I own the largest independent (nonmall) antique and collectibles business in Sacramento.

“Both of us are retired and now doing something we really enjoy. We’ve been in this business for 25 years and at our present location for 20 years. We have 6,000 square feet of space and are very diversified between small collectibles and antique or vintage furniture. We’ve had a website since 1999 and do occasional business on eBay.

“For most small retail businesses like ours, the first rule during times like these is just to stay in business… and, if possible, try to outlast our competition.

“Second rule is to cut expenses and be more conservative in purchasing. We closed on March 16 for five weeks but negotiated a rent reduction by two-thirds through May 31, as we anticipated a very slow period. We laid off our one part-time employee, but even with that and the rent decrease, we had a small loss.

“We’ve since obtained a 50% rent reduction from June 1 through the end of 2020, as the landlord is very appreciative of our timely payments and long-term relationship.

“Business has been very sporadic with good sales one week and very little the next week. Presently, we are losing about $1,000 a month, which we can handle through 2020. After that, we'll decide whether we retire a second time, as we’re getting up in age, or try to go on for another year.”

“Business owners — particularly of bars and restaurants — in southwest Ohio (Cincinnati area) are too exhausted and broke,” writes another.

“No sense fighting when you’re heading for bankruptcy. Everything else, however, seems to be humming along.”

And a salon owner says: “There have been too many contradictions when changing the rules for business owners. So don't shut us down!

“This virus isn't going away anytime soon, so I guess it's a little like war. Just deal with the casualties, but we cannot control this thing by shutting down the economy. I just wish people would be respectful and responsible and keep their emotions in check.

“It seems an entitlement mentality has taken hold to the point where my livelihood is now at stake. Wonder how entitled folks who’ve been living off the system during the pandemic will feel when reality hits?

“More than likely, they'll say, ‘Why didn't the government save us from ourselves?!’”

“I work as the ‘righthand man’ for the owner of an independent wood treatment facility,” another reader says. “So I am not the owner myself but pretty close to the inside information around here.

“Our product is currently selling at upward of three times its average cost. I have an order backlog that is over a month long, and I still have to beat new customers off with a stick. (Heh… as you would say.)

“We are considered essential and did not have to close down by government mandate.

However, we’ll continue to struggle in another way as long as the gubment meddles.

“How do I hire increased staff to deal with my increased business? Our current staff is exhausted and potential new hires are getting paid handsomely to sit at home….

“The guys outside do grueling manual labor in all weather conditions and, aside from their bonus incentives, would likely make more money being couch potatoes for the next three weeks (assuming the free money people don't find more handouts to keep potential workers home longer).

“If shutdowns were forced on us here, lack of labor would have been what would keep us from reopening. It might not have even been possible to stay open.

“By the way, today's newsletter hit the nail on the head. Keep up the good work!”

And a retired reader says: “Florida is on another lockdown for 60 days.

“But the local vibe: low-key, not panicky like it was in early March. That said, rarely do I see unmasked shoppers anywhere. Even on Wine Walk Thursdays!

“Here in east-central Florida, the beaches were open for Independence Day and everyone followed social distancing quite well.

“Volusia County even placed blue posts 10 feet apart as designated parking spots on the beach. We didn’t get to make bonfires like in Newport Beach, California, but rolling onto the sand in our non-4WD ride was awesome!

“But the truth is science has become so politicized that it’s difficult to set a course for the future. No one is right on this.

Or as a reader observes: “Politicized science…

“In my state, big companies including supermarkets and restaurants face a $1,000 fine for every person not wearing a mask,” a reader says.

“These big businesses are enforcing the rules, but smaller businesses, which know the state won't actually fine them, aren’t.

“It is just rampant stupidity!

“These businesses are overlooking what happened over a century ago when the Spanish flu hit. Although the U.S. was a third of its current population, there were 675,000 deaths over three years; the only hope to fight the Spanish flu was wearing masks.

“The newspapers at the time carried a little four-line poem that helped:

If you must ask,

Or take the risk,

That’s just off the top of my head…

“I'm a business owner and I pay no attention to the media nor to the emperor of my state.

“It’s business as usual with no zombie masks…. We tell customers Halloween is over.

“The first six months of the year have been even better than the year Trump took office. We'll need to make some major purchases before the end of the year to avoid giving too much to the government to finance more protests!”

And a CPA in the Cowboy State says: “I am a small-business owner in Wyoming, where we never fully shut down.

“We kept operating as usual because, of course, the pandemic hit during tax season….and guess what? It is still tax season! Any idea how many times the PPP program has had changes since April? Fifty times, so far!

“The pandemic has had a tremendous effect on our clients who are all small-business owners.

“Where we live, we are dependent on natural resources for our economy’s health – oil, gas and coal — all of which have been affected. If lockdowns in other states continue, many businesses here won’t survive.

“I am tired of this whole ordeal and ready for life to return to normal because even though we never shut down, life isn’t normal in this environment.

“To say nothing of our health and mental well-being, especially true for our children! Here in Wyoming, we’ve experienced a very high suicide rate for some reason – not really sure why.

“My 13-year-old son, who will be starting high school in the fall, has been home for almost four months and away from most friends and activities he enjoys. When the opportunity arises now, I let him hang out with his friends. But at the beginning of the pandemic that wasn’t possible and his mental health suffered because of it.

“If schools don’t start this fall, there will be a lot of kids of all ages who will be depressed, anxious, etc. Social needs in humans are high – whether anyone addresses that or not – especially in school-age children. Plus, young people are not as adversely affected by the coronavirus as others. So why not start school?

“By the time this virus is finished with us, it will have touched most people. Some will have bad reactions, but most won’t. The death rate from COVID-19 is miniscule, so why are we ruining the economy and small businesses?”

Finally, a reader lays down some ancient wisdom: “Somewhere in my files, I have a Chinese legend about Fear and Pandemic traveling through the desert to a city to kill 10,000 people.

“A stranger happens upon them and asks Pandemic if he is going to kill all 10,000.

Thanks to all our contributors today!

We’ve said it before — and it’s worth repeating — we have some of the most articulate, well-informed readers in the biz…

We’ll be back tomorrow with our regular 5 formula. Catch you then!