“The real estate market here is going crazy,” an acquaintance told me. She’d know more than most, being the township supervisor about 10 miles down the road from my home.

In recent weeks, your editor has taken to telling folks how my wife and I were years ahead of the corona-curve — taking up the telecommuting life in a remote stretch of the Upper Midwest, after I’d spent the better part of a decade working at company headquarters in Baltimore.

“Do these newcomers know we get 250 inches of snow a year?” I snarked in reply.

Turns out many of them previously attended the university in these parts. So they already know and love the winter lifestyle. (If you don’t, you won’t last long around here!)

And as it happens, my wife and I aren’t nearly as edgy as we thought…

The exodus from the big U.S. cities began well before anyone had ever heard of a coronavirus strain emerging in China’s Hubei province.

In other words, the corona-crud is only accelerating a trend that was already well underway.

Now, Nomi tells us, “Between March 15 and April 28, moves from New York to Connecticut jumped by 74% relative to that same period last year. Moves to New Jersey saw a 38% jump, and migration to Long Island leapt by 48%.”

So she said on Saturday in our sister e-letter The Daily Reckoning.

From her lips to the mainstream’s ears: Here’s what you find on the front page of today’s Wall Street Journal… 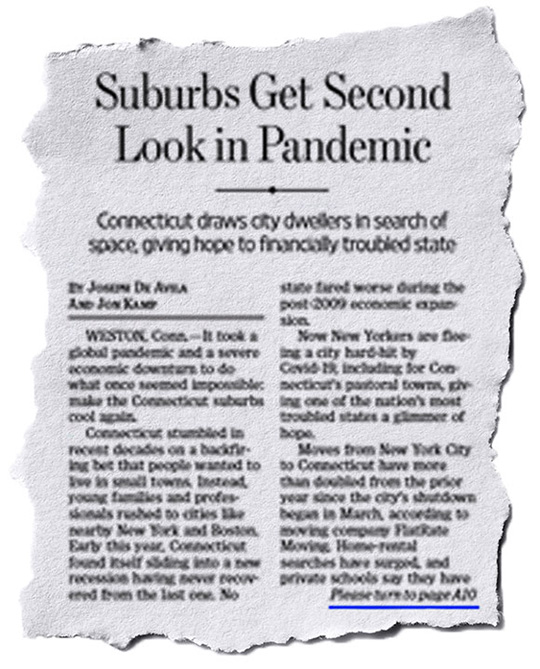 The story zeroes in on Connecticut. “No state fared worse during the post-2009 economic expansion. Now New Yorkers are fleeing a city hard hit by COVID-19, including for Connecticut’s pastoral towns, giving one of the nation’s most troubled states a glimmer of hope.”

Hmmm… Not that your tax situation will improve at all by moving from the Empire State to the Nutmeg State, but that’s neither here nor there.

“According to Cushman & Wakefield, workers are as productive at home as they are in the office, and in some cases even more so,” Nomi continues.

“For them, living in a less expensive, larger home in a pleasant, walkable suburban development represents a lifestyle that saves money and time. And that can save you from stress, which can preserve health.”

Nomi herself fled Los Angeles for the hinterlands at the outset of the pandemic. “I’ve missed LA less than I thought I would.” What’s more, three of her friends have fled LA as well.

“Some of these moves might be reversed, but some will spawn a whole new life from a whole new nonbig-city location at a far more affordable and sustainable cost.”

[Ed. note: Since leaving Wall Street, Nomi has made it her mission to take the strategies she learned alongside the high rollers… and make them accessible to everyday Americans.

In this video she reveals one of these unusually lucrative strategies. Once you discover the secret, you could see gains of 69%… 81%… and even 214%… in the space of just one day.

The next opportunity comes as soon as tomorrow morning. Follow this link so you won’t miss out.]

Two more thoughts on this subject: First, the pandemic has thrown a wrench into the schemes of the global warming crowd.

Up to now they’ve sought to use public policy to “nudge” people into dense urban centers and public transit, ostensibly to reduce fossil fuel consumption. Yeah, good luck with that now.

Second, the new legion of telecommuters might become captives of their current employers over the next couple of years. Put another way, we’ll learn how easy it is to job-hop when you don’t have the chance to meet new colleagues face-to-face and absorb the culture of a new employer in person.

The S&P last accomplished this feat about five weeks ago… and it couldn’t hold. If it sticks this time, that’s a very promising sign indeed.

➢ We’re noticing something weird in the financial media: They’re telling us earnings season is underway today with the numbers from PepsiCo. (They’re better than expected; PEP shares are up 2% at last check.)

Traditionally, the unofficial start to “earnings season” is when the first of the 30 companies in the Dow industrials report; PEP is not one of them. The first Dow stock to report is JPMorgan Chase tomorrow; perhaps the media are moving the goalposts because expectations for the financial stocks’ numbers are weak?

Meanwhile, the mainstream is finally catching up to our observation about how the MAGA stocks plus Facebook are propping up the rest of the market.

Way back in 2017 we spotlighted research from Williams Market Analytics: Going back to 2013, the five biggest publicly traded companies — Microsoft, Apple, Google parent Alphabet, Amazon and Facebook — registered average annual gains of 57%. The other 495 companies in the S&P 500 grew on average barely 6% a year.

Now we see MarketWatch picking up on updated research from Wolf Richter of the Wolf Street blog. The massive outperformance has continued.

If you subtract MAGA+Facebook from the Wilshire 5000 index (which consists of every publicly traded company)… here’s what you get. 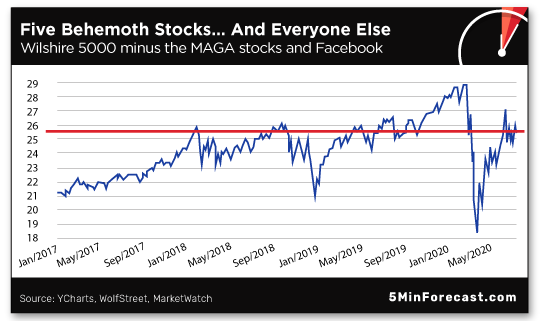 Yep. Bupkis for the last 2 and a half years, and with insane volatility to boot.

We fretted three years ago about how long the trend could go on. Richter does likewise now. “Just as these stocks pulled up the entire market, they can pull down the entire market by their sheer weight.”

We’re guessing if that happens, the Fed will jump in — as it did in March when the S&P 500 was down 35%, Microsoft threatened to break below key support at $140 a share and the other MAGA stocks were at similar crossroads.

Checking our screens this morning, MSFT trades at $215. Whee…

At least one boozemaker is trying to come up with a way to get people back into the bars safely.

The Japanese giant Suntory — maker of Jim Beam and Courvoisier among other brands — is developing a “drinking helmet.”

“The team at Suntory have generated several ideas,” reports the Financial Times, “from face shields that resemble an astronaut’s helmet to a sun visor hat that customers could keep on while eating and drinking. The hope for both is that they contain any virus-laden droplets while allowing people a proximity to each other previously standard in bars and pubs.”

Says CEO Takeshi Niinami, “It looks weird but being weird may be acceptable in the new normal.”

Sorry, no photos of any prototypes yet — which can only mean they’re so bad they’d become the subject of instant viral ridicule across all of social media, right?

To the mailbag, where a reader begins with a quotation from the late John Templeton…

“My gut check reaction when the market crashed,” our reader picks up the theme, “was that is this really a bear market? I didn't think so, I thought that in these strange times with this long of a Fed-manipulated bull market running and new highs being set, maybe this is just a severe correction in a market that's ready to head much, much higher.

“The mom and pop investors were sitting on the sidelines, I've been told by your articles, for the entire bull run of the 2010s, and now the lockdown turned all the millennials on to trading. And with partial shares and the ability to get started with much less money and to be able to do it on your phone with an app, all of a sudden they are in the game.

“The fire is raging and the true melt-up is ready to begin. I'm calling Dow 42,000 simply because Dow 40K may sound great, but in Life, the Universe and Everything, the answer is 42, so that is the number. :-)”

The 5: Wouldn’t surprise us at all, for reasons we laid out here about five weeks ago.

That said, we’re increasingly convinced we’re at the dawn of a period when precious metals will outperform the stock market — like the 1970s or the first decade of the 21st century.

P.S. Our own Nomi Prins hasn’t exactly kept a lot of her old friends since leaving Wall Street.

Not only has she written books with titles like Collusion, All the Presidents’ Bankers and It Takes a Pillage (that’s gotta be our favorite)…

She’s also sharing some of Wall Street’s most lucrative trading secrets with everyday Americans… including in this recent video.

Warning: The strategy she describes isn’t for everyone. The only way you’ll know whether it’s for you is if you watch.