“Technology is the biggest sector in the S&P 500 and has gained 15% this year while the broader index is flat,” Financial Times reports.

Even as the S&P 500 Index skidded into positive territory earlier this week, the lion’s share of the index’s companies are still negative on the year… 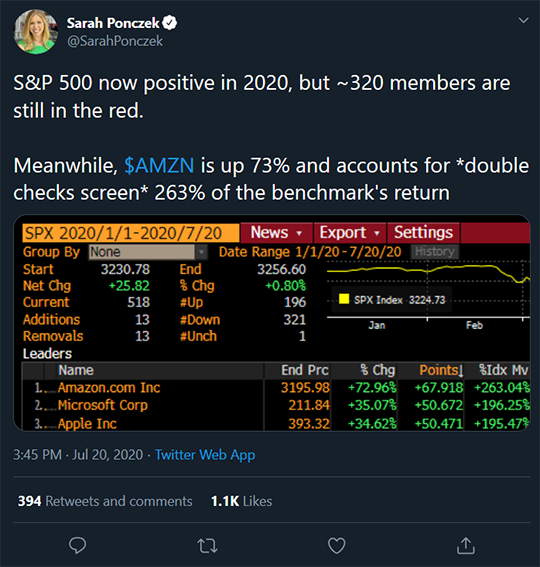 In other words, MAGA stocks — plus Facebook — continue to dominate…

“The five megacaps have all outperformed the broader market this year as investors have rushed to the safety of large, growth-oriented companies with revenue from online businesses through the pandemic.”

Leading analyst Howard Silverblatt at S&P Dow Jones Indices to make the case: “It is a top-heavy market.” Just stating the obvious…

Take, for example, the two largest S&P 500 companies — Microsoft and Apple — that together comprise over 11% of the index’s market cap or “a level of concentration that has not been seen in nearly four decades,” the FT says.

Specifically, Mr. Silverblatt draws our attention to 1982 (when A Flock of Seagulls was in heavy rotation on the radio). That year, “IBM and AT&T made up a similar proportion of the benchmark.”

Yet high-strung analysts and investors are pointing to a different year — tech-boomy 2000 — and the epic failure of the dot-com bust.

Sure, “top callers” might spotlight Y2K that marked the end of an 18-year bull market… but 1982 happened to mark the start of that same bull market.

So as haters hate, on the other side of the argument, CIO Todd Jablonski of Principal Portfolio Strategies, says: “There is no better business model than megacap tech. Cloud computing, media streaming and the delivery of [consumer] goods are tailor-made models for a life with COVID-19.”

Our income specialist Zach Scheidt agrees… with one caveat.

“Are there still opportunities left?” Zach asks. Defying Betteridge’s law of headlines, the answer is actually yes, no and maybe…

It all depends how you invest. Zach notes: “Most investors have chosen not to invest in individual tech stocks. Instead they buy mutual funds or exchange-traded funds… to help them get exposure to the tech industry.

“Unfortunately, instead of spreading their wealth among the many great tech opportunities,” he says, “this approach concentrates most of their investments in [the] five mega stocks.” 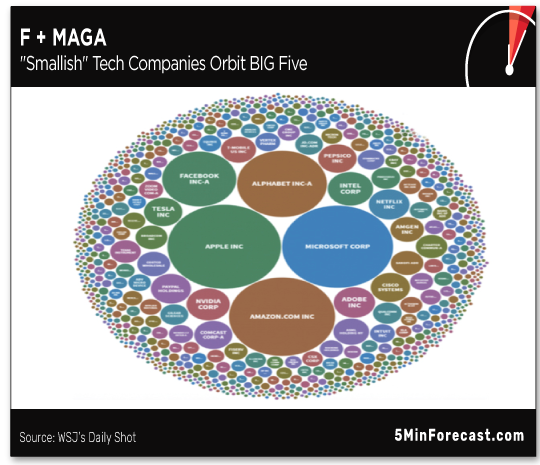 To Zach’s way of thinking, there are two key problems with this herd-mentality approach…

“First, if something bad happens to one of these stocks — like an antitrust suit against Amazon or a social media backlash against Facebook — your tech investment could take a big hit! That's because… you're not diversified.

“Second, even when something good happens to one of the smaller tech companies, you probably won't even notice,” says Zach. A stock in your portfolio might literally double in price, but it will “only show up as a rounding error in your overall return.

“That's the problem with investing in the tech market as it stands right now — lots of risk with less opportunity for truly meaningful returns,” Zach says.

But the news isn’t all bad…

“Big tech is actually creating more opportunity for smaller stock investments,” Zach says, “if you know where to look.

“Big tech companies have built tremendous value with both the cash on their balance sheets and the surging value of their stock shares.

“Meanwhile smaller companies — even those with excellent products and new tech ideas — are struggling,” says Zach. “It's just too difficult for them to get access to the capital needed to grow.

“That's where the Big Tech opportunities come into play.

“Increasingly, blue chip companies are able to use the value of their stock to fund entire buyouts of rival companies,” Zach says.

This situation played out earlier this week in the oil and gas industry. “Chevron used its own shares to take over Noble Energy,” notes Zach. “This buyout transaction caused shares of NBL to surge — even though the energy industry is still under pressure because of relatively low oil prices.

“Imagine how many more tech companies will surge as megacap companies like Apple and Amazon start to put their inflated shares to work and buy out smaller rivals,” says Zach.

“That's exactly what I'm expecting to see in the second half of this year.

“Big tech companies have to continue to grow if they're going to keep shareholders happy,” Zach says.

“And the best way for these Big Tech companies to grow… is to buy out other companies completely.” So Big Tech acquires competitors’ innovative technology, and sells for a premium to their loyal customer base.

“Bottom line,” says Zach, “we can expect a flurry of buyout deals as Big Tech stocks use their expensive shares to buy out rivals.

“If you invest in the companies that are being bought out before the deals are announced, you'll be able to profit when these buyout stocks surge higher.”

And Zach and his team are primed for more takeover opportunities. To help investors like you leverage the power of these buyouts, he’s offering a special incentive.

Get all the details right here… but please note the deadline to act is Thursday, July 23, at MIDNIGHT.

As for the major economic number of the day, we hate to say we told you so but…

(No seriously, we hate to say it.)

Last week at The 5, we mentioned: “Should be interesting (is that the right word?) to see what jobless claims are next week after more states — including Florida, California and Texas — put the kibosh on reopenings.” 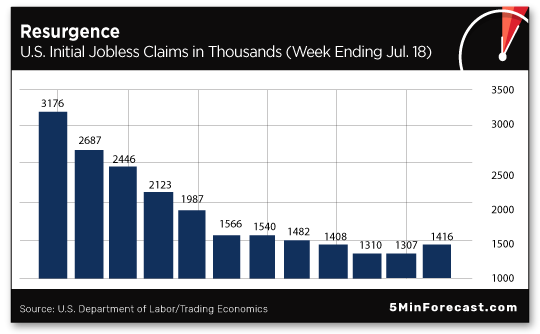 According to Trading Economics: “The number of Americans filing for unemployment benefits increased 1.42 million in the week ended July 18, accelerating for the first time in nearly four months and compared to market expectations of 1.30 million…

“A resurgence in new COVID-19 cases forced several states to scale back or pause the reopening of their economies.”

The most recent number lifts total jobless claims to a dumfounding 52.7 million since March 21.

“This looks to be the start of something MAJOR… 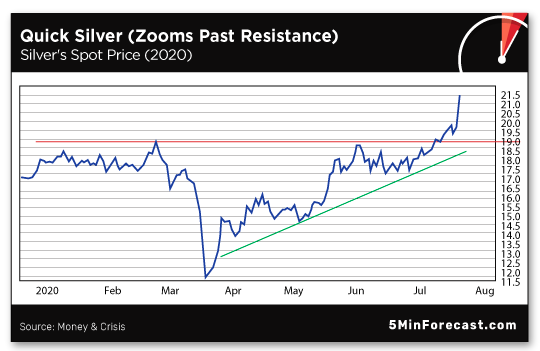 “And why not?” says Graham. “The markets have clearly figured that policymakers will be responding to every issue by printing more money.”

On Tuesday, “The European Union announced a €750 billion ($858 billion) stimulus program. This comes after the ECB already printed €1.25 trillion,” he says. And stateside, Congress “is now in talks for an additional $1 trillion stimulus program.

“By the look of things,” Graham says, “this has ignited a major bull market in precious metals”… and “we’re just getting started.”

One Nasdaq-listed company — Elon Musk’s brainchild Tesla — announced earnings late Wednesday afternoon. A highlight of the report? TSLA locked in its fourth-straight quarterly profit, which will soon qualify it for inclusion in the S&P 500… pushing even more buying through index funds.

“You might recall Nikola Corp. (NASDAQ: NKLA) — an alternative-energy auto stock that caught fire during the post-crash rally this spring,” when, “the company, which claims to be developing a hydrogen-powered truck [first] appeared on the Nasdaq.”

At the time NKLA came to Greg’s attention, he waved a couple red flags. First, the company’s name seemed like a blatant appropriation of Tesla’s brand recognition. (Nikola Tesla?) Second, the company that doesn’t expect to pick up any revenue this year is already taking orders for trucks… that have yet to be manufactured.

“I mentioned that I wasn’t sure if the company [would] be around in five years,” Greg says, “despite its lightning-fast rally.” And “after the company announced it would sell 24 million shares,” Greg continues, “the stock dropped a whopping 20% to kick off the trading week… 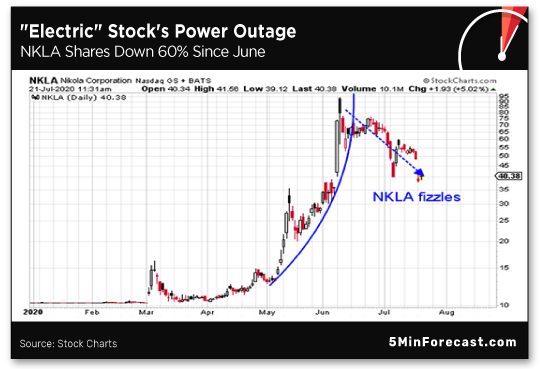 “Gains from June have already vanished,” says Greg. “As we suspected, traders piling into this stock without an exit plan got burned. The stock has now dropped 60% from its June highs.”

A lesson for investors? “Stocks like Nikola that go parabolic do not correct sideways,” Greg says.

“When you see a stock moving into extremely overbought territory and posting a chart that starts to look like a hockey stick,” he says, “you expect a sharp reversal to appear at some point as too many traders race for the exits with whatever profits they can carry…

Greg says: “There’s nothing wrong with trying to play a stock that’s screaming higher. But it’s important that you learn to recognize the signs of a stock that’s gone vertical. If you aren’t in these plays for the long haul, it’s best to remain aggressive when taking profits.

“You’ll rarely nail the top,” he emphasizes, “but you will save yourself a lot of pain (and money) by taking gains off the table early and often.”

“As a working stiff (sucker) who still has to go to a job and do stuff to pay bills,” a reader says, “I've often wondered how activists in the news manage to make a living.

“Of course, some draw checks from NGOs, which are funded by donations, but it baffles me how so many others who don't earn a regular paycheck get by. Marching, protesting and rioting generally doesn’t pay the bills (unless there is some Soros-like character behind it all, but I'm not buying that).

“But now I get it: Congress is funding protesters by increasing weekly unemployment payments by $600. Suddenly, the calculus has changed. The need to work has been replaced by the ability to not work — freeing up time to do, um, other things. It now pays better to attend demonstrations than do something productive.

“Our tax dollars have probably gone to far worse things than paying for people to riot rather than work, but if it's all the same, I'd prefer my taxes not to pay for such activities in the future.

The 5: We hear you… though there are almost certainly protesters who sincerely believe in their cause to the point of personal sacrifice. And they believe they are, in fact, “doing something productive.”

That being said, $600 weekly federal unemployment payouts come to a halt in just eight days and Congress hasn’t come to an agreement on the next iteration of federal stimulus. (If any.)

P.S. To help secure a prosperous future for you and your family, we underscore one of our most lucrative trading strategies. A strategy that just booked a 50% gain on TWTR for subscribers in 24 hours… and a 100% gain in two weeks!

All to say you don’t have to wait months for these opportunities to come to fruition; instead, you’ll have profit opportunities week after week.

How do you do it? Click here and Dave will show you how.