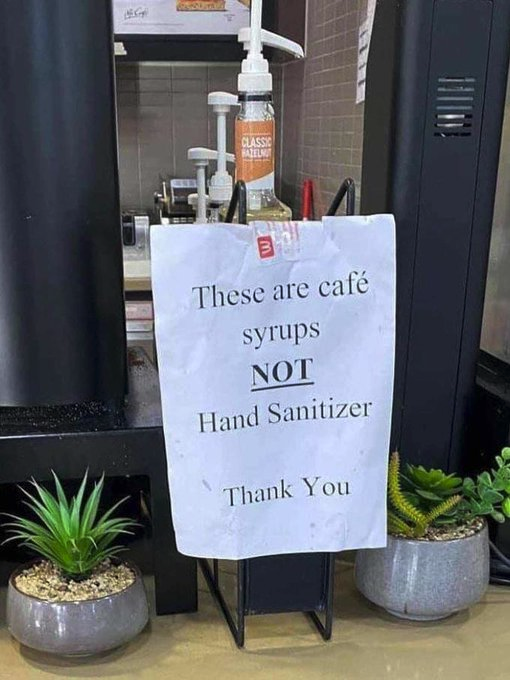 You get your yuks where you can find ‘em these days, right?

Which tees up a point Jim Rickards made to his Strategic Intelligence readers this week about how the year 2020 began, and how it’s turned out so far: “After [a] triple-whammy of pandemic, depression and social disorder, no one cared about the election.”

But now we’re less than 100 days out. Seeing how Jim was among the very few public intellectuals who anticipated a Trump victory in 2016, it’s fitting to have him peer ahead to Nov. 3.

We preface our musings today with a cautionary word if you’re a newer reader, and a cautionary reminder if you’re an older one: We generally don’t “do politics” in The 5, but now and then events force our hand.

Indeed, by and large, we take a childlike approach to politics here. No, really. Here are real responses of real children to the question “What is politics?”

OK, the kids are from South Africa — but that just reinforces how their wisdom is both universal and timeless, no?

So… having (re)established our antipartisan bona fides, we turn to Jim for his unique style of election handicapping, informed as always by a blend of the 18th-century Bayes’ theorem and the 21st-century science of probabilities.

Begin with the deck stacked against Trump. “Only three presidents in the past 100 years have lost a reelection bid,” says Jim: “Herbert Hoover in 1932, Jimmy Carter in 1980 and George H.W. Bush in 1992.

“What they had in common was a recession close to the election. All presidents who sought reelection and did not have a recession won.”

Nor is Trump helping his own cause, says Jim.

“Trump doesn’t get it. He’s still running around talking about ‘Sleepy Joe’ and ‘Crooked Hillary’ and ‘Dirty Cop James Comey’ and nobody cares. Trump talks about the stock market and nobody cares… He has lost touch with the American people. The people have noticed.

“Trump has also not articulated a vision for his second term. The first thing I learned when I was a Washington lobbyist is: ‘You can’t beat something with nothing.’ Biden may be a weak candidate, but at least he puts out policy positions on a regular basis… You may agree or disagree, but he keeps articulating what he wants.”

Still… if you’re reading about all the polling data that has Biden way out in front… and remembering how Hillary Clinton was way out in front four years ago… and wondering if Trump might pull out a repeat of 2016… Jim says you’re onto something.

“The polls are riddled with errors,” he explains, “including oversampling Democrats, polling ‘all voters’ instead of ‘likely voters’ and organizing and framing questions in such a way to lead the subject to a predetermined conclusion about Biden as their choice for president by starting with questions that cast Trump in a bad light.”

Not that Trump has it in the bag, though: “Biden’s lead is simply too big to discount” — to say nothing of Biden’s lead in key states.

“Biden is up 7 points in Pennsylvania. It’s almost impossible for Trump to win if he does not take Pennsylvania. Even if the polls are skewed (they are), a statistical adjustment would still leave Biden with a 3–4 point lead. That’s a lot to overcome in just three months.

“That said, there is some highly persuasive scientific research on polling that says Trump will win,” Jim goes on.

That’s because asking the expectation question has the effect of growing a pollster’s sample size, perhaps by orders of magnitude.

“You’re asking about their expectation based on the likely actions of everyone they know. This social network includes family members, neighbors, co-workers and even total strangers with whom one might chat about politics…

“If your base sample is 1,300 respondents and the average social network of each participant is 50 people, then the sample size on the expectation question is 65,000 people. This much larger sample size means a much smaller margin of error and a much more accurate forecast.”

“This analysis is not just a hypothesis. Its validity is borne out by decades of hard data,” Jim asserts.

“The research shows the expectation question has the right forecast 78% of the time when the two polls disagree. Putting this data together and using the best available science shows that Trump is the favorite to beat Biden according to the latest polls.”

Granted, a lot can happen between now and Nov. 3. The key to the Bayesian analysis Jim performs is a relentless process of updating to reflect new incoming information.

The best way to keep up with Jim’s analysis week by week is with a subscription to his entry-level newsletter Strategic Intelligence… but we’ll share a nugget or two here in The 5 now and then.

Next week, we’ll get into the election’s implications for your money — including an ETF set to soar no matter who wins.

To the markets… where the rotation out of tech and into more traditional names is on hold, at least today.

The Dow is in the red, and so is the S&P 500 (although the S&P is still comfortably above that 3,200 threshold we’re watching).

But the Nasdaq is in the green, over 10,600, on the strength of quarterly numbers from four of the Big 5 tech stocks. A quick summary…

Good thing for those four companies’ CEOs that they appeared before Congress Wednesday and not today, right?

“The market is just waiting for its next catalyst,” says our Alan Knuckman. “The low bar for this quarter has had 80% of S&P companies beating expectations so far. But remember, there’s plenty of earnings data coming up to further fuel the fantastic run.”

Briefly, a bunch of numbers in one economic report out this morning, the Commerce Department’s income-and-spend report…

And a quick postscript to yesterday’s miserable GDP number. Here’s what greeted me when I opened The New York Times’ iPad app first thing this morning… 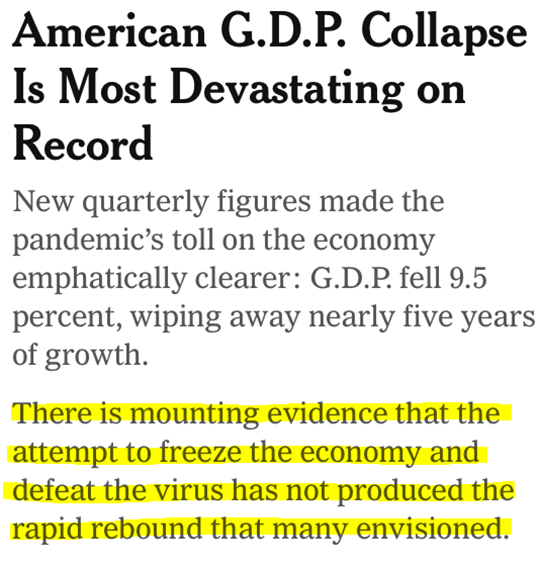 But it’s all good for AAPL, GOOG, AMZN and FB. Such is life in the Twisted Tale of Two Americas.

As we write this morning, the bid on the Midas metal is up to $1,971 — another record weekly close if it holds by day’s end.

“The market has arguably overextended itself in the short term and gold is clearly overbought,” writes Ross Norman of the London-based bullion dealer Sharps Pixley. “It is due a period of consolidation which would confer longer term strength in the price.

“That is assuming gold behaves in its normal, rational and sober manner.”

“If you want a fictional example of the ramifications of a cashless society,” a reader writes on one of our ongoing topics this week, “just watch the movie Enemy of the State with Will Smith.

“With a digital monetary system the government can cut off anyone’s ability to pay for goods and services anytime it wants with the use of a central database.

“Control is the main purpose behind the elimination of cash. The ruthless COVID restrictions have created an atmosphere of fear and anxiety along with severe unemployment. Government is coming to the rescue of the problem (that it created) with helicopter money and bailouts. This has provided the cover for the Fed to provide limitless debt, ultimately destroying our present monetary system.

“A fedcoin is likely on the way thanks to the planned ingenious, diabolical COVID scenario that the media have ceaselessly beaten into our heads — disproving ‘You can’t fool all of the people all of the time.’”

The 5: Yeah. Almost makes you long for the days when George W. Bush said, "You can fool some of the people all the time, and those are the ones you want to concentrate on."

“Did you get a look at the 2020 quarters yet? Not seeing anything about them yet!!!” a reader writes excitedly.

So we went poking around the interwebz a bit this morning. The U.S. Mint is nearly done with its “America the Beautiful” series of quarters, begun in 2010. The back of each one features a national park or historic site, one from each state and territory.

The New York Times had an exceptionally weird article about them yesterday. You get the gist of it, such as it is, here… 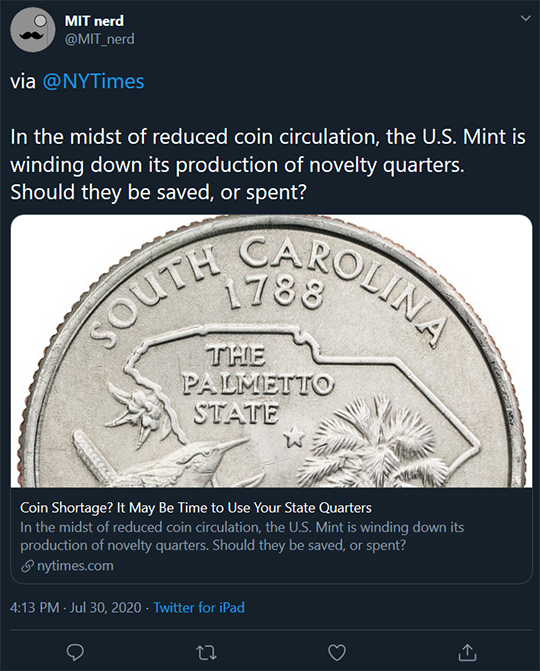 But we still don’t know what the reader’s getting at. Is it something about the design of this year’s crop? 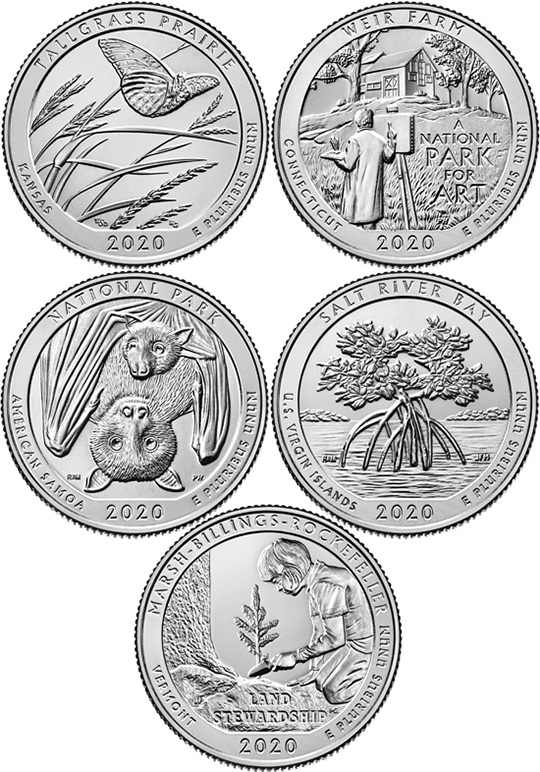 What gives? Is there supposed to be a hidden satanic message or something?

Now it’s gonna bug us all weekend. Thanks for nothing, buddy!

P.S. Our ace copy editor wonders if the reader’s referring to the bat on the American Samoa coin, seeing as bats are one potential origin of the corona-crud. Mystery solved?

P.P.S. Confidential to Financial Reserve members: The cashless society is among the many topics Addison Wiggin covers today in an exclusive briefing with our old friend Chris Mayer, who’s running a hedge fund these days. (Of all things!)