Looking at The 5’s voluminous archive, we note it was exactly two month ago today that we featured the headline “Gold $2,000 (Soon)”… Just in time, too, since gold made history Tuesday, motoring past $2,000 per ounce.

Our macroeconomics maven Jim Rickards provides some context: “There were a lot of headlines about a week ago when gold reached a new all-time high of $‌1,938 per ounce, the highest level since September 2011.

“The $‌2,000 per ounce level is not a big deal compared with the current level (it’s just a 0.5% gain from Monday’s price),” he continues. “But it could be a huge deal psychologically.

“Gold at $‌2,000… gets attention and is easy to digest. Investors immediately focus on the next round number.”

Of course, mainstream outlets are plucking low-hanging fruit today as to the reasons why: “resurgence of coronavirus cases”… “rising U.S.-China tensions”… “fears of money printing.”

As if those things haven’t been part of the scenery for weeks now, right?

Nah… this is a short-covering rally, according to our mining expert Byron King…

“More and more gold ‘traders’ are holding contracts to expiration and demanding delivery,” Byron says. “This withdraws even more physical gold from the overall market flow.

“It serves to increase risk for speculators who attempt to move the ‘paper gold’ market downward. They might get caught in a delivery squeeze and have to pay through the nose to cover their play.

“But large volumes of precious metal are simply not for sale at retail,” says Byron. “There’s not enough product. And many items come with ‘delays’ in shipping.”

Byron reports one precious metals dealer saying: “Nobody calls to ask about liquidating metal because the price is up by 35%. Nobody!” Understandable…

“Gold has already had a great run, and now the question is whether it will continue to trade higher — or if the best part of this trend is now over,” Zach says.

To his way of thinking: “It’s definitely not too late to profit from a massive move in the gold market…

“The last time we saw a true bull market in gold was in the months following the last financial crisis,” Zach notes. “There was a tremendous amount of uncertainty about how the economy would recover. And the government was shoveling money into the economy in new ways and at an unprecedented pace.

“As you can see in the chart below, the buying pressure sent gold steadily higher. 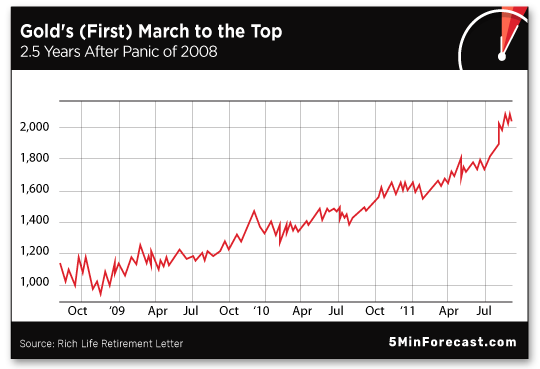 “The stock market and gold bottomed near the end of 2008 or at the beginning of 2009 (depending on which market you're looking at),” Zach reminds us. “This market bottom set the stage for the longest bull market in history for stocks. But it also set up an extended bull market for gold!

“In fact, for the next 2 and a half years, gold traded steadily higher.”

Back to the chart: “Looking at the big picture for gold, you can see that the price of gold more than doubled from its low during the worst of the financial crisis,” says Zach. “And it traded higher for years following the crisis [with] unprecedented Fed stimulus.

“All told, despite gold's 33% rally from the March lows, it still looks like an opportunity that’s just getting started.

“So instead of being disappointed that you may have missed out on the start of this rally in gold,” Zach says, “I'd encourage you to start allocating a portion of your retirement savings to gold.” (For Zach, that also means investing in precious metals streaming and royalty companies… good to know.)

We’ve said it before — and we’ll say it again — Jim Rickards recommends allocating 10% of your portfolio to gold… not that there won’t be bumps on the next ride up.

“Gold investors are often baffled by the fact that gold does go down in the midst of a market crash of the kind we saw last March,” Jim says. “The conventional wisdom is that gold is a safe haven and if stocks are crashing, then hot money should be flooding into gold for protection.

“Why is it the case that gold [often goes down] alongside stocks?” Jim asks.

“While the weak hands are selling gold, the strong hands stand by until the price drops enough. Then they pounce,” he says. “A rally begins quickly and builds until gold hits a new higher plateau.

“There’s a good lesson in this pattern for retail investors,” Jim says. “When the next stock market panic arrives (probably soon), you’ll see the price of gold drop.”

Jim concludes: “Don’t panic and don’t sell your gold. Just wait. After about 30 days, you’ll see the turnaround. That’s the time to jump in with both feet, buy gold and enjoy the gains.”

“The ‘work from home’ stocks craze continues into the dog days of summer,” says charthound Greg Guenthner, “as many white-collar workers remain trapped in their home offices… and their home gyms.

Now to capitalize on the craze, there’s a new ETF — the Direxion Work From Home ETF — with the nifty ticker WFH… 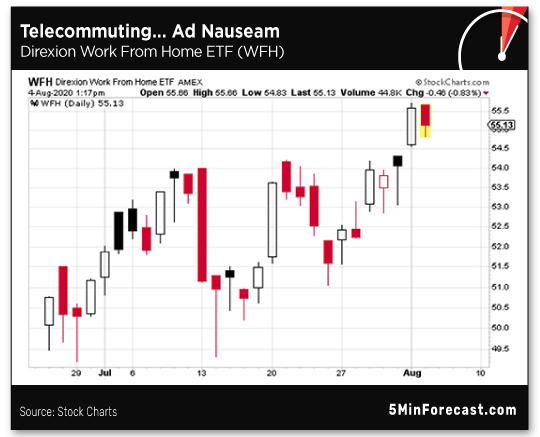 Trading for less than two months, WFH is “already consolidating the move to new highs it posted on Monday,” Greg says. “This trend isn’t dead yet.”

To the market today, where the Dow’s rallying for the fourth straight day; the Big Board’s up 350 points to 27,180 points.

No major economic numbers to report unless you factor in ADP private payrolls — up just 167,000 in July — and seriously missing the consensus mark of 1 million.

Economist Andrew Hunter of Capital Economics reminds: “ADP has never been a great guide to the official payrolls figures and has actually been particularly poor in recent months, with the ADP’s initially published estimates for May and June (which have since been miraculously revised up to better match the official data) proving far too pessimistic.”

“Decentralized finance (DeFi for short) covers a broad range of products and services which aim to make participation in financial services more accessible to everyone,” says iconoclast investor James Altucher.

“These tools allow investors to participate in everything from offering collateralized loans (loans where the borrower puts up some collateral)… to prediction markets (gambling on the outcome of events like the weather or presidential elections)… to leverage (being able to lend/borrow money to make investments)… to synthetic derivatives (betting on the outcome of investments without actually owning the investments).

“Which is to say,” says James, “DeFi lets regular people make the types of complex investments previously only available to the most sophisticated investors and banks” — including “allow[ing] crypto investors to invest and borrow in ways that were previously impossible for small investors.

“The big attraction? Returns from investments in DeFi can be enormous,” says James. “For example, some cryptocurrency loans now offer as much as 30% annual interest to lenders.” (And in the case of DeFi, you might be the lender.)

“These returns don’t come without considerable financial risks,” James notes. “For this reason, I’ve mostly avoided writing about this market. Investors can lose everything if they don’t know what they’re doing.

“But despite these risks, the amount of money locked in DeFi contracts has grown 8x ― from $425 million at the end of September to over $3.37 billion today,” says James.

“That number is rapidly accelerating. In the past 30 days alone, the market has effectively doubled.” (Emphasis ours.)

“This massive growth is likely only going to get larger as long as [speculative] investors believe there is easy money to be made.”

Easy money aside, James concludes: “My readers have an advantage” because “my team is currently looking into the best and safest DeFi investments that will allow you to capitalize on this growing trend without the risk.”

“More than 800 craft distillers across the United States leapt into action to help in the first wave of the pandemic,” says an article at The New York Times. Instead of these distillers helping take the collective edge off, they transitioned to making a hot commodity — hand sanitizer.

These mostly small mom and pop operations, however, were left holding the bag when hand sanitizer manufacturers — such as Purell — ramped up production. That’s when “the price for sanitizer, which had hovered at $50 a gallon, plunged to around $15 a gallon.”

Phil McDaniel of St. Augustine Distillery in Florida says: “In the beginning, it was just unbelievable, the sort of frenetic demand that was out there. [And] it was so gratifying to us to be able to come in and help.” Now? Mr. McDaniel is sitting on 1,000 gallons of hand sanitizer… plus gallons more of the raw ingredients to make more.

“At the same time, the economics of the $3.2 billion craft beverage industry have deteriorated,” The New York Times says. “Battered by months of lost liquor sales, many cannot afford to spend more on making sanitizer when all they really want to do is get back to making whiskey to survive.”

Leading Spencer Whelan of the Texas Whiskey Association to say: “It feels a little bit like no good deed is going unpunished right now.”

We have nothing snarky to add…

To the mailbag, where a reader says: “Your mention of ITA and XAR was interesting to me…

“I have been a stock analyst for a financial adviser for 11 years and have compared ETFs. For at least six years, PPA — Invesco Aerospace and Defense ETF — has beaten both of your choices soundly.

“Although the expense ratio is slightly higher, I will take better returns every time.” 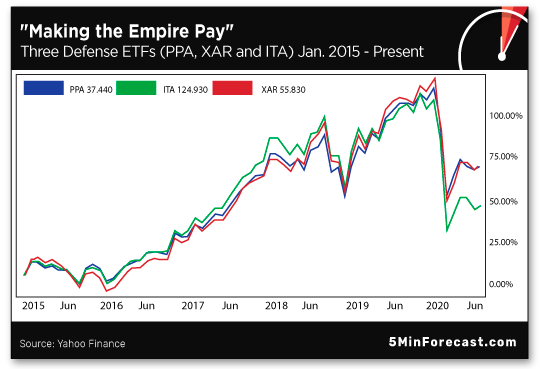 PPA doesn’t look dramatically better than XAR to us — unless you’re including reinvested dividends.

Take it easy today… Dave’s back with more from The 5 tomorrow.