It’s stuff like this that, sooner or later, will kill off the U.S. dollar as the world’s reserve currency… 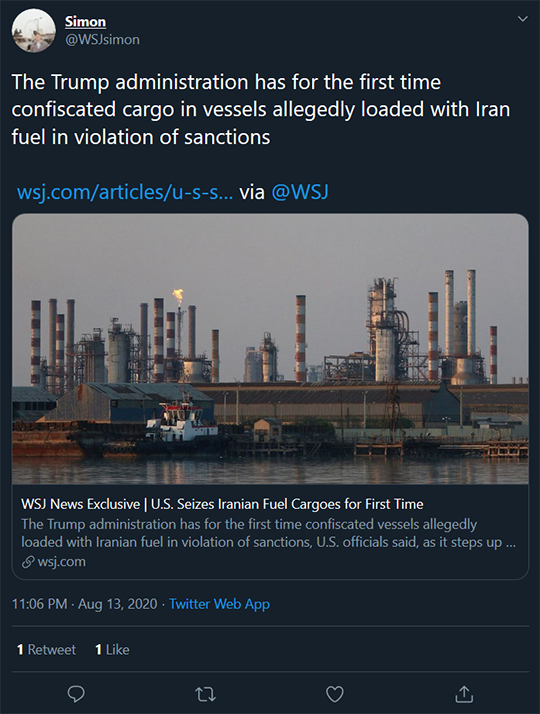 From the AP newswire: “The Trump administration has seized the cargo of four tankers it was targeting for transporting Iranian fuel to Venezuela, U.S. officials said Thursday, as it steps up its campaign of maximum pressure against the two heavily sanctioned allies…

“A senior U.S. official told The Associated Press that no military force was used in the seizures and that the ships weren't physically confiscated. Rather, U.S. officials threatened ship owners, insurers and captains with sanction to force them to hand over their cargo, which now becomes U.S. property, the official said.”

But that’s a distinction without a difference.

“The four vessels — Luna, Pandi, Bering and Bella — were seized at sea in recent days and are now en route to Houston,” reports The Wall Street Journal. “Senior administration officials are expected to meet the tankers in the coming days at an event scheduled to mark the docking.”

If you’re any nationality other than American, this development smacks of state piracy.

But if you live a comfortable existence inside the Beltway bubble, this is how you roll as “the economic policeman of the planet” — as the French finance minister labeled Washington in 2018.

More from the WSJ: “Senior U.S. officials said that besides jetting around the world warning governments against helping Iran, they have conducted a broad outreach to the tanker industry, including insurance companies and firms that provide shipping licenses required under international maritime laws. That effort, along with official warnings published by the U.S. Treasury, sparked many companies to carry out a review of the transactions on their books, according to government and industry officials.”

U.S. law applies everywhere, all over the world — and as long as the U.S. dollar remains the globe’s reserve currency, Washington can enforce that law at will.

On the one hand, the tanker seizure is novel. On the other hand, it’s just another step in decades of escalating U.S. sanctions policy.

Cato Institute scholar Doug Bandow observed the start of this evolution as a special assistant to President Ronald Reagan.

“Originally, American officials punished American companies and individuals trading with disfavored states,” Bandow explains. “However, in the 1980s the U.S. began expanding penalties for commerce with the Soviet Union and later Cuba to foreign, especially European, subsidiaries of American firms.”

The Clinton administration took sanctions to new levels in 1997 — “punishing any company or individual doing business with anyone in Sudan if they had the slightest connection to any U.S. banking institution. Which prevented normal commerce, irrespective of where a firm was located. As a result, even Khartoum’s embassies had to operate on a cash basis.”

➢ Did the sanctions work? Of course not. Sudan’s dictator Omar al-Bashir clung to power for 22 more years, deposed in a coup only 16 months ago.

After the Sept. 11 attacks, the Bush and Obama administrations put this approach on steroids. “Today,” writes Bandow, “the U.S. uses America’s dominant economic role to insist that every resident of Earth follow Washington’s directives.”

And so as of 2018, Washington applies sanctions or other forms of economic punishment to countries encompassing a quarter of the world’s population. How long can that go on?

It comes back to the slow-motion “de-dollarization” process we’ve been chronicling since 2014. The only way governments and companies and peoples can get out from under Washington’s thumb is to get out from under dollar-based transactions.

It’s why Washington’s “peer competitors” in Beijing and Moscow have been so keen to accumulate gold in recent years.

And we daresay gold’s run-up from below $1,500 in March to over $1,900 now is fueled in part by global investors nervously watching Washington swing the sanctions hammer more and more.

For China, the effort is taking on a new sense of urgency: One of the country’s financial mandarins warns that Chinese assets overseas are at risk of U.S. seizure.

“The financial sanctions could be done in a variety of forms, targeting banks or certain industries,” said former Chinese central bank adviser Yu Yongding this week.

Yu’s influence can’t be understated. Way back in 2008, we took note of how he was urging the central bank to embark on its massive gold accumulation. Officially, those reserves have more than tripled in the years since; unofficially, the increase is probably much higher. We also noted his warning in 2011 that “now is the time to end [China’s] dependency on the U.S. dollar.”

“This is why China is heavily concentrating on their domestic markets,” says our Nomi Prins, “including investing in local companies that will give them some type of cushion should a long financial war ensue or sanctions are brought against them.”

Then again, if Washington presses its luck too far, events could move more swiftly than anyone imagines.

That’s the lesson of 1979 — when President Jimmy Carter froze Iranian assets after the seizure of the U.S. Embassy in Tehran. As we’ve documented before, that single act triggered a global panic out of dollars and into German marks, Swiss francs and gold. Gold went parabolic, doubling in barely three months from $390 an ounce to $800.

It was only extreme measures by Federal Reserve chairman Paul Volcker that restored confidence in the dollar — measures not available now to Jerome Powell, unless he wants to collapse the U.S. economy even worse than it already is.

Then as now, you’ll be grateful if you hold gold and other precious metals. You know our favorite way to do so. You also know we believe in it so much that we bought a piece of the company and we stand to be compensated once you fund your account. You also know you’ll still pay among the lowest premiums in the industry. ‘Nuff said.

For the moment, the mighty American consumer continues to prop up whatever remains of the tattered U.S. economy.

Retail sales climbed 1.2% in July, according to the Commerce Department, on top of an upwardly revised gain of 8.4% in June. Leading the way is a 22.9% surge in electronics and appliance sales.

Overall, retail sales are now just as strong as they were before the pandemic hit. But again, these are July numbers. What happens now that the extra $600 a week in unemployment benefits are gone?

In contrast, U.S. industry is still nowhere near where it was before the lockdowns.

Industrial production rose 3% in July, according to the Federal Reserve. That’s the good news. The bad news is that it’s still 8.4% shy of February’s level.

The capacity utilization number continues to improve as well; 70.6% of U.S. industrial capacity was in use during July. Again, that’s the good news. The bad news is that it’s still one of the lowest levels on record going back more than 50 years… 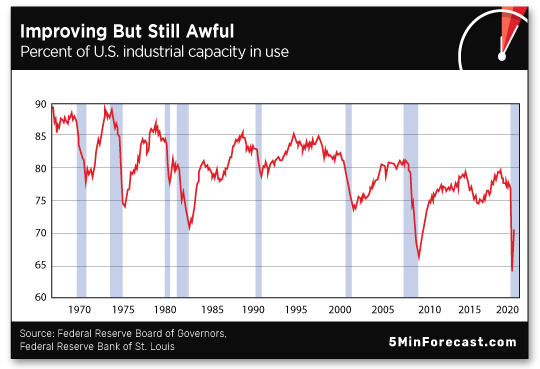 The outlook for the rest of the year is for the rate of improvement to slow — especially given moderating levels of auto sales.

The major U.S. stock indexes are meandering as the week winds down.

The Dow is slightly in the green, the S&P 500 is flat, the Nasdaq is down about a third of a percent.

Among the big winners of the current earnings season — cannabis stocks.

Not that the mainstream would notice; your typical financial news outlet focuses on the percentage of companies that beat analyst estimates — a head game corporate accountants play with great skill.

More revealing is the actual growth or shrinkage in profits: “So far,” says our penny pot stock authority Ray Blanco, “about 31 of the 63 cannabis companies tracked by the Bloomberg Global Cannabis Competitive Peers Index have reported their numbers for the quarter. Of those, the average year-over-year earnings growth reported has been 83%.”

In comparison, earnings for the typical S&P 500 stock have fallen 9.3%.

And those profits are only set to grow as more cash-strapped state governments look to cannabis legalization as a new source of revenue.

Welcome to the era of the “speakeasy gym.”

We’ve previously taken note of gym owners openly defying state lockdown orders — with unfortunate results that include getting their utilities shut off.

In contrast, many others are proceeding covertly. 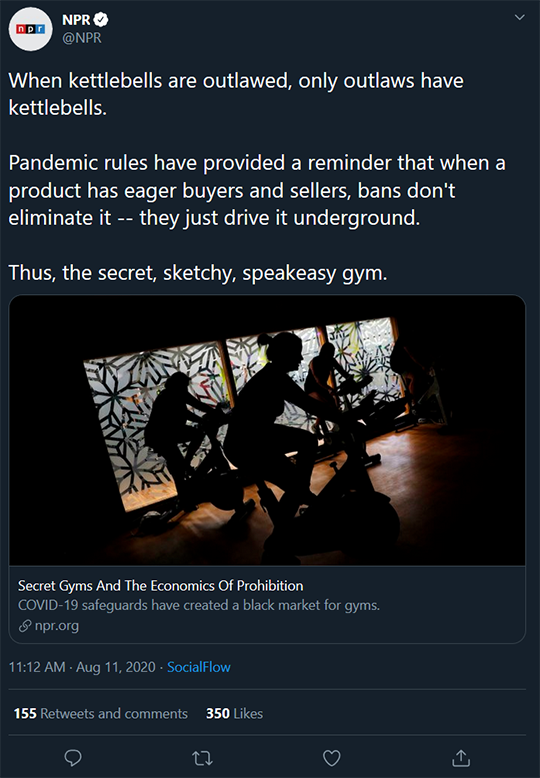 Case in point — a gym rat in Tucson, Arizona, named Christina, “who asked us not to give her last name for fear of being labeled a snitch,” says NPR. Being a regular, she got a text from the gym owner in mid-April, inviting her to come back.

Imagine her surprise when she showed up, though. “She used her fob to get in the gym's doors, and ‘there's over 10 people there that I've never seen before in my life,’ she says.”

No masks, no distancing, no sanitizing the equipment, either. They were refugees from chain gyms that were complying with shutdown orders. And the owner was charging them a higher rate.

Law of unintended consequences, anyone? “When markets get pushed underground, quality control tends to go down,” the NPR story says. “In the case of drugs, this means potentially finding rat poison in your weed. When it comes to gyms in the COVID-19 era, it means potentially creating fitness environments that are even more likely to spread the virus than if they were legal and regulated. ‘When you drive something underground, your ability to regulate it goes away,’ Miron says.”

And Miron finds the level of compliance goes down the longer a prohibition goes on. Just wait till winter arrives in the more northern reaches of these United States…

To the mailbag, and feedback on yesterday’s episode of The 5…

“This email is more all over the place than a bee in a hurricane.

“Thanks — but next time I’ll look at the signature. And if the email is attributed to ‘Dave Gonigam,’ I won’t bother reading it.

“Apparently he has the attention span of — wait — got distracted.”

The 5: Dude, our records show you receive this e-letter as a bonus to a paid subscription you got in 2016.

You’re only now noticing we address more than one topic a day? 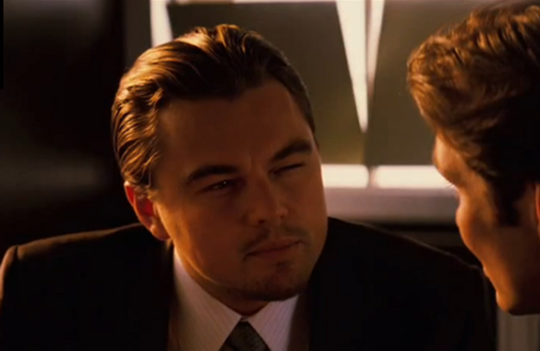 For the record, that’s the second double and the sixth winning play this week.

Yes, there’s more where that came from. But please note we can allow only 200 new members to the Daily Double Club each day. And even if we don’t reach that total today, this web page will go dark tonight at midnight.