NYC always bounces back… right? “No. Not this time,” says James Altucher, inveterate resident and lover of all things Big Apple.

While optimists argue: “NYC is the center of the financial universe. Opportunities will flourish here again.”

Or this: “NYC has experienced worse.” 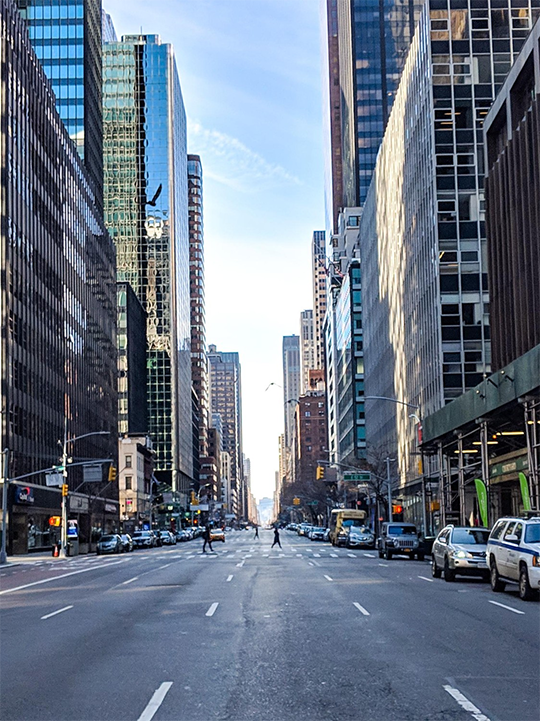 Open for business, but not exactly bustling…

“Even though people can go back to work,” James says, “famous office buildings like the Time-Life skyscraper are still 90% empty. [It] can handle 8,000 workers. Now it… has [maybe] 500 workers back.”

James continues: “Businesses have realized that they don’t need their employees at the office. In fact, they’ve realized they are even more productive with everyone at home.”

“In early March, many people (not me) left NYC [because] they felt it would provide safety from the virus,” says James. “They no longer needed to go to work and all the restaurants were closed. People figured, ‘I’ll get out for a month or two and then come back.’

“Then in June, during rioting and looting, a second wave of NYC [residents] (this time including me) left.

“I have kids,” he explains. “Nothing was wrong with the protests but I was a little nervous when I saw videos of rioters after curfew trying to break into my building.”

“Now a third wave of people is leaving,” James reports. “But they might be too late… Prices are down 30–50% on both rentals and sales [in NYC].

“And rentals are soaring in the second- and third-tier cities.” 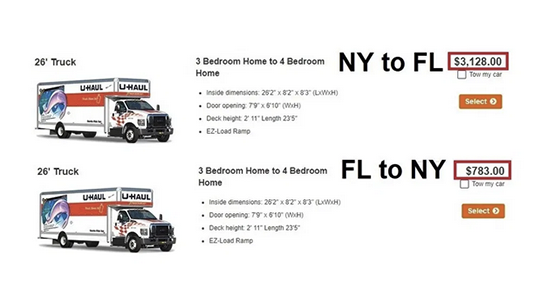 Sorta says it all…

“I’m temporarily, although maybe permanently, in south Florida now,” says James. And with the market so competitive, he says: “I… got my place sight unseen. The first time [I] physically saw it was when we flew down and moved in.”

So will Midtown Manhattan rise from the pandemic ashes? “It’s a death spiral,” James says, “the longer offices remain empty, the more likely they are to stay vacant for good. Businesses are remote and they aren’t returning to the office,” he concludes.

So the knock-on effect for commercial and residential real estate in NYC? Staggering…

James says: “If building owners and landlords lose their prime tenants (the storefronts on the bottom floor, the offices on the middle floors, the well-to-do on the top floors, etc.), then they go out of business.

“People who would have rented or bought say, ‘Hmmm, everyone is saying NYC is heading back to the 1970s, so even though prices might be 50% lower than they were a year ago, I think I will wait a bit more. Better safe than sorry!’

“And then with everyone waiting,” James says, “prices go down further. So people see prices go down and they say, ‘Good thing I waited. But what happens if I wait even more?!’ And they wait and then prices go down more.

“This is called a deflationary spiral,” he says. “People wait. Prices go down. Nobody really wins,” James says. “Because the landlords or owners go broke. Less money gets spent on the city. Nobody moves in so there is no motion in the markets.

The upshot? “People will go bankrupt and there will be litigation, which creates other problems for real estate in the area. And the big borrowers and lenders may need a bailout of some sort or face mass bankruptcy,” James says.

“And people already owning in the area who can afford to hang on have to wait longer for a return of restaurants, services, etc., that they were used to.”

And according to James, NYC’s cultural offerings are why people flock there in the first place. But unique restaurants, shopping and entertainment venues are closing in droves…

“The hot dog stands outside of the Lincoln Center?” James notes. “Finished. My favorite restaurant is closed for good,” he adds. “My second favorite… closed for good.

“Before the pandemic, the average restaurant had only 16 days of cash on hand. Some had more (McDonald’s), and some had less (the local mom and pop Greek diner).

“Yelp estimates that 60% of restaurants around the United States have closed,” James says. “My guess is more than 60% will be closed in New York City…

“What happens to all the employees who work at these restaurants?” asks James. “They left New York City… They are gone, and gone for good,” he says.

Restaurants aren’t the only small businesses affected by the pandemic banhammer either, and James has first-hand experience….

“One time, Henry Winkler stopped by to come on my podcast,” James says. “He was the one who told me it had been a theater.

“He said, ‘I grew up two doors down from here and used to perform here as a kid. Then I went out to LA to be the Fonz and now I’m back here, full circle, to be on your podcast. This place has history.’ 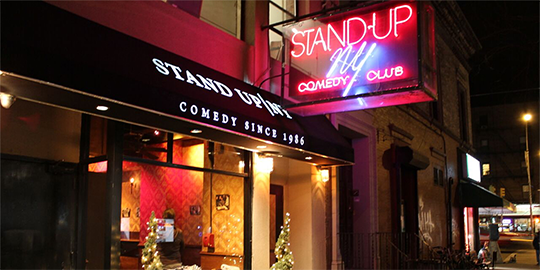 The last time the club was officially open? “We had a show in May. An outdoor show. Everyone socially distanced. But we were shut down by the police. I guess we were superspreading humor during a very serious time,” James quips.

Now? “The club is doing something fun: It’s doing shows outside in the park. That said, we have no idea when we will open,” says James. “And the longer we remain closed, the less chance we will ever reopen profitably.”

The same goes for Broadway, Lincoln Center and museums…

“Right now, Broadway is closed ‘at least until early 2021,’ and then there are supposed to be a series of ‘rolling dates’ by which it will reopen,” James says.

“But is that true? We simply don’t know. And what does that mean? Will it have to be only 25% capacity? Broadway shows can’t survive [on] that!” James emphasizes. 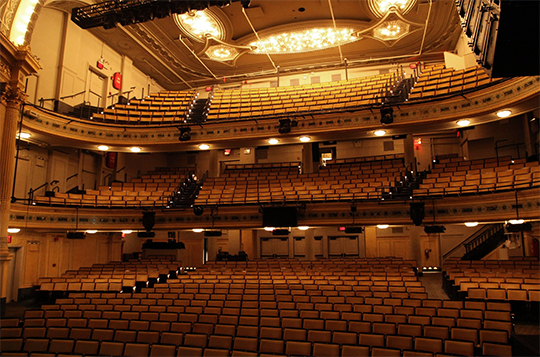 To say nothing of “the tens of thousands of jobs lost in these cultural centers” or “the millions of dollars of tourist-generated revenues lost by the closing of these centers.”

And then there’s something we hadn’t even considered: higher education that accounts for a near-city within the city…

“There are almost 600,000 college students spread out through NYC,” James says. “From Columbia to NYU to Baruch, Fordham, St. John’s, etc.

“Will they require remote learning? Will kids be on campus? It turns out: a little bit of both. Some colleges are waiting a semester to decide, some are half and half, some are optional.

“But we know this: There is uncertainty,” James says. “I don’t know of any college fully coming back right away.

“So in a semester or two it might be fine.” Right? 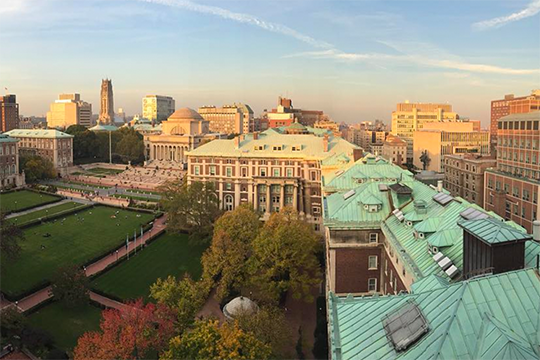 “That’s a lot of landlords who will not be able to pay their own bills. Many bought those student apartments as a way to make a living. So now it ripples back to the landlords, to the support staff, to the banks, to the professors, etc.

“In other words, we don’t know,” James says. “But it’s going to be a lot worse before it’s better.”

To James’ way of thinking, that applies to NYC as a whole…

“If you believe… NYC is resilient, I hope you’re right,” says James. “But this time is different.

“I lived three blocks from Ground Zero on 9/11,” James continues. “Downtown, where I lived, was destroyed, but it came roaring back within two years. Such sadness and hardship and then quickly that area became the most attractive area in New York.

“And in 2008/2009, there was much suffering during the Great Recession, again much hardship, but things came roaring back,” he says.

Here’s the difference: “NYC has never been locked down for five months,” says James. “Not in any pandemic, war, financial crisis, never.

“In the middle of the polio epidemic, when little kids (including my mother) were becoming paralyzed or dying… NYC didn’t go through this.

“This is not to say what should have been done or should not have been done. That part is over. Now we have to deal with what IS.”

“There won’t be business opportunities for years,” James says. “Businesses move on. People move on. It will be cheaper for businesses to function more remotely…

“And you can be just as productive, make the same salary, have higher quality of life with a cheaper cost to live.”

Speaking of which: “People will ask, ‘Wait a second, I was paying over 16% in state and city taxes and these other states and cities have little to no taxes? And I don’t have to deal with all the other headaches of NYC?’

“What reason will people have to go back to NYC?” That might be rhetorical…

“I love NYC,” James says. “When I first moved to NYC, it was a dream come true… So much personality, so many stories.

“I could play chess all day and night. I could go to comedy clubs. I could start any type of business. I could meet people. I had family, friends, opportunities.

“But the question now is: What happens next?

[Ed. note: Your editor today, for one, is pulling for NYC — one of the greatest cities in the world.

My father was born and raised in Washington Heights, and he moved his family back in the late ‘70s when the city was on the ropes. Still, I carry fond memories with me of ice skating in Central Park, exploring the American Museum of Natural History and checking books out at the New York Public Library.

But as bad as the near-bankrupt ‘70s were for the city, 2020 has been truly unprecedented… So here’s hoping — perhaps against hope — for an equally unprecedented turnaround.]

P.S. Amid pandemic turmoil, one thing that hasn’t changed is James’ favorite approach to trading…

His proven algorithm withstood the test of volatility in February and March… and has continued to rally since.

How does James’ system work? It takes advantage of a seven-day stock market glitch that allows everyday investors to walk away with profits like $4,250… $6,735… even $10,675… in about seven days!

Get all the details right here… but this message will be pulled offline on Wednesday, Aug. 19, at 9:30 a.m.