So the media’s done such a bang-up job reporting on the corona-crud that it has even less credibility than the president.

Gosh, maybe that’s because the media kept telling us that social distancing didn’t matter if you were gathering in a large protest — as long as the protest was for the “right” cause?

Anyway, we turn our attention to media malfeasance today. And yes, there’s a money angle. Read on…

At first, your editor did his level best yesterday to tune out the brouhaha surrounding “the Woodward tapes.”

As you’ve almost surely heard by now, Donald Trump consented to 18 recorded interviews with Bob Woodward of Watergate fame. The interviews make up the core of what seems like the 206th tedious “inside the White House” Woodward book, due for release next week. Excerpts began dripping out yesterday.

I avoided the coverage as best I could. It seemed like yet another dreary instance of the symbiotic — perhaps codependent? — relationship between Trump and the media. Trump craves attention, and the media can’t help but indulge him because he generates TV ratings and internet pageviews. No thanks.

But then came the developing controversy over Woodward’s conduct — which as a former journalist I couldn’t help noticing.

The big story to emerge so far is that Trump told Woodward in February that the virus was “deadly stuff” — deadlier than the flu. Then during a subsequent interview in March Trump told him, “I wanted to always play it down. I still like playing it down, because I don’t want to create a panic.”

It’s mildly interesting, this notion of Trump engaging in the “noble lie”… but very soon, it dawned on both journalists and news consumers alike that, gee, maybe Woodward should have, you know, said something at the time — rather than sit on the information in the interest of maximizing book royalties.

For instance, here’s the former D.C. bureau chief for BuzzFeed… 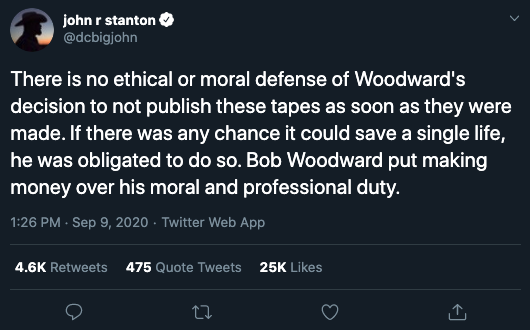 As yesterday wore on, Woodward felt enough heat that he agreed to an interview with Washington Post media columnist Margaret Sullivan.

As Woodward explained it, his motivation for withholding his scoop was not monetary – but, rather, in the service of a righteous objective.

The key paragraphs from Sullivan’s article…

Again, Woodward said he believes his highest purpose isn’t to write daily stories but to give his readers the big picture – one that may have a greater effect, especially with a consequential election looming.

Woodward’s effort, he said, was to deliver in book form “the best obtainable version of the truth,” not to rush individual revelations into publication.

And always with a particular deadline in mind, so that people could read, absorb and make their judgments well before Nov. 3. “The demarcation is the election.”

Translation: “If a few old folks have to die so Trump loses the election, the sacrifice is worth it.”

Really, how else can you read that?

Sick stuff. But not so surprising when you realize Woodward’s “journalism” ever since Watergate has been in service to the deep state. One book after another lauding both Bushes, Clinton and Obama. (Four of them on Dubya alone!) To say nothing of Maestro, his hagiography of Federal Reserve Chairman Alan Greenspan — whose Wall Street-friendly policies ultimately set us all up for the Panic of 2008 and the “Great Recession.”

And make no mistake, Woodward is well-rewarded for his efforts — far beyond book royalties.

As we noted last year, he routinely collects up to $70,000 a pop speaking to special interest groups — trade associations and whatnot that wield their lobbying power in the D.C. swamp.

Officially, the journalism profession frowns on this sort of “buckraking”… so Woodward justifies it by donating his speaking fees to a family foundation.

The foundation is a clever dodge: Tax records reveal Woodward’s foundation gave $600,000 to his alma mater, Yale University, between 2015–18 — a time that coincided with his daughter’s attendance there.

Nice work if you can get it…

It was 14 months ago when we began to expose how media elites and other connected insiders might be colluding with finance types on lucrative trades in the markets.

We also obtained access to a powerful data tool detecting these trades… and developed a system so you could ride the insiders’ coattails to big gains.

The results for our readers following this system have exceeded our hopes. Going back to mid-April, following these trade recommendations delivered 26 winners out of 30 trades total. And the average gain (including the losers) was 54.6% in 32 days.

Over the last three months, The Profit Wire has become our most popular options trading advisory.

We don’t want too many readers piling into the same trade recommendation at once. That creates distortions in the market that ultimately could lose readers money. Obviously that’s not what we want.

So we’re closing off access to The Profit Wire as of next Monday, until further notice. I’m sure you’ve seen this message before — you’re probably sick of seeing my mug behind that table by now — but it’s coming offline, forever, in only four more days. Here’s one of your last chances to get in before the doors close on Monday.

The major U.S. stock indexes are stalling out after yesterday’s monster rally.

But to the extent there’s any movement, the Nasdaq is once again leading the way — up a quarter percent as we write to 11,166. The S&P 500 and the Dow are both slightly in the red.

Looking back on yesterday’s action, “We did see some selling during the final 15 minutes of trade,” observes Greg Guenthner of our trading desk, “which could mean that the herd isn’t completely sold on this rally.

“Perhaps we have more volatility ahead as the market attempts to relieve some of the excessive bullishness built up over the summer.”

Gold continues perking up as the week progresses — up another nine bucks at last check to $1,955. Silver is two pennies away from $27.

It being Thursday, meanwhile, it’s time to check in with the little chart of horrors. First-time unemployment claims rang in unchanged from the previous week at 884,000… 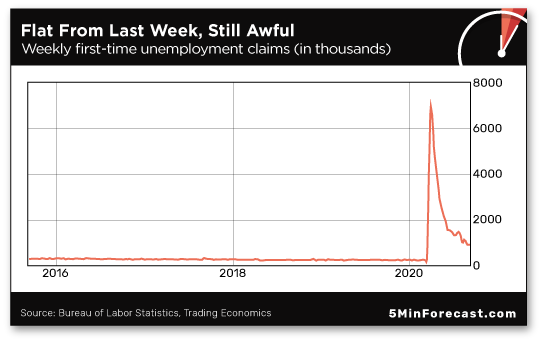 Elsewhere, trader chatter today includes a changing of the guard at Citigroup. CEO Michael Corbat will retire early next year, to be replaced by Jane Fraser. The media are spotlighting the fact she’ll be the first woman to run one of the megabanks. Yes, now it’s a woman’s turn to oversee a large-scale criminal enterprise whose derivatives book could blow up the entire financial system. Progress!

If Nikola Corp. doesn’t have the goods to deliver on the promise of electric vehicles — as our Ray Blanco boldly declared yesterday — who does?

By way of an answer, Ray poses a question today: “What’s the biggest thing holding you back from getting an electric vehicle?”

Answer: range and charging time. The typical Tesla, as an example, can go 200 miles between charges and takes a minimum 40 minutes to charge.

“Something has to change if EVs want to outsell their gas-guzzling brethren.”

But Ray sees game-changing battery technology just over the horizon. “Solid-state batteries are the next step in battery evolution.

“Solid-state batteries have a higher energy density by a margin of two–10 times the current rates. This means that the range of use drastically increases” — up to 500 miles in a recent prototype from Samsung. Meanwhile, charging goes six times faster. “That takes a 40-minute charge time all the way down to six minutes.”

Oh, and lower cost, too.

BMW, Hyundai and Toyota are all investing heavily in solid-state battery technology. Ray is keeping an eye on who’s benefiting most from those investment dollars, and how you can play it. Stay tuned…

Yeah, grab the popcorn. Ray might have been more right than even he thought!

And on a related topic… well, this one stopped us cold… 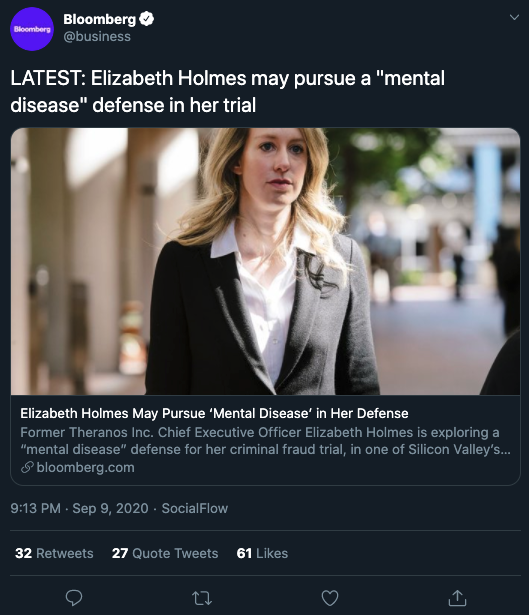 For years now, we’ve pondered the question: Was Theranos founder Elizabeth Holmes lying through her teeth about her company’s cheap and comprehensive blood test that would “change the world”… or did she believe at least some aspect of her own BS?

It turns out the answer is “neither” — judging from the defense her lawyers might be planning for her federal trial on criminal fraud charges.

According to a court filing yesterday, Holmes plans to introduce evidence of “mental disease or defect” or some other mental condition “bearing on the issue of guilt.”

It’ll be an uphill climb, former federal prosecutor Barbara McQuade tells Bloomberg: “Contrary to what you may see in the movies, an insanity defense in federal cases is rare and hard to fake.”

Not helping Holmes’ cause: The judge says if she wants to go there, she’ll have to submit to a psych exam by government experts.

Could be interesting: How, for instance, will each side spin Holmes’ deliberate emulation of the late Steve Jobs — right down to the black turtlenecks and vegan diet? (Hey, it worked — venture capital legend Marc Andreessen called her the next Steve Jobs!)

P.S. From a reader: “Dave, the way your intro at the top of The 5 and the Overtime were worded yesterday, I thought The Profit Wire itself was going to be discontinued.

“That shook me up until I read again more carefully. Have pity on us who may only have 4½ minutes (or less!) to read The 5.”

Apologies all around to any Profit Wire readers who got the wrong idea!

Reading between the lines, our correspondent sounds like a satisfied subscriber — especially with winners over the last several months like 51% on Under Armour… 102% on ConocoPhillips… and 129% on Alcoa.

As noted above, we need to move quickly now to limit the ranks of those subscribers and stay under a strict membership cap. Which is why we’re keeping the doors open only four more days, until next Monday.

This won’t be one of those situations where the sales promotion goes offline for a few days only to surface again. No, this really is it. This message really will disappear after next Monday — forever. Please, check it out while you still can.