Tesla’s Battery Day Event is now just about 24 hours away… but did Elon Musk already tip his hand about hotly anticipated battery technology on a shareholder call in July?

For starters — of the first-ever event — Musk himself says: “I think it [will] be one of the most exciting days in Tesla’s history,” something Dave teed up Friday.

But according to an article at CleanTechnica: “While there will no doubt be exciting showcase technology… Elon Musk has probably already revealed the main battery tech that will enable Tesla to massively scale its mission to accelerate the transition to sustainable energy (and transport).”

“The real limitation on Tesla growth is cell production at an affordable price,” Musk said at the time. “This is the fundamental scaling constraint.”

In other words, battery manufacturing is the most expensive, complex component of Tesla vehicles, making the vehicles more difficult to produce on a large scale… and less affordable than comparable gasoline-powered vehicles.

Stripping out demand for pickup trucks in the U.S. then — and “for a bit more color on what constitutes mass-market vehicle pricing,” the article continues — the best-selling vehicles stateside are the Toyota RAV4, the Nissan Rogue and the Honda CR-V.

In terms of price, here’s how these gas-powered vehicles compare with Tesla’s most-modestly priced vehicle, the 2020 Tesla Model 3… 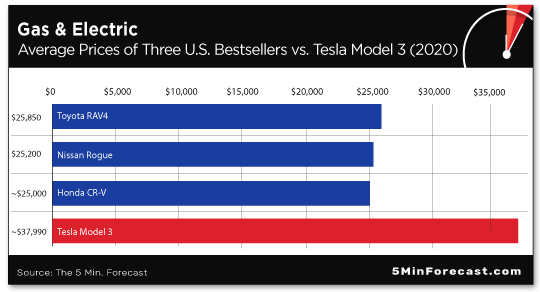 Certainly, one of the reasons canny buyers shop for an electric vehicle in the first place are the cost savings over the life of the vehicle, but “most consumers think about the costs in lump sum amounts, not in flow rates over time,” CleanTechnica continues.

“Despite the substantial lifetime savings, the upfront sticker price of EVs needs to come down to close to the above price points in order to gain higher mass-market appeal.”

The straightest path to more accessible price points for Teslas? It’s all about the battery…

To that end — and we’re nerding out a bit here — CleanTechnica speculates Tesla will be looking to lithium iron phosphate battery (LFP) technology.

“The short story is their relative cost,” the article says. “Mined nickel and cobalt mineral supply (for nickel-cobalt cells) is only available at a fraction of the scale of mined iron and phosphate supply (for LFP cells), and the former minerals are much more expensive.”

To give you an idea: “Nickel-cobalt EV batteries are already taking most of the world’s current cobalt supply, and, unless mined mineral volume can change very fast, will take most of Class 1 nickel too once EVs approach 20–25% of global auto market share (they will hit ~10% share in Europe this year).”

CleanTechnica notes: “The mineral supply squeeze is already setting a looming cost floor for how cheaply nickel-cobalt batteries can be made in the medium term.” Even from the most cost-efficient suppliers, “nickel-cobalt chemistries still work out around $100/kWh at the pack level…

“LFP avoids all these constraints due to the relatively huge abundance of the constituent minerals currently mined (iron, phosphate and, increasingly, trace manganese) and consequently the low mineral pricing.

“LFP has already reportedly achieved $80/kWh at the pack level, and still has potential to come down much further over time since it is nowhere near the mineral cost floor.” 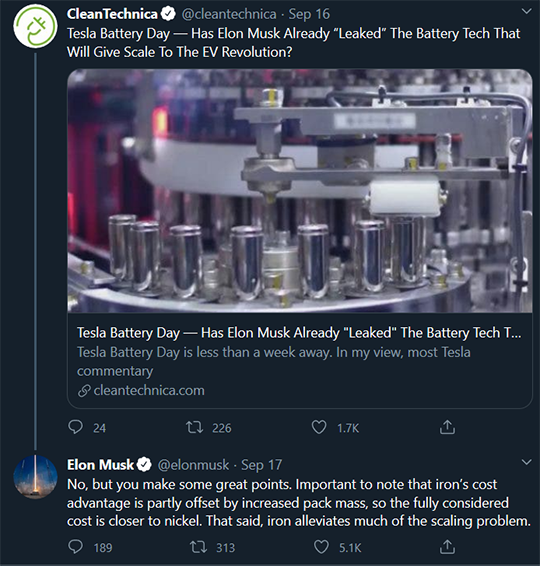 Heh… since Elon Musk doesn’t follow the dictum of never reading his own press, we have an answer. Of sorts… Intriguing.

According to world-class tech investor Ray Blanco — as important as cheap, scalable battery technology is – a battery’s lifetime might be the holy grail for Tesla and EVs in general. In fact, the media’s touting a “million-mile battery” announcement from Elon Musk…

“Just after 4:30 p.m. Eastern Time tomorrow,” Ray says, “Elon Musk is set to announce one of the biggest breakthroughs of the 21st century.

Meaning even “if this stock went up just $2 after they make the announcement, you’d double your money in a matter of minutes.”

So 24 hours ahead of Tesla’s big event — at 4:30 p.m. EST TODAY — Ray’s going to show investors all the smoking-gun facts indicating this $2-per-share company is staged for a phenomenal breakout.

“My goal here today is to help you get ahead of the crowd,” Ray says. “And get positioned for what could be the biggest and fastest gain of the year.”

While we commend the folks at BuzzFeed and the International Consortium of Investigative Journalists for pulling back the curtain on big banks and money laundering… this is news why?

We were under the impression criminal double dealing has been an open secret in the finance-verse, but hard data showing bank compliance officers red-flagged more than $2 trillion in transactions between 1999 and 2017 might hold water.

And according to reports investigators filed with the U.S. Department of Treasury’s Financial Crimes Enforcement Network — to continue the water metaphor — $2 trillion is just the tip of the iceberg…

Checking on bank stocks today, Deutsche Bank shares have dropped more than 7%; at the same time, JPMorgan’s down 4.4%. Goldman Sachs, Citigroup and Bank of New York Mellon? All down about 3%.

For more on making sense of the market, Graham Summers says: “We’ve had two prior periods of consolidation in the markets since the March bottom…

“Both of them lasted about four–five weeks… 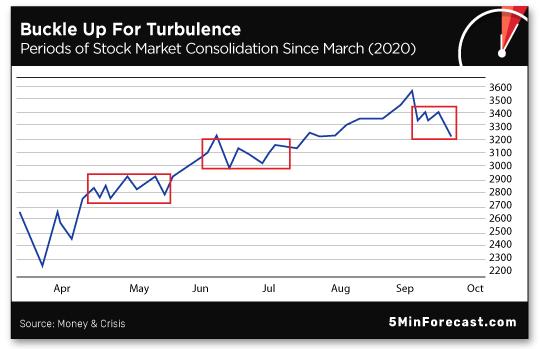 “This current consolidation is in its third week,” says Graham. “This would suggest we’ve got a few more weeks of chop before the market makes its next major move.

“From a political perspective,” he concludes, “this makes sense, as it would bring us into October, by which time the market would be accurately discounting the outcome of the upcoming presidential election.”

While the ramp-up in the price of gold has “fuelled a cash surge for miners, with top- and midtier producers holding roughly $5 billion in cash as of June 30… miners are hesitant to

spend on pricey projects and tap marginal deposits that require sizeable capital and take years to break even.”

In fact, seven out of 10 of the global gold miners — including heavyweight Newmont — “have cut planned output for the year by 7%, citing coronavirus-related shutdowns…

“The caution is a reversal from the 2011 gold price boom,” the newswire says, “which prompted buyers to overspend on acquisitions and led to billions in impairments when prices crashed in subsequent years.”

Filed under “Gold mining executives are their own worst enemy,” this is a phenomenon The 5’s been following along the way.

To wit, for every Rob McEwen — who built Goldcorp out of next to nothing — or Keith Barron — who founded the epic Fruta del Norte deposit in Ecuador, propelling shares of Aurelian Resources 9,000% in the early 2000s… there are 10 or 20 guys who wash out.

If they were a big company, they overpaid for acquisitions — think Kinross’ takeover of Red Back in 2010. And if they were a little company, they made future plans on the presumption of ever-expanding gold prices — i.e., the majority of junior miners going into the 2011 top.

Speaking of Kinross, the company just recently resumed paying shareholders a dividend, after suspending it in 2013 because the company so overpaid for Red Back.

All that to say: “Companies which have won back investor favor are fearful of making similar mistakes,” Reuters notes.

“The real trap in the gold industry in the past was chasing volume,” says Newmont Chief Executive Officer Tom Palmer. And Joe Foster of VanEck Associates Corp. — that anticipates gold $3,000 — says: “[Miners] still need to take a very conservative approach.”

In a Money Under 30 survey of 1,000 adults born between 1981 and 1996 — Gen Y or, more pejoratively, millennials — almost half admit parents pick up the tab for some of their monthly living expenses… 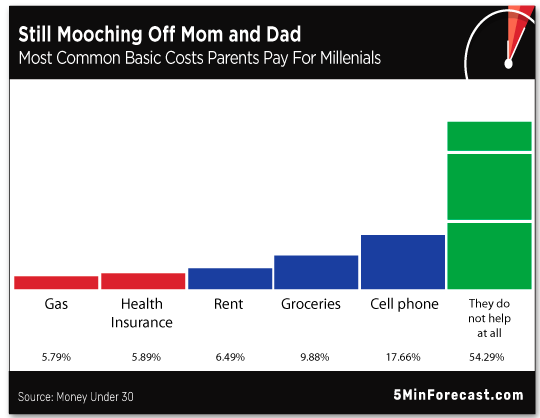 The study finds “millennials are struggling… due to a variety of factors,” says Fox Business, “including their lower salaries, a high cost of living, the need to save for the future and trying to pay down their monstrous student loan debt.

“In fact, 80% of those surveyed said they anticipate achieving their material goals much later than their parents did.”

If you relate, reader… or are ponying up for a millennial in your life, let us know…

P.S. “Once I reveal this research to you,” says Ray Blanco, “I’m pretty sure you’ll be convinced that this $2 company is the key to Tesla’s million-mile battery.

“I believe that knowing this information ahead of Elon Musk’s big announcement next Tuesday could allow you to potentially double your money in a matter of minutes — and 10X your money in the coming three months.”

Why is Ray so sure?

Ray’s all set to reveal three “smoking guns” he believes predict a partnership between Tesla and this $2 company.

Join Ray for his virtual presentation TODAY at 4:30 EST… To learn how, click right here.