Apple Inc. entered this morning’s trading down 16% from its all-time high set at the beginning of the month. Microsoft took less of a hit — a little over 10%.

By and large the story’s the same for the rest of the MAGA stocks (Google and Amazon) plus Facebook.

You don’t have to look far to find mainstream stories asserting that either 1) money is leaving these stocks for other sectors or 2) money is leaving stocks altogether and the broad market is set for a huge tumble.

This morning we introduce a third possibility: These stocks have been taking a September rest before resuming their epic run-up. 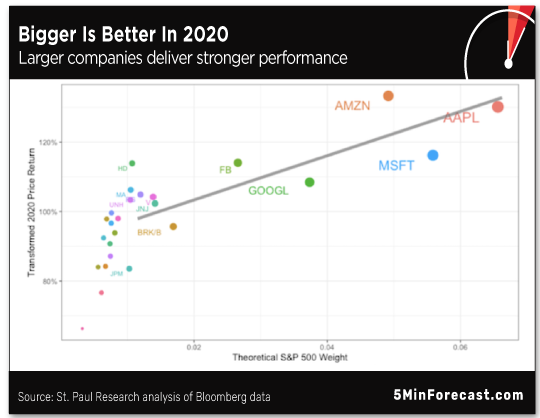 Go figure: By and large, the bigger the company, the stronger the performance. “If you focus on stocks that make up 1% of the S&P or more,” says Jonas, “the relationship is crystal clear — it’s a straight line.”

The reason comes back to something that three years ago we cheekily labeled the “attack of the passive robots.”

As a reminder, “passive” investing means you’re simply tracking an index like the S&P, usually using an ETF. That’s in contrast to “active” investing, where you’re trying to beat the market.

“As of March 2020,” Jonas tells us, so-called passive funds make up about 48% of all investments. In other words, half of all investors are betting that they can’t beat the market! It’s the highest that number has ever been — and it’s trending higher, driven by 401(k) plans and robo-advisors.

“One side effect of passive investing is that a bigger share of each investment dollar goes to bigger stocks. That’s at least part of why the returns of the largest stocks in the market in 2020 are perfectly correlated with their representation in the index.”

So what does that mean as September turns to October?

For one thing, “September’s tech sector tumble is likely to be a buying opportunity, at least in the near term,” Jonas ventures.

“I know lots of investors are nervous about the correction stocks experienced this month, but the dominance of passive investments this year suggests that it’s more likely to be a buying opportunity than the first sign of trouble.

“While the passive trend isn’t new, it’s being exacerbated right now by aggressive asset inflation from the Fed. That’s why big stocks have surged so much in 2020. And the Fed isn’t showing any signs of taking their foot off the gas.”

But even more important, “it means incredible opportunities in smaller tech stocks,” Jonas says — “especially the ones that aren’t included in passive indexes.

“More investors on ‘autopilot’ necessarily means fewer eyes on what’s going on in smaller companies, where old-fashioned boots-on-the-ground research is the only way to value what a stock is worth.

“Wall Street is fixating on huge stocks right now. And they’re probably going to leave a lot of money on the table as a result.

“Simply put, the data suggest it’s an exciting time to be an investor. And there could be a lot more to 2020’s rally than most folks realize.”

“More to the rally” might be getting underway already.

Precious metals have begun reclaiming some of last week’s losses. Gold is up to $1,869 and silver is back above $23.

No economic numbers or earnings reports of note today… which means trader chatter is focused on the president’s tax returns, reported this weekend in The New York Times.

From where we sit, the biggest takeaway from Donald Trump’s tax returns is the dog that didn’t bark — a Russian husky, to be precise.

You have to imagine the Times writers and editors were crestfallen when their story had to acknowledge: “Nor do they [the filings] reveal any previously unreported connections to Russia.”

Heh… Everyone from conservative columnist George Will to Senate Minority Leader Chuck Schumer had suggested for years that Trump’s tax records would turn up some sort of compromising Russian link — and the reason Trump kept them under wraps was to hide that link. 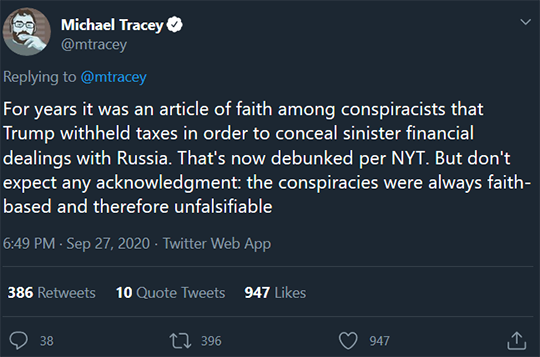 We’ll leave it to others to discuss whether the documents reflect the savvy of Trump’s tax advisers in harvesting losses… or the ineptitude of Trump himself in generating those losses… or the oddities of how the tax code treats real estate investments. It’s the continued bad faith of the media-pundit class we wish to spotlight this morning.

Speaking of the president and Russia, the following scoop got completely lost this weekend in the commotion over his tax returns…

John Durham is the special prosecutor who’s been looking into the origins of Russiagate. Ever since his appointment last year by Attorney General William Barr, Trump fans have held out hope that the investigation would end with someone like former CIA Director John Brennan being frogmarched into federal court for spying on the Trump campaign.

It would have been one heck of an October surprise — with potentially huge impact on the markets. But if the sources of Fox Business anchor Maria Bartiromo are to be believed, it’s not happening.

No surprise if you read our episode from July 24 of last year, titled “The Fix Is In (‘Spygate’).” We spelled out the deep-state bona fides of both Barr and Durham — covering up Iran-Contra, Ruby Ridge and CIA torture. At best, they would find a low-level patsy to take the fall. Meanwhile, Brennan retains his cushy gig as an “analyst” for MSNBC.

Even the fashion industry has had to change with the times… 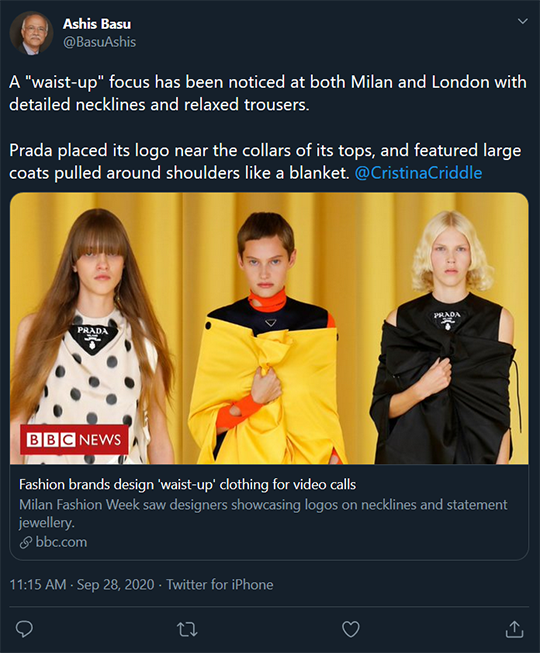 Figures from Boston Consulting Group point to a 35% drop this year in sales of luxury fashion.

Thus, “fashion labels are designing outfits for video calls during the coronavirus pandemic,” reports Cristina Criddle for the BBC. “A ‘waist-up’ focus has been noticed at both Milan and London Fashion Weeks, with detailed necklines and relaxed trousers.”

Hence the rather, uh, prominent placement of those Prada logos. "Moving the logo up to the neck is a good way of keeping your brand out there and making a fashion statement," says Deborah St. Louis, founder of Fashions Finest.

Hmmm… Your editor is reminded of his broadcast news days, which began during a time before TV anchors stood in front of giant video walls. Instead they were seated behind a desk. Especially on weekends, more than one anchor was known to be all business from the waist up… but otherwise in shorts and sandals. 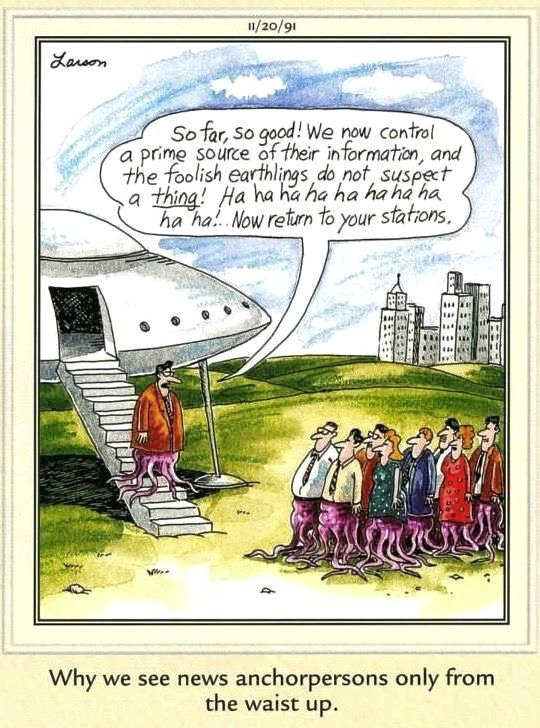 We opened up the mailbag this morning and noticed a disturbing trend.

After some discussion late last week about the prospect for coronavirus vaccines, we heard from several people citing one or another statistic to make one or another case about the severity of the disease, or lack thereof.

We noticed a similar spike in such reader emails back in March as the lockdowns began taking effect.

Please don’t take this the wrong way if you’ve written us one of these emails over the last six or seven months — we know you’re sincere and well-intentioned — but one of the most annoying things about the pandemic this year is how it’s turned half the people on the internet into armchair epidemiologists.

But the amateurs were and are working with the same alarmingly incomplete data set as the so-called experts. The problem with nearly every percentage related to this outbreak is that either the numerator or the denominator is wonky. In some cases, both.

That’s why we’ve kept our focus instead on the incompetence of the “professionals” who are supposed to know better.

Like when the WHO said on Jan. 14 there’s “no clear evidence of human-to-human transmission.” Or when Dr. Fauci said on Feb. 17 that the risk posed by the virus is “just minuscule.” Or when the surgeon general tweeted on Feb. 29, “Seriously people- STOP BUYING MASKS!”

In retrospect, the lockdowns are looking like the public health version of Dick Cheney’s “one percent doctrine.”

In the post-9/11 years, the U.S. government embraced the notion that if there’s a mere 1% chance a foreign actor or actors wish to cause serious harm to U.S. citizens or “interests” somewhere in the world, then the government is obligated to marshal all available resources to eliminate that actor or actors.

The possibility of second-order effects or unintended consequences? It never enters the discussion.

That’s how you end up with as many as 1 million dead Iraqis in pursuit of nonexistent “weapons of mass destruction.”

And so it wasn’t until late last month that The Wall Street Journal felt safe in putting a lengthy story on its front page by chief economics commentator Greg Ip that said, “The evidence suggests lockdowns were an overly blunt and economically costly tool.”

P.S. This message goes offline temporarily at midnight tonight. It will go offline permanently in a few more weeks.