If you’re unfamiliar, we turn to analyst Jonas Elmerraji who says: “Special purpose acquisition companies, or SPACs, are publicly traded stocks with no actual business operations that exist for the sole purpose of taking other companies public.”

And there’s been a proliferation of SPACs this year: 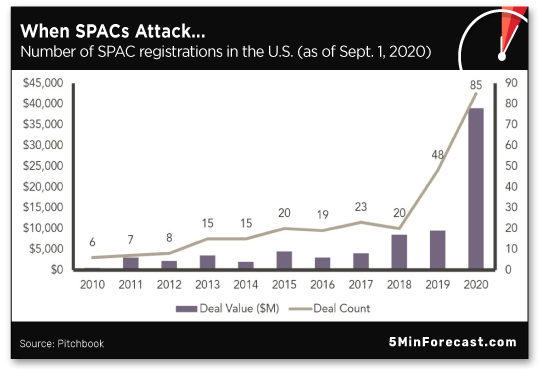 As for the mechanics of these companies, Jonas explains: “A SPAC goes public, full of investor cash and looking for an attractive privately held business to take public.

“Typically, a SPAC looks for an acquisition… with some kind of theme — it might be electric vehicles, space tech or cannabis.” (Even before a SPAC goes public, mind you, it might have a singular target acquisition in mind… but it’s not required to disclose that information.)

Here’s the rub: “Once [a SPAC] is publicly traded, the clock starts ticking. In a typical arrangement, the SPAC has two years to make a deal or return its cash to investors.”

So why is 2020 the year of the SPAC… and what does it mean for everyday investors?

“[SPACs] opens new opportunities for retail investors,” Jonas says, “by bringing companies public that would have only been available for venture capital firms or private equity investors previously.”

The consolidation into Big Tech stocks, for example, has been disastrous for companies outside the sector. The upshot? “Today, there are about 25% fewer small-cap stocks on the market than there were in 1995,” Jonas notes.

The vanishing companies? According to Morgan Stanley, 90% are small- and microcap stocks. “Part of the reason is that it’s a pain to go public,” Jonas says. “Companies would rather turn to venture capital investors to raise cash than go through the IPO process and pay big fees to Wall Street.

“Going public through a SPAC relieves some of those pain points,” he says.

Now with almost double the number of SPACS on the market in 2020 versus last year, “we’ve seen some big wins from SPACs,” Jonas says.

For your perusal, here’s a list of 11 other SPACs that have already announced targets… 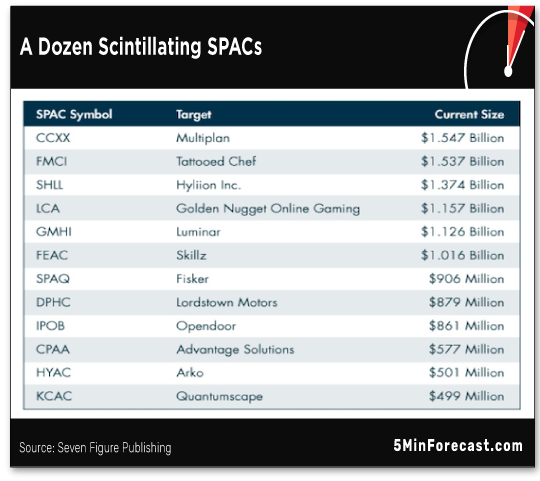 Next up, we give the floor to our tech-investment pro Ray Blanco who says the summer of 2020 proved to be the ideal petri dish for SPACs’ growth (perhaps that’s a bad analogy, considering the corona-crud… but we’re going with it).

“SPACs have been around since the ’80s,” Ray says, “but it’s only in the past couple months that they’ve really taken off.

“There were several [contributing] factors,” he says, one being the proof of concept in 2019 when Richard Branson announced space tourism company Virgin Galactic (NYSE: SPCE) would go public with the help of a SPAC.

And not to extend the space metaphor — but why not? — SPCE shares have broken through Earth’s atmosphere this year.

[Ray’s too modest… and not taking nearly enough credit for his SPCE recommendation via a SPAC. He later urged his readers to sell a portion of the position for 250% gains in February.]

Another piece of the SPAC puzzle: “The markets from March until most recently have been incredibly bullish,” Ray says. “Investors had a lot of extra liquidity to throw around at smaller, more explosive investments.

“SPACs offered… a perfect way to do this.”

For investors, then, the question is: “How do you sort the good SPACs from the bad ones?

“There are really two major things that you should look for when you’re evaluating a SPAC,” Ray says. First, who is managing the SPAC… and next, which private company is in its crosshairs?

“Remember, the SPAC won’t have a history,” Ray says, “but those who run it should have some sort of record that you can look up. See if they have a good track record.” If not, run… don’t walk.

“Next, if they have targeted a company to merge with,” Ray says, examine the company’s fundamentals. “Base this on how you would invest in any [other] stock.

“If you’re more aggressive, look for hot tech startups that have new, innovative ideas,” Ray continues. “If you want to play it safer, there are always solid, vetted private companies that can use SPACs to get onto the market.”

If you’re from the Northeast, for example, you’re undoubtedly familiar with snack food-maker Utz Brands. “Utz has been around for nearly 100 years,” says Ray, “and just decided to go public via a SPAC this past summer.”

As the fourth-largest snack food distributor in the U.S., “nobody’s questioning whether Utz is a real business,” Ray says. In other words, a safe play…

“If you aren’t sure how to evaluate SPACs or need to get more information about the company, I would suggest talking to your broker or financial adviser directly,” Ray says. “A lot of times, they are able to give further analysis on the SPAC itself and know what to look for when evaluating a company.”

Drilling down further for analysis of one up-and-coming SPAC, we turn to editor Bob Williams of Future Wealth…

“As our team’s resident futurist,” Bob says, “a SPAC that I’ve been tracking very closely over the last few weeks [is] Graf Industrial Corp. (GRAF).

“This particular SPAC has been in existence since October 2018 and was formed by SPAC veteran James Graf through an offer of 22.5 million units at $10 per share.

“For 20 months, GRAF quietly traded around the offer price,” says Bob. “But in July, the company announced that it had decided on a target — a merger with Velodyne Lidar Inc.

“On news of the merger,” he continues, “shares rocketed above $20… and then above $30 by early September, grabbing my full attention along the way.”

As for the technology itself, Bob explains: “Put simply, lidar gives driverless vehicles their ability to ‘see’… Velodyne is a leader in ‘solid state’ lidar for autonomous vehicles.”

And coming in one month under Graf's two-year SPAC deadline to confirm a deal with a private company, shareholders approved the Graf-Velodyne merger just this week.

Prior to Wednesday’s shareholder meeting, Bob said: “I love Velodyne’s lidar technology… I value its manufacturing agreements with Ford and Mercedes… its revenue is projected to grow (from $100 million this year to $680 million in 2024)… and it’s signed 16 multiyear contracts.”

In other words, the opportunity is immense, and as for the sector as a whole…

“I believe that lidar will be the most important breakthrough of the decade,” Bob says.

“In fact, I devoted the entire September edition of my premium newsletter, Future Wealth, to lidar technology and my bold prediction.

“And since I’ve also predicted that America’s driverless infrastructure platform — a vast network of embedded chips and sensors — will become one of mankind’s greatest achievements ever, you can imagine my interest in Graf’s decision to pursue Velodyne.

“Considering that solid-state lidar has tons of other useful applications, too — like giving robots 360-degree vision — I don’t believe the technology’s importance can be understated,” Bob says.

[For access to Bob’s leading-edge research, including the name and ticker of one of the BEST stocks you can buy right now — a recommendation that’s 100% free — click right here.]

For the major economic numbers of the day…

September’s ISM Manufacturing Index shows PMI at 55.4%, down 0.6% from August. If you recall, a number over 50 indicates expansion of the manufacturing segment of the economy.

And personal income fell 2.7% in August from a month earlier, according to the Commerce Department — a decline almost entirely chalked up to shrinking unemployment benefits.

“Consumer spending has continued to grow,” The Wall Street Journal says. “Households stepped up outlays on goods and services by 1% in August from a month earlier.” Nothing, however, compared to earlier in the summer…

Core PCE Price Index — the Fed’s preferred inflation gauge — ticked up to 1.6% in August from 1.4% in July… higher than the estimated 1.4%. Still nowhere near the Federal Reserve’s 2% target, but it’s been rising steadily.

“Yes, Americans will give up liberties to fight the coronavirus,” says a Washington Post headline.

The article goes on to cite results of a survey that questioned 12,000 Americans about their willingness to eschew certain freedoms in an effort to stamp out the virus. The results? 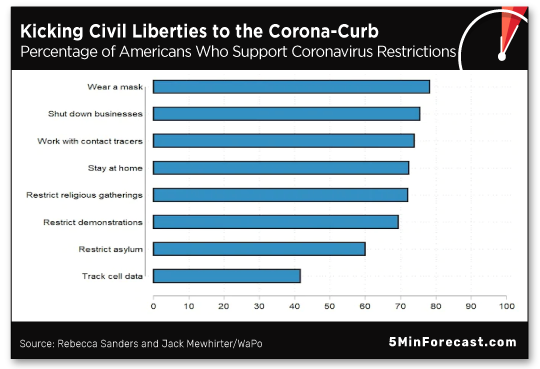 According to the article: “Respondents overwhelmingly and consistently agreed the government should be able to place restrictions and requirements on businesses and people to protect public health.”

And figures are largely in line with a chart featured at The 5 about five months ago… a chart we titled: “They Loved Big Brother.” Heh… that’s clearly not the way WaPo sees it.

“Way to go, Dave!” a reader says. “I appreciated your reasoned response to Mr. MD…

“I tend to agree with most of your analysis, but I want to add something to your point. Everyone is tossing around the numbers of COVID deaths as if they are gospel truth, and they are emblazoned across CNN every day to make us believe as much.

“However, my RN wife — who works for an insurance company doing case reviews — is the first to point out how inaccurate these numbers really are. She sees it daily. Anyone who tests positive for COVID but is already on death’s door with underlying comorbidities is labeled as a COVID death regardless if that was the cause or not. She sees the inflated numbers every day.”

The 5: Thanks for some real-world context… We’ll be back tomorrow.

P.S. For more real-world context, we turn to Ray Blanco who says: “Over the weekend, I was at a motorcycle dealership and chatted with the finance manager.

“The business manager told me his father runs a big multistate assisted living/hospice business. He’s been doing it for over three decades so he knows what the numbers are.

Make of that what you will…